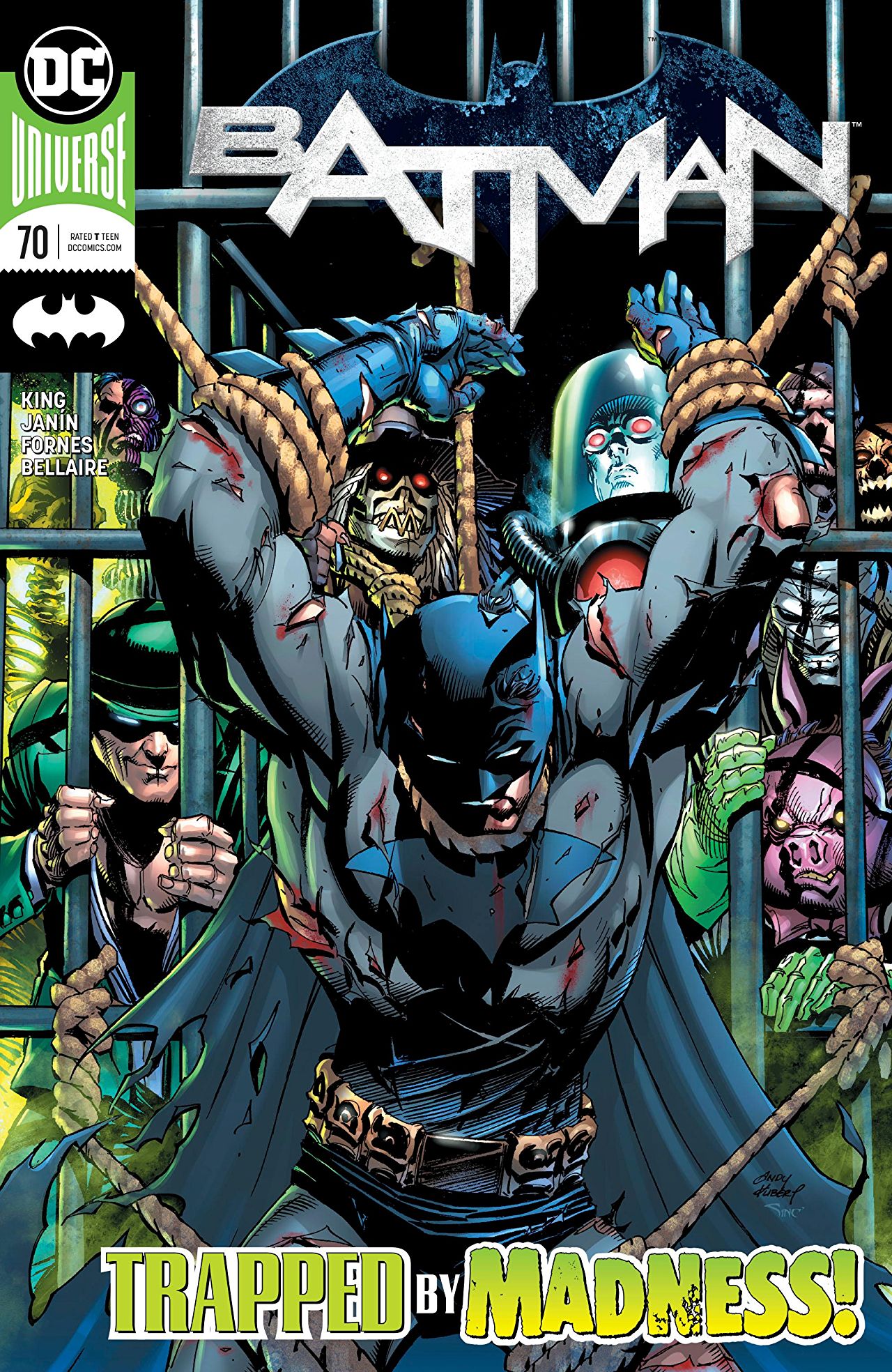 Overview: Batman awakes to find himself in the basement of Arkham Asylum. The only thing between him and freedom is every inmate in Arkham.

Synopsis (spoilers ahead): The issues opens with Maxie Zeus reciting a poem as Batman flashes through the various “Nightmares” that he was subjected to before ripping himself free of the devices that were holding him prisoner.

Batman is confronted by the Riddler, who offers to explain to him what is going on if he answers his riddle. Batman drives his knee into the Riddler’s face and walks past him as he answers Nygma’s riddle. Batman then comes across Calendar Man who offers no fight and simply mimes shooting himself in the head as he remarks that Batman and Bane are locked in an unending cycle.

Batman then faces off against various villains such as Killer Croc, Hush, and Mad Hatter as he shouts to Bane, mocking Bane’s failed attempt at breaking him, screaming that he can’t be broken with nightmares because Batman is the nightmare. Batman then runs across Mr. Freeze and takes him down as Freeze struggles to get out a single word. Meanwhile, the Ventriloquist updates an off-panel Bane on Batman’s progress in escaping which seems to please Bane.

Batman next runs across Scarecrow, who appears dumbfounded on the lack of effect his gas is having Batman as Batman takes him down. Batman next faces the tag team of Solomon Grundy and Amygdala, cracking his knuckles and going to work, as the next panel shows Batman getting to his feet, laughing as both heavyweights are put down for the count.

Batman then finds Two-Face, who he gives a message to send to Bane that he will return with his army to speak with Bane before Batman escapes from Arkham Asylum, as Zeus finishes his poem.

Analysis: After the last more cerebral story arc, writer Tom King brings us what is on the surface a very action heavy issue that one would think would be there to serve as a counterbalance to the previous issues. After reading this issue, there is a surprising amount to unpack for such a quick issue.

The issue is bookended by Maxie Zeus reciting poetry. In the beginning, Zeus is quoting from “The Argument” from “A Marriage of Heaven and Hell” by William Blake, which was Blake playing with the imagery of “Paradise Lost” by John Milton and the idea that the concepts of angels and demons are both necessary parts of life. I can’t help but wonder if this poem is what Tom King had in mind when he was planning out his overall run on Batman. King’s stories have, overall, been a meditation on the question of whether Batman can, indeed, be Batman, and be happy. I think that this work by Blake might serve to be Tom King’s answer to that question. That Batman needs both the demons of his pain and anger and the angels of the people that he cares about to be the hero that we know Batman to be. Batman comes to terms with the fact that he loves Selina Kyle and wants to be happy with her and in the lead up to the events of Batman #50, we see a relatively happy Batman that is effectively handles multiple threats while having a loving relationship with someone he can come home to at the end of the day. Following Catwoman leaving him, Batman makes questionable judgment calls with Freeze, his surrogate son has been taken from him causing Batman to leave the man responsible for dead, Batman alienates his closest ally, Gordon, and finally finds himself captured and tortured with his innermost demons. King is showing us how a broken heart is slowly unraveling Batman and how being confronted by his pain isn’t helping him, I think it’s about to make things worse.

I think it’s important to look at the tone of this story. There is no sense of triumph throughout the story as Batman frees himself and opens up a barrel of whoop-ass on his rogue gallery. Batman increasingly relishes in the violence that he dishes out as he becomes “the nightmare”. The exchange between Ventriloquist and Bane is very telling, as Bane appears to have left very specific instructions as the order in which Batman faces off with his rogue’s gallery in this story.   I’d like to also acknowledge fellow TBU columnist Ian Miller (also my new cohost of the upcoming TBU Cold Case Files podcast) for pointing out that Batman faces off against the villains in this issue in the exact opposite order that Bane faced off against the same villains in the “I am Bane” storyline.

In the issue’s final moments, as Batman proclaims that he will be back with his “army” to face off against Bane, Zeus recites another poem from the Hell section of Dante Alighieri’s “The Divine Comedy” ending with the line “abandon all hope ye who enter here” which is famously the sign that hangs over the entrance to Hell in Milton’s story.   I think Batman is about to figuratively enter his own hell. I think that we are about to see that Bane has, by having him consumed by rage and sadness, in effect, broken him and I don’t think that Batman’s declaration of war against Bane at the end of the issue is going to go in his favor.

I enjoyed the use of Batman’s rogue’s gallery in this issue, particularly a Mr. Freeze who is “frozen” with fear at this more brutal Batman, which builds nicely on King’s use of Mr. Freeze in Batman #51-53. I also have to hand it to this book as I also think that the Ventriloquist has never been creepier, as he is a character that is usually relegated to being the boring half of Scarface and his use here is refreshing.

The only drawback to this issue is that, I think, like a lot of Tom King’s work, reads far better in a collected form then it does in a single issue and I think that you really need the context of reading it as part of the larger story to get what King is going for in the story, and as a result, this isn’t a title that gives an easy entry point to new readers.

Mikel Janin and Jorge Fornes share the art duties in this book. While I understand that this is probably a necessary function of getting this bi-weekly title on the stands on time, because of the straightforward nature of what is essentially a prolonged action sequence, the change in art styles is jarring. Don’t get me wrong, both artists put in solid work here, but in a perfect world, I would have preferred that either of these artists handled the art chores for the whole issue. A special shout-out to the Andy Kubert Batman cover, who I think is well overdue for another shot at doing interiors in a Batman project.

Final Thoughts: I’ve always disagreed with the notion that Batman is some crimefighting engine that is fueled by his personal demons and pain. I think that there is mounting evidence that Tom King agrees with me.   I enjoyed this issue and I’m looking forward to seeing things go from bad to worse. I think that it is worth pointing out that we are nearing the three-quarters mark in Tom King’s proclaimed one hundred issue story arc and I think it is pretty clear that things are about to go from bad to worse.