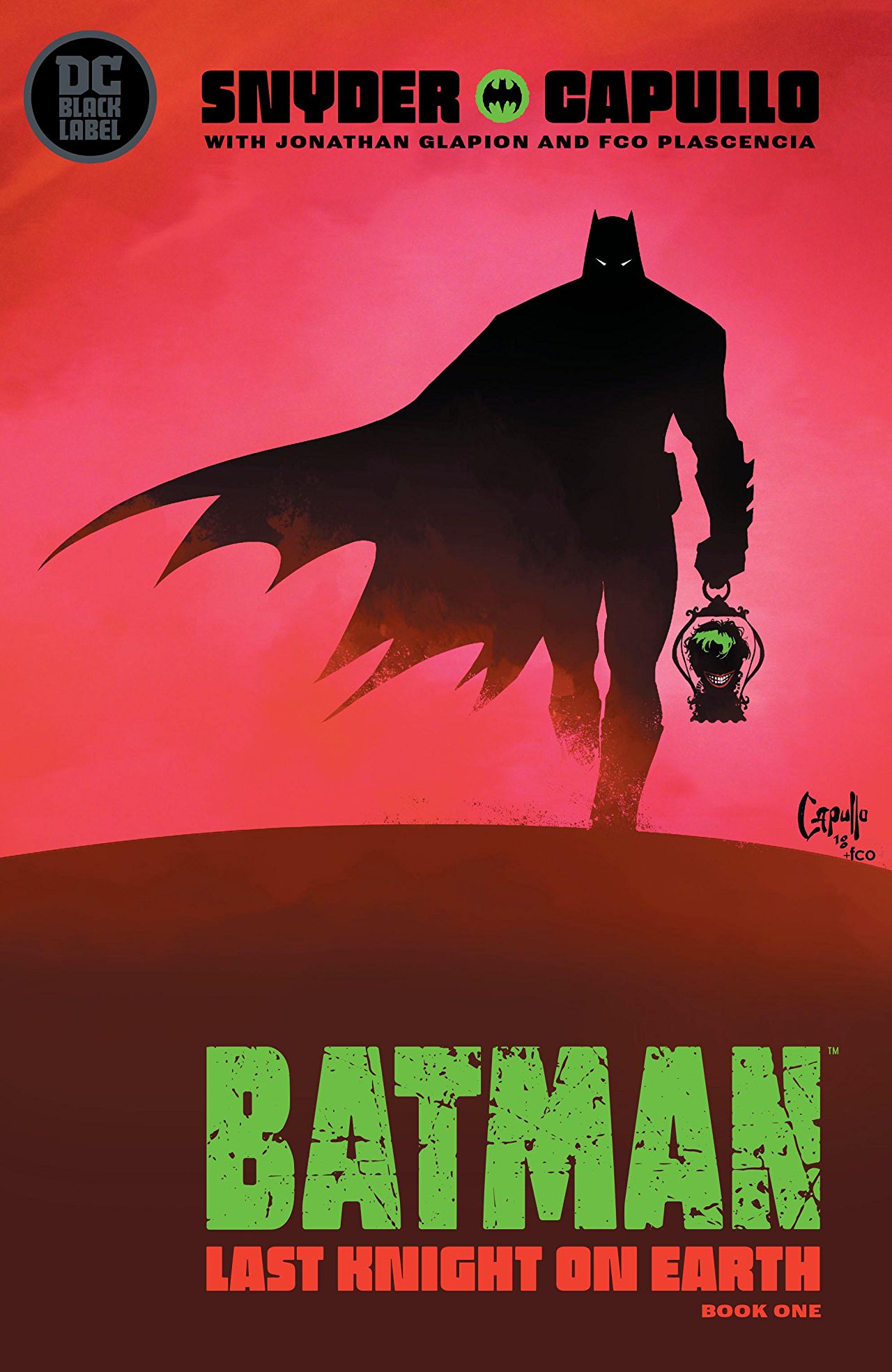 Overview: Batman tries to get his bearings in a post-apocalyptic world with nothing but an old Batsuit and Joker’s talking head in a jar to help him.

Synopsis (spoilers ahead): Batman drives to a pseudo-crime scene in the Batmobile.  He finds a boy kneeling under an umbrella.  As Batman peers under the umbrella, he discovers that it’s a corpse posed in that position by some mechanical device.  The device activates and the boy raises his arm holding a gun and appears to shoot Batman in the face.

Bruce wakes up strapped to a bed and being attended by a Dr. Redmund Hudd.  Dr. Hudd tells Bruce he’s been his doctor for the past twenty years that Bruce has been at Arkham Asylum.  Dr. Hudd introduces Bruce to Alfred who he says has waited patiently for years to meet him.  Alfred tells him that no one blames him for the night where he killed his parents in the alley.  Bruce freaks out and Alfred tells him to stop and take a look around at the hospital staff.  They all bear a striking resemblance to Batman’s villains and Alfred explains that Bruce has been casting them in a drama that only exists in his own head.  The doctor applies a sedative and the next time Bruce wakes up is in a padded cell.

Days later, Alfred meets with him at Arkham and Bruce asks why he has the skills that he does if Batman is all fake.  Alfred has answers prepared for him and shows him that what is supposedly the cowl, is actually part of a shock therapy restraint bridle that is attached to a straightjacket.  Bruce gets a determined look on his face and says he needs this suit.

Wearing the cowl and straightjacket, Bruce tries to fight his way through Arkham and takes gear off people as he goes.  Alfred eventually confronts him, Bruce says he has figured everything out and asks Alfred why he did this.  Alfred reveals that he created this illusion because the world doesn’t exist anymore and so that he could be free of Batman.  Bruce turns off the digital mask attached to Alfred’s face to reveal that Alfred is much older than he initially appeared.  Bruce says he can’t stay in Alfred’s carefully constructed world but asks Alfred to come with him.  Alfred says he can’t but asks to hug Bruce one last time.

Batman emerges in the middle of the desert and notices a lantern stuck in the sand.  He turns it around and notices that the Joker’s head is inside.  Despite not having a body, the Joker can talk but doesn’t remember how he got there.  As a speed force storm races across the sky, Batman decides to grab the lantern and begin the walk to Coast City.

Upon arriving, Batman notices the Green Lantern central battery has crashed on Earth and Joker explains that Mogo has been drained by Brainiac.  Green Lantern rings are now claimed by whoever happens to find one which means that people without sufficient willpower to wield a ring can get one.  A few of these people attack Batman with constructs of giant babies.  As Batman evades their attacks, the constructs are attacked by an invisible tank.  The person inside the tank, who happens to be Vixen, pulls Batman inside.  The tank is being driven by Poison Ivy who appears to recognize Batman as the real Batman because she punches him with a branch.

Bruce is handcuffed in a secret base by a group of Amazons that include Supergirl, Ivy, Vixen and Donna Troy when their leader returns.  She removes her helmet and reveals herself as Wonder Woman.  She recognizes Bruce and tells him that he was the one to kill the world.  Diana explains the nature of the hideout as well as how the heroes lost.  Luthor had made a convincing pitch to the people and they chose they didn’t want heroes or villains anymore.  The people killed most of the heroes and villains and a powerful new entity named Omega has taken over.  Bruce explains that Alfred told him that he’s a clone the original Bruce Wayne created using one of his inventions.

Bruce says they must continue fighting and explore the rumors of Clark’s survival.  Wonder Woman says it’s over and that Omega is someone from Gotham who is likely one of Bruce’s disciples.  She tells Bruce that she saved a Batsuit for him and invites him to come with her when she takes all the survivors to Hades the following day.  Diana asks him to sleep on it and give an answer in the morning.

Bruce takes the suit and the Joker lantern and leaves before first light.

Analysis:  Wow, what a fast-paced start to this story!  Readers who have read Snyder and Capullo’s run on Batman and more recently Snyder’s Justice League run, will no doubt appreciate the connections to this story.  While I think that may lead some people to explore questions of continuity and this story’s place within or outside it, I do not think it detracts from the story here at all.  It is also not necessary to have read Snyder’s Batman or Justice League books to enjoy this story as everything is explained.

The story itself does something I do not recall ever having been done before.  A fundamental assumption all superhero stories make is that we the people are worth saving.  We’ve seen heroes fall and lose faith in humanity, but it’s always portrayed as that character giving up or giving in to darkness.  I don’t think we have ever seen a story where the people turn on the heroes of their own free will to such an extent that they destroy the world.  People “choosing doom” as Wonder Woman describes it, is a very interesting and timely theme for this story to explore.  It’s a dark premise, but it also gives Batman a chance to rise from arguably the lowest point he’s ever been in.  Batman has had everything stripped away, it’s just him, the Batsuit and the devil on his shoulder in the form of the Joker’s head.

I also enjoyed how Snyder briefly toyed with the idea of Batman being the fantasy of a madman.  I think the “crazy” aspect of the mission is always implied just beneath the surface of every depiction of Batman, but this is one of the few times I’ve seen a writer really acknowledge it with more than a wink.  While it turns out to be an illusion, it was convincing enough that it had me questioning it on the first read through.

I would like to applaud the creativity that went into imagining this dystopian future.  Speed force storms and the death of the Green Lantern Corps were all brilliantly done.  I found the sight of disheveled, depressed people being dragged around by their immature constructs of monstrous babies to be incredibly haunting.  The loss of hope and lack of will to keep fighting is palpable.  It’s probably purely coincidental, but I also got a lot of Shingeki no Kyojin vibes from this scene (which was very cool!).

Obviously one of the most interesting things to look forward to in the next issue is Batman trying to figure out who this mysterious Omega is.  Omega is clearly a character of incredible power who has possession of the anti-life equation, but the conflict may become a more personal one for Batman given the fact that it could be someone he knows personally.  Joker remains the wildcard here.  He can’t really remember why his head is in a lantern but I have a feeling he will play a crucial role in the story.  What that role may end up being I can’t say, but I do know that he continues to provide a comedic element while also serving as an unreliable narrator.

The art in this issue is fantastic.  Full disclosure, this art team on the New 52 Batman title is what got me into comics years ago so I feel kind of a special connection to the work they do.  Capullo has done so many successful books with Snyder over the years and the synergy they have really shows up in a positive way here.  Glapion is one of the best in my opinion and his talent is on full display in the first few pages of this book.  The pages of Batman and the Batmobile in the rain are all beautifully rendered.  I also like how the scene shifts from the dark nights of Gotham to the bright white of what is supposedly Arkham.  The panels here have a minimalist design with lots of white space and I think this works well to show Bruce’s confusion and limited perspective of the world around him.  The colors shift again to the warmer orange and red hues of a desert climate befitting a post-apocalyptic world.  The lettering is also well done although the font for the Joker’s dialogue can be a bit more difficult to read in some of the smaller speech bubbles.  I did notice what appears to be a small mistake in Bruce’s dialogue in the far-left panel where Diana takes him through the stable.  The name “Diana” is repeated twice.  Not a big deal at all, but perhaps something to correct for the trade if it is a mistake.  Overall, an excellent job.

Final Thoughts: An original idea for a story brought to you by a creative team that has a wealth of experience working with the character.  Definitely a book I recommend picking up.