Review: The Batman Who Laughs #6 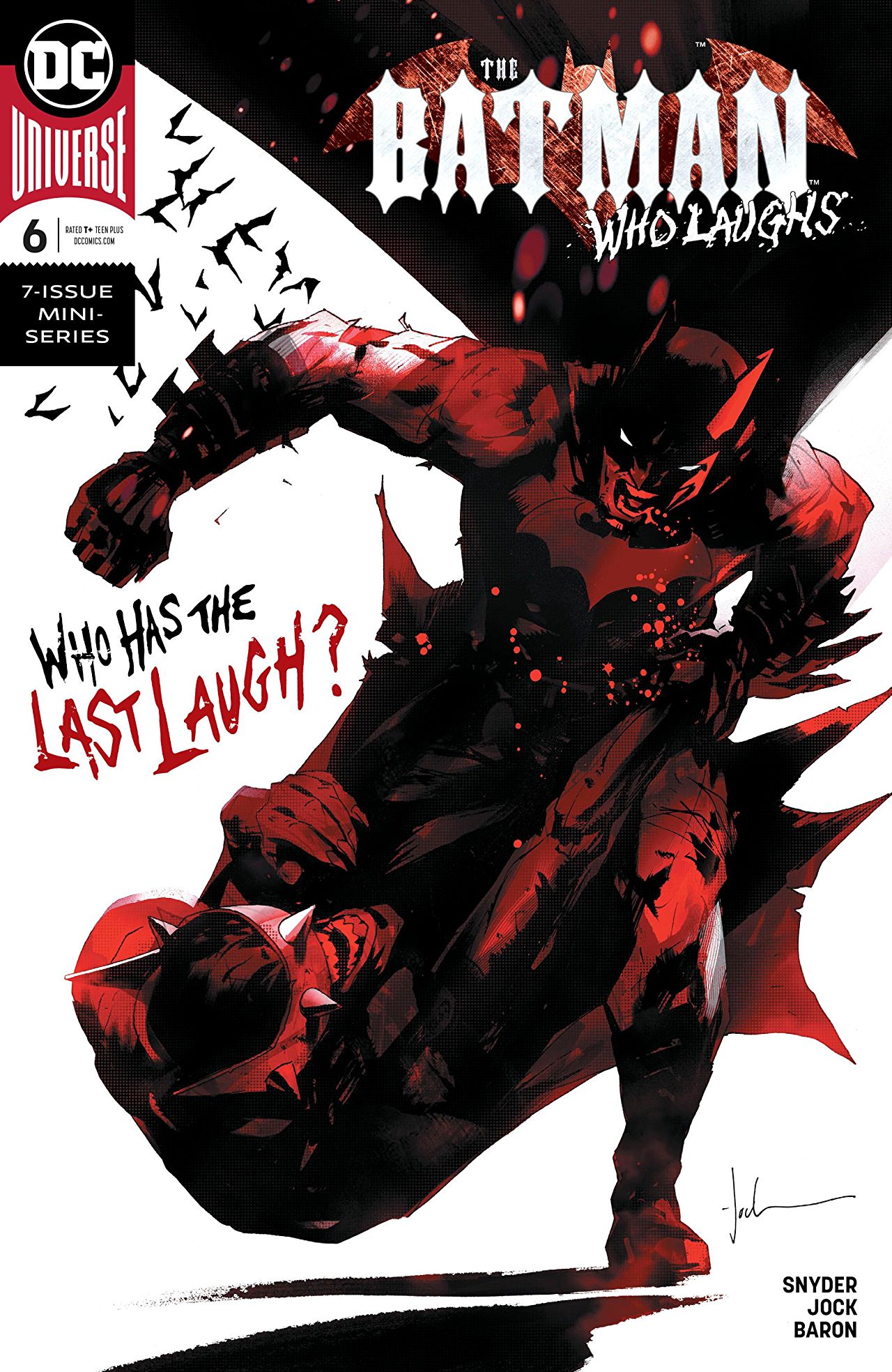 Synopsis (spoilers ahead): With the skies of Gotham covered with drones which were activated by the Last Laugh, Bruce begins to think happiness is just laughter. It is so simple. Some anthropologists think laughter developed as a courting call. Others believe it evolved as a reaction to incongruity. But most think laughter started as a group signal to let everyone know all is okay. For Bruce, laughter means he has done his job. When people laugh, it signals they feel safe, just like he did as a boy. The Last Laugh was supposed to make people feel safe. Two hours ago, it went live sealing off Gotham from the world. Right now, no one is laughing. No one feels safe. Before long, they will all laugh.

Commissioner Gordon and James Jr. are held in confinement in the Batcave as Batman uses the Batcomputer. Alfred tells him his blood toxicity levels are near the point of no return. He only has ten percent healthy blood cells left. The slightest rise in activity will cause them to decrease. He needs to slow down. Batman, as usual, tells Alfred it is okay. Gordon asks Batman why he set off the protocol, and Batman states it is their only chance. The Last Laugh takes over the power grid, and although the Grim Knight will hack through it, the Last Laugh will slow him down. James Jr. asks if this is a ploy to trap the Batman Who Laughs. Batman tells him he will face him, but he needs their help to stop the drones from releasing the serum. Gordon asks how will he even be able to beat him since he is transforming into him. Batman tells him he is almost like the Batman Who Laughs, and that gives him all the advantage he needs.

The Batman Who Laughs looks through the scope of his sniper rifle at a pocket of Dark Energy in Crime Alley. He is waiting for a portal to open to kill another Dark Multiverse Bruce Wayne. Batman tells him to watch closely because he is about to make his target disappear. The Batman Who Laughs thought they were on the same side. But, his transformation will be complete in about an hour or two.

Batman says he has transferred Gotham’s power away from every site that contains Dark Metal except the Batcave. The Batman Who Laughs asks if he can see the portal. With so much Dark Metal in the cave, he is able to look through a massive portal into the Dark Multiverse. He can see thousands of Bruce Waynes. He can see that all of these Bruce Waynes are happier and better than he is. Batman demands for the Batman Who Laughs to come to the Batcave in one hour.

Gordon and James Jr. try to unlock an access panel, and James Jr. asks if Gordon will reinstate his treatment program. He acknowledges all the pain and hurt he has caused and realizes he will never be able to make up for what he has done. Being on this medicine has caused him much pain, but he knows he is better to be on the medicine than not. He wants to embrace being good. Gordon turns around and tells his son he will not reinstate it. He had always believed James Jr. was fighting the evil in himself. Gordon thought his son was good. But, it was all a mask. One day he will believe his son, but not yet. He just cannot trust James. Gordon unlocks the armory and he and James Jr. stock up on weapons.

As Batman stands outside the manor preparing for his battle against the Batman Who Laughs, Alfred warns him not to do it. He only has five percent healthy cells left. If he fights, he will be lost for forever. Batman tells Alfred to trust him; this is all part of his plan.

He throws down his crown and thinks everything comes down to this moment. There is a moment right before a laugh when the body tenses. The diaphragm hardens and the larynx closes. That is how it feels right now. It feels as if the city is prepared for a massive laugh. He asks himself if Gotham will laugh with himself or the Batman Who Laughs.

The Batman Who Laughs walks toward Batman asking if it is like looking into a mirror. His transformation is near complete. The Batman Who Laughs tells him his transformation was made complete when he was preparing a glass of water while the Bat-Family was in the Batcave. The exertion of reaching for this pitcher caused him to snap and kill all of them. He admits he does not see Batman’s plan. Yes, he will fight him, but Batman will lose. When he does beat him, he will take whatever Bruce that Batman pulls through the portal.

The Grim Knight radios the Batman Who Laughs he is almost to the Last Laugh water supply. As he is about to drop the serum into the water, he is caught in a net. Gordon and James Jr. fly down in Batsuits prepared for war. The Grim Knight admits their plan is genius; however, he has studied all of Batman’s armory, and he immobilizes their two suits. He challenges Gordon to a fight one last time. As Gordon prepares for the fight, the Knight tells him what he did on his world. Gordon locked his son away and forgot about him. People tried to help, but Gordon never believed in him. Eventually, James Jr. hung himself in his cell. The Knight tells Gordon he always said James Jr. wears a mask, and underneath the mask is a monster. The Knight tells James Jr. his father does not believe in him nor love him. The Knight chokes Gordon, and Gordon calls out to his son for help. He tells James Jr. he loves him and believes in him. He tells him he was wrong. However, James Jr. says he was not wrong and abandons his father at the hands of the Knight.

Alfred tells Batman this other Bruce is about to come through the portal and his cells are nearly transformed. The Batman Who Laughs tells him that every single version of Bruce he pulled through the portal was selfish. Batman does not even know of a single Bruce who was truly happy. Batman tells him he does, and a young Bruce Wayne steps through the portal. He tells this younger version to run and he will keep him safe. The Batman Who Laughs tells him he will not fall into Batman’s trap. This is not his trap, it is Batman’s. He throws a Batarang at Batman’s eye and beats him down. Alfred radios Batman and says he has no more healthy cells left. The Batman Who Laughs tells Batman the happiest Bruce Wayne in all of existence is the one he will use for the last bit of the serum. It is the version who finally lets go of all his sadness and mistaken ideals. The happiest Bruce Wayne is the one who becomes the Batman Who Laughs. With that, he stabs Batman in his heart to gain the last bit of blood for his serum.

Analysis: You cannot complain that nothing happens in this issue. Wow. Snyder and Jock created an action-packed issue with high stakes. Batman now has changed into The Batman Who Laughs. The Grim Knight is about to kill Gordon. James Jr. walks away from his father after all the progress he made. And, Gotham is about to burn to the ground.

I have no idea how Batman is supposed to win. At each turn, he has been beaten by the Grim Knight and the Batman Who Laughs. The apocalypse is about to start in Gotham, and Batman has no plan.

I firmly believe Jim Gordon was in the wrong. His son was trying to be a better person. He was on his medicine which calmed or eliminated his violent urges. He had a real shot at normalcy, but his father essentially abandoned him. So, I get why James Jr. would walk away. “If he will not believe in me, why try to be better?”

I find it interesting how the Batman Who Laughs says the happiest Bruce Wayne is not he as a child, but one where he views everything as a joke. Snyder talks about how laughing implies safety. He states Batman is the happiest when Gotham is safe, but this feeling is then fleeting. Gotham will always be in danger. Where there are people, there will be evil. He is seeking something he will never catch. However, if he views everything as a joke, then he has no more worries. In his eyes, the cares of Gothamites are nothing. He can be “at peace.”

Jock’s art is again top notch. There is so much action in this issue, and I am impressed with every panel. Nothing feels rushed or raw. He is the perfect compliment to Snyder.

Final Thoughts: Everything leads to the finale, and I cannot wait for what Snyder has in store!