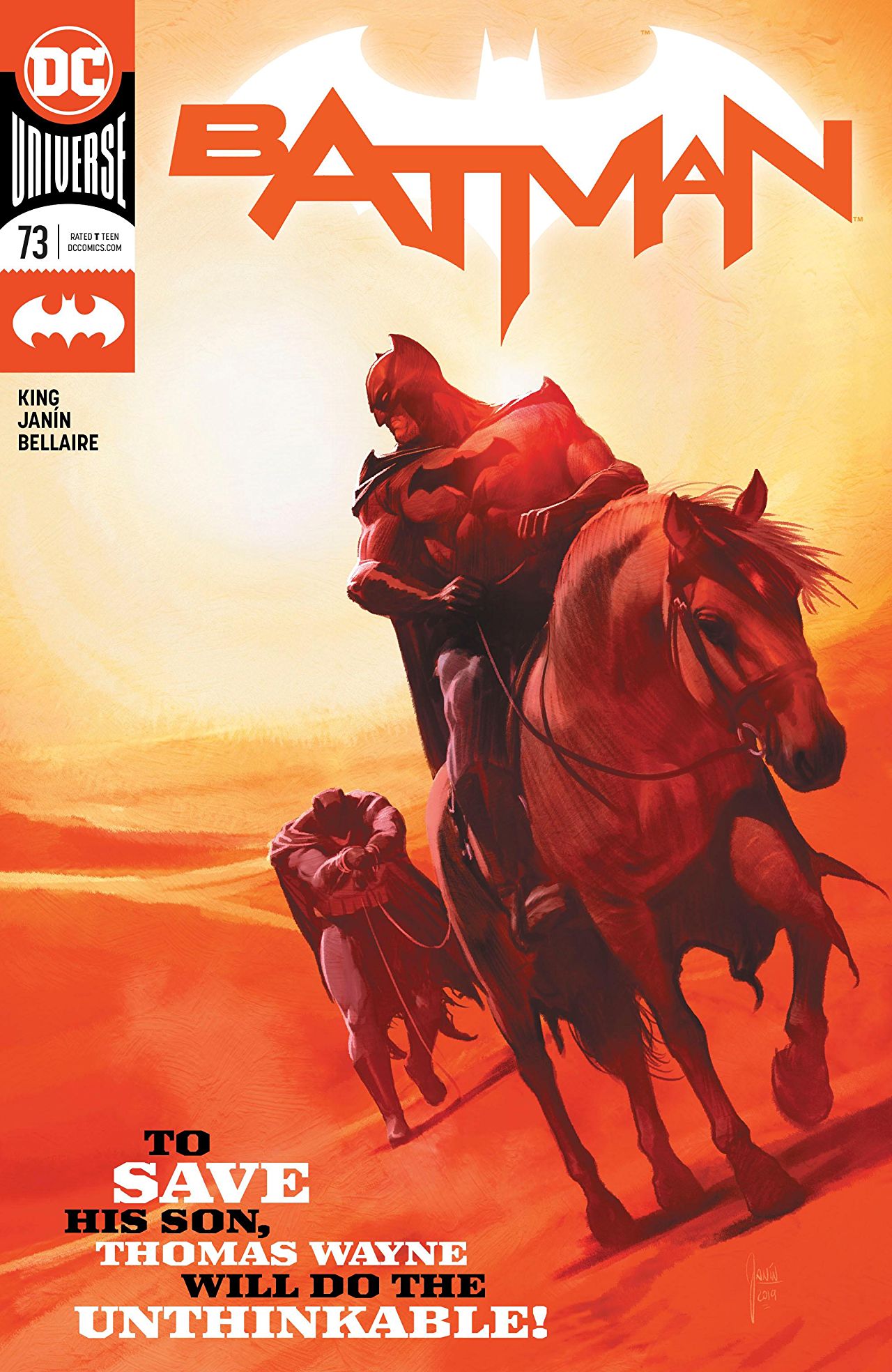 Overview: Thomas Wayne takes his captive son through the desert as he reveals his motives for helping Bane.

Synopsis (spoilers ahead): The story opens with Thomas Wayne Batman tying an unconscious Bruce Wayne to a horse as he sings “Home on the Range”. Thomas then sets off across the desert, with Wayne tied to his saddle as he drags a coffin across the sand. Thomas then sits at a campfire with an unconscious Bruce, and in the morning, Thomas wakes to find one of Ra’s al Ghul’s elite guard, “the Death in the Desert”, standing over him. The group attacks and Thomas fights them off, still singing “Home on the Range”.

After a day of riding through the desert, Bruce awakes at the campfire, disoriented. Thomas blocks Bruce’s attempts to hit him while reminding him about old lessons he taught him about fear when he was a boy and Thomas and his son hug. As Thomas readies their horse, he explains to Bruce that he is still under the influence of drugs. This is due to back surgery after the injuries inflicted by Bane during the previous issue and explains his confusion will pass.

The next night, at the fire, Bruce asks his father why he was helping Bane. Thomas asks Bruce if he wants to hit him, and when Bruce responds, Thomas only says “good”. When Bruce wakes in the morning, Thomas is standing over another group of fallen members of Ra’s al Ghul’s Death squad.

As they travel through the desert, Bruce begins to realize that Ra’s al Ghul has sent the guards to stop them from using the “Nain Pit”, a pit that can revive the dead, and that the body in the coffin they are dragging is Bruce’s mother. Bruce then puts on his cowl from one of the saddlebags. He then asks what his vow was worth and where it has led him. As the issue ends, Thomas responds that he is proud of his son and that its time to end his son’s pain.

Analysis: In an alternate version of this story, the information from this issue would fit in a single two-page spread of Thomas Wayne and Bruce crossing the desert.   While the issue is light on plot, I like the pace of this issue, and how King takes his time with what is the book’s first real-time with Thomas Wayne since his involvement in Bane’s plot was revealed.

The issue opens with Batman, in his own “Knightmare Batman” getup, singing what is famously a “cowboy” song as he rides through the desert. The issue, in general, definitely leans in to the Western theme and I think it’s a nice character moment to have someone who would have been a child in the late 50s – early 50’s when westerns were at their height to be enjoying the “old west” of it all, not to mention being a song that is thematically on-point for a character that is trying to “go home”.

As for Thomas’ motivations, there is an element of “well… of course” to his plan. There’s nothing terribly shocking or out of left field with this issue, which is fine, but I do wish that we had gotten a little more information as to what exactly Thomas’ role is in Bane’s plot, or even how it is that Thomas is still alive after his reality caved in on itself.

Bruce in this issue looks to have hit rock bottom. I like that you essentially see him give up over the course of the issue, losing faith in his life’s work. I like the symbolism of having Bruce put his cowl on to join his father on his mission. It’s been pretty heavily promoted that we are heading into a reunion between Batman and Catwoman, so I would imagine that Batman’s crisis of faith is heading for a turnaround in the next couple of issues. What I’m most looking forward to is the impending collision course between Bruce and his father when Thomas’ plans don’t work out the way he hopes they will.

I think it’s important to remember in looking at Thomas Wayne that this is the “Flashpoint” version the character, a formerly good man that has been driven to do terrible things out of grief and loss. Now he has made a deal with a devil, Bane, to try to get back what he has lost and the potential for the terrible things he is willing to do makes sense. I think that if this story is building to taking away the possibility of Thomas Wayne getting his family back then we have the makings of what could be a very interesting addition to Batman’s rogue’s gallery.

There is a cinematic feel to the issue that I think comes through in the art, and I like the visual storytelling in moments like having Thomas sitting by a fire in silence, eating with nothing but the onomatopoeia of the fire crackling or the next page of a member of the squad standing over him with the sun in the background. King and artist Mikel Janin have been working together for years now and you can feel the level of trust that King has in the artist in telling the story.

Final Thoughts: This was an issue that took a simple premise and executed it well.   It’s no secret at this point that Catwoman is returning to the book when Batman is at his lowest. We are heading to a point where Batman will get back on his feet and in the fight. While I’m looking forward to Batman and Bane throwing down, what I really can’t wait is to see is what happens when Bruce has to face off against a bitter and rage filled version of his own father.