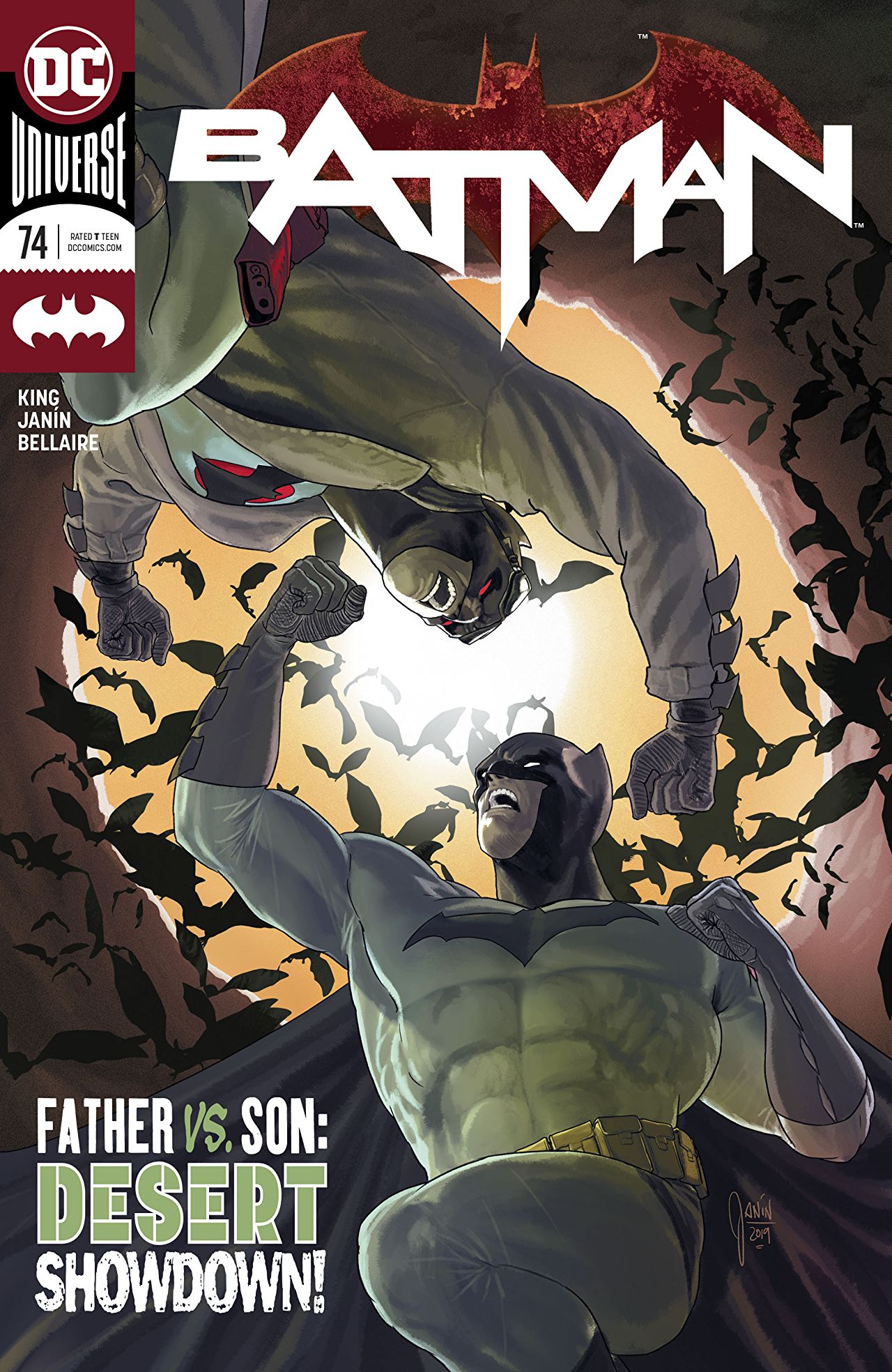 Overview: In the finale to “The Fall and the Fallen”, Batman faces off against his own father.

Synopsis (spoilers ahead): The story opens in the desert with Batman and his father, Thomas Wayne’s Flashpoint Batman, fighting off an army of Ra’s al Ghul’s soldiers as they fight their way to a pit that can revive Bruce’s long-dead mother, who’s casket they have been dragging across the desert. As they fight, Thomas asks Bruce about the story he used to read to him as a child (which was featured back in Batman #57) called “the Animals and the Pit”.  As they ride, Thomas remarks that Bruce was a shy and timid child and they talk about how Bruce would cry for that story to be read and how Thomas didn’t know why he liked the story so much. Bruce and Thomas reach the pit and repel down into it with the casket along with one of Ra’s captured soldiers, as Thomas explains that the pit allows someone to trade their life to revive another.

As they lower the casket, Thomas speaks more about the story he would read, and how it brought comfort to his mother that Bruce could repeatedly hear such a horrible story and still dream of a better world. Thomas then explains that Bruce has been addicted to being Batman and that he needed to be brought to a low point and broken in order to grow past it and get his life back. Bruce then explains that the reason he kept insisting for the same story is that he couldn’t give up hope that each time it was read that there would be a happy ending.

Batman then proceeds to strike his father and the two fight as “The Animals and the Pit” is recited in the captions around them. As they fight, Batman throws Thomas through the casket causing it to break and spill its contents, a bunch of rocks, on the cave floor. Batman explains that he hid his mother’s body as his father slept earlier. He didn’t know if he could beat his father so he planned to get him to the pit so he could at least hurt him enough so they would never escape. As the two fight, Batman explains that he learned a long time ago that his parents are dead but that he was still alive. The story then ends with the next morning as a gloved had climbs out of the pit.

Analysis: As expected, Bruce’s reunion with his father has ended with the two of them trading punches, which by the cover alone was never meant to be much of a surprise. What I think is interesting about this particular issue is that it’s the first issue since the events of issue #50 that Batman acts with some real agency and doesn’t seem like a pawn that Bane is moving around a chessboard. Seeing Bruce be one step ahead of his father in this issue was a welcome change of pace and I enjoyed the reveal that Batman has been biding his time and waiting for the perfect time to strike against his father.

As stated in my review of the previous issue, I think that the Flashpoint version of Batman has the makings of being one of the great Batman villains. An alternate Thomas Wayne that has been twisted by anger and grief into doing horrible things is interesting. I like the idea of Batman having to face off against this nightmare version of his father.

The story is focused on Bruce and Thomas reminiscing about the story that Thomas would read to his son as a child. Thomas misreads Bruce’s fascination with the story as something naïve to be stopped out and I think that the attitudes of the two men towards the story pretty much sums each of them up as individuals.  Thomas, angry and vengeful, can only focus on the carnage of the animals devouring each other and wants to protect his son from having to face this reality.   Bruce, on the other hand, believes that however impossible, he can somehow will the story to change in the end.   I think that this, in a nutshell, is Batman. A man who goes out every night, knowing that his mission to keep anyone else from dying is impossible but trying anyway, as opposed to his father, who’s Batman is just lashing out at the world.

Tom King’s call back to the story that he planted in issue #57 is a welcome one, as it provides nice continuity to an early low point in the story, and also provides a lot of clarity as to why the story was included in the first place in the earlier issue. It highlights how this story I think will read far better as a collected story (or several collected stories given its length).   It will be interesting to see if the story gets a third telling as Tom King’s run walks towards its conclusion, perhaps with a different ending.

As for whose gloved hand is climbing out of the pit, it’s anyone’s guess and I don’t think it really matters. At some point, Batman will obviously get out of there. Solicitations for “City of Bane” have already highlighted covers featuring Flashpoint Batman along with Gotham Girl, so we haven’t seen the last of him either, which is good news because this wouldn’t be a satisfying end to Thomas’ part in this story.

Mikel Janin does his usual stellar job with the art. The shirtless Batman with his cowl still in place fighting in the desert is classic imagery that Batman artists going back to Neal Adams in the 70s and it’s a nice nod to those old stories to have that look be featured here.

Final Thoughts: A solid issue featuring a return to form for Batman that makes me excited for the next chapter as this saga enters its final chapter with “City of Bane”.