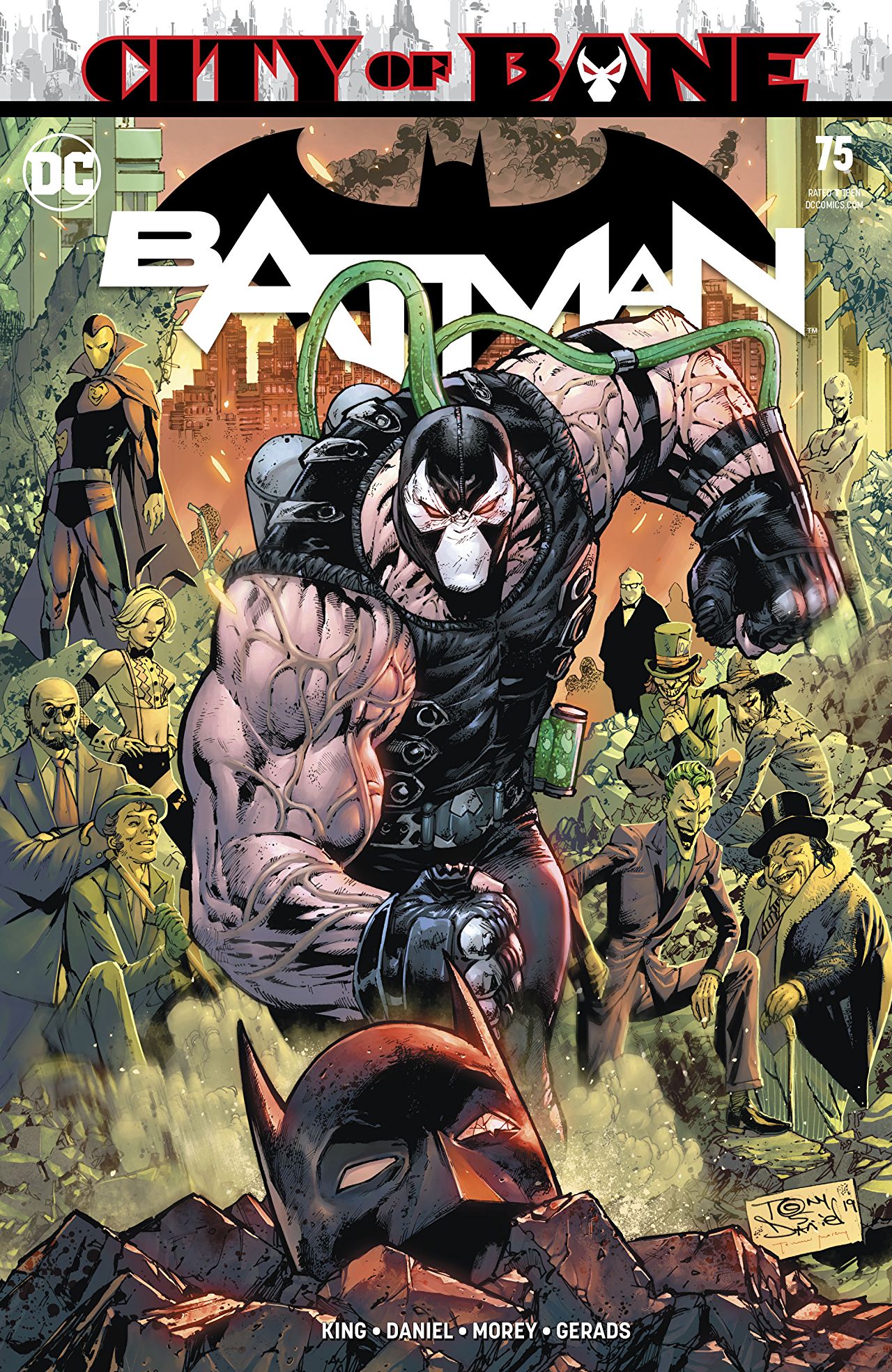 Overview: Bane has taken control of Gotham in the first chapter of “City of Bane”.

Synopsis (spoilers ahead): The rain falls on the caption “Later” as a police car speeds through Gotham City with two detectives on their way to a crime scene.   The funny thing about this scene is that the two detectives are the Joker and the Riddler. At the crime scene, two costumed villains have been murdered by Two-Face. Joker and Riddler update the Commissioner of Police, Hugo Strange, who wastes no time in activating the Bat-signal to summon Thomas Wayne’s Batman.

The story then cuts to a page of a lone figure in a parka hiking up a snowy mountain as the captions begin to tell a parable about a man and a horse.

In the Batcave, Thomas Wayne tries to deduce how Two-Face could have taken down a pair of metahumans as his butler, the Ventriloquist, looks on before racing off to one of Two-Face’s safehouses. As Thomas leaves in the Batmobile, the screens on the Batcave computer distort to a hypnotic pattern as a voiceover mocks the Ventriloquist as being weak.

The figure in the parka continues up an icy mountain staircase as the parable continues.

The story then cuts to Two-Face’s safehouse, where Harvey meets with his two heavy hitters, Solomon Grundy and Amygdala when they are interrupted by Thomas Wayne’s Batman crashing through a wall in the Batmobile. Thomas faces off against them both as Thomas counts down to his sidekick, Gotham Girl, entering the fight.

The figure makes his way to the top of the mountain to find a decaying old building.

Gotham Girl faces off against Amygdala, throwing him around before using her laser vision to sever Amygdala’s forearm and taking him out of the fight. Harvey puts a gun to his temple and threatens to blow his own brains out, which is foiled as Thomas throws a batarang through his eye.

Thomas brings the injured Two-Face to Strange, who talks about how someone is going to be “upset” that Two-Face is injured.

As the “monk” and his accomplice leave talking about how the villain Magpie hired them, the figure is revealed to be Bruce Wayne, who is injured and lying naked in the snow.

At Arkham Asylum, Two-Face is strapped to a chair facing a door. Meanwhile, Thomas Wayne returns to the Batcave and climbs the stairs to meet his dining companion.

As another figure stands over Bruce’s body in the snow, Two-Face is joined by Psycho Pirate who says that he is going to “cure him”.

Meanwhile, Thomas Wayne’s dinner companion is revealed to be Alfred. Thomas makes reference to Gotham Girl standing guard against the other members of the Bat-Family, stating that the threat of what Thomas could do to Alfred should be enough to keep the Bat-Family away.

Psycho-Pirate puts his mask on and tells Two-Face about the love he will feel for Bane and his city as Alfred warns Thomas about what Bruce is going to do to him when he returns.

As Bruce weakly mumbles about how everything started on a boat, the figure standing over him is revealed to be Catwoman.

The next page features the Joker and The Riddler at the Gotham Police Major Crime unit using a captive Harvey Bullock as a dartboard as a drone watches from the window. The drown flies off as a conversation between Bane and Lex Luthor plays out, with Bane refusing an offer to join Lex Luthor’s endeavors.   The drone flies through a Gotham City featuring billboards stating that Gotham Girl is watching as an old man pocketing an apple from a fruit stand is met by Professor Pyg in a police uniform as similar scenes play out with other villains terrorizing the city as the issue ends with the drone projecting a hologram of a cloaked figure as Bane looks on.

Analysis: I like the surreal and serious tone that the story starts with, with Joker and Riddler acting like a pair of somber police officers and how the beginning of the story plays like a police procedural before King pulls back the curtain to reveal what is really going on, with the horror of the various Bat-villains acting as the law in Bane’s Gotham City.  What I am enjoying most about this issue is that you can see writer Tom King incorporating elements that he has been playing with throughout his run.   It’s finally clear why Psycho-Pirate, for instance, one of the lamest villains in the DC Universe, has been popping up throughout King’s run, and his inclusion here in Bane’s endgame is interesting and feels earned.

It was also refreshing how King subverts expectations in the scenes of Bruce climbing a snowy mountain looking for wisdom, which is a trope that we have seen over and over again, only to be mugged by a couple of thugs who again prove that Bane continues to be one step ahead. I like how Bruce is kind of back to square one, reverting to looking for answers in faraway places with wise men, only to have the Catwoman come to his rescue.   I like the idea of Catwoman coming to Bruce’s aid at a time when he is looking for answers. Tom King has done a great job during his run in making Selena a perfect foil for Bruce. I’ve missed the scenes of Selena calling Bruce on his BS I also like how the disagreement over how the two of them met continues. I like how they each remember it differently, which is both a fun nod to the different origins of Catwoman as well as the sort of argument a couple who have been together a while is bound to have.

Thomas Wayne continues to highlight how he is a very different Batman, with the most obvious example being the near-fatal way that he deals with Two-Face.   What I think is more interesting is partnering him with Gotham Girl. I think it’s important to remember that Gotham Girl’s powers take time off her life the more that she uses them, and while Bruce wanted her to retire as to not lead her to an early death, Thomas doesn’t seem to have this problem and gladly accepts her as his sidekick.

I think it is also important to highlight the meeting of Bruce’s two “fathers” as Thomas and Alfred face off.   Thomas says more than once that Bruce is a child, and I think that it comes down to the more harder edge Thomas underestimating his son. I think this is an example of Alfred having a far better idea of who Bruce is and what he is capable of, which feels very appropriate for Alfred.

I do wish that the Bat-Family had a greater presence in the issue, but I did appreciate that King thought to at least address that Bane and Thomas Wayne had a way to keep Batman’s allies at bay by keeping Alfred hostage. I also thought that Lex Luthor’s inclusion was an unnecessary tie into the Year of The Villain event, but I did like how Tom King used the opportunity to answer a few questions about the world he sets up in this issue.

I also can’t help but wonder if Bruce’s alter-ego has been revealed to all the different villains that are serving under Bane.   The Ventriloquist serving Thomas in the Batcave is at least a cause for concern and I think that it is something that is going to need to be addressed at some point in this series.

Artists Tony Daniel and Mitch Gerads do great work here, and I like the decision to split the work up with Daniel taking the lion’s share of the work and Gerards providing the art for a section that functions as almost an epilogue to the issue.   As much as I prefer when a single artist handles an issue, the change in artists felt natural in this issue and I didn’t feel jarred by the change in styles.

Final Thoughts: A solid issue that quickly sets up the world and stakes that Bruce is going to have to overcome. I’m looking forward to seeing where the story goes from here. Go buy it.