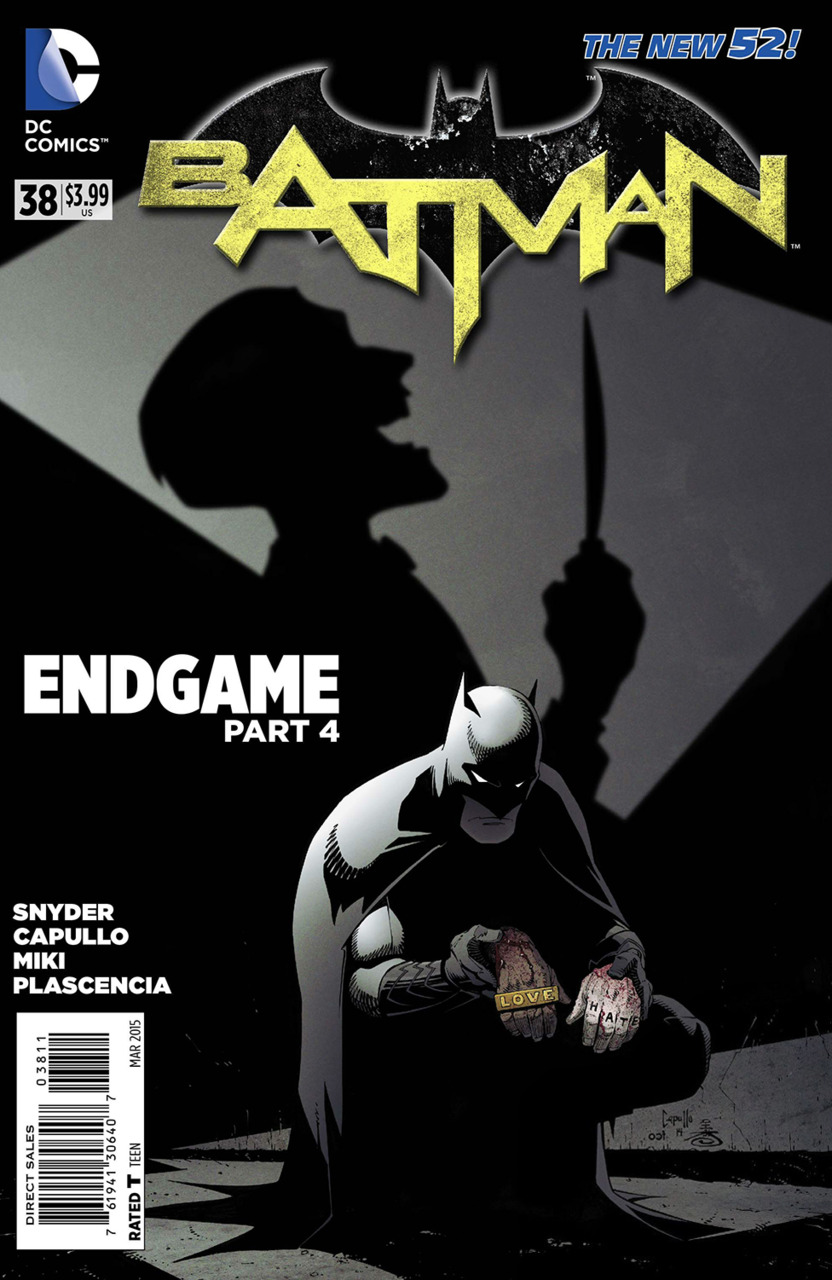 “Endgame” continues this month, as we open this issue with Batman gliding across the streets of Gotham carrying a distraught Duke Thomas. Batman’s monologue explains how James Gordon chose this particular section of Gotham, known as Foundry Square, as it was the first location that Dutch explorers settled in and it is rich with history. Entering Gordon’s apartment, Batman incapacitates several of the Jokerized citizens outside and climbs the staircase seeking his friend. Batman finds Jim slumped against a wall with an axe embedded in his chest. Batman sends Duke to find a first aid kit, but Gordon suddenly rises and wields the axe against the Dark Knight. However he is quickly knocked out by tranquilizer darts shot by Julia Pennyworth. She explains that upon further examination of the Joker toxin, it seems it causes some sort of cellular rot and will be fatal. Duke comes back with the first aid kit, and Batman sends him off with Julia to the safety of the Bat Bunker.

As Julia and Duke sneak out of the building, Batman distracts the Jokerized citizens outside as he contacts Agent 37 (Dick Grayson) for some help. As Batman fights off the mob, Dick and he discuss the nature of the virus in comparison to a blood sample from the Joker. It seems that the regenerative substance in his blood is an inverse to the virus itself…meaning that they are exact opposites of one another, “life and death. Comedy and tragedy. Love and hate.” Batman gets distracted momentarily when a Jokerized victim wielding a tank fires on him. Batman quickly incapacitates the officer inside, and uses the tank to cause enough destruction to allow him to escape. As Batman grapples up to the rooftops, Batman comments that he knows of three scientists who are capable of making the regenerative formula that Joker is taking – Karl Hellfern, Hugo Strange and Paul Dekker. We learn that Strange hasn’t been seen in a long time, while Batman recounts Hellfern’s death during the Zero Year. This leaves only Paul Dekker. Batman also reveals to Dick that Joker knows his true identity.

We cut across the city where Batman has entered the home of Dekker, and recounts how he created the “healing stitch,” an embryonic cell that could cause other cells to revert to a previous state and essentially heal themselves. Batman is surprised by an enraged Dekker wielding a machine gun, and the two verbally spar as Dekker explains how he created the formula being used by the Joker. Dekker explains that he attempted to recreate a substance that has been hinted at throughout history – the meteor that immortalized Vandal Savage, the Lazarus Pits used by Ra’s Al Ghul and a pale man that encountered the substance long before Gotham was founded. Dekker seems to think that Joker is this pale man who has walked the Earth, immortally laughing at everyone and he used his blood to synthesize the virus. Batman tackles Dekker out of a window and only the colorful quilt that Dekker is wrapped in saves him from the fall. As Batman holds Dekker, he receives a call from Julia who reveals that in a matter of hours the city will to those infected. She also reveals that she has been running facial recognition against images from Gotham’s history…and Joker has been popping up everywhere. Suddenly Dekker injects himself with a syringe and plummets towards the ground.

Back in the apartment, Batman protests that it must be a trick…Joker cannot have been present throughout history. Julia responds that the photos are most likely fake, but that these are the best doctored photos she has ever seen…good enough to be real. The issue closes by Batman stating that he needs to seek out someone well influenced with Gotham’s history…and our final panel reveals Batman emerging within a lair of the Court of Owls.

As always, Scott Snyder and Greg Capullo deliver and visually and verbally stimulating issue. I’m pretty sure that I had to put this issue down several times as I was astounded by the events that were unfolding.

First off…an immortal Joker?! Can this even be real? I mean, sure…this is the New 52 and anything can happen. Joker’s origin has never definitively been stated…there are some references to him being the Red Hood leader from Zero Year, but is this man and our Clown Prince one and the same? Is it possible that we are dealing with an immortal Joker that has been terrorizing Gotham for centuries? Obviously this cannot be true…but all the same, this story is so utterly convincing that I almost believe it. So much so that I doubt what I believe to be true…and this is probably my main point in why I love Snyder’s writing so much. The fact that he can take a fan that is well versed in Batman’s history and make him question the facts that he knows is true, is truly remarkable. My big question is…is this Joker really the Joker? And I’m not the only one has brought up this point…Snyder’s Joker is drastically different from any other iteration seen in recent years…so different that I am considering the fact that it isn’t him. And yet, I’m okay if it is him. Confused? Well so am I.

I liked that we got a few call backs in this issue; Batman brings up several past Batman villains including Hugo Strange and Doctor Death…and we even get to see the first appearance of Crazy Quilt in the New 52. Granted, this isn’t how he has ever been portrayed…but it was interesting to see how Paul Dekker has become a pawn within the Joker’s game, and he even carries a patched, colorful quilt to pay homage to his original villainous origin. It is unknown if Dekker ever became Crazy Quilt in this universe, but Dick Grayson seems to know him and almost blurts out his alias when talking to Batman.

Overall this was a very thought provoking issue and is probably up there with several of Synder’s best issues. I am thrilled to see how Batman will confront the Court of Owls and see if they can shed some light on this immortal pale clown that Dekker was referring to. I am anxiously anticipating next month to see how “Endgame” unfolds.