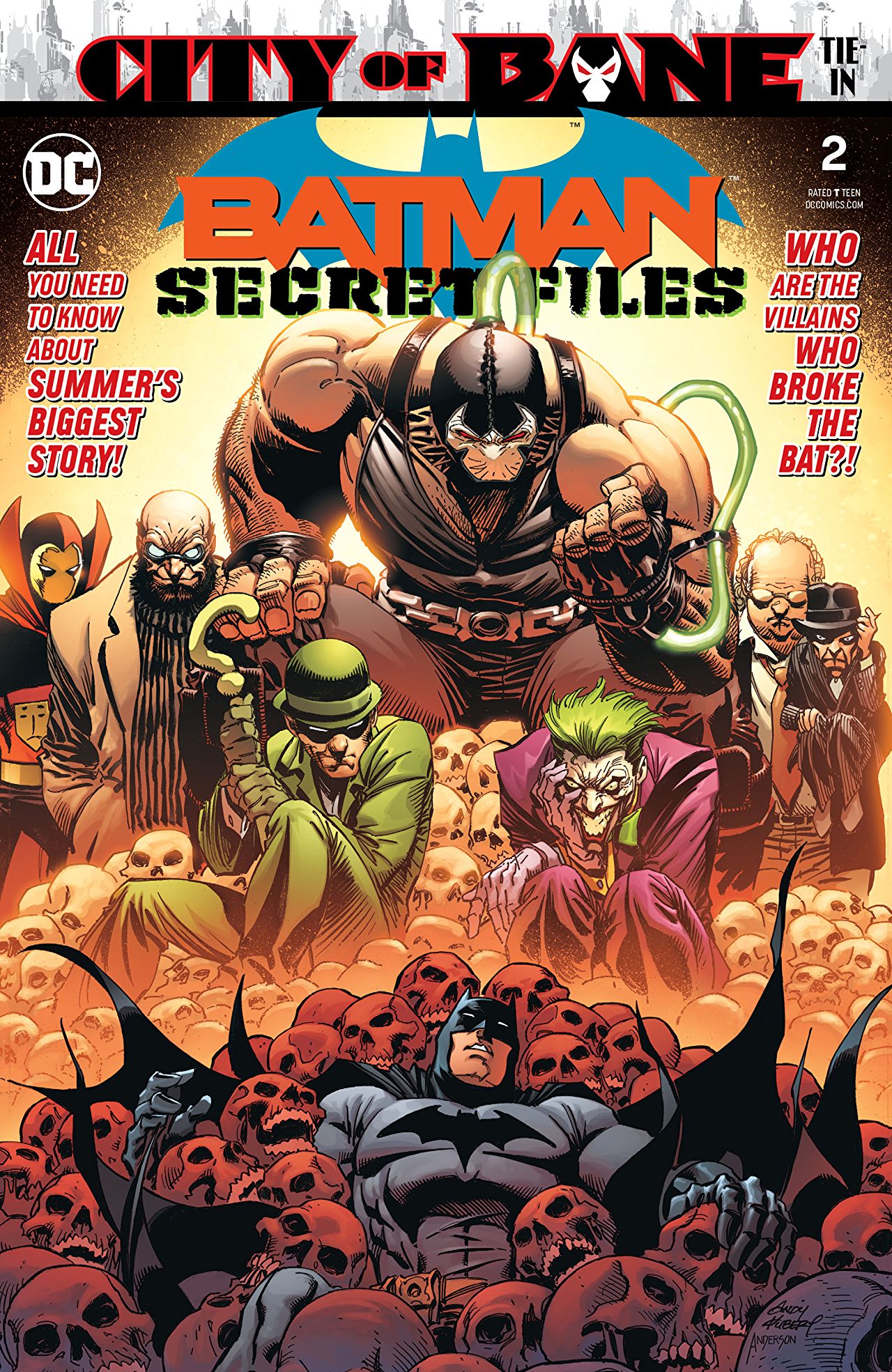 Overview: In this tie-in to the City of Bane event, this book showcases Batman’s villains in five short stories.

Story #1: Joker in “If the Suit Fits” by writer Andy Kubert and artist Amancay Nahuelpan

Synopsis: The story opens with Batman chained upside down in a warehouse as the Joker stands over him. The Joker explains that he is going to take away his costume and toys and then after planning to parade around as Batman, the Joker plans murder to Batman with his own gadgets. There’s just one catch. Joker can’t seem to get passed the Batsuit’s defenses, including shocks, sonics, and minor explosions, causing the Joker to become more and more upset as Batman just hangs there, amused by the whole thing. Eventually, the Joker activates Batman’s cape, which expands outward and then wraps around Batman as an armored cocoon, after which Batman frees himself and lays the Joker out with a single punch.

Analysis: There’s a lot of room of debate in the various interpretations of the Joker. Is he insane or just plain evil? Is he a failed comedian who had one too many bad days or a scarred mobster who just wants to watch the world burn? The one area that I think we can all agree on is that the Joker isn’t stupid, which is how he is presented here. I have a hard time seeing the Joker, arguably Batman’s most cunning villain, reduced to acting like the burglars from Home Alone. It’s a fun story, but it isn’t the Joker. In the plus column, Nahuelpan’s art was something that I quite enjoyed, especially the panel of Batman knocking out the Joker’s teeth and I’d like to see more Batman out of this artist.

Story #2: Psycho-Pirate in “He Helped Us” by writers Collin Kelly and Jackson Lanzing and artist Carlos D’Anda

Synopsis: A middle-aged man joins a cult-like gather of robe-wearing followers in Upstate Gotham, where the robed disciples all speak about how an unnamed figure has helped them with various emotional problems and how their pain has been taken from them. The group gathers around their leader, Psycho-Pirate. The man challenges Psycho-Pirate, calling him a charlatan before giving an order for a missile to drop through the roof, covering the room in smoke, as the man sheds his disguise and is revealed to be Batman, who quickly defeats Pirate’s minions with a sonic grenade. As Batman approaches, Pirate uses his powers to attempt to take away Batman’s painful memories of his parent’s death, he has a vision of his parent’s telling him to make them proud and after Batman quietly says that he will, he takes out Psycho-Pirate and leads one of his young followers out into the daylight.

Analysis: Given the key role that Psycho-Pirate plays in the main Batman title, it is not surprising to see him pop up here.   I’ve never been a huge fan of the character, who I think has one of the worst names in all of comics (I’m still waiting for someone to explain to me how exactly this character is a pirate. Bootleg DVDs maybe?). I don’t actually mind the cult leader angle as it seems an appropriate use of his powers. I also can’t help but notice that this story seems lifted straight out of Star Trek V: The Final Frontier with a powerful cult leader controlling people by removing their painful memories and a hero who finds strength in his pain and trauma. The art is well executed and I enjoyed that Psycho Pirate’s costume was reworked for this story.

Synopsis: The story opens with an unknown voice questioning why the Riddler needs to torment Batman. Riddler responds by narrating the events of his latest plot. A groundskeeper at a stadium is blown up while mowing the grass as the Riddler broadcasts his latest brain teaser, which Batman catches in the Batcave. Batman rescues a couple from a death trap and then follows a clue to a theater, an apartment, and then a hospital where he narrowly avoids an explosion. Batman then follows a trail to a basement where he finds a bomb and focuses in on a surveillance camera in the room, and finds the Riddler in a surveillance room. The story ends in a doctor’s office at Arkham, where the narration is revealed to be Edward Nygma talking to his doctor, as the Riddler cryptically tells his doctor that he answered the question he posed at the start of the story, only that the doctor is too stupid to see it.

Analysis: This is the take on the Riddler that I would like to see more, a sociopathic killer who is only concerned with proving how much smarter he is than anyone else. This story is a little unique in that it never spells out exactly how Batman solves the Riddler’s challenge. There is even an editor’s note challenging the reader to figure it out.   While I applauded the work that went into this, I did find that it made the story a little more confusing than I think it needed to be and I think that the story would have benefitted from Scott playing things a little straighter.

Synopsis: A cobwebbed security camera looks on five men in numbered Batman costumes are shown strapped into a machine that will kill them each in unique ways if they can’t escape the death trap, as the captions around the scene reveal this to be an experiment where one of the masked men might be revealed to be Batman. One by one the “Batmen” are killed. The first burned to death, the next impaled by Batarangs, the third decapitated. A fourth Batman manages to free himself by dislocating his shoulder, only to be killed by the last remaining Batman, who is revealed to be Hugo Strange, for not behaving as he believes Batman should, as Strange prepares for another round of experiments.

Analysis: This was an interesting take on Strange’s obsession with Batman and I like the demented logic of it. Take five people who meet a certain profile. Put them in a death trap. And eventually one of those people will be Batman. I also liked how Strange can’t get out of his own way at the end and the “Batman” who beats his trap is just as dead as he doesn’t conform to Strange’s bizarre hero-worship version of what Batman should be. It’s a unique take on the character. Kind of Hugo Strange by way of “Saw” and I enjoyed it. Eduardo Risso’s art was also a gritty treat and I particularly enjoyed how the “Batman” in this story were funhouse mirror versions of all the Batmen that we have had on screen.

Synopsis: Years ago at the Pena Duro Prison on the island nation of Santa Prisca, reporter Daniel Chirinos sits down with a teenage but already hulking Bane for a story on the terrible conditions in the prison. In the present, Bane takes on a group of assassins from a violent street gang, demanding that they tell him Daniel Chirinos’ whereabouts. The story then moves to Batman, who is in Honduras as he tries to stay on Bane’s trail as he looks for the reporter. As Batman fights a group of corrupt police, he explains to Alfred how although there are records of Chirinos’ articles on Pena Duro, there was no record of any mention of Bane in this article. The story then cuts to Bane charging through gunfire as he fights his way through cartel members until he locates Chirinos.   Bane makes it clear that he is not there to rescue Chirinos, who tries to reassure Bane that the tape of their interview was destroyed. Bane explains that Chirinos still knows what was said and the story ends with Batman finding Chirinos’ lifeless body as the captions play the end of the interview, where a young Bane admits that his only fear is what horrible things he might do if he was ever free from the prison.

Analysis: There is an interesting idea at the center of this story that makes me wish that it was presented differently. I like the idea of a young Bane who was terrified at what he was becoming and what he might do if he was ever free. I think that a story about Bane afraid of his own horrible potential is an interesting idea for a story.   The story is more interested in showing Bane on a mission to stamp out any perception of weakness and while that is perfectly in line with the character, its something I’m less interested in. What does continue to hold my interest is Patrick Gleason’s work here, which makes me miss his regular trips to Gotham during his Batman and Robin days.

Final Thoughts: In my review of the first issue of Batman: Secret Files last year, I mentioned how I think that the title “Secret Files” is misused and how it would be better served to save the title for something that was more of a primer for new readers into the world of Batman, which is how the title was used in the ’90s. I still feel that way. As much as I love Tom King’s run, for instance, it’s not particularly new reader-friendly and I think there is a place for a one-shot that acts as an entry point into the story.

That being said, this was fairly enjoyable if a somewhat uneven collection of stories. While some stories had issues, it still features consistently strong art and a few stand out moments.