Review: The Batman Who Laughs #7 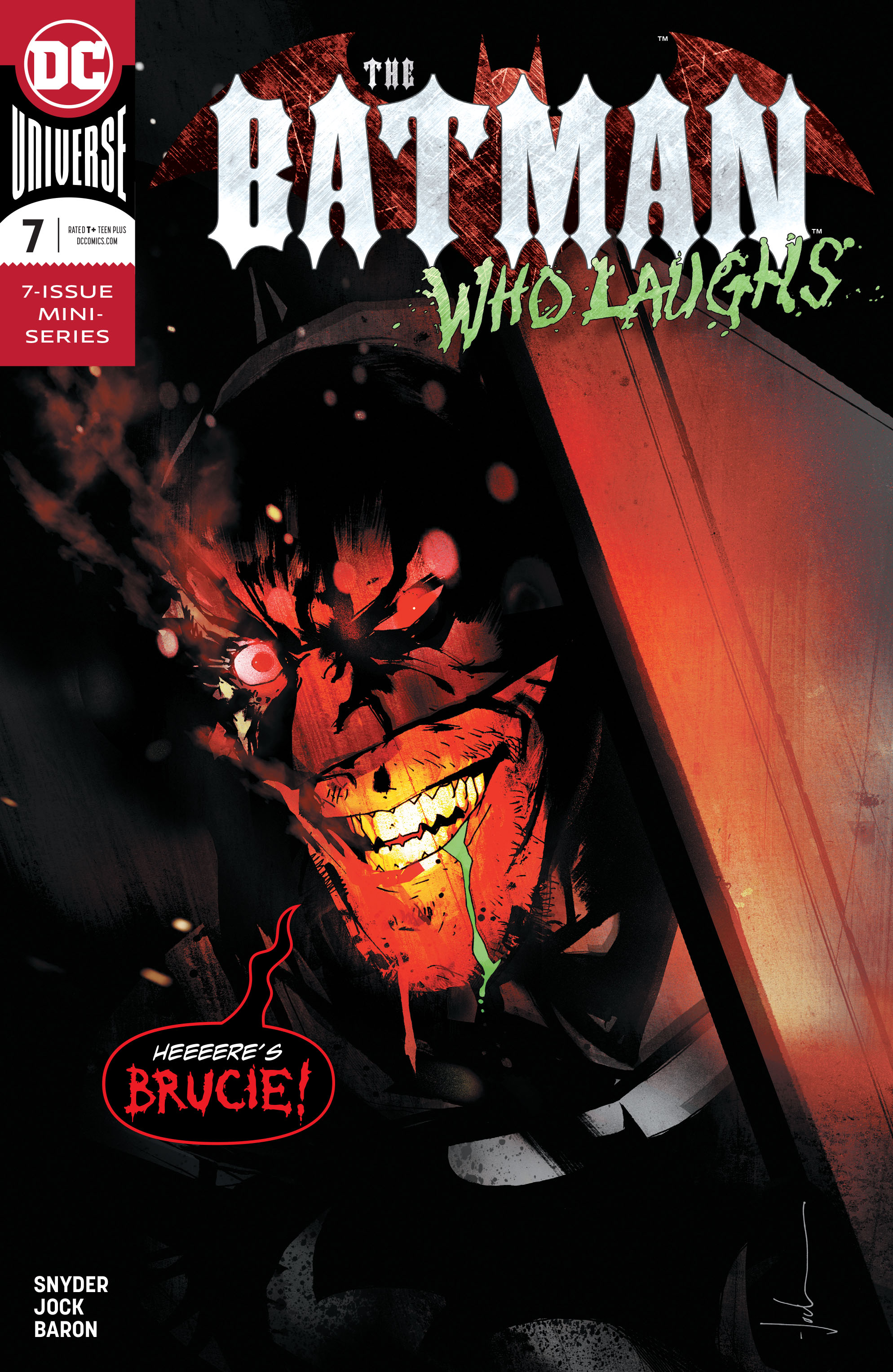 Overview: Batman looked into the abyss and did not blink.

Synopsis (Spoilers Ahead): Just as Bruce’s transformation into the Batman Who Laughs is near final, he wonders if others have this clarity like he does right now. He asks if others have had that moment when things just made sense and they understood it. Because right now, he has achieved true happiness because he is the person he was meant to be. He does not have to fight his nature any longer. He does not have to hide behind his mask; he can stand in the sun and be himself.

The Batman Who Laughs asks Bruce if he was right: does it feel good to let go of old Bruce and embrace the Batman Who Laughs? When the syringe of Bruce’s blood turns red, it means the transformation is complete, and the plasma will be used to make the last bit of serum which will poison Gotham. But, it also means something else: There can only be one Batman Who Laughs, and today they will fight to the death for that title.

The Batman Who Laughs admits Bruce almost pulled a fast one. Any syringe he would use would most certainly be Wayne Tech. Bruce would be able to tamper with the syringe and turn the light red when in reality he would be in full control. The Batman Who Laughs finds it odd Bruce has not changed yet, but that is none of his concern at the moment.

Just as the drones are about to release the toxin, the Grim Knight holds Gordon under the infected water telling him to have a sip. Either he can do it voluntarily or the Grim Knight can make him drink. Gordon pleads again for James’ help, but he says he will not help. But, he changed his mind after watching his father drown by the hands of the Grim Knight, and he uses his knife and stabs him. While slicing the Knight, James shouts if his dad wants to know how it feels. Does he want to know what it is like to have this urge to kill? Gordon catches his breath and tell James to stop. James has stopped the Knight, and they need to find the remote to stop the drones.

However, Bruce prepared the hardest to defend himself from his evil counterpart’s argument that out of all Batmen in existence, he is the least happy, least effective, and worse. And when Bruce looks at all the Batmen in the Dark Multiverse, he agrees. He is the worst Batman, and that realization hurts. The hardest thing for people to do is take a moment and see all the parts of themselves they do not want to see. Struggling to take the harpoons out, the Batman Who Laughs says Bruce is the worst and a joke. Bruce says it may be true, but who is a bigger joke than the worst Batman, the Batman he beats. Bruce uses his mother’s tombstone to whack him in the head.

Alfred tells Bruce his eyes are now completely red, and his transformation is complete. It is time for Bruce to get help. But, Bruce ignores him. This feeling is the best in the world; more people need to feel this freedom like he has. He screams thank you over and over again, and the Joker tells him he is welcome as he points his gun at the Batman Who Laughs and shoots him.

Several days later in the cave, Alfred agrees with Bruce’s decision to melt down the dark metal. He asks if the transfusion has held up, and after two weeks it seems to have. Alfred does not believe the analysis of the boy’s blood. His blood seems to be like embryonic stem cells. Bruce says the boy is different. He has not faced the horrors Bruce has had. His last words before sending him back were about one fateful night when his parents wanted to go to the theater. Whatever happens, his parents must not go.

Alfred tells Bruce he is proud Bruce overcame the toxin, but Bruce says it was just sleight of hand. Joker’s toxin had a deceleration agent in it which slowed down the effects of the transformation. Alfred still disagrees. He remained true to himself until those last moments. But, Bruce meant what he said in the latter moments. All of the Bruce Wayne’s who gave up Batman for love or ambition were more effective in changing their cities, and they were also happier. Gotham is a city built on secrets where the one goal is to win. Alfred says the Batman Who Laughs is a monster and a nightmare. Bruce agrees he is a nightmare, but all nightmares are built on truth. According to the Joker, to win, you must accept there is no meaning in your actions. Batman is about believing all your actions matter in to win. The Batman Who Laughs is about saying there is no meaning your actions, therefore the only meaningful action in this life is to win. If there is no grander meaning, then at heart we are cold, animalistic, and selfish things.

Alfred asks if that is who we are, then where is the light? Bruce does not know, but the Batman Who Laughs spoke about learning from a bat. He said a bat, being the only example of a mammal who can fly, is an example of what we can achieve if we embrace our primal nature. He might be wrong. A bat is not designed the way a bird is. A bat uses its own flesh for his wings. A bat’s flight is about defying what comes naturally and achieving what is hard, painful, but sublime. And for better or for worse, that is Batman. Batman is about defying our true nature to be better than you are supposed to be, day after day and night after night. The truth is, Batman is not about knowing who you are, but who you want to be.

Alfred agrees with Bruce but tells him he had his blood tested and there was no deceleration agent in the toxin. Bruce says that is impossible. But Alfred says Bruce did not change because he is Batman. Bruce starts to disagree, but Alfred tells him that maybe the biggest joke is Joker taking credit for something Batman achieved himself: what better joke is there than to have Batman slowly give into madness.

After leaving his son, someone asks if Gordon is okay because he does not look good. After walking past the person he mutters he has never felt better. After taking off his glasses, it is revealed his eyes are red just like the Batman Who Laughs.

Analysis: What an ending! Wow. This has been one of the best mini-series I have read. Snyder was great and Jock was masterful.

Jock was a perfect choice for this series, and his pairing with Snyder was perfect. It seemed like there was a great amount of synergy between the two because Jock’s art complemented and enhanced the story so well. He captured the horror vibe Snyder was going for. The art alone deserves a 5/5 rating.

I was worried about James, but Snyder gave him a path of redemption. He is not defined by his condition; he is defined by his humanity. We all struggle and fail. We all have powers within ourselves that conspire within us. The war between our good and bad selves is ongoing, but we always have hope for a brighter future.

This is Snyder’s best work. But the thing is, this was a decent Batman story. What set this apart from his other works is his meta-analysis on Batman and humanity. I love his explanation of who Batman is. Batman is about overcoming our fears and insecurities and being our best self. We can have the courage to stand up to our base nature. We can look to Batman for strength to stand for what is right. He is the hero we deserve, and the one we need right now.

To those who are broken and hurting, we can look to Batman for strength. He lost his parents when he was young. He watched as his mother and father were shot and their blood pooled underneath them in Crime Alley. He swore to not waste his life, and he became a beacon of hope. The night is darkest just before the dawn.

To those who feel oppressed, we can look to Batman for courage. He had the courage to move past his fear and conquer it. He escaped pain and used it to be something else, something more. He used it to help his people, the people of Gotham because many have been through what he has been through.

To those who are scared, we can look to Batman for hope. He looked into the abyss and he did not blink. He saw the worst version of himself, and he felt how good it was to not care about anything. But, he rejected that life. We are more than our fears. Batman wages his war against crime because he believes humanity is still worth saving.

Even in this crazy world, our actions matter. We matter. Even among the almost eight billion people on this planet, we are still heard. What we do each and every day makes a difference even when we seem so small. It is not just about who we are underneath, but what we do that defines us.

We can be better, and Batman is the symbol of hope. He is our inspiration to fight and dream.

Final Thoughts: So, it is revealed Gordon is one of the Secret Six which the Batman Who Laughs has turned. I guess we can find out his fate in Batman/Superman!