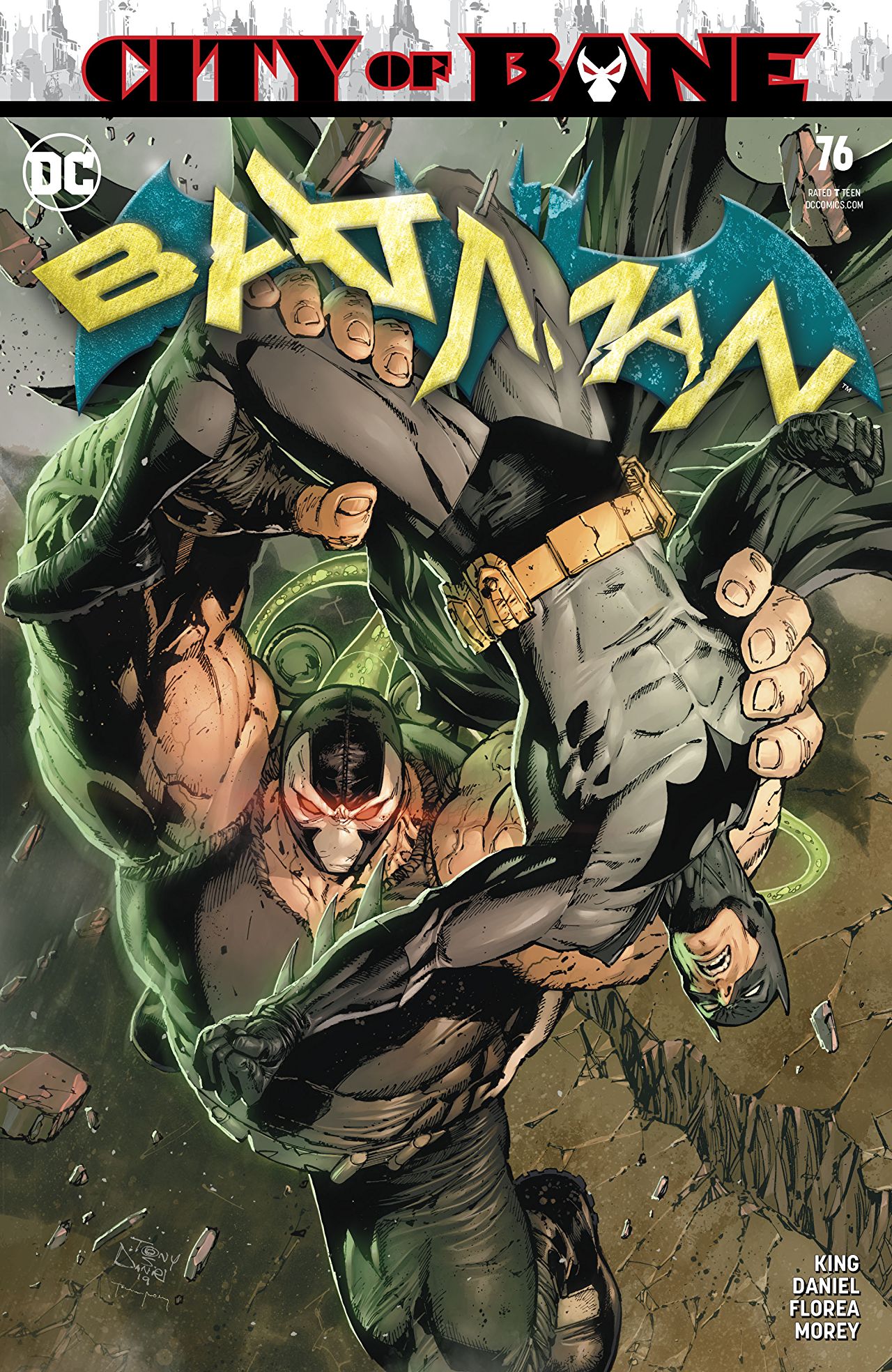 Synopsis (spoilers ahead): The issue opens with a full page of Catwoman in Paris with a satchel in her hand before cutting to Captain Atom being met by Gotham Girl high over Gotham City. Captain Atom has disobeyed orders from the government to stay out of Gotham, and their conversation is cut shorty by Gotham Girl punching Captain Atom out of the sky.

Below on the streets of Gotham, Kiteman, Scarecrow, Tweedledee, and Tweedledum are running for their lives. Tweedledee (or Tweedledum, it’s not clear) falls after a gunshot wound. The rest continue to run as the shadow of the Batman falls over them, revealed to be Thomas Wayne’s Batman, gun in hand. The three crash through a window to make their escape as Gotham Girl continues to beat down on Captain Atom on the Gotham streets.   Kiteman attempts to carry his fellow fugitives to safety on his glider, but it’s too much weight and after a dose of fear toxin from Scarecrow, Tweedledee (or Tweedledum) falls from the sky as Kiteman and Scarecrow glide to safety all as Gotham Girl picks up Captain Atom over her head and hurls him out of town.

Meanwhile in Paris, Catwoman enters a skylight to an apartment where an unconscious Bruce Wayne lays on a ratty old couch. Kiteman and Scarecrow lay low at Kitman’s hideout as a hospitalized Captain Atom is visited by Tim Drake’s Robin. Meanwhile Catwoman talks to the unconscious Bruce about the work of art she stole. Kiteman and Scarecrow are interrupted by Thomas Wayne’s Batman who takes them both down.

Tim Drake stands on a rainy rooftop overlooking Gotham with another Robin, Damian Wayne, and the two of them speak about how Alfred is being held hostage to keep any of the Bat-Family from stepping foot in Gotham. The two nearly come to blows they continue to stand in the rain, with Damian asking Tim what they should do now.

Selina speaks to the unconscious Bruce about how the stolen painting will pay to hide and care for him and tearfully promises that if he wakes up that she won’t steal again. The issue ends with Thomas Wayne and Gotham Girl standing over a quiet city, as Gotham Girl remarks that they have won.

Analysis: This issue is essentially more world-building, with Tom King continuing to establish how far Bane’s control extends over Gotham City. The only thing is, we don’t really find out anything new in this issue about Gotham being under Bane’s control. We knew that Thomas Wayne’s Batman was hunting down the villains of Gotham City for Psycho Pirate to brainwash. We’ve seen how immeasurably powerful Gotham Girl can be. We knew that Alfred is being held hostage to keep the rest of the Bat-Family away. We knew that the government has agreed to stay out of Gotham. While in a visual medium it is always better to show and not tell, we were already told all of this so I can’t help but to wish we were shown something new. I would have loved to have seen an explanation to have a few blanks filled about how Bane seized control of Gotham City once Batman was out of the picture or give us more time with Bane.   There are a lot of unanswered questions in this story to get to without repeating information from the first issue.

That being said, what we do get in this issue is well executed. There’s a feeling of hopelessness that rests over the book that I think works for this part of the story.   The sequence of Gotham Girl beating the protons off of Captain Atom is cinematic and gets across Gotham Girl’s powers. Later in the dialogue between the Robins, there is a reminder about how such a use of her powers takes years off of her life. I hope that at some point in this story Gotham Girl gets explored further. It’s been established that she is well aware of what using her powers will cost her and I think it would be a missed opportunity to not explore why exactly it is that she is back on such a self-destructive path.

I did enjoy the moments with Tim and Damian in the book and you can feel frustration they both feel over being so powerless. I also enjoyed seeing both Robins in the main Batman title, something we don’t get a lot of these days.  I would have liked to have seen an acknowledgment of how the last time the Bat-Family saw Bruce, they called into question Batman’s sanity and I feel that their lack of faith in Batman needs to be explored at some point.

The only new information seems to be that Bruce Wayne is pretty significantly injured following being ambushed in the last issue.  We don’t really get a lot of detail, but I enjoyed seeing Selina caring for Bruce and her tearfully asking for him to wakeup is an effectively bittersweet moment. I do hope that Bruce isn’t left off the board for too long as I think we are getting to a point where I just want to see Batman return and start punching things.

Tony Daniel does his usual stand out job with the art duties, particularly in both the Gotham Girl sequences as well as the Robins in the rooftop of a cold rainy night.

Final Thoughts: It’s a well-executed issue that I think does a great job of conveying how hopeless things are in Gotham City, but I think that I would have preferred to get the story moving. On to the next issue.