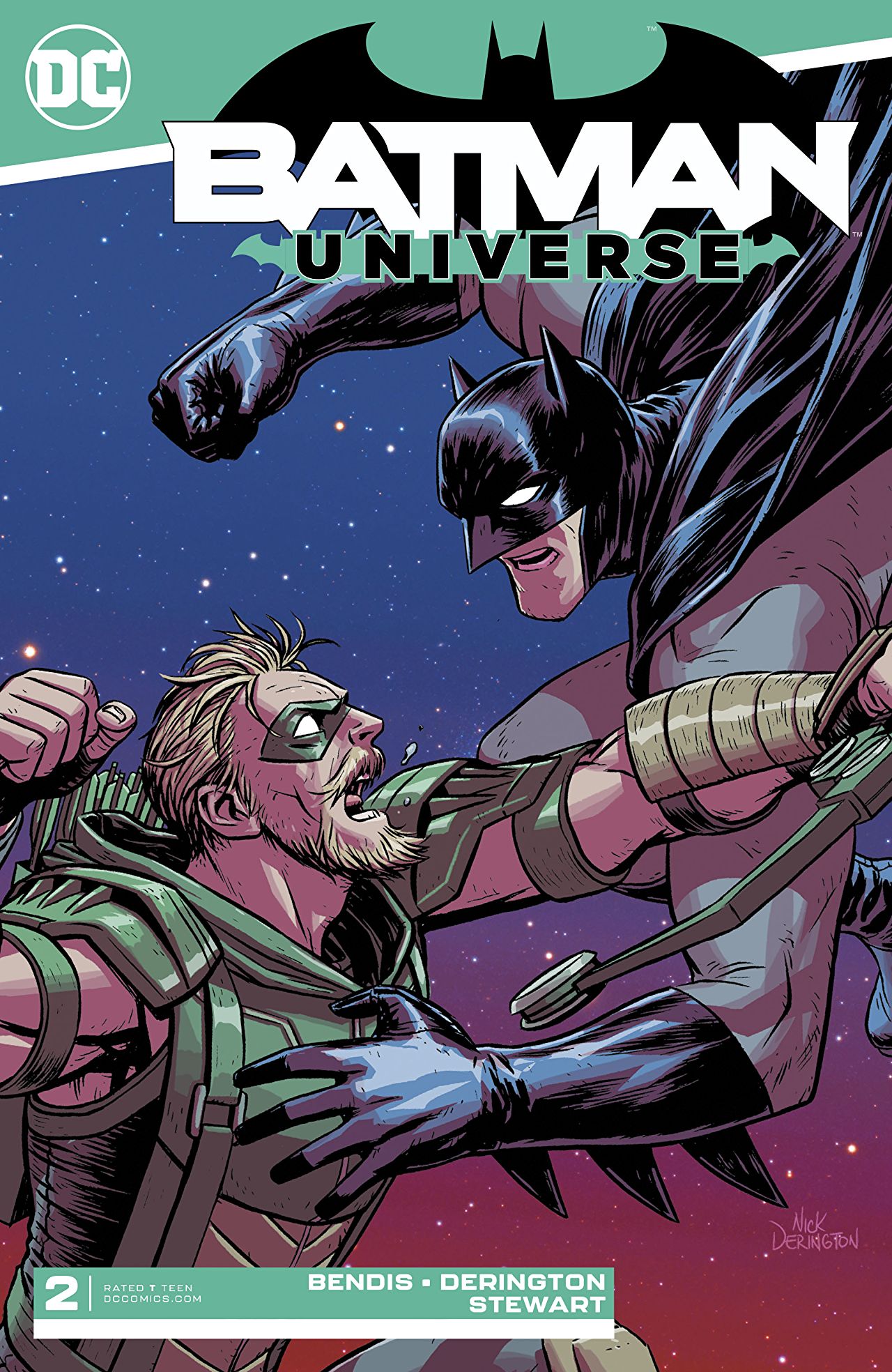 Overview: Batman and Green Arrow are in Amsterdam on the trail of the Riddler and the stolen egg! Plus, Gorilla City!

Synopsis (spoilers ahead): The issue opens to Green Arrow and Batman in Amsterdam fighting Riddler who is getting steadily less intelligent with more basic riddles the longer they converse and fight. Riddler escapes, with the egg that is the object of everyone’s attention but Batman has placed a tracker on him. Green Arrow opens a box that was in Riddler’s possession which triggers a neurotoxin that infects him, turning his eyes red and making him mindlessly aggressive, engaging against Batman before Bruce manages to inject him with the antidote which brings Oliver back to sanity.

A physically and mentally incapacitated Riddler brings the egg to his mysterious overlord, who turns out to be Vandal Savage. Batman meanwhile is doing some research on the virtual Bat Computer running down leads on Riddler and the egg, which contains radiation that scrambles brain waves, explaining Riddler’s disintegrating intelligence.

Batman follows the trail to Gorilla City as he banters with Alfred, turning himself over to the imperial guard, requesting an audience with King Nnamdi, their leader. The King knows nothing of the Riddler and is suspicious of Batman’s motives, but after his telepaths confirm he is telling the truth he gives Batman his weapons back and they follow the tracker to the Riddler, unconscious, with a note from supposedly Superman. The egg which Riddler was holding suddenly shines as Batman takes it into his hand, and he is transported to the Hawkworld of the planet Thanagar!

Analysis: The first thing to notice about this issue is the sumptuous artwork of Nick Derington who brings his A-game to the entire issue. For me, this was my introduction to this artist who’s unique, fun style is addictive and sells a story that is pure popcorn fare. I’m intrigued by his work which revels in a beautifully drawn Batman and gorgeous splash pages of Gorilla City and I will take it upon myself to dig into Derington’s back catalog after this strong outing.

The storyline which Bendis is bringing us is quite light and quite slight, but it’s definitely hitting better heights than the first issue which I was not overly fond of. By playing almost a shell game with the audience, quickly moving from location to location, there’s a welcome slickness to proceedings and it lifts it far away from the meandering almost formless “quippy” conversations which have sadly become a Bendis trope through so many of his latter-day books. That said, there’s still a certain weakness to some dialogue moments and some of the line delivery for Batman is way off, especially in his conversation with Green Arrow, which forces this reader to have to imagine the late great Adam West is back to delivering Batman’s lines, so corny and hokey as they seem – although of course this is a modern Batman comic and frankly there are still moments when Batman doesn’t sound like Batman, which is a problem.

So what are we left with? A flawed but interesting and quite ambitious issue. The end scene with Batman jumping to Thanagar is a strong move, and again Bendis is keeping the events moving quickly, almost as if he’s working against his own modern tendency to slow proceedings to a crawl. It definitely is one of the strongest Bendis issues I’ve read in years – but that compliment comes with several caveats. When I look at this as one of the Walmart comics, this issue serves as a splendid introduction to Batman and the DCU. And really, wasn’t that the goal all along?

Final Thoughts: A vast improvement over the first issue and an excellent advertisement for Batman and the DC Universe. Worth picking up.