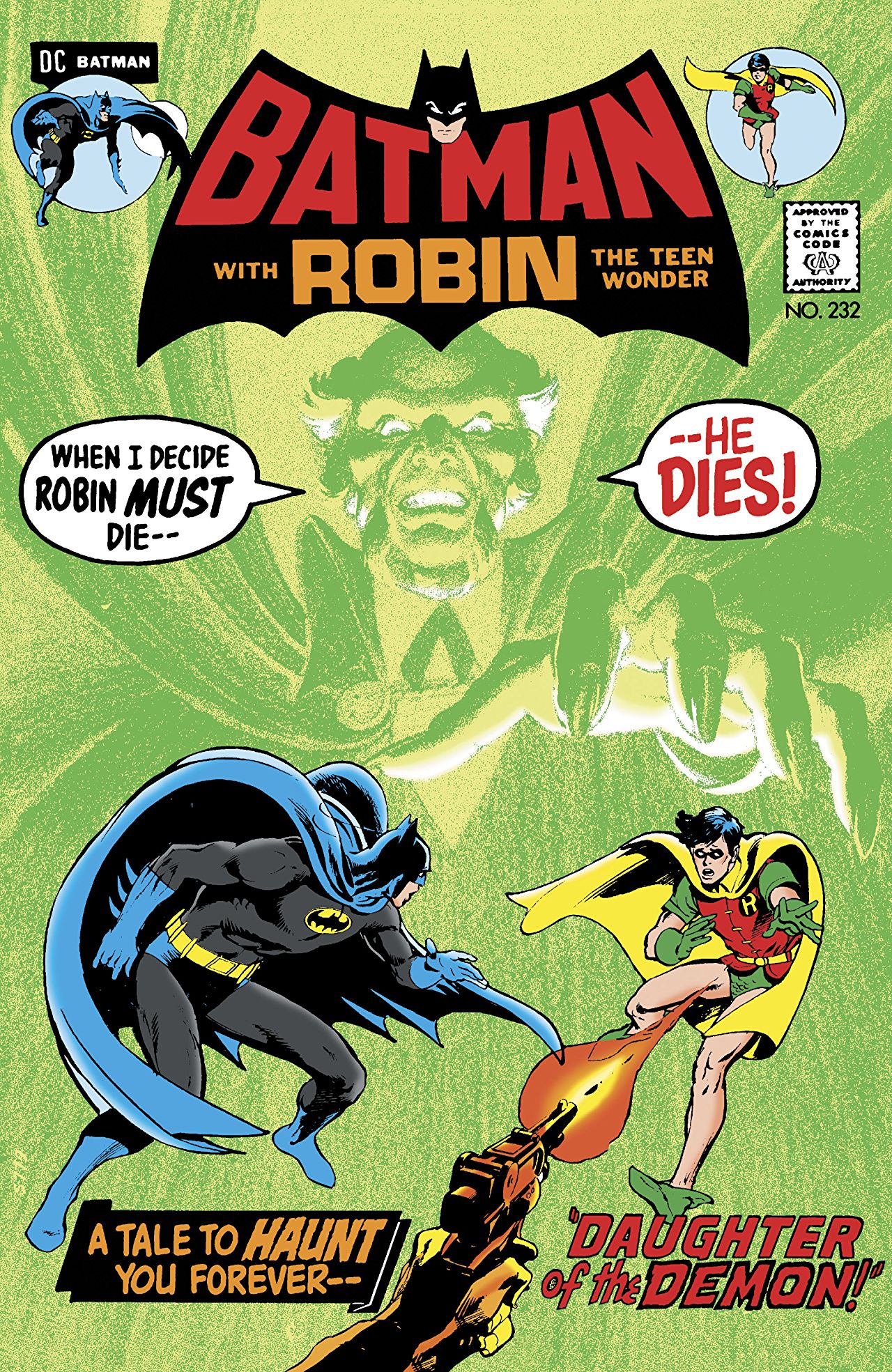 Editor’s Note: DC has launched a new line of comics known as facsimile editions. Those unfamiliar with what exactly facsimile comics are, they are exact reprints of the comics including the original advertisements from when the comic was first published. The goal of the line is to feature some prominent moments from within history that might also tie into current stories as well. While the following review is not of the exact print version of the new edition, it is a review of the original story published in the new edition.

Overview: Dick Grayson is kidnapped and Batman must join forces with the mysterious Ra’s al Ghul to save him. Can Bruce trust this stranger?

Synopsis (spoilers ahead): The opening page of this comic hits hard with a dramatic shot of Dick Grayson being shot by unknown assailants while returning to his dorm at Hudson University. Bruce receives a letter containing only a picture of Dick bound up somewhere and a single message. “Dear Batman! We have Robin. Save him if you can.” Bruce Wayne quickly puts on his costume as leaves his city penthouse to return to Wayne Manor, which has become dark and dusty at this time. Needing access to the Batcomputer in the cave below, he makes his way through the secret passage behind the grandfather clock and descends below the mansion.

In the recesses of the Batcave, Batman runs into a mysterious and wisened figure, who addresses himself as Ra’s al Ghul starting the conversation with a simple “You will be seeing much of me”. How audacious, yet prophetic of the next forty years in Bat-Family comics. He is accompanied by a large muscular man and explains how he deduced Batman’s secret identity before also explaining that his daughter Talia has been kidnapped and he wants Bruce’s help in uncovering her kidnappers. Bruce has already encountered Talia once before a few issues prior.

Using the Batcomputer, his own forensic equipment, and his detective know-how, Bruce deduces the kidnappers are the “Brotherhood of the Demon” and they are in Calcutta, India. He goes to lead them there, only to be pushed aside by Ra’s bodyguard. Seems Bruce made the fatal flaw, Ra’s always goes first. They leave for Calcutta on Ra’s private jet while Bruce broods to himself dreaming about the night his parents were killed. This progresses to a quick summary of Bruce’s training montage and how he developed the skills needed to become Batman.

While in Calcutta, Bruce disguises himself as an old beggar in order to lure out thugs. After collecting enough information from random thugs, Bruce and Ra’s make their way down a backstreet. Bruce once again attempts to walk before Ra’s down the street but is pushed away by Ra’s bodyguard. They find a house down the street and Bruce enters first, only to be attacked by a leopard guarding the room. After singlehandedly defeating the leopard, they uncover a map with faint markings highlighting a passage up the Himalayan mountains. Ra’s finances an expedition and they scale the mountain.

As they ascend, they are attacked by a sniper. Sitting ducks, Bruce is forced to act quickly using momentum to swing to safety and pursue the sniper. He then uncovers a cave with smoke and the smell of food. A helicopter flies overhead and Batman seems to have solved the case already. He pushes past the armed guards who don’t even make an effort to scratch him. Inside, he finds Dick bound and surrounded by guards, but Bruce just ignores them, going straight for Dick and talking extremely casually with him. When the guards attempt to stop him, Bruce begins to monologue like he’s Sherlock Holmes, explaining just how he solved the mystery exactly. He reveals that it was all Ra’s al Ghul’s plan all along. Bruce and Dick team up and defeat the guards with ease.  Bruce challenges Ra’s bodyguard to a one-on-one fight and takes him down in three punches, felling the giant with little effort.

In the end, it is revealed that the whole reason behind this entire charade was that Ra’s wanted to test if Bruce was worthy of marrying Talia, as she had fallen in love with him. Want to see how Bruce reacts to this reveal? Track down the next issue as that is where this story ends.

Analysis: Denny O’Neil is famous for bringing an element of James Bond to the Batman mythos, and this is no more obvious than with Ra’s al Ghul’s debut issue. Like any James Bond movie, the mystery isn’t as important as the adventure itself. Sadly we had to compress an entire novel or movie-length adventure to a single comic, so elements that would take twenty minutes to really immerse the audience in are boiled down to three to five pages. The investigation elements are almost handed to Batman. He’s basically given everything he wants just by turning a corner.

The battle against the leopard and the sniper are excellent showcases of what Batman is capable of, and Ubu acts as a great physical foil to Bruce. I mocked him in the synopsis earlier about how Bruce takes Ubu out in three punches, but it is incredibly rewarding to see the guy who’s been pushing Bruce around and acting like a jerk to get his comeuppance.

The beginning of the comic is a little strange for some readers I imagine, Dick being in college and Bruce no longer living in the Manor, but I hope people who read this comic will see this as an opportunity to learn about what the Batman mythos was like back then, how it changed with the coming of the Bronze Age, and the departure of the Silver Age.

Final Thoughts: Overall, the story isn’t some great narrative masterpiece. It’s a roadside adventure you can read, have a romp and put it next to the rest of your collection. Just wait until later on when Ra’s really starts showing off why he’s a genuine threat to Bruce.