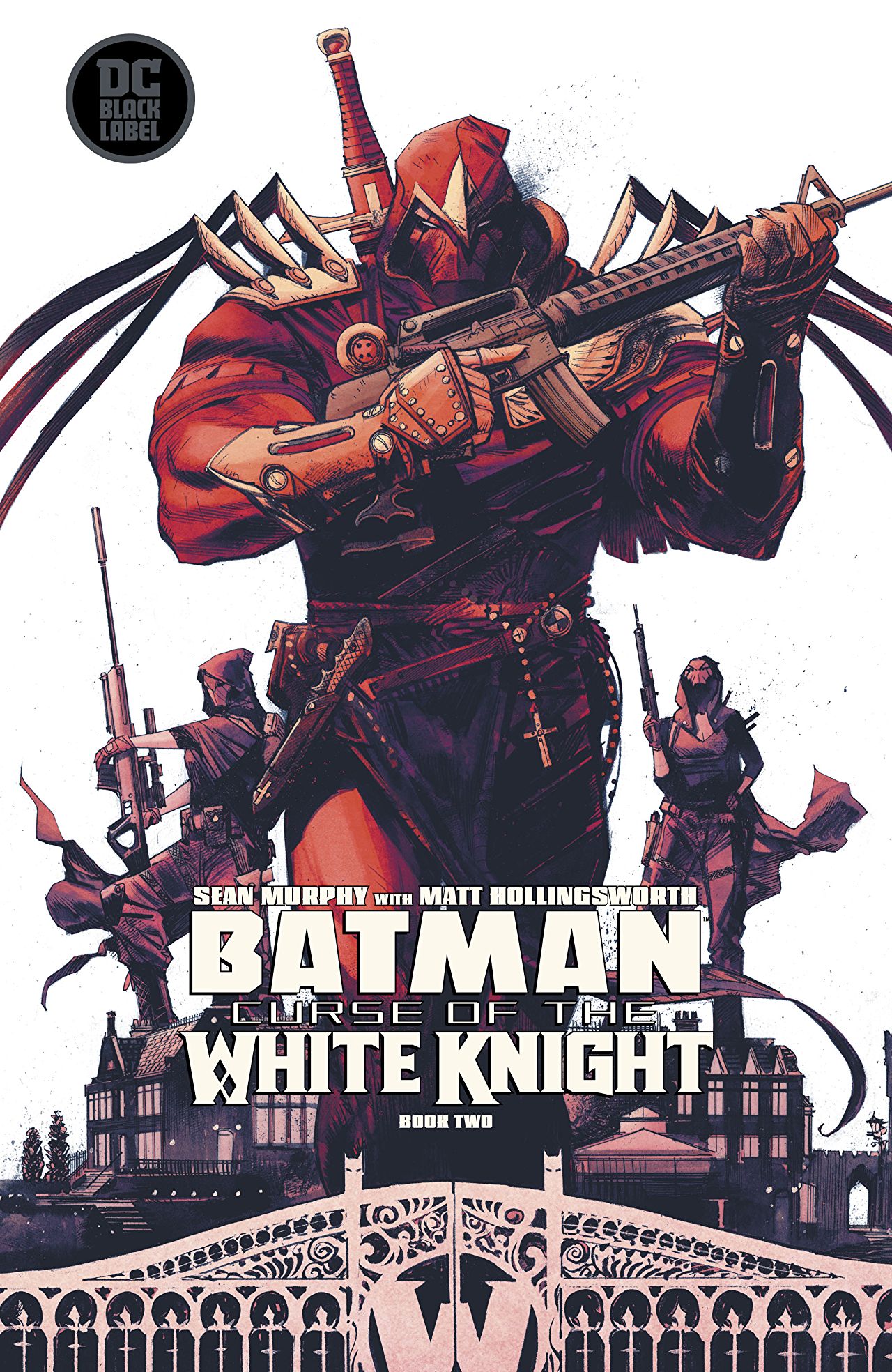 Overview: Azrael unleashes the fire and fury of his mission on Batman.

Synopsis (spoilers ahead): Four hundred years ago, Edmond Wayne is arrested in England for trying to reclaim his family’s ring. The authorities claim there are no records of him in the Wayne family, so he must be a bastard or a ghost. In the prison wagon, a strange, white-bearded priest offers Wayne a plan of escape and an ornate sword, contingent upon his accepting God’s plan for his life. When Wayne accepts, the priest kills the guards driving the wagon and uses shuriken (flying ninja stars) to kill the accompanying horsemen.

As they board a ship for the New World, Wayne records his horror at the priest’s actions. Edmond learns that the priest’s name is Bakkar, and his origin is from Turkey, as a part of the Order of St. Dumas, a splinter group of the Templars. Wayne learns of their mission – to liberate Gotham Village from Lafayette Arkham, a vampire. On the journey, Bakkar trains Edmond in the arts of war and strategy and tells him the price of the Order’s help is half of Gotham.

In the present, Bruce receives a visit from a sinister woman named Ruth, who threatens ruin if he goes forward with his plan to reveal his identity as Batman.

Jim Gordon, running for mayor, admits the truth of Jack Napier’s claims about Gotham, but the Joker crashes his campaign speech and reveals that his daughter Barbara is actually Batgirl.

In the meantime, since Bruce refuses to cooperate with her blackmail, Ruth turns to Jean-Paul Valley, Azrael, and his sniper team of Michael Lane and Gabriel, to kill Batman and other key Gotham players who stand in her way.

Jim confronts Barbara about her secret life, and turns on Batman as well in his anger, as Bruce comforts Barbara.

In desperation, Batman visits Harley Quinn, but learns she has no interest in helping anymore, and is also pregnant with Jack Napier’s child.

Azrael and his team suit up in the flames and red of St. Dumas, while Batman researches the history of his ancestors. His investigation is interrupted by Azrael broadcasting a challenge, and then taking control of all his Batcave technology. Batman manages to wrest manual control of the Batmobile to escape, but Wayne Manor explodes.

Analysis: In the second chapter of his Elseworlds (nicknamed “the Murphyverse”), Sean Murphy provides both intriguing mysteries and intense, fiery action. From the opening scene, inspired heavily by the classic novel The Count of Monte Cristo (the main character even shares the name of that novel’s protagonist, Edmond), this story drips with references and fun. The use of the Order of St. Dumas as entwined with the history of the Waynes and their struggle for justice and family is a great idea, as is the level of threat evinced by Jean-Paul due to his military training and fervent belief in the righteousness of his mission. As Azrael has always been a foil to Batman, highlighting differences and similarities, we see Batman struggling with his lack of conviction just as his enemies are most dedicated. Bruce can’t decide whether revealing his identity would do more harm than good, but Azrael believes that the Waynes’ treachery to his order centuries ago, as well as his violent actions as Batman, justifies completely his brutal assault and attempted assassination. The mysterious Ruth also shows the civilian forces arrayed against Batman, and the Joker turns Jim Gordon against his own family as well as our hero. In general, we’ve gone from a dark situation in the first chapter to a completely desperate one here.

As an artist, Murphy also shows just why his work is so popular. Utilizing strong narrative panels, and the judicious use of full-page spreads, the story rockets along through the dark plotting and the explosive action at the end. Though the density of the plot and action rather detracts from much character progress, the way the characters are drawn gives a lot of that to readers without scripting. The small moment where Batman embraces a weeping Barbara after her father berates her speaks volumes about their relationship and Bruce’s character.

The cover by Murphy shows three members of team Azrael setting up for a sniper and machine-gun assault – very cool. The difference between the classic Flaming Sword of Azrael image and the modern military look is a really cool contrast, as is seeing a team of Azraels. After the robot army of Ascalon in James Tynion’s run of Detective Comics, and a similar concept in Justice League Odyssey, seeing this version adds to the iconography of the character, showing once again the additions that Murphy brings to the Batman table.

Final Thoughts: Murphy deepens the history of the Wayne family and brings immense pressure to bear on Batman and his family in this excellent issue.