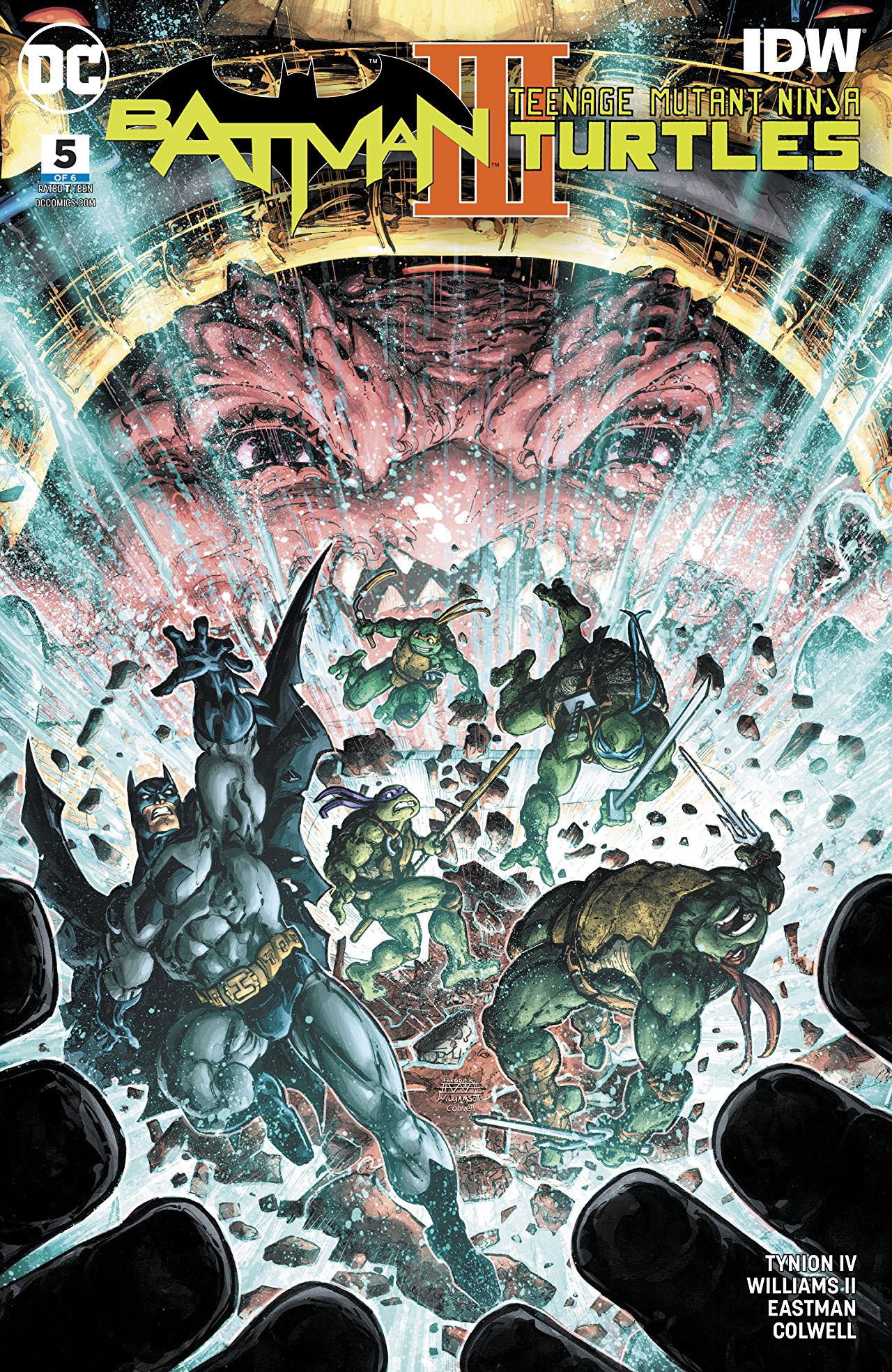 Overview: It’s a battle royale as everyone tries to take down Krang’s army.  A recovered memory pushes Batman to seek out additional help.

Synopsis (spoilers ahead): Batman and the Turtles fight the army Joker summoned in an attempt to gain control of the device Joker possesses.  Batman gets through and takes the device from the Joker, however, he suddenly remembers Jason being killed by Joker.  Batman realizes they cannot win without the help of the Bat-Family and leaves to try and find them.  Shredder summons the Foot Clan to deal with the robot army as Master Splinter, Alfred and April go after Batman.  The Turtles use the device Batman took from the Joker to jump through the portal.

Splinter and Alfred are confused why Batman would seemingly run from the fight.  Batman explains that he didn’t run, but that he is looking for help.  They find him on a rooftop where he has switched on the Bat-signal.

In his technodrome, Krang is upset that the heroes are not dead yet as the Turtles watch him from the shadows.  The Turtles silently free their black and white versions that were being held captive.

Back on the rooftop, Krang’s dome appears visible above the city.  Batman explains to Splinter and Alfred that he has never been alone as Nightwing, Batgirl, Red Hood and two Robins (Tim and Damian) step out of the shadows.

Inside the technodrome, the Turtles and another version of Batman have tampered with Krang’s device.  Their sabotage was not unnoticed and Krang realizes they are there somewhere.  Batgirl gets on comms and coaches Donatello through using the Mother Box.  Batman and the Bat-Family appear via a boom tube as everyone braces for the final fight.

Analysis: While it is fun to see all these characters interact with each other, I can’t help but feel like something is missing and am a little disappointed after reading this issue.  There are some bright spots, but I am going to start with what I think is the central problem with this issue and the larger story as well.  The Krang/Anti-Monitor character was introduced in the first issue as this extremely powerful being with hints at a complex plan or reason for why he was doing all this.  It’s been five out of six issues and all he says is that he has “plans you couldn’t believe” and “this is just the beginning”.  Based on how everything has played out so far, it seems pretty clear that he has no plan and the way everything is falling apart seems entirely preventable for such a powerful character.  So, taking all that into account, I don’t think Krang is a very good or complex villain for the story.  I know it’s only a six-issue mini-series so there are limits to what can be accomplished in terms of layers and complexity, but I do wish we got something a little more.

Since Krang is a very vanilla villain, the plot itself has been pretty straightforward and predictable.  Something that can still work if there are subtle twists and turns in the journey to the inevitable conclusion, but I just don’t think we got any.  Even in this issue, the return of the Bat-Family is played for suspense over the course of a few pages, but the problem is that the reader knows it’s coming as soon as Batman first remembers Jason’s death.  The return of the Bat-Family should have been a big emotional moment where everyone is reunited.  Unfortunately, they are given no lines of dialogue and we don’t see them reconnect at all.  Batman makes a great speech to Alfred and Splinter about feeling alone and realizing he isn’t, and then we never really see the story capitalize on that by having him interact with the Bat-Family.  It’s a great moment and speech, but it feels unfinished to me.

All that said, the issue is an old-fashioned brawl between the heroes and villains.  It will always be cool to see characters crossover like this and still remain very much in character.  The art continues to be excellent and I continue to be a big fan of Williams and Colwell’s work.  As I’ve said in past reviews, they bring a unique style and aesthetic to comics that I don’t think is found elsewhere.  While this story has become a bit too predictable for my taste, it may still be great for many based on the fun factor and art alone.

Final Thoughts: If you are into large scale action and superhero fights, then this issue is definitely for you.  Just don’t expect anything more than a fun crossover with action and beautiful art.