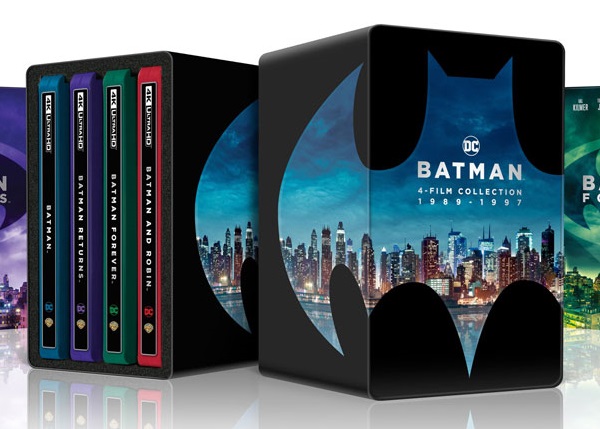 Earlier this year, Warner Bros. announced that they were releasing the Tim Burton and Joel Schumacher Batman films in 4K. Each of the films released individually back in June. Today, however, marks the released of the collection of all four films packaged together. Priced at $90, you can purchase the set over on Amazon.

You can also find a special SteelBook edition of the collection over at Best Buy for the same price of $90.

Interestingly we also discovered another recent collection of Batman films which we hadn’t heard anything about previously. A special Batman 80th Anniversary Collection was released two weeks ago on Blu-ray and includes eighteen different films. While not an entire collection of every single Batman film ever made, it does include a good group of animated films. The collection includes Batman: Gotham Knight, Batman: Year One, Batman: Under the Red Hood, Batman: Bad Blood, Batman vs Robin, Son of Batman, Batman: The Dark Knight Returns Part 1, Batman: The Dark Knight Returns Part 2, Batman: Assualt on Arkham, Batman: The Killing Joke, Batman and Harley Quinn, Batman: Gotham by Gaslight, Batman: Ninja, Batman: Return of the Caped Crusaders, Batman: Mask of the Phantasm, Batman: Mystery of Batwoman, Superman/Batman: Public Enemies, and Superman/Batman: Apocalypse. Priced at $90, you can also order this over on Amazon.