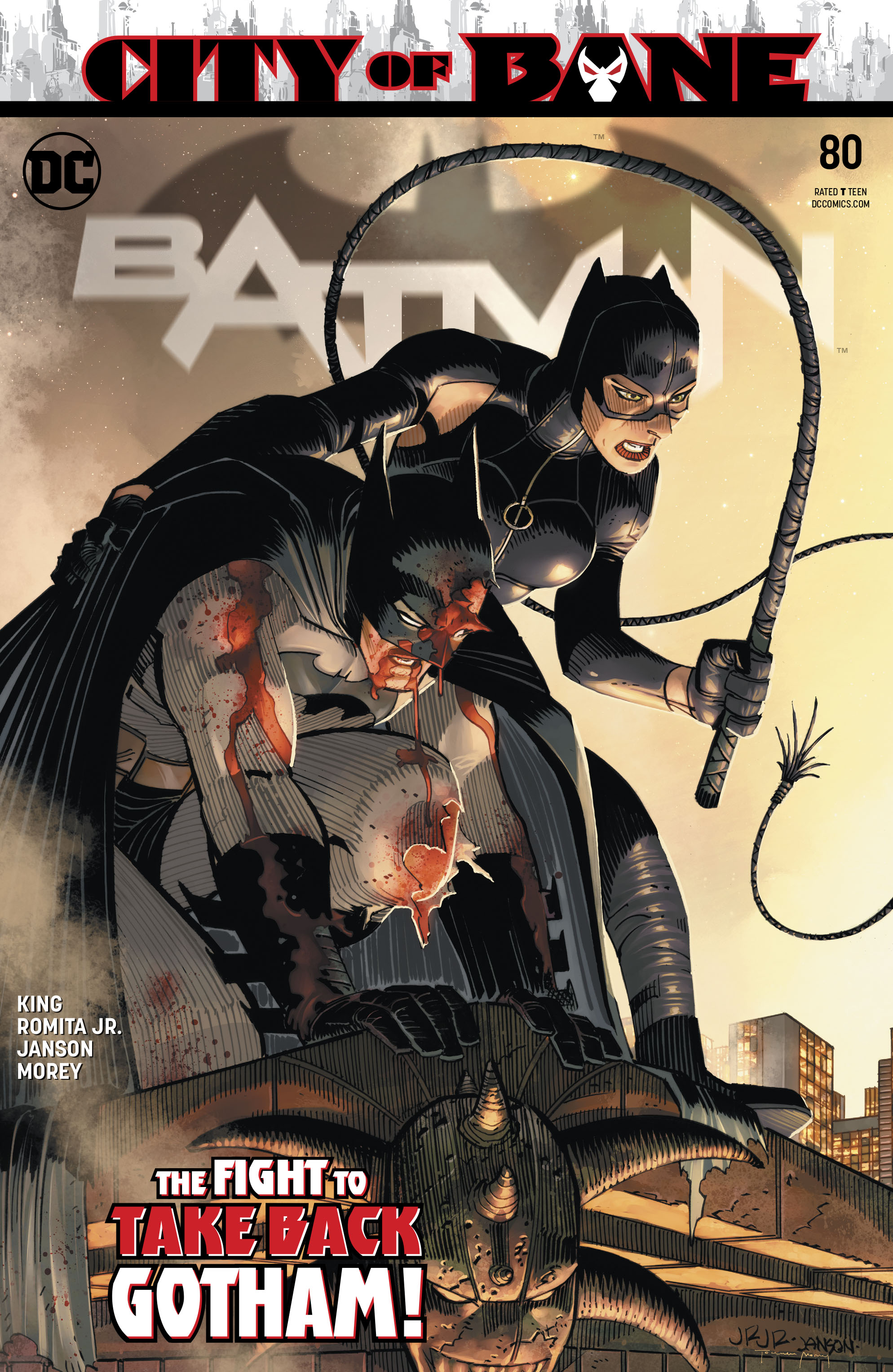 Overview: Batman and Catwoman return to Gotham City to take on Bane.

Synopsis (spoilers ahead): A lone figure in a hat and trench coat walks through an alley on a rainy Gotham night when he is approached by two police officers, Professor Pyg and Two-Face. The two attack the figure for breaking curfew, and the figure knocks them both to the ground.   Two-Face tells the man that he is dead, asking if he knows whose city this is, shooting him point-blank range in the chest, to no effect. The figure declares that the city is his and as Two-Face realizes who it is he has been dealing with, Batman knocks him out before ripping open his shirt to remove the two stopped bullets from the Batsuit underneath his disguise.

Thomas Wayne’s Batman meets with Hugo Strange on the roof of Police Headquarters to speak about Pyg and Two-Face not checking in yet. Thomas tells Strange that Batman has returned and that he’ll tell Bane, with Hugo left standing alone on a rooftop, telling himself that there’s no way Batman could have returned from being broken.

Another “Police Officer”, the Mad Hatter, stands on a street corner, twirling a billy club when he notices a black cat crosses his path. Hatter takes aim at the cat with a very long handgun, only to have a bullwhip wrap around his neck as he is dragged off-panel.

The next page is a full panel of Kite-Man falling from the sky as Batman stands in silhouette on the roof about him, stating “hell yeah”.

Batman faces off against Hush, dodging bullets as he takes him down with a well placed batarang and knee to the head. At Wayne Manor, Thomas cares for the sick Gotham Girl before being interrupted by the Ventriloquist who passes on a message from Bane that Robin is to be killed and displayed publically.

As Batman removes the medallion from Hush’s neck, while Thomas kisses Gotham Girl on the forehead and puts his mask in place. Thomas then descends into the Batcave where Robin is being held captive and pulls out a handgun and the issue ends with Batman telling Catwoman that Thomas Wayne has a decision to meet as Thomas holds a gun trained on Robin.

Analysis: I think it is easy to tell that stuff that Tom King is interested in writing is the relationship between Batman and Catwoman, which is where this series really comes alive.  Action heavy issues like this one, on the other hand, feel very quick and give the impression that the creators are trying to cover a lot of ground. It’s a piece that is actually a little jarring after the slow romantic pace of the previous two issues. There are definitely moments to cheer for like Two-Face realizing that Batman has returned, but everything has a rushed and abbreviated feel to it. While the action in the story has some great moments to it, I think would have benefitted from leading an action beat or having more room to breathe than the quick shots of action that we get throughout the book.

The result is that not a lot really happens in this issue.  The story has the feeling of being all set up with very little payoff. I feel like the book is missing a bigger moment that I think would make the story feel bigger in scope.

The book also gives further insight into the relationship between Thomas Wayne and Gotham Girl, who appeared to have a much more caring relationship than one would previously think in the past few issues. I think this is an interesting pairing, and I hope that at some point the book explains more about how these two characters came to team up. I think it’s interesting to have Thomas Wayne find a surrogate daughter in the face of becoming bitter enemies with his son, even if it is in another timeline.

The book also seems to continue to hint that Robin is exactly where Batman wants him to be. I feel a big pay off is probably right around the corner.  Part of the fun of Batman is seeing him be the smartest person in the room and I think this run is overdue for infusing some of that attitude into how Batman operates.

Artist John Romita Jr. brings his usual flair for crime stories.   There is something about this issue that I think evokes a “Blade Runner” like atmosphere of noir and technopunk that I think really works in a Batman book and I think it’s a shame that we haven’t gotten more trips to Gotham out of Romita Jr.