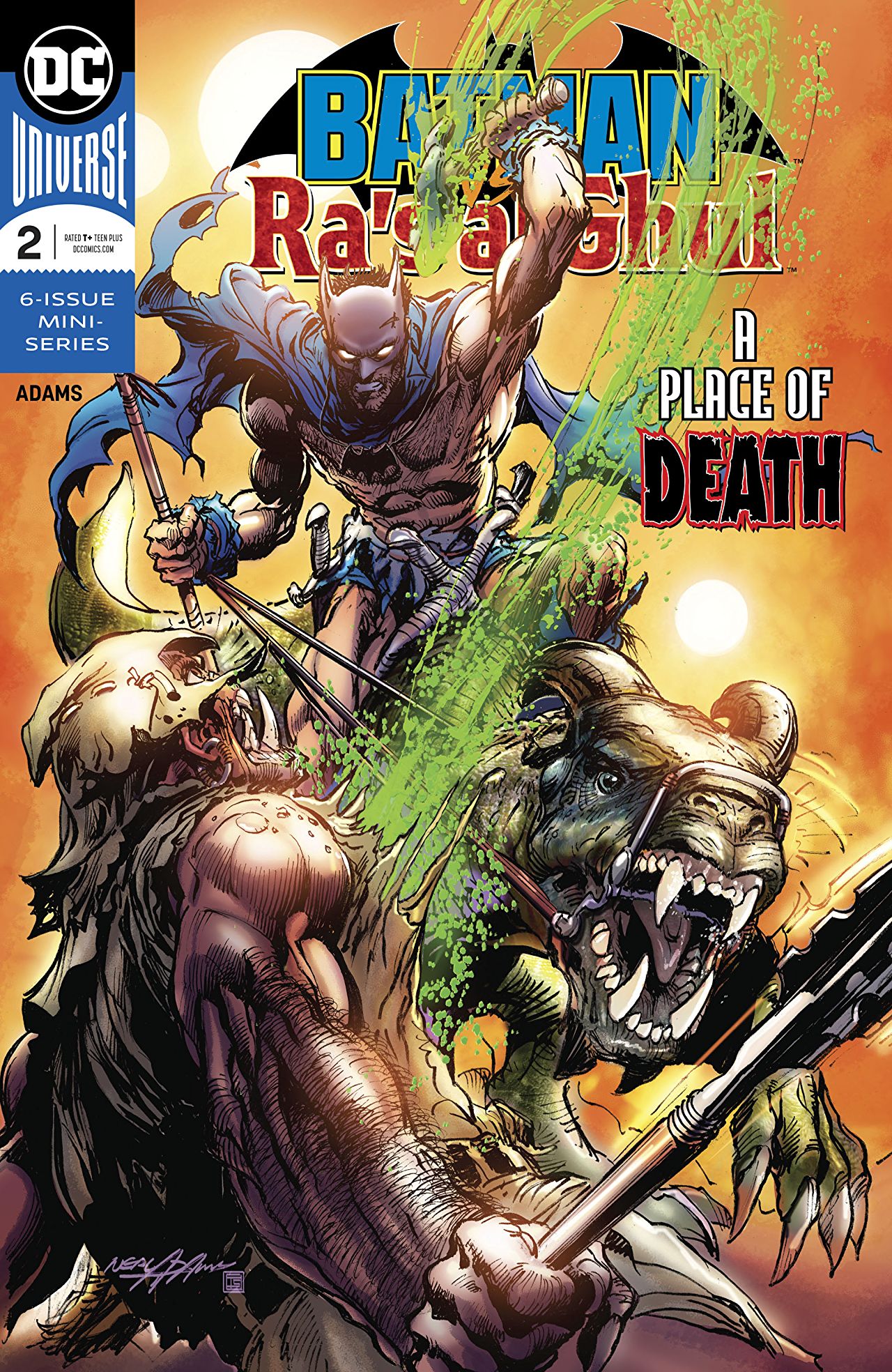 Overview: As Ra’s al Ghul furthers his plan, Tim Drake and Dick Grayson show Bruce and Damian Wayne who they really are.

Synopsis (spoilers ahead): Ra’s al Ghul stands in front of a statue of Batman, wondering aloud if the Caped Crusader is truly dead. He then summons Chiaroscuro, a figure hateful to him, but also a priceless tool for his needs. Al Ghul demands to see what she has done to Batman, and she shows Bruce, still alive and cowled, integrated into a machine, bound and helpless. We discover that Chiascuro will be taking Batman to a ‘place of testing’ to further prepare him for Ra’s’ plans.

Elsewhere Bruce, Damian, Tim, and Dick round the corner on their way to Wayne Manor, where they enjoy baloney sandwiches. Dick suggests that they take their lunch down to the Batcave. Bruce and Damian have no clue what he’s talking about, and when Tim and Dick try unsuccessfully to move the grandfather clock that reveals the entrance to the Batcave, Bruce and Damian get into a shouting match with them, saying that this gag has gone on long enough. When Tim and Dick insist that Bruce and Damian are, in fact, Batman and Robin, the latter decide the joke’s gone on way too far and it’s time to get to the business of working with Ra’s al Ghul to reform Gotham.

Tim and Dick, annoyed that everyone, including Alfred, has betrayed their mission, decide to leave and figure things out on their own. Before they can catch their Uber, however, the two are descended upon by Kirk and Francine Langstrom, both in their Man-Bat forms. The Langstroms pick up the boys and fly around Wayne Manor to a place in the rocks that they discovered years ago: the Batcave we are all familiar with. Tim and Dick ascend the stairs to find the entrance to Wayne Manor shuttered. They turn around to find Ubu, Ra’s al Ghul’s ever-loyal right-hand man. After a short tussle, Ubu is defeated and Tim and Dick pry open the boards blocking the Wayne Manor entrance. They summon Bruce, Damian, and Alfred to the clock and as Alfred passes a door left ajar, we see another Alfred bound and gagged inside a small closet.

Bruce, Damian, and Alfred are amazed at the Batcave that they never realized lay right on the other side of their walls.  They begin to argue again with Dick that they couldn’t possibly be Batman and Robin. Alfred begins to give a possible reason when he is clobbered over the head with a baseball bat by the other Alfred, who had managed to free himself and make his way to the others.

Despite the fact that ‘our’ Alfred took out a lookalike of himself (even yelling out the word ‘doppelganger’ as he did so),  no one (not EVEN Alfred) can explain how this Bruce and Damian Wayne could possibly have ‘forgotten’ that they are Batman and Robin. Dick suggests that Bruce take a little look around, take everything in. Perhaps that will jog his memory. Bruce encounters the now-human Kirk and Francine Langstrom, seemingly not curious as to why the disheveled pair happen to be wandering around the hidden part of his estate.

Ra’s al Ghul then makes his entrance into the Batcave and explains to Dick (who doesn’t understand why Ra’s knows about the cave and Batman’s identity) that he had long ago deduced Batman’s identity. An angry Kirk Langsstrom lashes out, however, calling al Ghul a liar and that he hadn’t deduced anything about Batman, but that he, Langstrom, had told him. Ra’s, angered at Langstrom’s impertinence, grasps and chokes Kirk. This attack backfires, however, and Kirk Langstrom’s body morphs into Man-Bat.

Analysis: This issue is much more straight-forward than the first, and so there is really very little to say. We follow the mystery of why the inhabitants of Wayne Manor seem to have no recollection of their double-lives, with no concrete reasons revealed.

The dialogue between all of the characters seems uniform. Switch any of these characters around and they seem exactly the same. The language, as well as the art, makes the book feel dated. Not that the art is necessarily bad. It’s absolutely Neal Adams. But the dialogue is really going to haunt me throughout this series.

There were TWO Alfreds. Everyone saw this. Why did it not occur to Alfred himself at the very least that Bruce and Damian might also be doppelgangers?

The interaction between Ra’s and Man-Bat, where Kirk calls al Ghul out on not actually deducing Batman’s identity, is a callback to Adams’ previous work, Batman: Odyssey. This series is possibly the next installment to what might be Adams’ bigger arc.

Final Thoughts: Towards the end of the issue, Ra’s al Ghul states that ‘There may be no “later” unless this train gets back on track.’ Yeah, that’s about right. I want to like a book titled ‘Batman vs Ra’s al Ghul’, but unfortunately I don’t know where this story is going, and it’s difficult for me at this point to care. But there are still four issues left, and that means there’s still room for growth.