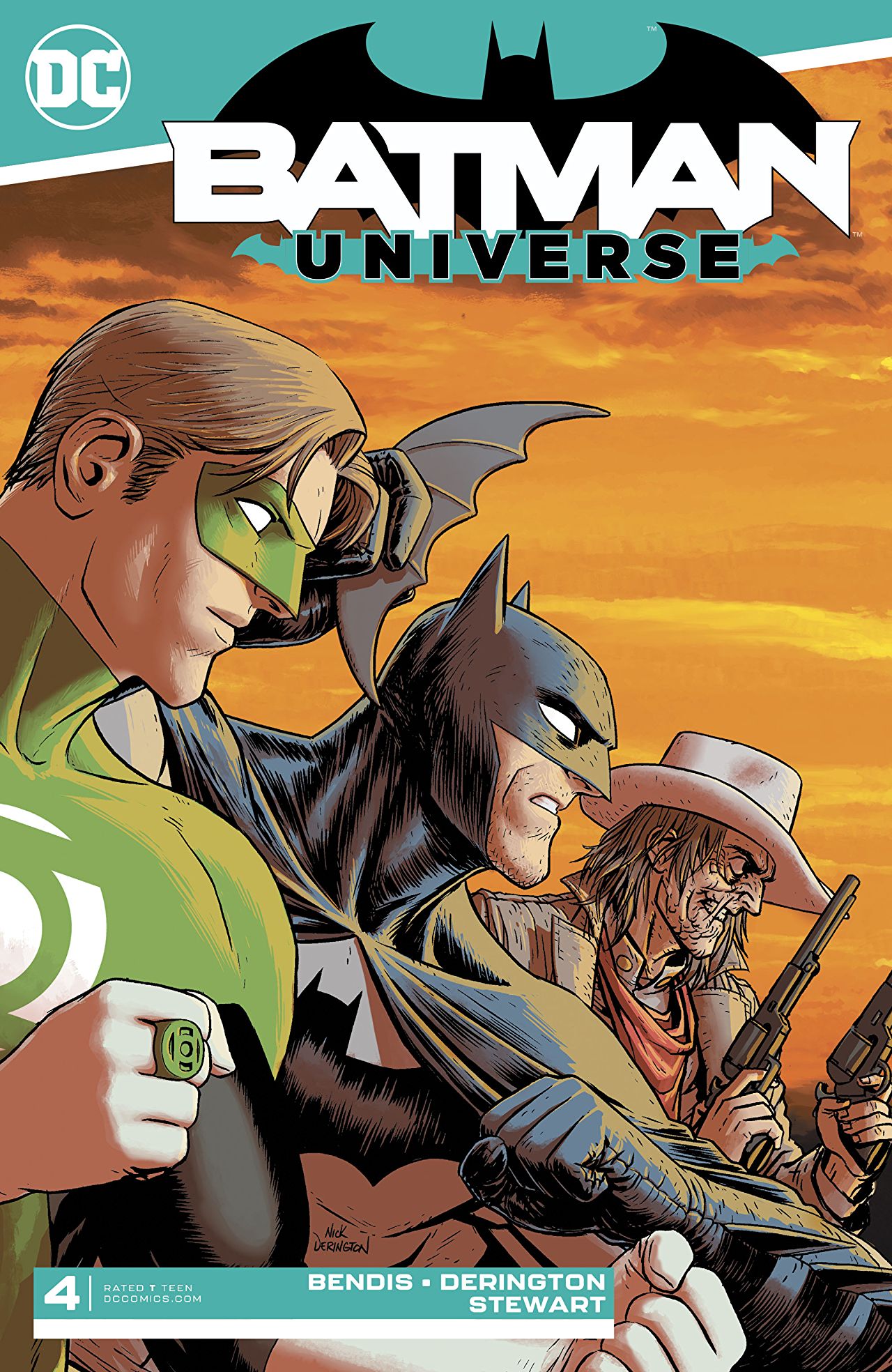 Overview: Batman and Green Lantern have followed the trail of Vandal Savage back to the Old West, right into an encounter with Jonah Hex!

Synopsis (spoilers ahead): The issue picks up with Green Lantern and Batman facing off against Jonah Hex and his gang, guns drawn. Batman talks Jonah Hex down, asking Jonah if he was familiar with the name Vandal Savage – Jonah responds, it’s not a name you forget. They go into town and get clothed in the style of the time, and when Jonah tells them they have to ride six days north, Hal Jordan uses the power of his ring to fly them there fast! It makes Jonah sick, but it’s worth the time saved to get to an old mining town, which Jonah tells them was the last place he saw Vandal Savage. Suddenly Green Lantern’s ring seems to ignite and he disappears!

Vandal Savage appears, with a gang of ninjas in tow. Batman calls for a truce, saying that the egg is dangerous and capable of creating unpredictable quantum events with catastrophic circumstances. But Vandal Savage doesn’t take the bait and orders the Black Order to kill Batman! Jonah’s response is to shoot first and ask questions later! But of course the bullets don’t kill Savage, and a wild fight breaks out between the Black Order and Jonah Hex and Batman. During the fight Batman asks Savage to let go of the egg, when suddenly it erupts with energy and floats into Batman’s hand!

The egg lights up and seems to take Batman out of the fabric of creation, before landing him back in Crime Alley. To Bruce’s relief, it seems to be the present-day Crime Alley, not the night where his parents were murdered. While Batman talks to Alfred on his comm-piece, telling him of his adventures in the Old West, suddenly Vandal Savage appears, saying he has been looking for him for one hundred and fifty years. He then shoots Bruce Wayne with an energy blast, and takes the egg, saying it’s been “a helluva chase.”

Analysis: The first thing that must be mentioned in this issue is the superb art by Nick Derrington, which is so on point and powerful that it succeeds in lifting up a fairly standard caper plot to an excellent comic issue. This isn’t to say Bendis is phoning this one in either – of all the comics of his I have read over the last ten years, this is amongst a handful of truly strong issues. When Bendis went to DC, a lot of readers such as myself, who liked his early to mid work at Marvel Comics, but felt he has been on the decline for the better part of a decade, undoubtedly hoped that the move to DC with a new universe of possibilities and new characters to explore would reinvigorate his storytelling. Based on this series which reprints the chapters originally collected in the Walmart giants, this hope does appear to have some substance. The writing tics that pervade the majority of his work are thankfully kept to a minimum here and instead his neat storytelling takes centre stage and he is content to let Derrington shine. For the first time in five years, I’m reading a Bendis comic where he does not appear well and truly burnt out. It’s exciting and reminds of what appealed to me in his writing back in the day, well-told takes with humor and heart that drew me back into the comic shop and kept me there.

In terms of the specifics of the issue what comes through is a sense of fun, an adventure through the DC Universe via the eyes of Batman. When we think of the young children or teenagers who might have picked this issue up in Walmart, curious, wanting to know about Batman and the DC Universe, I think it must be acknowledged this issue is a strong example of the strength of the DC pantheon. Recommended reading.

Final Thoughts: A good, solid Batman-centric comic book. A good advertisement for DC and the Batman universe of characters! This title goes from strength to strength.