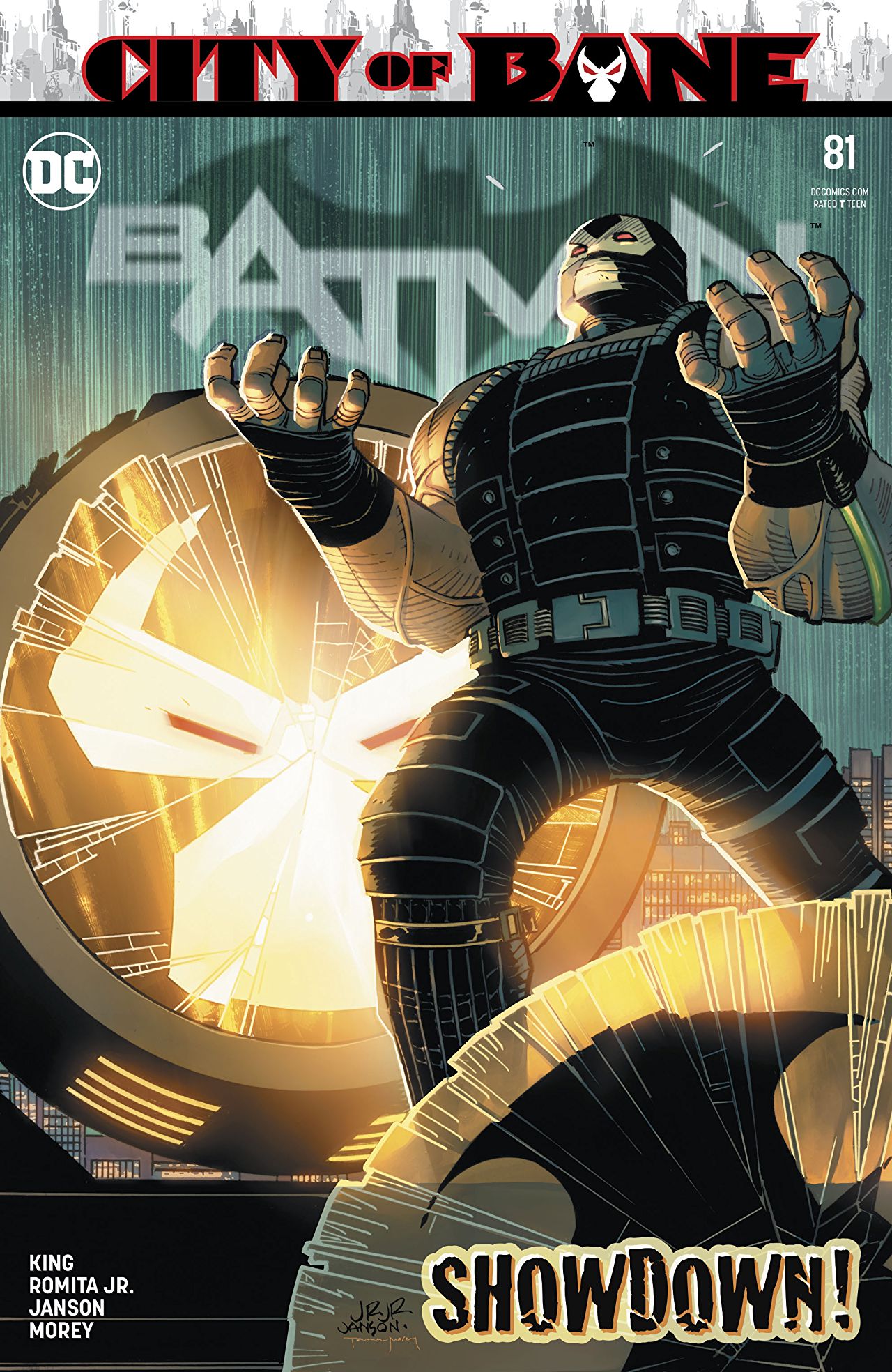 Overview: Batman’s plan to take back Gotham comes into focus.

Synopsis (spoilers ahead): The issue opens in the Batcave, with Thomas Wayne holding a gun to the head of a tied-up Damian Wayne.   Thomas says that he can’t shoot because they are family, as Damian breaks free and tells Thomas that they aren’t family and tells Thomas who his family really is, as Thomas finds himself surrounded by Batwoman, Orphan, Signal, Batgirl, Huntress, and Tim Drake’s Robin.

Meanwhile, Batman and Catwoman take on Amygdala and Solomon Grundy outside the gates of Arkham as in voiceover, Batman explains to Catwoman how after finding Arkham empty, he sent the Bat-Family a message with his punch to Tim Drake’s jaw, as seen in Batman #71, for the Bat-Family to go dark while he walked into Bane’s trap at Wayne Manor, knowing that he would be defeated by Bane so that he could then find a way to defeat Bane without being watched.

Back in the cave, the Bat-Family lay a beating on Thomas, apparently for what happened to Alfred while Batman and Catwoman walk through the halls of Arkham.  Batman’s voiceover continues, explaining that after he was defeated in the pit, he left Gotham to find a way to defeat Bane.  Batman continues that he had discovered that Gotham Girl’s powers are a result of a high powered form of venom which led him to the discovery of Bane’s involvement and how he destroyed most of this super-venom, except a final dose that was kept in the care of Batman’s old mentor, the Memory of the Mountain.

Over at the cave, Huntress stands over a broken and bloody Thomas pointing a crossbow at him, offering to put an arrow in his spine, as Tim states that it is not his way and they should offer him mercy.  Thomas pulls himself to his feet, speaking to himself about what is wrong with his boy for him to have an army of children fighting for him.  Huntress shoots an arrow, yelling “for Alfred”, which Thomas catches and plunges into Tim’s chest.

Back in Arkham, the Joker and Riddler walk into Arkham as Batman’s voiceover explains that he left a caretaker to watch over Gotham to make sure that the very worst did not happen as “the Joker” punches out the Riddler, revealing himself to be Clayface in disguise.

Underneath Wayne Manor, a serious of quick, close panels cut between the grandfather clock and down below, Thomas continues his assault on the Bat-Family.  Batman and Catwoman make their way through Arkham, with the captions explaining that when he made his way to the Memory of the Mountain, he found him murdered and the venom stolen, and then was injured by Magpie’s men. Selina found him and nursed him back to health. He realized that he doesn’t have to be alone and how his enemies would assume that he wouldn’t have asked the Bat-Family for help.  As the story cuts to a splash page of Bane, Batman’s voiceover explains that he reached out to the family and that Alfred had sent word that he had escaped, so he sent word to Damian to get captured and once he got inside the cave, he could let in the rest of the family and take back the Batcave while they take on Bane.

The grandfather clock splinters open as Thomas drags the beaten and bloody members of the Bat-Family behind him, ordering the Ventriloquist to bring him a tea.  Thomas explains to Wesker that he used the Bat-Family’s devices to send word to his son that their plan had worked.

In the epilogue, the previously captured, naked Harvey Bullock sings a song about Gotham City as he escapes into the rainy night.

Analysis: In a long-form story such as this, its inevitable that there has to be some time devoted to spelling out the hows and whys of the story, and Tom King does a decent job of giving out this information quickly and efficiently in a way that doesn’t slow down the overall momentum of the story.   I like the choice to pair what is essentially an information dump with the action-heavy face-off between the Bat-Family and Thomas Wayne.  I also appreciate that they didn’t’ save all of this information for some anticlimactic explanation that, with the story wrapping up in only four more issues, doesn’t really have time for.  I do find it a little contrived that the voiceover seems to be a conversation with Catwoman where he is telling her information that she should largely already know and I have to wonder if there was a better way to present it, such as through dialogue in a confrontation with Bane, for instance.

One of the things that this run has been built on is Batman taken to a new emotional low in order to learn, grow, and change as a character. I think that overall, it has been successful in doing that. I do find that having Batman as aware of Bane’s plan as he now seems to, feel a little like King is trying to have his cake and eat it too. I wonder about how much of this is a response to some of the criticisms of some of the more extreme choices that the story makes, like having Batman losing control and punching Tim Drake.  It’s a moment that looses all of its weight if it is just some sort of fake-out. While it explains an out of character moment, so does having the main character be at the end of his rope. Removing what should be a low point for Batman, takes away from Bruce turning things around.

As Tom King’s run on this title has largely been about Bane toying with Batman’s life and loved ones, I enjoyed a return to seeing Batman a few steps ahead of his adversaries.  With the revelations of how far back Batman had been aware of Bane’s involvement and his knowledge of Gotham Girl’s connection, I do have to wonder if it really lines up with the overall story of the book, which I think we won’t really know until the story wraps in a couple of issues. It does also make me wonder if Batman was aware of the source of Gotham Girl’s powers, it makes me wonder why she was admitted into Batman’s inner circle unless it was a question of keeping her close where he could keep an eye on her.

I’ve commented before that I think there is a lot of potential for Thomas Wayne’s Flashpoint version of Batman. I think that this issue highlights how dangerous of a threat he really is with Thomas manipulating Batman and his allies to get them in close before striking.  It would have been a letdown to have Thomas Wayne’s roll in this story finish with being taken down by Batman’s allies as I feel that both versions of Batman need to have one finally satisfying showdown before the story wraps up.  With a handful of exceptions, there haven’t been a lot of compelling new additions to Batman’s Rogues Gallery, I would argue since Bane showed up in the mid-90s and I hope that this storyline isn’t the last we see of this character.

The issue continues to dance around the final fate of Alfred.  The reaction of the Bat-Family seems to suggest that Alfred was indeed murdered, as does the reveal that Thomas Wayne sent signals that Alfred was safe to lure Batman’s allies to Wayne Manor.  King even takes the time to show what Clayface has been up to which I think is designed to take that possibility out of the table.  I still have my doubts that Alfred is indeed dead but I appreciate the uncertainty that King has sewn in this issue.

John Romita Jr. does his usual stylized and gritty work here that I think is perfect for a book like Batman. I’ve loved his take on Batman going back to Punisher/Batman in the ’90s and I’d love to see him do a more extended run on the character, or at the very least another graphic novel like The Dark Knight Returns: The Last Crusade.  Mitch Gerads also puts in his usual solid work in the epilogue.  I’m not sure what exactly the point of having naked Harvey Bullock singing a twisted “New York, New York” riff about Gotham was, but it was well executed.

Final Thoughts: I have issues with some of the revelations that have come with this issue, but the Thomas Wayne moments made for a solid issue.