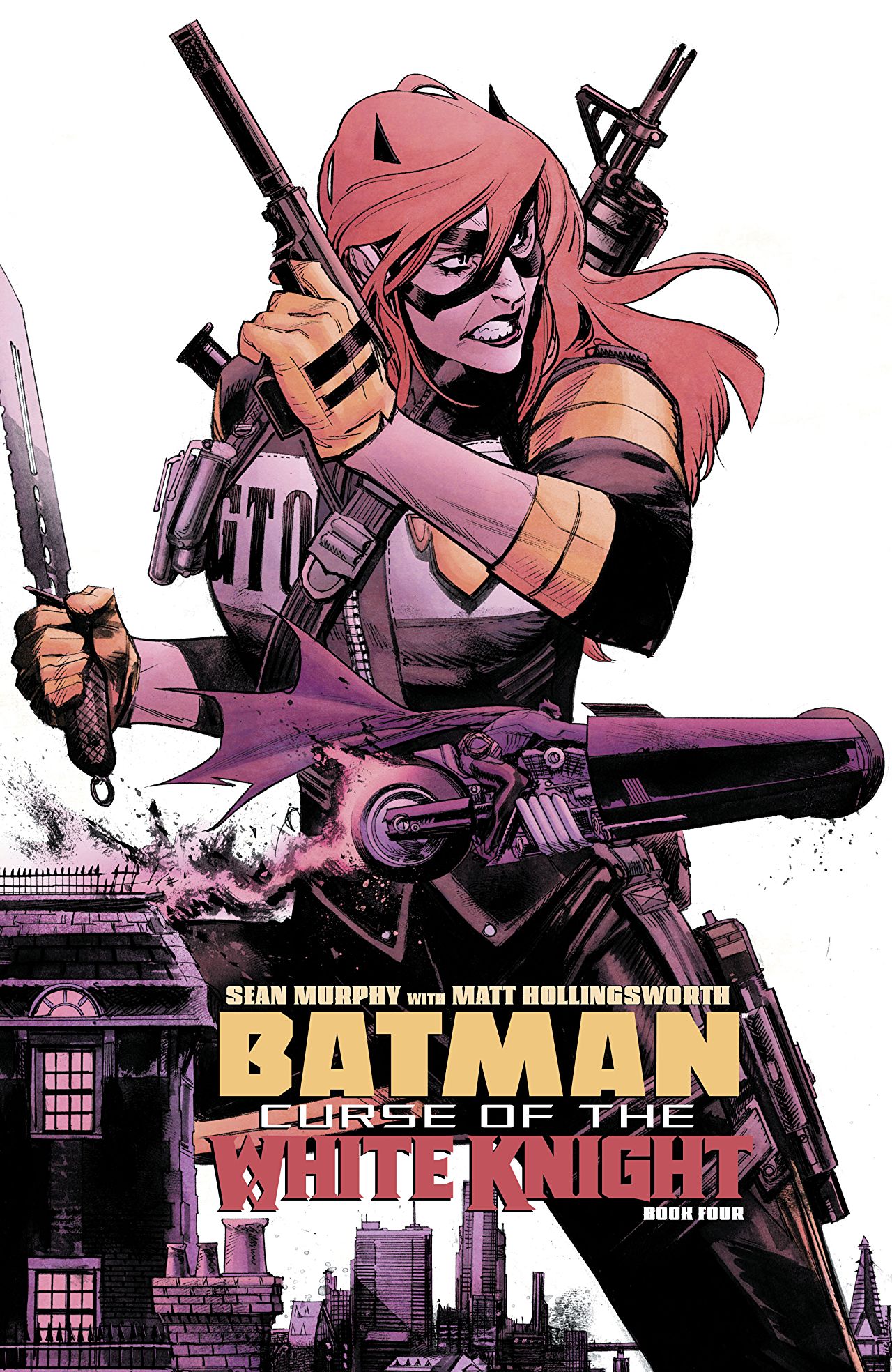 Overview: In the wake of Gordon’s death, Batman and Batgirl charge into battle with Azrael.

Synopsis (spoilers ahead): As medics rush Gordon to the hospital after being stabbed and hurled off a building by Azrael, we see a much younger Gordon with Barbara as a child in flashbacks. Barbara seeks advice from her father about a conflict at school with a bully, and he tells her to follow her own rules in fights – pushing back to win. In the hospital, Barbara passes Batman, who turns to follow her. They find Gordon, dead, and Batman crumples over the body of his dear friend and ally.

At the GTO, Barbara berates Montoya, Bullock, and Duke for letting her father die, then rounds on Batman and Dick. They let her go, as Montoya tries to salvage the situation and determine their foe’s identity.

Batman vanishes, heading to Leslie’s clinic where Harley and her twins rest. He tells Leslie of his plans to unmask before the whole city, and then collapses again when he tells her of Gordon’s death.

Barbara plans her attack, as Dick tries to get her to calm down and connect with himself and Bruce. He fails, as Barbara finds Azrael’s vehicle and heads off to enact vengeance.

Bruce takes Leslie to one of his Bat-Safe-Houses, and she tells him how she and Alfred obtained Edmond Wayne’s journal – from a mysterious vanishing group claiming to represent Bakkar’s descendent in the Order of St. Dumas, and giving it to Alfred so that Bruce can prevent the Joker from restarting the battle between Bakkars and Waynes. Alfred couldn’t decipher the clues, and Batman finds himself stumped as well.

Barbara takes heavy weaponry and the Bat Tumbler, joined by Bullock who is fully on board with her plan of revenge. Dick calls Batman letting him know of Barbara’s plan, and Batman yanks his bike in pursuit of his allies.

Jean Paul’s allies tell him to take his cancer pills, to allow him to fight to the end, instead of dying to disease. His team expresses loyalty to him, but not to his or Ruth’s mission against the Batman – just as Barbara slams into their military vehicle from the side, pushing both vehicles off a cliff. She prepares to unload her machine gun into Azrael, but Batman arrives and yanks the gun away. In response, Azrael appears to break Barbara’s back over his knee. Batman attacks, but Azrael knocks him out with the flat of his sword. Azrael’s team departs, and Dick arrives to find Batman carrying a broken Barbara away from the flames.

Analysis: After a frustratingly clumsily written last issue, this installment steps up the plotting and character connections, though a few elements still hold it back from satisfaction. Murphy chooses to make Batman directly responsible for leaving Barbara vulnerable to Azrael’s spine-snapping attack by taking her gun – lending more weight to the eternally frustrating question of whether Batman should make the choice to not kill for everyone, instead of just for himself. The series of defeats suffered by Batman and his family in these two issues also destroys a lot of the potential for enjoyment, particularly since Gordon’s death and Barbara’s injury seem to have no real purpose outside of a feud without full understanding. Perhaps in light of future revelations the battle between the Waynes and St. Dumas’s Order will seem more worthwhile, but for now, the Gordon family lies in burning wreckage for no solid cause.

Unlike the last issue, where Gordon’s death was undercut by the serious lack of consistent development of Jim’s character, Barbara has serious elements that make her quest and injury more powerful – her relationship with her father in the flashback, though perhaps a bit manipulative, seems sincerely written and effective. Murphy even adds a manga-esque heart between father and daughter when Jim kisses Barbara as a child. As usual, though the writing and structuring of Murphy’s stories are generally fairly middling at best, his art, beautifully brought to colored life by Matt Hollingsworth, powerfully conveys the emotions the words don’t quite evoke.

Unfortunately for those who wish to see if Murphy has killed Barbara, or whether he’s decided to try to incorporate a version of Oracle into his universe, next month we have the release of Von Freeze, a one-shot set in the 1930s and 40s of this universe, drawn by legendary inker and artist Klaus Janson. We’ll be covering that issue right here!

Unlike the last issue, where Gordon’s cover was featured only as the variant, Batgirl’s cover features as the main cover this time, and it accurately reflects the interior story with Barbara’s extremely heavily armed figure dominating the cover, while Batman on his futuristic Bat-bike races off a roof. Unlike some covers by interior artists, this cover also functions beautifully as a single, non-sequential image, with careful composition, colors, and framing. The color spectrum used also presents a lot of interest, limiting the palette to the warmer end of the spectrum – reds, yellows, purples – but no really vivid hues, instead presenting more muted or mixed tones, underlining the darker and hotter emotional spectrum of the interior narrative. The variant cover, this time, focuses on Alfred, a character who died in the last series, but features heavily in the flashback section of this issue.

Final Thoughts: Tragedy follows upon tragedy as Azrael continues to prevail in his struggle for the soul of Gotham.