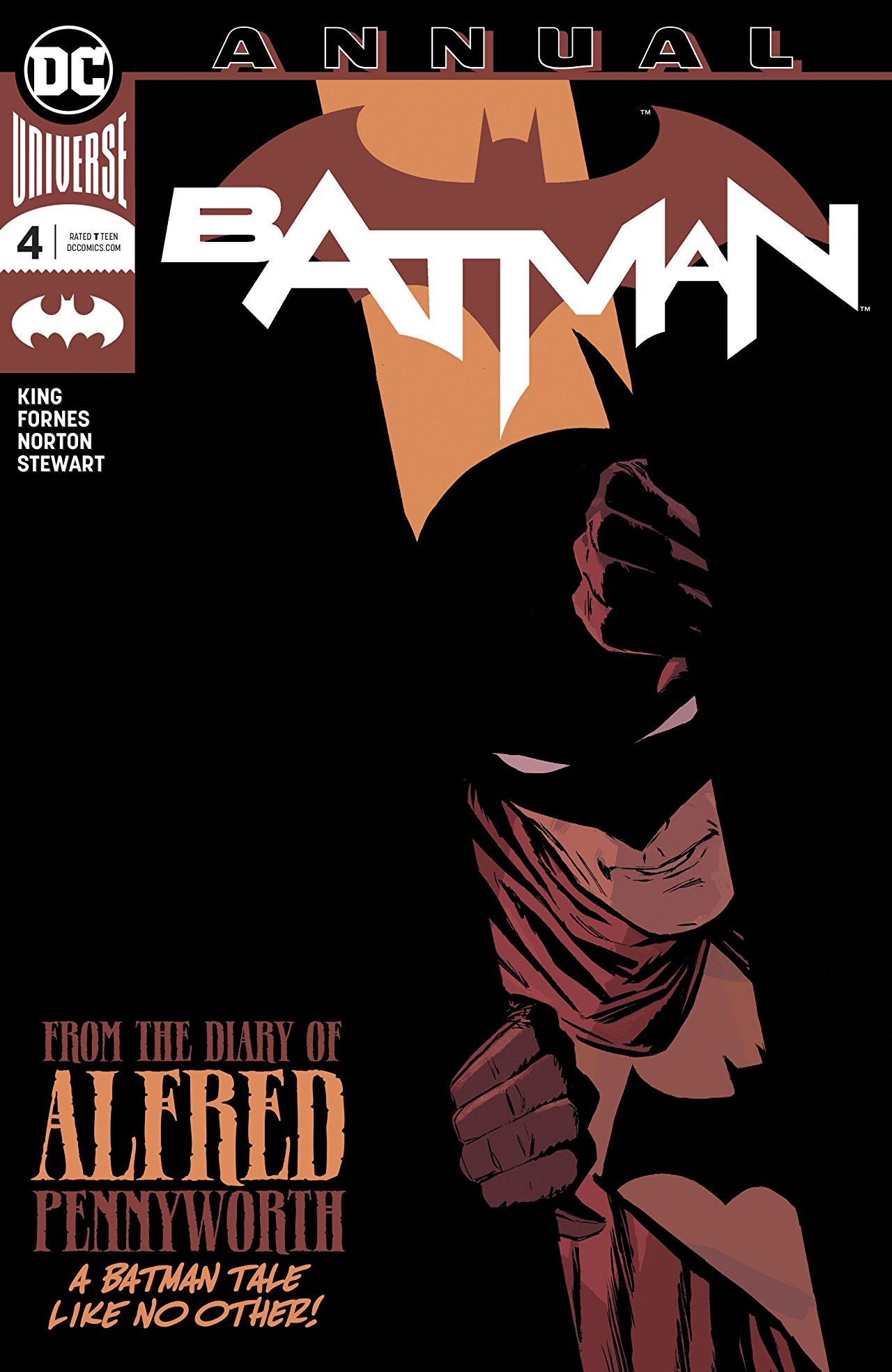 Synopsis (spoilers ahead): The story is narrated by Alfred in journal entries and opens with a page of Batman chasing a criminal, both on horseback, over the rooftops of Gotham. Batman manages to tackle the criminal off his steed and throws a couple of Bat-ropes to stop the runaway horses from running over the edge of the building.

The next night, Batman accepts the challenge of a mixed martial arts champion to a charity match. As the two square off in the octagon, Alfred’s narration explains that Batman had ignored the fighter’s challenges until he began bragging about being untouchable following beating a domestic violence charge, as Batman knocks the fighter out cold in the ring.

The next night Batman stands in a study over a murdered billionaire and proceeds to interrogate several suspects. After going over their stories in the quiet of the Batcave, watches as the billionaire’s son is taken into custody after Batman determined that his story was a lie.

The next night, Bruce Wayne meets with a high school girlfriend for a drink, and Alfred explains that she was his first kiss before he left to travel the world to become Batman. She comforted him as he confessed to her his plans to travel. The woman is then comforted by Bruce as she confesses to having just committed a murder.

The next night, Batman lays on train tracks as a train where a buyer is supposed to meet a man selling missile defense codes speeds towards him. Batman hitches a ride and boards the train and proceeds to intercept the deal.

The next night, Batman finds himself on an extradimensional plane where a powerful being askes Batman why he and the human race, should exist. Batman answers that the being’s threats will fail because while the being is judgment, power and glory, he’s Batman. Batman then finds himself transported back to the Batcave.

The days continue to unfold with Batman’s adventures in single panels which including facing off with zombies, monsters, sharks, death machines, supercharged cars, mass murderers, Joker toxins, alligators, vampires, helping a wandering elderly woman cross the street, goes to space, and faces off against the Joker as the issue ends with the issue’s title: Every Day.

Analysis: I had the good fortune to get to speak to Frank Miller a few years ago at a convention and I asked him if he had said all he had to say about Batman. Miller responded that he didn’t think that he would ever run out of things to say because of how malleable Batman is as a character. Tie him in knots, throw him up against a wall, and Batman still won’t break. I think that is what has led to Batman enduring as a fictional character. Everyone seems to have their own take on the character, from a gritty, hard-boiled vigilante who operates in the real world, to a superhero who is always off on some cosmic adventure. These different takes are all perfectly valid because if you look at the source material as a guidepost for “the real Batman”, at different times, Batman has been all these things.

That seems to be the mission statement for the latest annual from Tom King. All of these different versions of Batman are still Batman. It reminds me of the overall take that Grant Morrison took when he was writing Batman ten years ago where he incorporated the Golden Age pulp and Silver Age silliness of past Batman stories into continuity. Where Morrison explained the crazy sci-fi stories of the ’50s as Batman’s sensory deprivation experiments and exposure to Joker and Scarecrow’s toxins, King takes the route of not explaining the craziness at all.   One day, Batman fought a dragon. No need to explain it, especially in the space of a single issue.   I like how King just trusts his readers to just go along for the ride.

The annual is a stand-alone story and offers no direct connection to the long-form story that King has been telling at least not plot-wise. Through the use of Alfred as the narrator, King takes the various vignettes to touch on various aspects of Batman as a character, from the superhero, the detective, adventurer, etc. In using Alfred as the narrator, Batman’s eternal father figure has an opportunity to explore bits and pieces of Batman’s psyche through the eyes of the person who knows him best. The most direct call back to the themes that King has been exploring is the segment where Bruce takes a moment to, not only bring a murderer to justice but to return a moment of kindness he was once shown with a piece of his past before he became Batman. I like how King makes the distinction of this woman being Bruce’s first and only love because once he traveled the world and started his mission, he had become a different person.   While I think this sequence works well and is a worthy companion to the Bat/Cat stuff in the main title, I think the moment in the story I like the best is Alfred explaining his theory on how Batman feels fear as the panels show him. It’s death as a train speeds over him. King’s take on Batman is a flawed and very human take on the character. I think that in using Alfred as the narrator, King is able to inject this take into the story in an efficient manner that works with the format of this story.

The book also manages to fit in a few Easter eggs from Batman lore, such as King incorporating an “I’m Batman” into the story Mad Love, a reference to “Identity Crisis”, and a panel from “Mad Love” in the final page of the story.

The art is effective and suits the story well, with Jorge Fornes handling the lion share of the art while Mike Norton draws the more montage-y one panel sequences. The two artists’ styles are very complimentary that avoids the jarring effect that switching the artist mid-issue often brings. There was a Year One quality to the art that I think was well suited to the journal entry format of this book.

Final Thoughts: This book is a love letter to all things Batman and I had a lot of fun reading it. Also, Batman rides a dinosaur and that’s awesome.