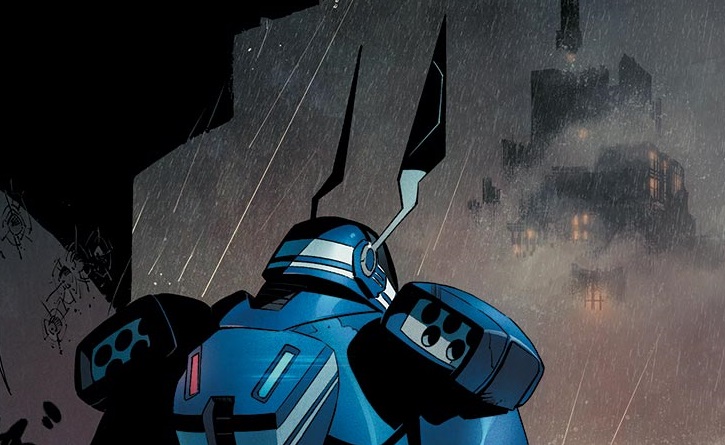 While the full list of solicitations are not expected until next week, DC has released some solicits for certain titles including the upcoming issue, Batman #41 by Snyder and Capullo.  We already knew that Snyder had promised big changes and a completely new status-quo for the Batman ongoing title but also for the character as well, and this solicitation seems to be proving that prediction to be correct.

“The all-new Batman makes his debut! Who is he, and what happens next? Find out here as a new era begins in Gotham City!” While this doesn’t give away many details, the “all-new Batman” seems to be taking a very different direction that what we’ve seen before just as Snyder promised.  The solicited cover image shows what appears to be a highly mechanized/weaponized Batman (or even potentially a robotic Batman) the likes of which Azrael’s Batman does not even match.

In an interview that Snyder gave Newsarama before this news broke, he discussed more about his desire to do something never-before-tried in the Batman universe.  When asked about the possibility of a new status-quo, Snyder commented:

Well, it’s true that you’ve never seen it. It’s definitely the wackiest thing we’ve every tried. It’s basically the story where I thought, “If I ever do a story out of continuity, I’d love to do this. But there’s no way I can change the mythology to a degree that I could get to this story.” But…here we are. And the thing I love is that it will allow me to explore the characters from angles that are entirely new. There are two characters the story really focuses on, and they’re both in positions where radical, radical changes affect their status quo. And this will allow me to explore the Bat-world in really, really vibrant perspectives.

I’m going into, I guess, my sixth year in Gotham, and things have been so much fun, especially in the last year with [Editor] Mark [Doyle]. And DC is now so progressive with their line and the changes in June that I really feel that right now, it’s the time for us to try something pretty unconventional and risky with the book, because otherwise, we just fall back on playing it safe. This is us saying, “We’re just getting started, and it’s Batman #1.” I promise you, if you get to the end of our 8-page Free Comic Book Day thing and if you don’t think it’s the craziest thing we’ve ever tried…well, I can’t give you your money back because it’s free, but I promise it is unequivocally the craziest thing we’ve ever tried. Period. It just is.

When pressed about whether Bruce Wayne will continue on as Batman or if this new status-quo involved a entirely new character in the suit (and the new suit does seem to lend itself to speculation that this may be true), Snyder answered:

I don’t want to say. [Laughs] I don’t want to say! I know this is a new level of coy, but I will say that the mythology will be radically reinterpreted and stretched in a different way. [2014’s] “Endgame” was designed to be my last story on Batman, but if I stayed after “Endgame,” it needed to be transformative, where everything was put aside and reinvented. It’s going to be a new cast. I can say we’re going to bring in characters you haven’t seen in Batman before. We’re also going to play a lot with a lot of the other books—characters from We Are Robin and Batgirl are in the book. You’re going to see Harper and Cullen, characters we’ve created. And there will be a really different feel to it. We actually toyed with the idea of just calling it “All-New Batman”for a while, because it is that different. I can also tell you it’s going to be all-new villains. I want to go back to the spirit we had when we were creating Court of Owls, where there’s new villains, new threats, new cast. So, even though Snyder wasn’t giving details or responding to the release of the solicitation for Batman #41, it seems that Snyder will deliver on his promises to completely change the world of Batman.  And other books are following suit.  While we still have to wait for the full solicitations, among the early releases was Batigrl #41 which also mentions a “new Batman:”

There’s a new Batman in town…and that spells bad news for Barbara Gordon! She’s already got enough upheaval in her life, with her roommate Frankie in on her biggest secret…and now she’s looking to get even more involved in Batgirl’s business!

However, even with the changes coming to the character of Batman, DC has other changes planned that will affect the Batman universe as well.  TBU had already reported that June would bring the end of the New 52 imprint and introduce two dozen new books to DC’s main list of monthly ongoings, but in an interview given to Comic Vine, DC Co-Publishers Jim Lee and Dan DiDio discussed the coming changes in more depth including the revelation that these ongoing titles will no longer all be in the same continuity.  While discussing how this “mini-relaunch” (as some have called it) would be different from the 2011 launch of the New 52, Lee commented:

It’s a big launch. I think it differs from what we did four years ago in the New 52. We are sort of updating the line, but selectively. Rather than having 52 books all in the same continuity and really focusing on keeping a universe that is tightly connected and has super-internal consistency and really like one flavor, we’ve really kind of broken it up. We’ll have a core line of twenty-five books that will have that internal consistency that will consist of our best-selling books. The rest of the line of about twenty-four titles will be allowed to really shake things up a little bit. We’re really asking the creators to put stories and characters first and really focus on canon than continuity.

Continuity is where this characters was today and this is where the character was tomorrow. Those are things that sometimes the readership gets too wound up or too concerned about. It starts overshadowing what we’re in the business of doing, which is telling stories. By focusing on canon, which is really the stories that matter, the best stories we tell with these characters, they’ll get elevated. That’s the history we want to create with these characters. It was really weird when we launched the New 52. There were so many fans focused on “Well, what happened between the five years when this character showed up and this character…” it almost overshadowed what the original intent of it was, which was basically put a fresh face on the universe, boldly go forward and tell new stories.

This is an attempt to refocus the line, focus on story, focus on producing great stories that become canon, and let the creators have some freedom to tell those stories without having to necessary be confined by the “resurgence of continuity.” That’s my perspective on it.

DiDio went on to explain that he liked the days when stories like The Dark Knight Returns were possible and when writing stories that could be classified as “elseworlds” stories was possible. While we can’t be sure just yet which titles will fit into the label  of that “core line of twenty-five books” Didio said that the idea behind this move would be a return to that notion of creative stories taking precedence over establishing coherent continuities.  To this point, DiDio said:

The goal for everything we’re doing right now is we still have a shared universe, we still have a shared space where these characters can interact. The main goal is to allow each of these characters to really exist on their own, build their own sense of story, direction, supporting cast, and audience. Once you do that, you have a much stronger foundation for the DC Universe. Ultimately what happens, as you see what works, you can start to bring ideas and concepts together to actually expand the audience and cross-pollinate.

If you look back at DC’s history or even comic’s history, most of the characters that exist today, traveling in a group, that wasn’t the case when they were introduced. Every character existed and breathed in his own right. When they crossed over, it was special. What we want to do is make those individual things special again. But we also recognize there’s changes and there’s new readers coming in. One you get a new fan, you want to hold onto them. This is different. There is no overarching brand on it. This is the DC Comics, pure and simple. Because it’s DC Comics, we have to literally go out and sell every single title individually. Which is what we want. Every one of these books is it’s own entity.

The two went on to comment that there would be a new status-quo for Batman, Superman, and the Justice League which would be only reflected in the books that directly relate to that character or team and the creative teams on the lead title for each of these characters were instructed to write as if their upcoming issues were a “new #1.”  It seems that for Batman, at least, Snyder and Capullo have followed these instructions to the letter.

Stay up to date with TBU for more upcoming news about the changes coming after Convergence including the entire list of solicitations for June which should be released next week.  Also, let us know what you think about the “all-new Batman” including thoughts about the design and who might be in the suit, assuming it is a suit.