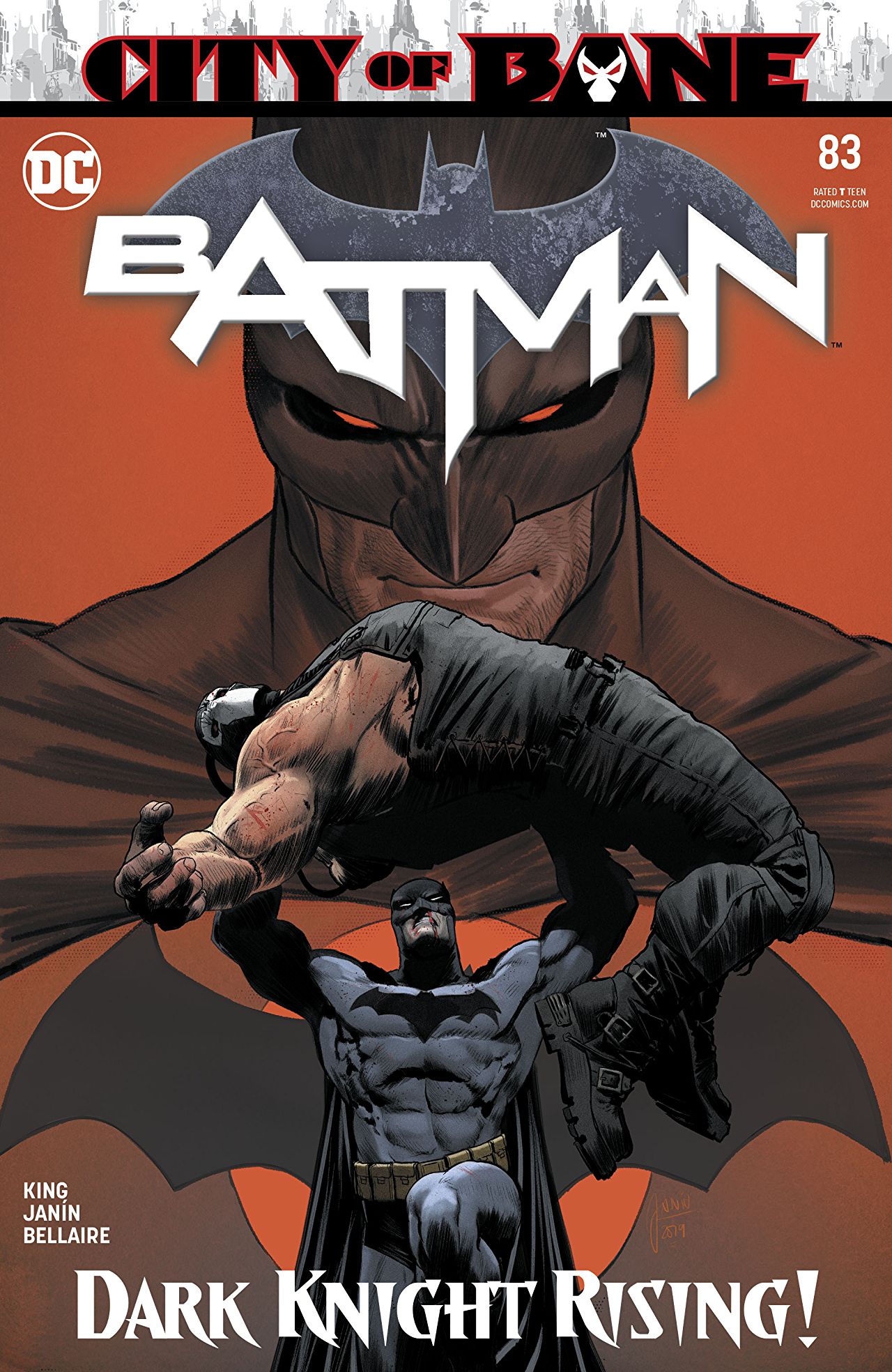 Overview: Batman confronts a tragedy as the story nears its conclusion.

As the recording goes on to speak about watching as Bruce took his vow after the death of his parents, Batman looks up from Alfred’s body to words spray-painted across the wall and a painting of a young Bruce with Alfred: “You are not Batman”. As the voice-over speaks about Batman turning his pain in to hope, Batman tries to exit the room, only to find the doorway walled up, and Batman begins to punch and kick at the wall, with Alfred’s voiceover speaking about standing by him in his mission in the hopes of seeing Bruce smile again.

As Batman screams in rage and grief, he begins to destroy the room around him, Alfred’s voice speaks of finally seeing him smile again, as he waited for Selina on the day they were to be married. As Batman kneels on the floor, Alfred’s voice explains that he had made the decision to lie to Batman that he was safe, knowing that it would result in his death and telling Bruce that the day will come when he will smile again. As Alfred recites another poem and tells Bruce goodbye, Batman stands in front of the portrait of Bruce and Alfred and removes his cowl, wiping tears away from his eyes.

The bricks in front of the doorway explode and Batman turns to find Catwoman in the doorway, with Selina telling Bruce “he says your ready”.

Bruce follows Selina down a hallway, silently past the members of the Bat-Family as he puts his cowl back in place, to find Thomas in the study, in civilian clothing, smoking a pipe as Psycho-Pirate and Ventriloquist stand behind him. Thomas asks Bruce if after the death of Alfred, and after Thomas has taken control of his city, his family, and his woman if that is enough. If Bruce is finally done.   Batman takes a moment and responds that he will never be done. That Thomas will never stop, and never will he, and the issue closes with Thomas and Bruce squaring off, with Bruce ending with the words “for Alfred”.

Analysis: Since Batman # 77’s cliff-hanger ending of Bane snapping Alfred’s neck as Damian Wayne looked on in horror, the question has remained as to whether or not Alfred is indeed dead. As Tom King continued the story, seeds were dropped here and there. Possible outs, like Alfred being revealed to be Clayface, were removed and the seemingly reckless act by Damian that led to Alfred’s apparent death was explained as being part of Batman’s larger plan.   Now, in Batman #83 we appear to have an answer and it appears that Alfred is indeed dead.

I personally have had my doubts about Alfred actually being dead.   Alfred continues to be an important part of the larger Batman mythos. Andy Serkis has just been cast as the next live-action version for the next series of movies. Also, let’s remember that there are still a couple of issues left, and this is comics, where death is rarely permanent. For all we know, the next arc will be an eleven-month, multi-title crossover called “The Search for Alfred”. It’s also just plain hard to think of Alfred being no more in the ongoing adventures of Batman.

That all being said, after seeing it presented here, I hope that the story sticks to its guns and holds to the notion that Alfred is dead, at least for the purposes of this story. Tom King has stated, over and over again, that his definition of Batman and his mission is a flawed, deeply emotionally scarred person who has taken the horrors that the world has thrown at him, and turned that pain into hope. I think that more than anything else, that is what we are seeing distilled into a single issue.   Batman wakes up to find the man who raised him lying dead before him. Over the course of twenty pages, Tom King moves Batman through the grief and rage of discovering Alfred’s body, to a moment where Batman, on the floor of the destroyed dining room, stands, not looking at the “You are not Batman” that has been sprayed on the wall, but to the painting of Bruce with his surrogate father.   It’s in that moment, that I think we see Batman doing what Batman does; taking his pain, and turning it into hope.

It’s unclear whether Batman is really hearing Alfred speaking to him over the course of the issue. I feel like the story works better if it is indeed a recording that is being played by Thomas to drive home to his son the cost of being Batman and it serves as another grave miscalculation on the part of Thomas, in thinking that it would be the final argument in his goal of having Bruce give up his life as Batman, and it makes sense that he would let the man who raised his son in his absence say goodbye.

As for the voiceover itself, I think it is a fitting goodbye letter for the character. I like how King keeps the exposition to a minimum, focusing instead on Alfred’s larger relationship with Bruce, and giving context for what would motivate Alfred to not only being a willing participant in Batman’s war on crime, but to sacrificing himself so that Bruce would not be beaten, taking ownership of his own fate instead of being a hostage.   The message being bookended by poetry, the first about fatherhood, and closing one about death, feel both thematically on point and very fitting for Alfred as a character.   Alfred has always been a selfless character, so a buy that he would willingly choose an action for Bruce’s benefit that could and has lead to his downfall.

The issue is otherwise light on plot.   The presence of Psycho-Pirate and Batman’s friends and allies standing around seems to suggest that they are under the Pirate’s influence, and the end of the issue suggests that not only can we expect the big final throwdown between Bruce and Thomas, but also finally an explanation as to how exactly it is that Thomas has escaped the doomed “Flashpoint” universe.

The art by Mikel Janin is beautiful. There is a somber tone of the story that I think is given more weight with Janin’s more realistic character work, and it is well suited for the story that they are telling here.

Final Thoughts: In Grant Morrison’s X-Men run, without giving anything away, a major character is killed, only to be retconned as having been an impostor by other writers in other stories with that character being alive and well, because, well… they were making movies, they weren’t going to kill that character off. But if you go back and read Morrison’s work as its own story, the original intention is still there in the story. I can’t help but wonder if something similar is going to happen here.   And at the end of the day, does it even really matter if Alfred is brought back in some other story if it serves this particular story at this time?   This issue is poignant, bittersweet, and frankly, is a beautiful goodbye to a long-standing member of Batman’s world in an issue that ties together the themes that the writer has been playing with for over eighty issues, and if you are going to kill a major character, this is how you let them say goodbye.