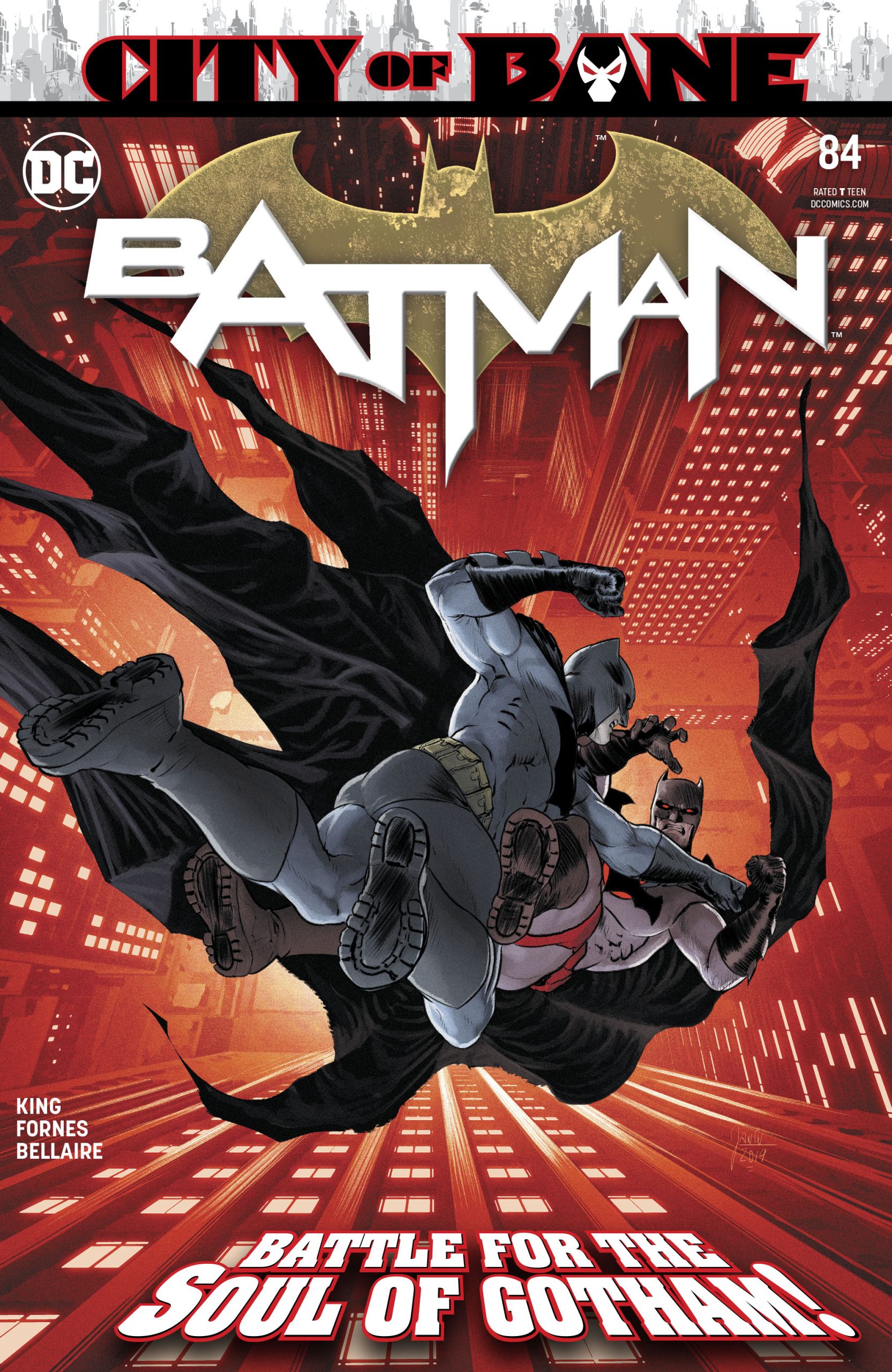 Overview: In the penultimate issue of the City of Bane arc, Thomas Wayne’s roll in the story comes into focus.

Synopsis (spoilers ahead): The story opens in the study of Wayne Manor, with Thomas Wayne and Batman facing off, with Thomas getting in the first punch. The story then flashes back to the end of Batman #74 with Thomas Wayne crawling out of the Nain pit, reciting to himself a vow to war against anything that would cause his son harm.   The story then flashes back further to Thomas standing before Bane’s thrown of skulls, offering to help. When Bane questions Thomas, he explains to Bane that he knows what is best for his son.

The story then flashes further back to Batman #49, where Thomas stands over the wounded Joker at the church, asking where he had heard that his son was getting married. The story then shows a series of flashbacks as Thomas watches from the shadows as Selina steals her wedding dress, Batman and Catwoman go on a double date with Superman and Lois, and stands in the rain as he watches his son propose to Catwoman.

The story then flashes back earlier, with Thomas waking up on a rooftop to the Reverse-Flash standing over him, telling him that as revenge for killing him in the Flashpoint universe, he has brought him to a world where his son became Batman. The story then flashes further back to the events of “The Button” storyline, where Thomas gives his son advice to be a father to his son and give up being Batman and runs off into the light as his world collapses. The story then flashes back further, to a wounded Thomas laying on the ground at the end of “Flashpoint”, speaking about how he cannot live knowing that his son becomes Batman as the Reverse-Flash lays dead beside him. The world goes white and then Thomas finds that he is still alive and nothing has changed, quietly saying “no” to himself.

The story then flashes back to Thomas drinking in his dead son’s bedroom, addressing Bruce as he talks to himself about how his mother killed herself after learning how in another world Bruce became Batman and goes on to explain that he intends to end the world.

Back in the present, after getting in the first punch, which sends Batman to his knees, Thomas tells his son that Alfred is dead and Bane is in a coma and to take off his mask, marry Selina and find some peace, with the issue ending as he tells his son to stay down.

Analysis: In this issue, writer Tom King answers some of the big questions that have lingered over the back half of his storyline since about issue #50, telling the backstory of the true villain of this storyline, Thomas Wayne.

Where I think this issue succeeds, is in shedding further light as to how it is that Bruce Wayne’s own father came to team up with Bane and play an active roll in Batman’s destruction.   I think it’s important to remember that the Flashpoint Universe is not exactly a parallel universe. The Flashpoint miniseries makes it clear that it is the regular DC Universe that was changed by the actions of Barry Allen going back in time to save his mother. Prior to that act, the characters and events are exactly as we know them. So this version of Thomas Wayne is essentially the same man that raised Bruce until the Flashpoint timeline caused Thomas to deviate down a path of events that would leave him a rage-filled, brutal, vigilante. So if this is Thomas was at one point was the same the good man who raised Bruce, how could he be willing to put his son through so much grief and agony in this story?

The first thing that I think is made clear is that from the repeated vow that Thomas bookends the story with, is that Thomas has declared war on Batman, or at least Bruce’s choice to be Batman, and that his actions in this story are motivated by a desire to correct what he sees as a mistake. As he tells Bane, Thomas knows what is “best” for his son. I like how the meeting between the two of them in “The Button” was heartfelt and not a part of Bane’s scheme. It preserves one of the more heartfelt moments of that storyline. Thomas wasn’t part of the conspiracy yet, and his advice to Bruce about not being Batman anymore was a genuine moment where Thomas thought he was in his final moments.   I don’t think it’s a stretch to imagine the horror that Thomas would then feel to next find himself in the main DC reality, in a world where Bruce was Batman and continuing to be Batman despite his advice, which leads him to Bane.

Thomas ending up in this reality by way of the Reverse Flash’s revenge makes sense for this character and feels like a logical extension of the Flashpoint story and ties “The Button” into the overall storyline of this run in a meaningful way, which is good considering that “the Button” didn’t really tie into “Doomsday Clock” in any real way other than as a marketing tool.

The rest of the issue goes into Thomas’ life as Batman before the events of Flashpoint, which I think is largely there to highlight why he has such a problem with his son being Batman. Thomas is shown to have endured nothing but pain and loss to the point of his suicide and the destruction of the entire world being the motivation for him helping the Flash in the Flashpoint storyline. I think it is interesting that in this reality, Catwoman was a partner and surrogate daughter for Thomas, only to have her be taken away from him violently at the hands of that reality’s Joker.

I do find that this issue feels a bit abbreviated and I think that this information should have been given more room to breathe in this story, but given that this issue takes place after the first punch of what is likely to be the big confrontation that ends this story, its probably best to not draw this out at this point. If anything, I wonder if it would have worked better for pieces of this story to be parcelled out throughout the City of Bane arc and not left to just this issue. I get not wanting to reveal just how Thomas got here till the end, but there wasn’t really much of a reason to leave a lot of this information till the end of the story.

The story makes great use of Jorge Fornes’ moody art. The heavy use of blacks is a perfect way to showcase Thomas’ darker world view and works for this sort of story.

Final Thoughts: Let’s be honest; there are no big shocks in this issue. We get some new information but that’s not really the point. This issue serves as an argument as to why a character like Thomas Wayne would essentially become the villain of this story, and I think it’s successful at doing that.