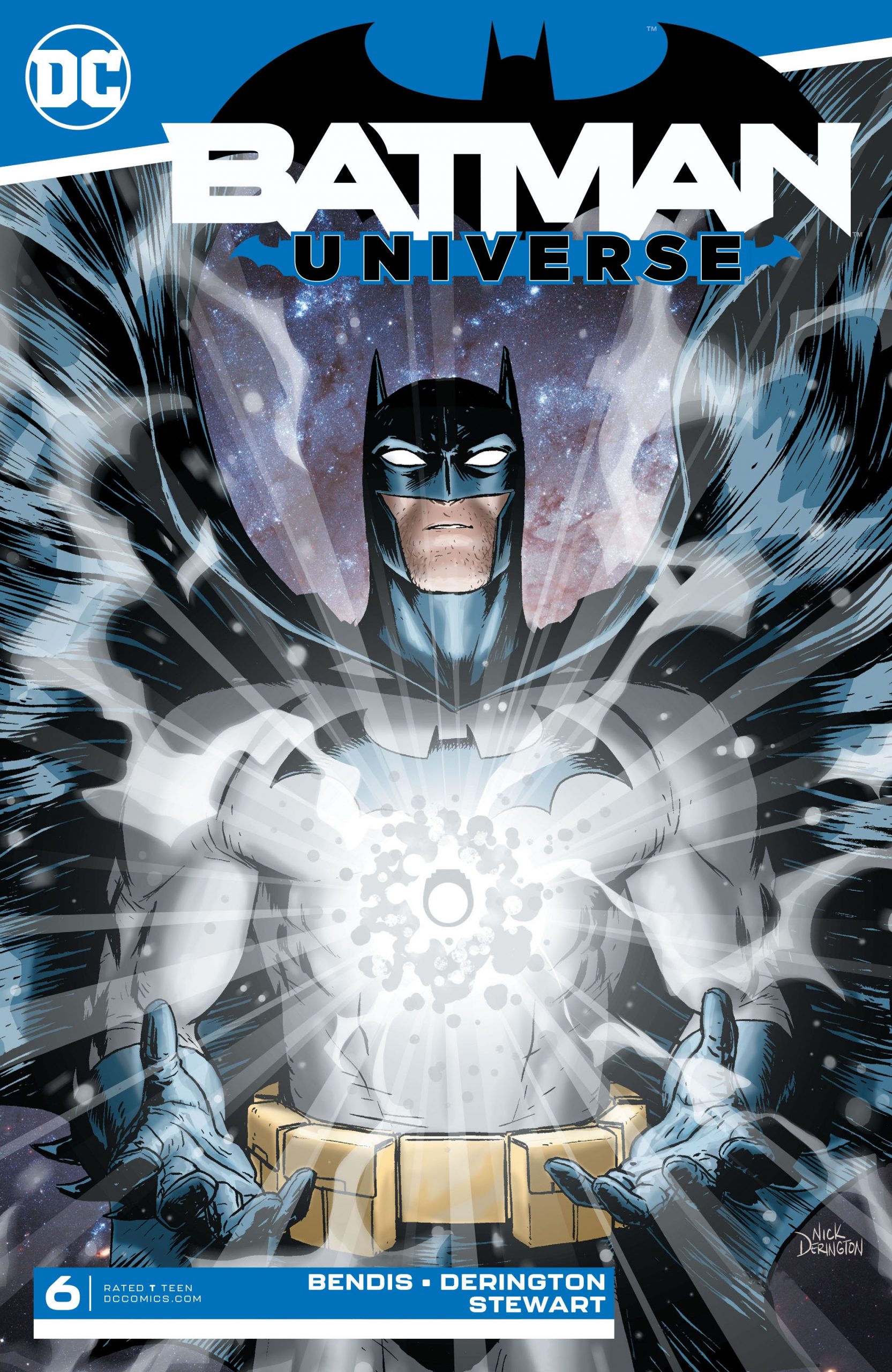 Overview: Batman tries to confront and fix the flaw in the White Lantern ring, all the while fighting against Vandal Savage who is determined to acquire the unstable power for himself!

Synopsis (spoilers ahead): This issue kicks off with Batman inside the program of the White Lantern ring, where he discovers he is talking with what seems like a Guardian, but is, in fact, a program, and one corrupted over time, explaining the unstable powers of the egg and the ring contained within.

Meanwhile, the battle rages outside, with Batman lying prone in the physical world. The ring eventually rejects him and accepts Vandal Savage, who has long sought after it’s power. Vandal Savage quickly shows he is going to abuse the power, which he has studied and prepared for, but does not understand. He tries to wipe the existence of Batman from the universe, wiping any trace of him ever existing at all, but this quickly backfires as Bruce Wayne in alternate realities is seeking to get back to the ring program. He achieves this, finding a broken Vandal Savage, who is trapped inside the program without hope. Batman reclaims his heritage and punches Vandal Savage, who flees. Batman pursues him across various realties, and eventually, reclaims the ring, and gives it to one of the Green Lanterns, with the instructions to take it far away.

Savage meanwhile has landed back in the Wild West, where Jonah Hex and a posse arrest him! Batman then returns the egg to the museum and all is right with the world again.

Analysis: This is a strangely inconsistent issue, at times allowing moments of breath in the storyline, such as when Batman is inside the program of the White Lantern ring, and then oddly rushed collages that do not give due credit to the ideas vaguely glimpsed behind them. It’s cool we saw Golden Age Superman or glimpses of Darkseid and Mister Miracle, but really is there anything satisfying or even that pivotal to the plot in these moments? Not really.

As is now typical for a Bendis book the dialogue is corny and sub-par, Vandal Savage seems ineffectual, prone to talking in that trademark “Bendis speak” we have become so overly familiar with across the last two decades, and frankly it’s where you wish the editors were pulling Bendis up. His dialogue isn’t a strength anymore – it hasn’t been for years. It’s a bland uninteresting weakness as he cruises on his rep. When you compare this Vandal Savage against the animated version of the character in Justice League: Doom, which itself is a reinterpretation of the comic book story Tower of Babel, it is almost embarrassing to see how clumsy and just how “trope-y” of a bad guy he is – it’s extremely unsophisticated storytelling and it’s also quite bad. A little bit of effort and we could get past this, but unfortunately when Bendis tries to be funny, it falls flat. I’d almost prefer him to play it straight.

So what is good in this issue? It’s obvious. The art by Nick Derington is brilliant, the use of white and light swirly pastels when inside the program only serves to remind us of the power of the medium and the image of Batman himself. The double-page spreads of Green Lanterns fighting is beautiful, but we never feel connected to the fight, the so-called cosmic stakes feel small and almost insignificant.

There’s a large amount of “wrap up” in this issue which feels very much like stuffing the present back in the box. Do we ever really understand what is going on with this original ancient power ring and program – kind of, but it’s not particularly coherent. For the entire series Bendis was obsessed with Batman traveling across the universe, exposing us to all the wacky sites from Jonah Hex, to Gorilla City, but by the book’s end I’m left wondering if this had any depth or point at all – the conclusion had some lovely art of Batman inside the program, but the explanation and payoff for it all was somewhat lacking. Bruce Wayne was never Batman, but something else…it’s not particularly clear what. And for new readers, its close to incomprehensible. Indeed, it almost ends with “aw shucks!” Never a good way to go out.

Final Thoughts: Overall this is a very average comic book story with beautiful art. It glides by on the surface, but is curiously unsatisfying and is still filled with trademark Bendis-speak that only drowns the material in an ocean of average. A middling ending for a middling series. This is for Bendis and Batman completists, but it does contain amazing art.