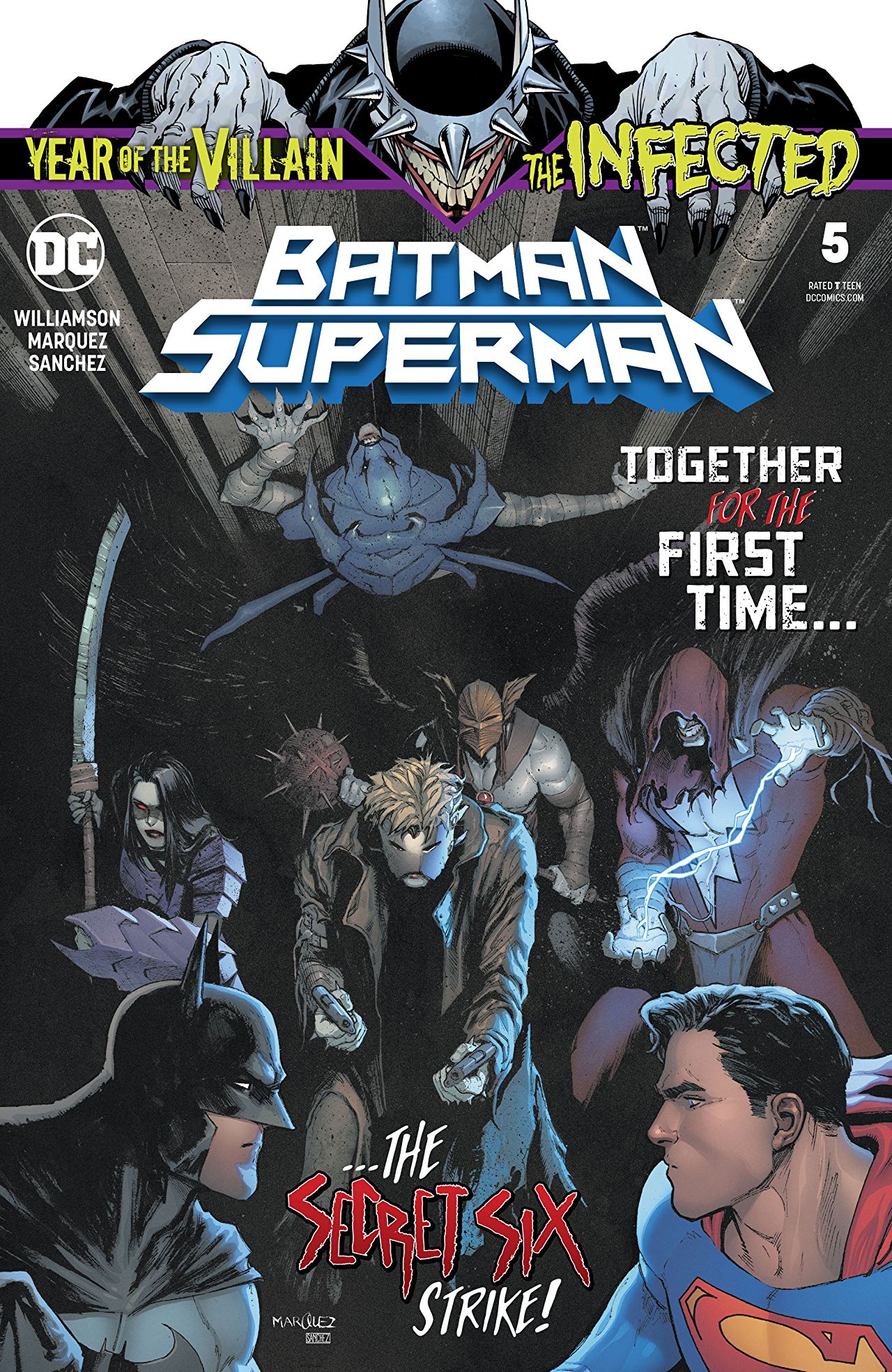 Overview: Batman and Superman stop the Secret Six, but their victory comes at a cost.

Synopsis (spoilers ahead): Superman dwells on a comment his father made: One weed can kill a whole crop. He often worries his universe is a bad weed infecting the multiverse. Batman ponders on the idea that they are the true bad guys. They let down Jim Gordon, Supergirl, Donna Troy, Blue Beetle, Hawkman, and Shazam. Batman, Superman, and the rest of the Justice League could have done a better job of investing in these six. However, the Batman Who Laughs used their failure to his benefit. He has given the six a purpose – a purpose to end this world.

In order to grab a moment and regroup, Batman shouts a Kryptonian command, and the exotic creatures in Superman’s fortress break out of their confinement and attack the six. Batman tells Superman the only chance they have is for one of them to stop the tower and the other stop the satellite. Superman flies to the satellite and is met by Shazam and Supergirl.

Superman flies into the satellite and sees the carnage the Batman Who Laughs left behind. Superman sees his old Justice League strung up on the wall. Horrified, Superman turns and sees a deceased version of himself holding Lois. Filled with rage, he does not hold back anymore. He attacks both Supergirl and Shazam with a vengeance, avenging the dead heroes of the Batman Who Laughs’ universe.

Superman throws the satellite into the sun and Batman blows up the tower. They capture Gordon, while the other five escaped. Gordon hints that the five took off to the Hall of Justice. Worried, they immediately go to the Hall to see the destruction they left behind. They broke out the Batman Who Laughs from his confinement under the Hall of Justice.

Superman realizes that their world is not the weed that hurts the universe, but it is their lies that jeopardized the world. They had to come clean to the rest of Justice League. They can not stop the Batman Who Laughs and his five agents by themselves. They predict Wonder Woman is going to be the most furious with their deception.

Analysis: I was super excited about this series when it was first announced. But, I have to say my interest is waning with each and every issue that I read. I, unlike many at TBU, like the Batman Who Laughs and am excited to see more of him in the DC Universe. However, I have not been impressed by the Secret Six. I understand their purpose. Although corrupted, their underlying distrust of the League was well earned. However, Williamson writes them in an unconvincing way. They just haven’t seemed to connect with me.

One of the positives of this book is the dynamic between Batman and Superman. One can see the differences between the heroes in how they operate and view the world, but they come together in a way where they bring out the best in each other. It is a fun dynamic to see, and Williamson does a great job at it.

In comparison to the last issue, the art definitely took a step backward in this issue. Everything feels flat and fake. There is not much depth in each panel. This is easily David Marquez’s worst issue of the series. For the record, this does not imply the issue is terrible. I have definitely seen much worse art this week. But, it is not where it could be.

Final Thoughts: Overall, I am pretty neutral on this series. I hope the next arc really hits home because I am starting to lose interest in this series.