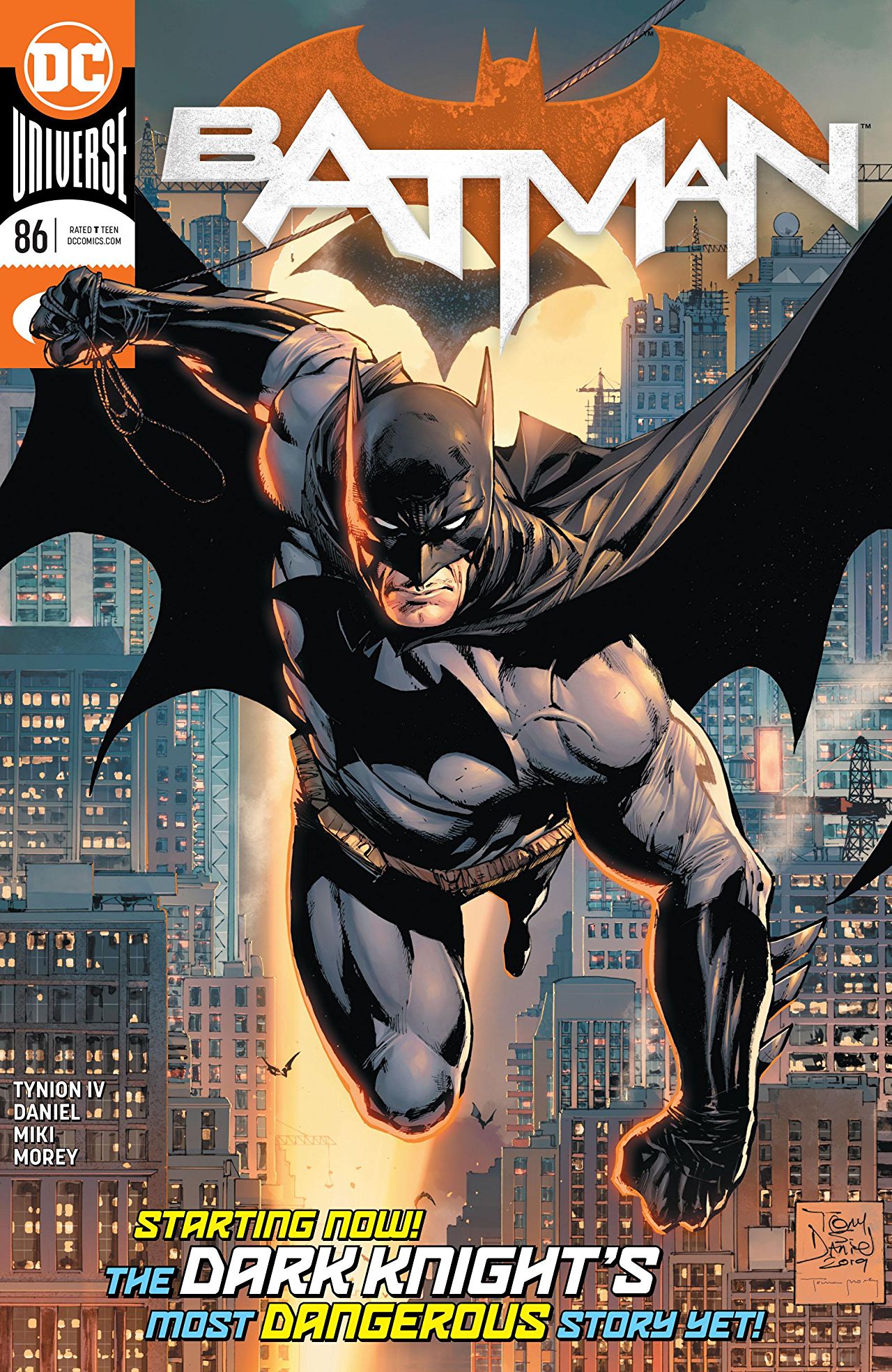 Overview: Batman unveils a new all-terrain vehicle to help him battle five contract killers, including Deathstroke, who have just arrived in Gotham.

Synopsis (spoilers ahead): Outside a club in the Cauldron neighborhood of Gotham City, a doorman falls to the pavement, poisoned with venom from Sea Wasp, a unique type of jellyfish. As he dies, the assassin known as Cheshire walks past him, entering the club he was bouncing for. Inside, Cheshire greets Merlyn and two other assassins named Gunsmith and Mr. Teeth.

Across the city, Selina Kyle attends a wealthy socialite function at Tricorner Yards running defense for Bruce Wayne. She communicates with Batman via a receiver. Selina is looking for something. While she admires a pearl necklace belonging to the mayor’s wife, a suspicious man with a bowtie watches her from afar.

Batman then checks in with Lucius Fox, who is at the new Wayne Enterprises Tricorner Yards Campus sub-basement creating a new vehicle called the Nightclimber. Lucius shares his reservations about this vehicle’s lack of testing, but Batman deploys it.

Across the street from the club in the Cauldron, Batman ruminates on a rooftop. Days ago, he was alerted to a dark web posting about a high-profile assassination in Gotham City. The highest-paid assassins were brought to Gotham with Deathstroke in charge. Batman has been preparing to take them out ever since.

Once the Nightclimber is in position, Batman uses it to assault the club. It distracts and traps Cheshire, Merlyn, Mr. Teeth, and Gunsmith while Batman takes on Deathstroke. As the two fight, Deathstroke tells Batman that Bane made a fool out of the Bat. Slade taunts Batman further, divulging how criminals think Batman’s gone mad. Deathstroke then says that his group of assassins is simply a diversion from the real prize, but Batman is already aware.

Meanwhile, at Tricorner Yards, that mysterious man with the bowtie is about to push some sort of a trigger. Selina Kyle, in her full Catwoman suit now, intervenes and demands an explanation. The man begins to die from the same venom the doorman was killed with earlier in the issue. As he dies, he reveals that he’s enacting designs meant to replace Bruce Wayne’s.

A speaker erupts from the dead man’s throat. The voice is reminiscent of the Joker’s, or meant to appear that way, and it taunts Catwoman about this event being the first step of a “perfect crime” she once knew about.

“Bruce Wayne has a design for Gotham City,” the voice says. “But so do we.”

Batman has Lucius inform the GCPD to prepare five cells for the incoming assassins. He loads a defeated Deathstroke onto the Nightclimber and takes flight, thinking of all of the times he and Alfred would disagree about a day when Gotham wouldn’t need Batman. In this moment, Bruce remembers that Alfred believed that Batman could create a Gotham where Batman didn’t need to exist, and the limitations Bruce presented in that scenario were self-created.

“I think what’s possible is only limited by what you believe is possible,” Alfred once said.

In an epilogue, a few henchmen in clown masks burn their fellow henchmen alive. They’re following orders to make sure nobody talks, which means silencing hired help who know the greater workings of their employer’s grand designs. As a carnival burns down, the last remaining henchman shoots his colleague before calling in and confirming that the deed is done. As he calls in, an explosion silences him, too.

Analysis: This debut issue from James Tynion IV and Tony Daniel sets a strong tone and precedent for what we can expect from this Batman run. On the one hand, it affirms key events from Tom King’s Batman run as important and relevant in this new creative direction. From the start of the issue, we see Batman grappling with the loss of Alfred. We also see Selina Kyle affirm that Bruce Wayne and herself maintain an intimate relationship in front of Gotham City’s mayor. Ms. Kyle speaks on Bruce’s behalf publicly, as well as communicates with Batman privately as Catwoman stalks her prey from behind Selina’s public persona. The dual pairing of Selina Kyle/Bruce Wayne and Batman/Catwoman is subtle, yet speaks volumes to their commitment to each other from both their public and private identities. It suggests a devotion on their parts that extends beyond just the Bat and Cat dynamic, that they’re wholly committed to one another.

During Batman’s battle with Deathstroke, Slade drops a reference to the events of “City of Bane,” as well as Batman’s mental breakdown that was key to Tom King’s run. This further embeds the idea that, not only did King’s run matter, but it will play an important role in how Batman’s rogues view him. One could even argue that we may be seeing the foundation for a status quo shift in how Batman interacts with his villains.

On the other hand, this introductory issue to Tynion and Daniel’s run introduces a new direction for our hero. After the death of Alfred, Batman is redesigning Gotham, so that it may no longer need its Caped Crusader. He’s looking beyond his mental limitations and believing in the dream of Alfred in a way that mirrors Alfred’s unwavering belief in Bruce. The idea is beautiful, touching, and harkens back to that father-son dynamic Bruce and Alfred have shared over the years.

Along with Batman’s new goal, we’re reintroduced to some old faces (Cheshire, Merlyn, and Deathstroke) and shown some new faces, too (Gunsmith and Mr. Teeth). These introductions set an expectation that we’re probably going to see quite a few rogues over the course of this run, both familiar and fresh. We also are introduced to a new vehicle in the Nightclimber, and we’re teased a grand conspiracy we’re led to believe is orchestrated by the Joker.

There is much to unpack in this issue, but the important point to note is that Tynion and Daniel have laid a framework for how this run is going to play out. This blending of the new and familiar sets a precedent for what we can expect going forward, and as long-time fans, it also affirms the idea that there is weight and importance to the plots and stories that have come before.

Beyond just an introduction to this new creative direction, Batman #86 succeeds in balancing an emotional, contemplative Batman pushing on in the face of Alfred’s death with a fast-paced story that delivers a feeling of fun and excitement. Much of this success is in Tony Daniel’s reliance on a consistent adherence to five-panel pages that draw readers’ eyes downward, from top to bottom, intermixed with half-to-full page spreads that linger on Batman or Deathstroke and key action points.

There’s a rhythm achieved in the consistency of Daniel’s artistic choices here, and this rhythm does the heavy lifting in balancing Tynion’s beautiful, contemplative inner monologuing with snappy dialogue as this issue alternates between Batman’s anguish and Gotham’s criminal undercurrent. It’s masterfully done, and it’s why we’re able to witness so much foundation for the new creative team laid out without the issue falling to pieces with these many moving parts.