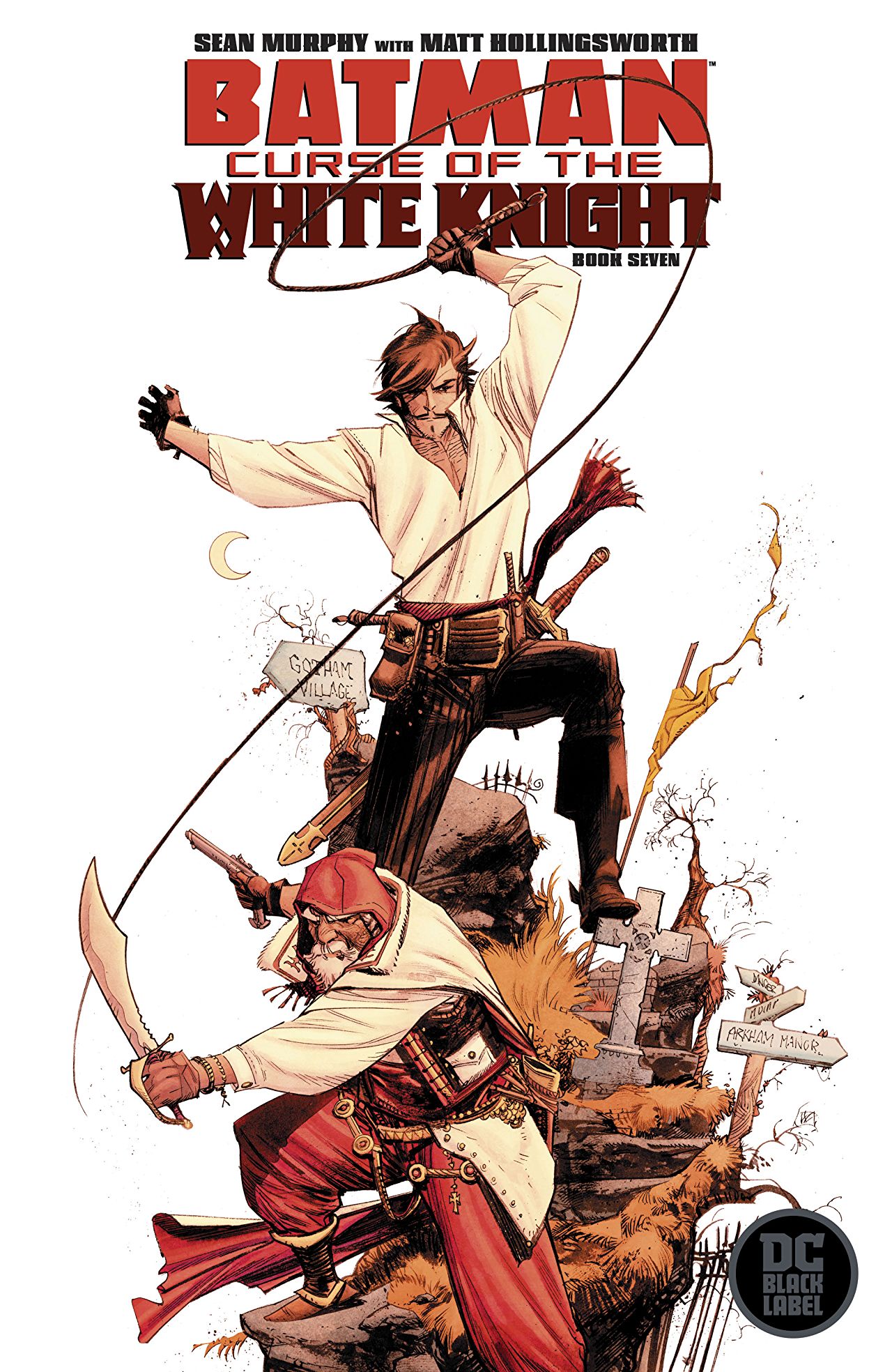 Overview: Batman makes an irrevocable move in his battle against Azrael as the final fight approaches.

Synopsis (spoilers ahead): Young Bruce stares at swords, grieving with Alfred about his guilt over asking his parents to go see Zorro. Alfred promises to teach him to use the swords, and they head off to Thomas and Martha’s funeral.

In the present, Batman tells Harley he wanted to be a knight and is struggling with the discovery that he isn’t a Wayne at all. Harley tries to convince him that his mother, father, and he have always tried to do what’s right, and their blood shouldn’t matter – but Bruce reveals that the evil Ruth was using his company for her own wicked ends. In response, Harley tells him that Gotham forgave Joker when he took off his mask, and they will forgive Batman if he does the same and promises that she’ll always be on his side.

Azrael swoops over the city to his apartment, then discovers he’s down to the last medication that allows him to continue functioning.

Bruce meets Barbara as she works on her physical therapy – her spine wasn’t broken, and she’s recovering. Bruce apologizes for not attacking Azrael with Barbara and tells her his plan to end Batman and unmask. Barbara embraces him and tells him her father would be proud.

Commissioner Montoya announces a citywide manhunt for Azrael, but Batman hijacks her broadcast to unmask, announce his plan to support Jack Napier’s plan from the first series, giving his entire fortune to the city, and surrender to the police – once he finds and takes out Azrael. He asks the city to help him do that. An angry Montoya confronts Batman about his plan, but he insists that the people of Gotham will help save the day and gets in his last remaining Batmobile, the oldest (inspired by the 1989 film design), and heads out to battle. Dick tries to get him to remember his code, but Batman claims that his code is dead, just like Azrael.

Standing in the middle of the city like a western gunslinger, Bruce hears Montoya when she tells him that they have a lead on Azrael, jumps on his steed, and explodes into action.

Analysis: Sean Murphy’s sequel saga to his smash hit Batman: White Knight is building to its conclusion, though sadly a combination of extremely obvious plot foreshadowing and very shallow character writing leaves it feeling underwhelming. We have one of the first times where the art has felt at odds with the emotional impact of the scene. This occurs in the scene between Bruce and Harley, where we see a very odd pose of Batman, splayed out like a king on a throne, just as he’s supposed to be the most distraught. That scene also hints very strongly at a romance between Harley and Bruce, which also seems to indicate that it will end tragically with Bruce dying in his quest to stop Azrael. Murphy’s comments about how he wanted to actually kill Bruce off in the first series support that reading and foreshadowing, which leads to a sense that Murphy is just going for moments that evoke strong emotions, rather than creating something that grapples in a more mature way with the kinds of questions he’s tried to raise about pain, suffering, loss, family, and heroism. Batman’s despair at the “loss” of his identity as a Wayne probably is Murphy’s attempt to parallel his decision to “kill” Batman as a secret identity, but it doesn’t ring true as a response at all, leaving the issue to feel very shallow in terms of character motivation.

In addition to paying off Batman’s revelation of his secret identity that he’s been building to the entire series, Murphy also layers in a few strong references to previous Batman films. The plea that Batman gives to Gotham City for help parallels both Batman and the Joker’s endgame plots in The Dark Knight – with an appeal to the nature of the citizens of Gotham and the crowd-sourced phone surveillance device. And, of course, the “Let’s get nuts” line stolen directly from Michael Keaton’s unforgettable delivery in Batman (1989). Murphy makes these moments feel relatively organic, but it doesn’t really serve the character in a way that gives the character new meaning or fresh context.

Murphy’s main cover shows Edmond Wayne looking very heroic. This series really has a weird sense of what covers are appropriate. The issue has almost nothing to do with Edmond’s character directly, and there’s no reason for readers to feel like he’s a very cool or admirable figure at this point, so giving him a Count of Monte Cristo cover doesn’t work well at all outside of the visual appeal of the piece itself – which, to be fair, is strong on its own. But like the Bane cover for the last issue, Murphy seems to have a desire for certain images, rather than a strong narrative connection to those images that he’s able to execute within the story. The Harley variant is much more appropriate to the content of this story, though Joker being there makes it more of a pinup than anything that directly links to the interiors.