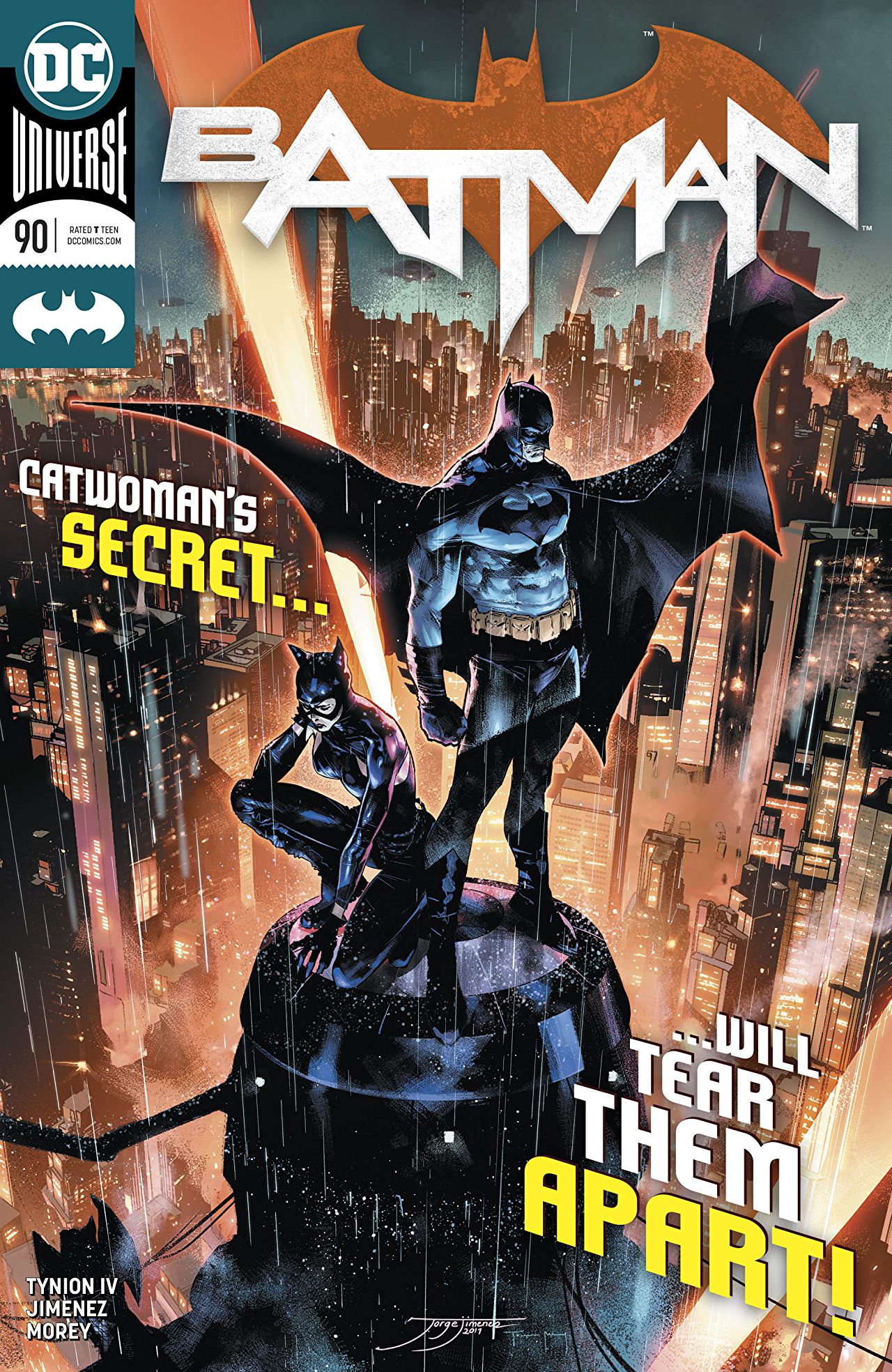 Overview: Catwoman reveals to Batman the origin of the Designer and how this new foe came to meet the rogues’ gallery.

Synopsis (spoilers ahead): Deathstroke races through the Diamond District on his motorcycle. Over his comm, he checks in with his fellow assassins. They’re all out cold, and the only voice who answers him is Harley Quinn. She’s been left in charge of the Batspawn drones, using them to pursue Deathstroke.

On the rooftop of Riddler’s secret base, Batman and Catwoman finally have a moment to themselves. Catwoman admires the cityscape, noting all of the new structures currently under construction in Gotham. Batman then tells her that she needs to talk. She apologizes and then reveals how she first encountered the Designer.

Early on in Catwoman’s career as a thief, she found a card with the letter “D” and a pier number on it on her pillow one night. There were rumors back then of a master criminal, but she assumed it was an urban legend. When she went to the pier indicated on the card, she saw that Joker, Penguin, and Riddler had also received cards. Shortly after, a boat named “The Styx” arrived. The boat was driven by one of the Designer’s zombies, and it led the four rogues to a mysterious home on the waterfront called the “Tartarus House.”

Before Selina gets to the reason why the Designer brought them to this apparent dinner party, she reminds Bruce that it was a different time back then. The crime was different and ruled by a type of criminal who no longer runs Gotham. Batman was different back then as well. Selina notes that Bruce was acting as more of a role model then, as he had a young ward in Dick Grayson.

Bruce tells Selina that there isn’t time for nostalgia. She responds by telling him that this trip down memory lane is important. In years past, Bruce wasn’t as beleaguered with as much pain and suffering as he is now (particularly after the death of Alfred). He was another person in some respects, and it was at this time when the “complexities” began.

Back at the Tartarus House, the Designer tells a tale of a time when he was a young criminal. He had his own detective adversary, and the two would battle it out over and over again. Each time the detective thwarted him, the Designer would concoct a slightly more complex plot. They would play this game until the Designer realized he wasn’t evolving fast enough. He took the time to grow and develop and came back with a highly evolved master plan. With this new plan, the Designer killed his opponent and affirmed his legacy. He had evolved well past the designs of the game, thus earning his namesake.

At the close of the Designer’s tale, he tells the gathered villains that he wishes to help them with their Caped Crusader problem. He wants to evolve them to their final forms so that they can avoid “the game” and transform Gotham City into their personal playground.

One-by-one the villains enter the Designer’s office and talk with him. Catwoman tells Bruce how the Designer was kind and friendly. He asked her questions and helped her cultivate an elaborate plot years beyond her thinking. The Designer did the same for Penguin and Riddler. When the Joker went in, however, everything changed.

“I told him a joke. He didn’t think it was very funny,” Joker replies. “Then he tried to kill us. I just saved your life, Ozzie.”

The rogues lament that, without the Designer’s funding, they won’t be able to concoct their new master plans. Penguin then says that he will have the Designer buried in Potter’s Field. He says that they should pretend that this meeting never happened.

Once they leave Tartarus House, the four burn it down. Selina watches the Joker as Penguin and Riddler set the home ablaze. She tells Bruce that the Joker was different after that night, that there was something more unsettling and evil about him.

Batman interjects that there’s still something Catwoman isn’t confessing. She admits that it’s the hardest part, but if the Designer is using their plans against them, her ultimate crime was robbing the Wayne fortune — Wayne Manor, the company, everything.

The issue ends with Batman swinging off the rooftop and Catwoman watching him with a look of horror upon her face.

Analysis: I had to read this issue a few times before I truly appreciated it for its many moving parts. It’s very wordy, and with regard to pacing, it’s a much slower departure from the nonstop action we’ve come to expect in James Tynion’s run thus far. However, it’s jam-packed with information about where this series is going, where DC may be going with 5G, and Tynion’s feelings on the current status quo of Batman.

Before breaking down the nuances of the story, let’s talk about Jorge Jimenez’s art. With the assistance of colorist Tomeu Morey, Jimenez deftly manages a balancing act between two different tones and moods in this issue. We have flashbacks to the early days of Batman, where the mood is much softer, happier, and more mystical in nature, and we have moments that take place in the present, an era that’s rougher and more clouded and lost.

One of the best moments highlighting this change of mood is near the beginning of the issue when Batman and Selina first talk on the rooftop of Riddler’s hideout. In the present, Gotham is a labyrinth of construction equipment. The buildings’ edges are sharper, and there’s more of a fog and lack of clarity beneath the depths of the towering construction equipment and skyscrapers. Morey casts everything in an orange glow, one that helps cultivate an alertness and looks as if the city is ablaze.

During the first flashback, which depicts Catwoman in her classic outfit running across the rooftops, Gotham is clearer. The city’s buildings are more defined, and there’s more of an art deco style to them. This is a Gotham we’re familiar with and one we’ve seen in the likes of Burton and Schumacher films and beloved animated adventures. It’s a romanticized Gotham City, cast in shades of blue, which fosters a sense of peace and familiarity in readers.

This juxtaposition carries throughout the issue as we bounce back and forth between past and present. There’s a magical, almost fairytale-like element in scenes that take place in the past. The future, on the other hand, maintains a cold, harsher vibe that feels akin to Ridley Scott’s Blade Runner. It’s beautifully handled, and Jimenez deserves much credit for making sure these changes subconsciously inform our reading of the scenes.

The story to this issue is straightforward and essentially what we’ve been promised: an origin to the Designer. However, it infers quite a lot with regard to the status of Batman and where Tynion/DC Comics may be headed.

First, the Designer’s origin teases at Batman’s own origin. In the few panels depicting the evolution of the Designer into a master criminal, we see him sword-fighting a detective on a blimp, a train, etc. This detective looks eerily similar to Zorro, and the lack of color in these panels seem to double down on that reference — in that they create black and white images that would be indicative of The Mark of Zorro film established as Bruce’s inspiration in Frank Miller’s The Dark Knight Returns and Batman: Year One. It’s a nice nod, but there’s more.

This reference could extend beyond window dressing and potentially establish a Zorro-like character in the Batman universe. Within the framework of what we know about DC Comics’ plans for 5G, this could be teasing at a proto-Batman archetype down the road. Why else would this detective be such a blank slate an undefined? It reads as if the character has been left vague enough for someone to come along and fill in the blanks when the time is right. With Zorro being in the public domain, there’s even an opportunity to incorporate the character into Batman comics. More than likely, if DC were to go anywhere with this detective, it would most likely be an original creation. With Tynion’s very public love of Batman: The Animated Series (see the last issue for a super cool reference), perhaps we’ll see the introduction of a “Gray Ghost” mentor for the comics?

Batman #90 also continues to drum up intrigue for the “Joker War” arc coming later this year. Clearly, whatever the Designer saw in Joker all those years ago will be unfolding in the near future. This comes as no surprise, but it’s nice to see the framework of one story arc setting up and feeding into another.

Another note-worthy reference is in Selina breaking from her recollection of the past to remind Bruce of what he used to be like way back when. I don’t think it’s necessarily a jab at the darker Batman we see most often in comics these days, but Tynion clearly has an appreciation for Batman in more of a fatherly mentor role. It’s nice to see this callback, and one hopes this is Tynion’s way of letting readers know that he intends to bring Batman back into this role as a positive mentor figure.

This brings us to the actual plot of the flashback. Upon first reading, I didn’t really like it. I found it underwhelming and a little lackluster after how much the Designer had been hyped up. Our newest foe invites Batman’s classic rogues to dinner, talks to them for hours, and then takes a bullet to the back of the head. That’s not the most exciting plot in the world, but when viewed as the center of a web that Tynion is weaving, this issue’s story serves as a great launchpad to carry us through whatever is in store for us.

It should be noted, the River Styx and Tartarus are references to Greek Mythology. Tartarus is the deepest realm of Hades, and the River Styx is the border between the living world and the underworld. To put it simply, Batman’s rogues traveled into the deepest, darkest pit of the underworld when they went to meet the Designer at Tartarus House. This is quite literally teasing at the Designer being at the heart of “the underworld,” but what that means we have yet to see. For the moment, it’s bluster.

As I said, the Designer just invited our rogues to dinner, one he didn’t survive. Who knows if the present-day “Designer” is even really the same guy?

Final Thoughts: Upon first glance, we get terrific art and a serviceable introduction to the Designer. Scratch deeper, and you’ll find there’s a whole lot more going on in this issue.