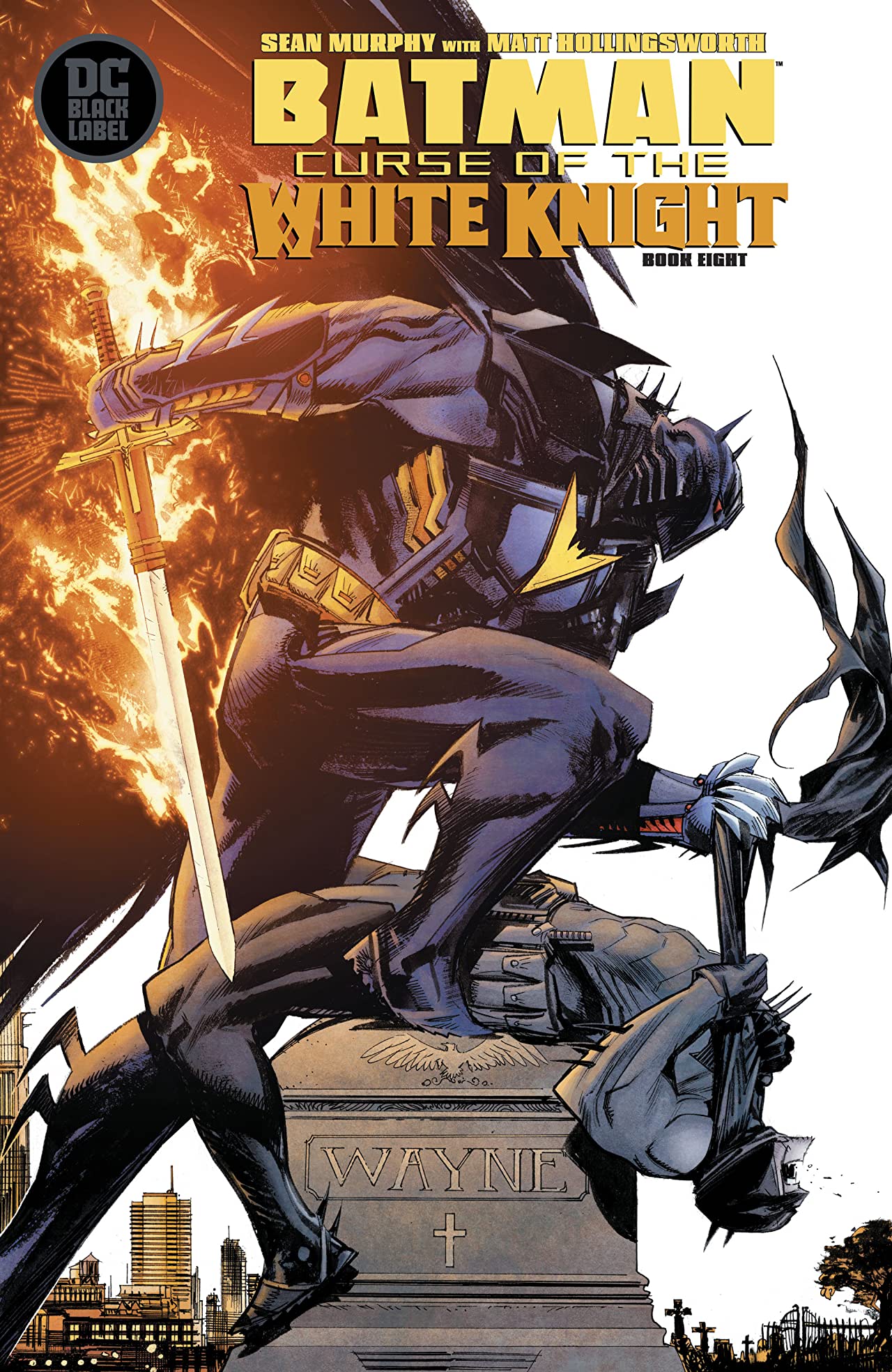 Overview: Sean Murphy’s second tale in the world of White Knight ends in fire and blood – but also possible redemption.

Synopsis (spoilers ahead): The GCPD chases Azrael, but when Batman feels he’s close enough, he shuts down their cars and races ahead to the battle. Azrael leaps aboard the Batmobile, and a violent scene ensues, ending with Batman arising from his vehicle with a machine gun in hand after he flings Azrael into a jetliner.

The two battle until Azrael holds Batman by the throat, trying to persuade Bruce to join his crusade. Dick Grayson crashes into Azrael with his car, freeing Bruce, and attempts to persuade Bruce not to kill Jean-Paul. Batman tells Dick that Azrael intends to destroy the reservoir and flood the city. Batman roars towards his final confrontation, remembering all the people who encouraged him to be the best version of himself – Alfred, Dr. Freeze, Gordon – and plunges off the side of the reservoir, transforming the Batmobile into a boat.

He challenges Azrael to a duel, wielding two rapiers vs. Azrael’s flaming sword. Bruce slowly forces Jean-Paul to shed his armor and technology, and Azrael finally goads Bruce into cutting his throat – but Batman gives him emergency treatment, saving his life. Jean-Paul reveals that his great-great-etc-grandmother was Edmond Wayne’s illegitimate daughter, mirroring the discovery that Bruce is actually descended from Bakkar, the corrupted Order of St. Dumas Knight.

Later, a suit-dressed Bruce surrenders to Renee, after embracing his family, and gets into the transport, only to discover that Harley means to break him free. He persuades her to let him serve his time in prison, and she agrees, drawing a heart on the rain-streaked window before leaving him to his fate. In the coming weeks, Wayne’s fortune is given away to Gotham, and a strange visitor arrives in Bruce’s cell…named Todd…

Analysis: Though the last half of his second arc in the White Knight universe (also called the Murphyverse) has been significantly less effective than the first half, the ending still manages to both offer some satisfaction and one major subversion. Though Bruce Wayne does give up the cowl, Batman doesn’t strictly die, and instead, Bruce seems poised to follow yet another twisted trail left by the Joker with the mystery of his first Robin, Jason Todd. With no sequel announced, Murphy no doubt wishes to pursue other projects while his ideas develop.

Murphy’s adoration of Tim Burton’s Batman, particularly in designs, shows blatantly here with the Batmobile’s shield configuration. The art in this book remains its strongest selling point, though Murphy’s decision to kill off so many characters, particularly the Joker/Jack Napier, is not quite filled in by his having Harley and Bruce fall in love. Murphy’s Bruce is nowhere near as interesting as his Joker/Jack, though his Harley remains fairly engaging. We’ll see if Murphy has left enough characters alive to fill in future stories, given the slaughter at Arkham a few issues back.

A last note on the writing – the reveal this issue that Jean-Paul was actually a Wayne, trying to parallel the reveal that Bruce was not actually a Wayne, similarly falls flat, since none of these characters are deep enough to evoke any kind of real emotion or sympathy from these reveals (and they aren’t particularly compelling anyway), and the idealization of Bruce giving away his money and solving Gotham’s problems ignores the moral/philosophical iconography of Batman in favor of much shallower political/class commentary. In the end, Batman: Curse of the White Knight provided a whole lot of great comic art, especially for fans of the Tim Burton Batman, but didn’t provide a whole lot of iconic ideas for Batman in a way that will penetrate the mainstream as Frank Miller’s Dark Knight Returns did thirty-four years ago.

Final Thoughts: Curse of the White Knight gives an exciting ending and a way forward to new stories.