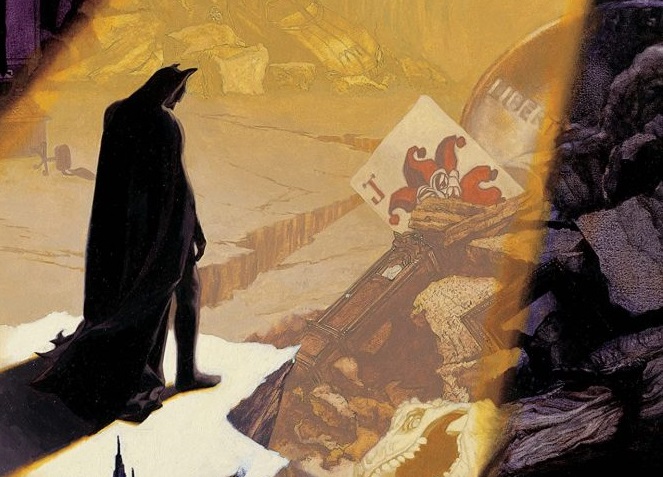 With new comics starting to get back to normal within the next few weeks and many of our favorite restaurants and public hangouts still closed, the mandatory COVID-19 shutdowns sweeping the globe mean more time sheltering-in-place at home with our families and our never-ending stacks of books. (We don’t know about your book towers, but despite having more time, our towers have only grown.)

In many cases, this has meant downloading and discovering books recommended by a friend, rereading old favorites, supporting our favorite local comic shops by ordering anything they have in stock, or finally taking a chance on that book that’s been on the shelf for years and remains, as of yet, untouched.

Here at The Batman Universe mission control, our staff members got together (digitally, not in person) and discussed our absolute favorite essential reads. These are the Batman-related stories we can’t live without. These are the ones we think of when we think of all-time greatest Batman adventures. This list encompasses our go-to collection of titles we recommend to new readers looking to dive into the goings-on of Gotham City.

Whether you’re in the ballpark for a new collection of Batman stories to plow through or looking to see if your favorite Batman tale made the cut, this list is for you, fellow Bat-fans! Read through, and let us know in the comments below if we missed one of your absolute favorites.

Together, let’s share our love of all things Batman and celebrate our favorite comic book universe with some of the absolute greatest stories around. 1. Batman: A Lonely Place of Dying

Synopsis: Batman is spiraling after the death of Jason Todd. Meanwhile, Dick Grayson is rediscovering himself, and Two-Face is back and terrorizing Gotham.

“This tale underlines why Batman needs a Robin and why Robin is important. It’s also the introduction of Tim Drake, who would later go on to become one of the top fan favorites in the role of Robin.” (Rob Myers, Host of Robin: Everyone Loves The Drake Podcast) Synopsis: Batman must dig deep within his own mind and analyze recent events in Gotham City to put together clues as to who the real mastermind behind his latest troubles have been.

“Though often reviled, I found it a dramatic, funny, romantic, and above all, a deeply moving meditation on the question “Who is Batman?” With some of the best art in the business – Mikel Janin, Lee Weeks, Jorge Fornes, Amanda Conner, Yanick Paquette – Batman has never looked better.” (Ian Miller, host of The Batman Universe Comic Podcast @ibmmiller) Synopsis: In the early days of Batman’s career, he finds himself in the middle of a mob war while a mysterious criminal murders victims on holidays.

“This Batman story has everything: the most famous of the rogues’ gallery, a murder-mystery plot attached to different holidays and seasons, the origin of Two-Face, a mob war — everything! It’s the most singularly quintessential Batman tale to recommend someone who wants a crash course in everything that’s great about Batman. It’s perfect for new readers looking to start somewhere, and it’s great for long-time readers looking for a unique reimagining of their favorite Batman stories. Pick up the sequel Batman: Dark Victory, which furthers this storyline and also reimagines the introduction of Robin, The Boy Wonder.” (Scott Waldyn, TBU Managing Editor @scottwaldyn) Synopsis: Gotham City is deemed uninhabitable after a cataclysmic earthquake. Those who stay within city limits suffer through a turf war between rival gangs.

“This is quite possibly one of the largest reaching stories that the Batman group has ever released. All of the titles at the time were tied into this massive event comic. Not only was the event having some great setup leading into it, but the ramifications were felt for multiple years, and even years later, moments from this event were still acknowledged by other writers.” (Dustin Fritschel, TBU  Editor-in-Chief @BeardedBatChief) Synopsis: A new villain comes to Gotham City, one named Bane, and he releases Batman’s most devious rogues in order to wear the Bat down and defeat him.

“It’s essential because it’s a long, winding road that asks the questions ‘Why doesn’t Batman kill?’ and ‘Is Bruce Wayne Batman still relevant?’” (Rob Myers, host of Everyone Loves The Young Justice) Synopsis: Stephanie Brown assumes the mantle of Batgirl, including all of the trials, tribulations, and headaches that come with it.

“As our own Donovan Morgan Grant says, this book was an A-list book in quality with the reputation of a B-list book. Stephanie Brown is the heroine who could, and she inspires us all to make the world a little better every day with her attitude and smile.” (Ian Miller, TBU Comic Staff Member @ibmmiller) Synopsis: It’s April Fool’s Day, and the inmates of Arkham have taken over the asylum. Batman must undergo a gauntlet in order to free the hostages and restore order.

“This is another one of those Batman stories that has most of the top-tier villains together in one book. In this one, the inmates have taken over the asylum, and Batman must endure many trials to overcome his rogues gallery and retake the asylum from its new headmaster — The Joker.

“If that sounds like a familiar video game plot, that’s because this book inspired the popular game series. What makes this book stand out from most of the other Bat books out there, however, is its absolutely insane art style. Dave McKean’s painting style is unique, frightening, and unlike any other book out there.” (Scott Waldyn, TBU Managing Editor @scottwaldyn) #8. Batman: Battle For The Cowl

Synopsis: With Bruce Wayne gone, a rift opens in Gotham City, and members of the Bat-Family must battle to restore order and to claim ownership of the mantle of Batman.

“This is another great story that encompasses almost the entire Batman Universe. With certain events leading to this storyline, this storyline also marked the beginning of a new direction for many of the Bat-Family characters. A little known fact is that this event and subsequent effects on the Batman Universe was used as a trial for the upcoming New 52, which got a lot of things wrong, but this story did it right.” (Dustin Fritschel, TBU Editor-in-Chief, @BeardedBatChief) Synopsis: A mysterious new villain by the name of Hush arrives in Gotham and aims to turn Batman’s life upside-down and torment him at every turn. Batman’s rogues only only to eager to help where they can.

“If you want the summer blockbuster movie experience in a comic with crazy action and the entire world of Batman all in one place, this is it!” (Rob Myers, @DrummerRob10) Synopsis: After smugglers bring weapons of mass destruction to Bane’s city, the supervillain sets off on a quest to destroy whoever hired them. This mystery goes all the way to the top, and Bane finds himself on a conquest to take down a global crime ring.

“Chuck Dixon, creator of Bane, came back to his creation in this off-canon miniseries that sees Bane taking on Kobra in order to assume control over all crime on Earth. This story packs that bombastic 90s Batman-style seen in works like Knightfall, but it almost exclusively focuses on the world from Bane’s point of view. It’s wild, fun, and crazy underrated. The ending is also surprisingly sweet and could serve as an amicable understanding between eternal enemies, Batman and Bane.” (Scott Waldyn, TBU Managing Editor @scottwaldyn)