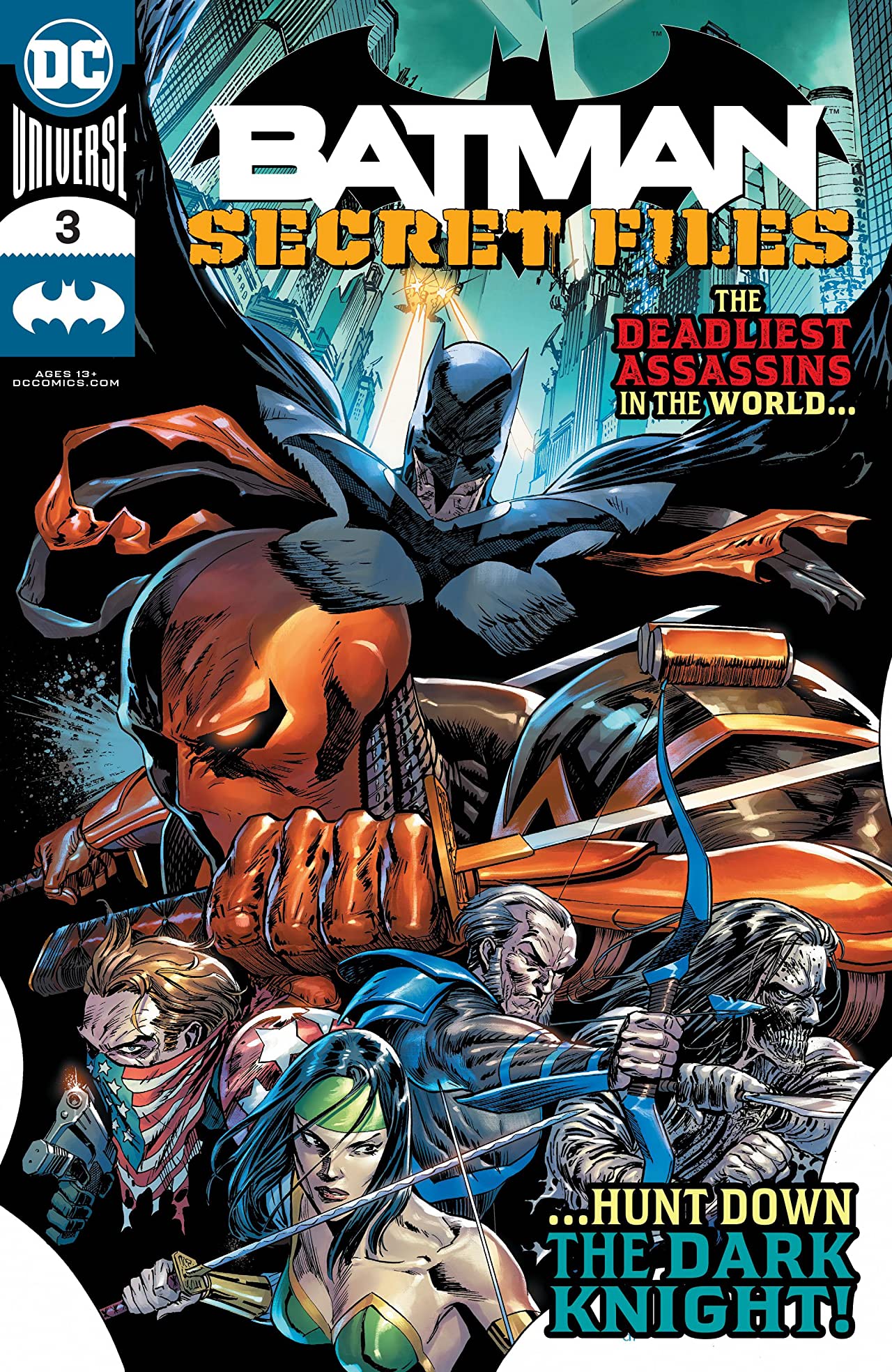 Synopsis: On the rooftops of Gotham City, Batman keeps watch on a wealthy philanthropist named Karl Fogle. According to Batman, this man is a beacon of light in the darkness of Gotham City, and there have been whispers of an attempt on his life.

Batman spots Cheshire nearby. He’s heard of her before. She’s young, new, and reminds him of Nightwing with her anger and lack of direction. Batman confronts Cheshire calmly, telling her that he’d like to help guide her away from darkness. Cheshire refuses, and the two fight. During the fight, Batman makes his case for leading her away from crime. Cheshire only digs in further, and at the end of the fight, she reveals that when he touched her gauntlet, he was already poisoned by tetrodotoxin.

Cheshire informs Batman that Fogle is dead and makes her exit. Batman narrowly escapes to the Batmobile while recalling the old fable about the scorpion and the frog. At Dr. Leslie Thompkins’ clinic, Leslie patches Bruce up as he relates what happened.

“Not everyone wants to be good,” Leslie tells Bruce. “Some people aren’t in the dark because they have no choice. They prefer it. They thrive in it. You have to accept that you can’t save everyone.”

“If you believed that, I wouldn’t be here,” Batman replies.

Analysis: At first read, this story may seem trite or even a little cliche. It’s just a brief encounter where Batman loses, draped with a fable about the scorpion and the frog that has been overused quite often in books, movies, etc.

However, that moment in the end when Batman and Leslie Thompkins talk about Cheshire is short, tender, and reaffirming why it is that many of us love Batman. When Leslie tells Batman that some people can’t be redeemed, he coolly disagrees with a quip meant to both prove Leslie wrong and make her contemplate how she truly doesn’t believe that either. It’s clever. We don’t get these moments too often in Batman, but they’re always a welcome palate cleanser that reminds us of why we’re reading these comics in the first place.

The art is exciting as well. Andie Tong’s action sequences between Batman and Cheshire are intense and really use the space allotted to create effective tension. They’re a highlight of this whole collection.

Synopsis: Green Arrow has come to Gotham to help Batman battle Merlyn, who is here to kill the Bat. As the two go out on patrol, they come across the Gotham Children’s Museum, which is burning. Green Arrow smells a trap, but Batman runs in as there’s a hostage inside.

As Batman frees the hostage, he’s shot in the back with an arrow. Batman runs with the hostage, counting on Green Arrow to seek out where those arrows are coming from and takedown Merlyn. Two more arrows impale Batman as he fights for a way out of the burning museum. The hunter becomes the hunted, and Batman ultimately manages to get the jump on Merlyn.

After Merlyn’s defeat, Green Arrow tells Batman that he needs to see a doctor. Batman defers to the child, who is more important. In the final panel, Batman walks away, holding the child bundled up in his cape.

Analysis: This story tries to centralize itself at the end of this idea of what makes Batman different from other heroes. It’s his willingness to sacrifice himself to save others, his dedication to putting others first, even when it could kill him. That’s a sweet sentiment, but it’s undermined by the narration. We’re told too much about Merlyn’s machinations behind this trap and about this idea of hunter vs. hunted that the sentiment is lost in all of these other ideas being toyed within this very short story. For a narrative that’s only supposed to last a few pages, it’s not always the best decision to run with so many ideas.

The art and coloring were both underwhelming as well. The character models seem off, and Batman appears to have put on a bit of a gut in a few panels. The coloring didn’t help, as the reddish-orange glow of the fire does more to highlight the emptiness of some of the panels in this museum than emulate the glow of the fire.

Synopsis: Out in a spooky house in the middle of Elbow Falls (nowhere), a girl scrolling social media on her phone is interrupted by the ghastly sound of teeth gnashing. To her horror, Mr. Teeth is in her house, and he chases her up the stairs of her home. Batman swoops in to save the day, knocking some of Mr. Teeth’s pearly whites loose.

Analysis: For the most horrific assassin in Deathstroke’s squad, the creative team chose to go with the most cartoonish-looking art. It’s an odd choice, but I wonder if there was concern that showing a more gruesome Mr. Teeth would mortify some of Batman’s younger readers.

Either way, the silly art deflates any sort of tension or horror this story may have carried, and it seems with how trite it is, this story put all of its eggs in the surprise and horror basket. For that, it’s easily the weakest “secret file” in this issue.

Synopsis: Gunsmith is holed up in Wayne Tower with hostages and a precious armory intended for Gotham’s Weapon Amnesty Program where guns are collected and melted down. The Gotham City SWAT team has the building surrounded, and Batman is looking for a way in.

Batman tries to talk Gunsmith (AKA Douglas Worth) down from his hostage situation. Gunsmith, however, is in the unique position to where he could turn anything into a projectile, and he manages to turn a hostage into a firearm — one that he sends toward Batman. The hostage fires at Batman, clipping him in the shoulder. Batman stops the hostage from firing again before pursuing Gunsmith.

At the top of the building, Gunsmith tosses another hostage off of a roof to make his escape. Batman saves this second hostage and encounters that first hostage again, and again, a gun is aimed at Batman. Batman talks this hostage down from firing, all while Gunsmith narrates about what he thinks Batman’s trigger is. According to Gunsmith, for a man who believes firearms are “America Incarnate” and to keep democracy alive, Batman’s trigger is his fear of America.

In the very last panel, as Gunsmith makes this final statement, we see a militarized SWAT team walking away from the scene.

Analysis: If any of these “secret files” were to spark any sort of discussion, especially now given the civil unrest, this would be the one. Dan Watters and John Paul Leon gifted us with arguably the most haunting of these tales, as we hear this story from Gunsmith’s side. We live in his head and are forced to read his proselytization of firearms. This association with firearms and America and liberty are explicit, and there’s no question in how we’re supposed to take this story.

“The Batman is afraid of America.” The words are as plain as day over that final panel of the police. The inference here is that America’s gun culture, from its gun collectors and conspiracy theorists to overly militarized police force, stand in the face of everything Batman stands for. He is a hero at odds with America’s love of the gun. Agree or disagree, it’s a bold statement to distill a nation down to one idea and place this in opposition of a hero that, even as Gunsmith admits, is purely American.

I’ll reserve my personal opinion on the matter, though I will say that it’s an interesting idea to add to a collection of tales that mostly serve to celebrate what we love about Batman.

Synopsis: We return to Batman’s one-on-one duel with Deathstroke from the pages of James Tynion’s current Batman run. Batman asks Deathstroke why he has returned to Gotham.

“I wanted to see a great man right before he lost everything, Batman,” Deathstroke replies. “And then I wanted to beat the hell out of him for letting it happen.”

One month earlier, Deathstroke is working out on a tropical island retreat when Joker and Punchline pay him a visit. They want to hire him, and at first, Deathstroke refuses. Then, Joker tells Deathstroke that Bruce Wayne is Batman and the fee for signing onto this job is Nightwing’s portion of the Wayne fortune. Deathstroke agrees.

As Deathstroke gets defeated by Batman in the main Batman book, he delivers an ominous threat before passing out.

Analysis: James Tynion IV wrote this story, and it’s no surprise, as this tale directly ties into what’s going on in the main Batman book right now. We finally get why Deathstroke is in Gotham. It’s not much of a surprise that the Joker is behind Deathstroke, but this reveal begs the question: is the Joker, then, also the Designer?

This whole time, we were led to believe that Deathstroke and his assassin pals were cogs in the Designer’s grand machination, but if Deathstroke is really working for the Joker, it’s not a stretch to assume that the Designer is just the Joker in a mask. It wouldn’t be the first time where the Joker hid his true identity.

This plot also feels similar to the Batman: Arkham Origins game, wherein the Joker pretended to be Black Mask for a good portion of the game. Deathstroke was one of the many assassins employed by “Black Mask” (Joker) to toy with Batman.

Either way, this was a fun reveal. It’s a nice nod that Joker used Deathstroke’s personal grudge against Nightwing (and the Teen Titans) to sell him on this idea of joining. This isn’t his true motivation, as Deathstroke’s opening comments to Batman suggest that he may switch teams later on, but it’s still a nice nod.

Final Thoughts: This collection of “secret files” is a mixed bag. Other than the Deathstroke story at the end, there’s not much new to be gleaned here that will have any lasting impact on the core Batman books.