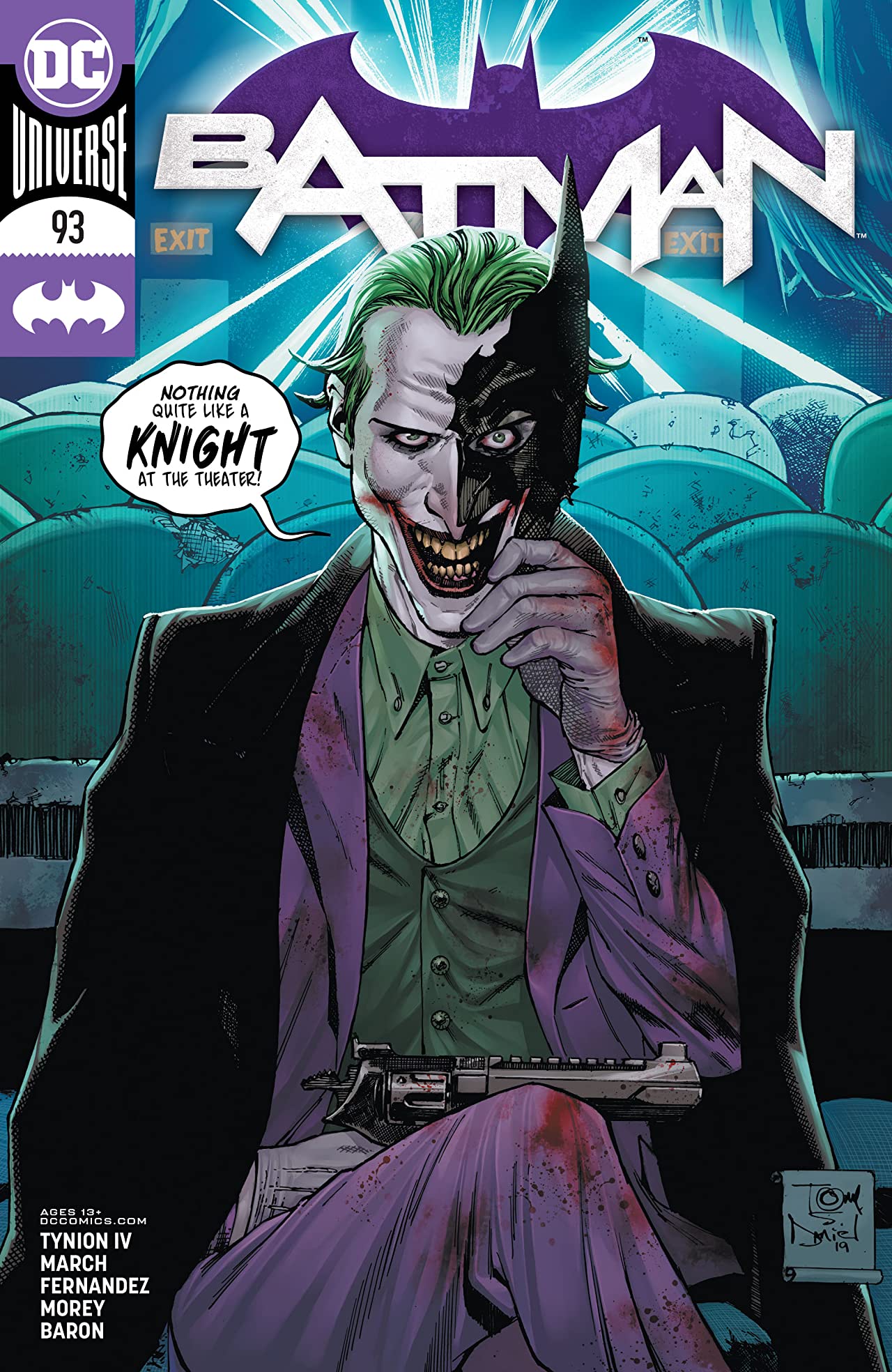 Overview: Batman and the Designer finally meet, and all of the Designer’s grand designs are finally laid bare.

“You want me to confirm what you have already deduced?” the Designer coolly replies. “No. How about you tell me, Batman?”

Batman then relates how five assassins were supposed to enter Gotham City and eliminate key city governmental positions, whereby Penguin would install his own goons in order to gain control of Gotham. The Riddler would then use his puzzle game to block off police districts and assume control of the police. Catwoman would rob Bruce Wayne and install a new bank for their criminal enterprise, and Joker would kill Batman and Robin. This would lead to an unstoppable criminal organization.

The Designer confirms Batman’s deduction and the two duel with swords.

Meanwhile, Catwoman sits at the Underbroker’s computer and begins making transactions from Bruce Wayne’s global accounts. Harley Quinn and Punchline fight in the other room. Punchline reveals that she has a grudge against Harley, that she blames Harley for trying to change Joker, thereby holding Joker back.

At Tricorner Yards, the Designer tells Batman that he’s missing a piece of the puzzle. Batman counters with information that proves he knows that this isn’t really the Designer. He lets this fake Designer know that the flaw in the original design was expecting the Joker to kill Batman. Batman pulls off the Designer’s mask to reveal another zombified corpse.

Batman asks Joker what he’s doing. Joker relays that this part of the plan wasn’t about breaking Batman. It was about breaking Catwoman. Suddenly, Deathstroke leaps to action and stabs Batman through the leg with a sword. Batman won’t die, but if he removes the sword, he may risk bleeding to death.

At the Underbroker’s place, Catwoman thinks she’s stolen all the money, but the Underbroker lets her know her account is actually empty. Punchline then shoots Catwoman in the head, thanking her for making her and Joker rich.

The issue ends with a phone call from Punchline to Joker, who is still very much drinking at that rooftop bar from a couple of issues back.

“Joker, you are now worth over one hundred billion dollars,” Punchline says. Joker laughs hysterically.

Analysis: There are many signals in this issue that indicate that Batman #93 wouldn’t work, that it shouldn’t work. Despite these signals, Batman #93 maintains the momentum of a several-issue juggling act that’s both astonishing and a tribute to the creative dynamic between James Tynion IV, Guillem March,  Javier Fernandez, Tomeu Morey, and David Baron. In this issue alone, we get several pages of backstory detailing the Designer’s plan, multiple surprise reveals, and several betrayals crammed back-to-back-to-back. And yet, we’re not fatigued, each surprise lands as intended, and even the long exposition at the beginning of the issue is interesting and insightful.

Much of the credit, of course, is due to Fernandez and March’s art. Their styles mesh well together, and they fill this issue with many glorious half and full-page spreads, and with clever paneling, they manage to give each reveal its due.

The fight scenes, though short, take advantage of the limited space and capture so much momentum in barely two or three pages. It’s incredible, and paired with the alternating coloring scheme we’ve become familiar with in this run so far, from the light and more pastel palette of the Underbroker’s lair to the intense detritus of green and orange of greater Gotham, Batman #93 is a feast for the eyes.

As mentioned earlier, this issue isn’t one that had any right to work with the way its story is structured. We start off with a lengthy exposition of the Designer’s original plan, and we’re taken through it step by step. It was a smart move by Tynion to note that this plan was intended for a much younger Batman, which helps skirt past whether or not Batman would be fooled by such a plot. It’s in these moments, as well, where Fernandez and March deliver some of this issue’s most exceptional art, weaving panels into each other to create mosaics that breathe life into Tynion’s exposition.

Right as the Designer and Batman begin to duel, we’re swept away in even more exposition, as Catwoman spends several pages explaining how Bruce Wayne’s finances work. Before we can tire of all of the accounting, we’re given a motive for the Punchline/Harley fight, and it holds up.

Punchline sees a purity in Joker’s madness that Harley diluted, and this fits with the profile of the twenty-something nihilist we’re introduced to in the Punchline origin in Batman: Secret Files #3. It comes across as a little juvenile, but Punchline is clearly a character who is juvenile and sophomoric in her thinking, a perfect hench girl groomed by the epitome of ultimate evil that Joker represents in Tynion’s run so far.

It’s at this point we’re given our biggest surprises, one right after the other. Batman learns that the Designer is really an animated corpse operated by Joker. If you read Batman: Secret Files #3, this isn’t much of a surprise, as that spoiler was all but spelled out. Then, we’re told that this whole time, the intended target at this juncture was really Catwoman. Joker tells Batman that Bruce needs to stay off the board just yet, at which point Deathstroke jams a sword through Batman’s leg. The juxtaposition of Joker drinking a margarita at a rooftop bar while Batman is brutally wounded intensifies the agony. The clash of black and orange against purple, green, and light blue adds to the sense of chaos as everything further spirals out of control. All that Batman has fought for and struggled against since Batman #86 has fallen apart.

Before we can catch our breath, Punchline shoots Catwoman in the head. There’s no visible blood, so it’s left to us to guess whether or not Catwoman is fatally injured or just unconscious. The more likely possibility is that she’s unconscious, as Selina still has a solo title with issues slated to come out.

Last note, if you haven’t seen the variant cover by Francesco Mattina, you are doing yourself a disservice. It’s incredible!

Final Thoughts: This issue represents the turning point to James Tynion’s Batman run thus far, and it appears to be our final barrier before we cross the bridge into Joker War.