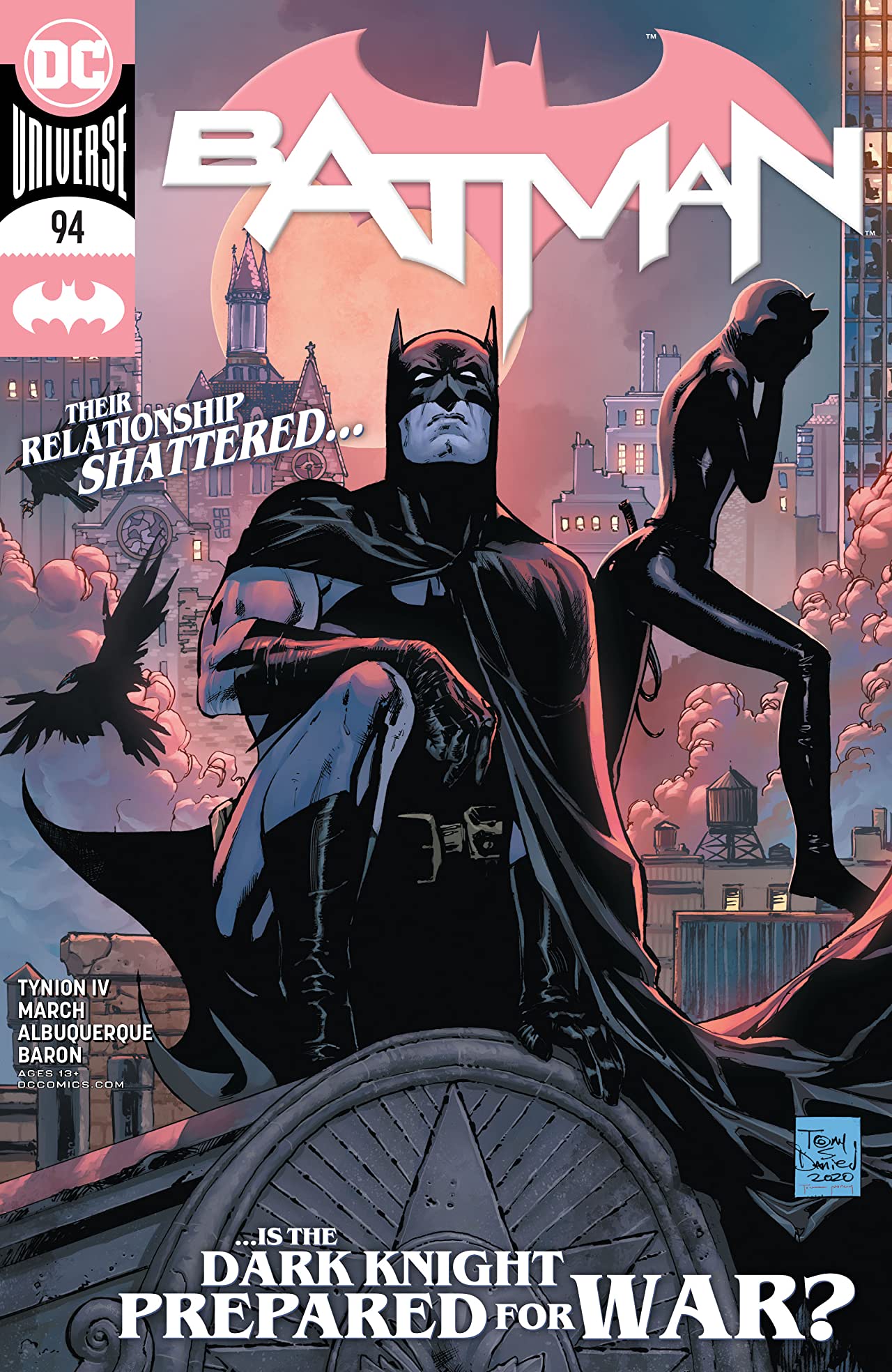 Overview: Joker has seized everything from both Batman and Bruce Wayne, and now Batman must correct his flaws in order to become a better Dark Knight.

Synopsis (spoilers ahead): Years ago, Bruce Wayne sits outside of a cafe sketching Gotham City. Through narration, we learn that while Alfred thinks these sketches are designs for a better Gotham, they’re actually nightmares Bruce has been drawing. With each incarnation, the skyscrapers grow larger and more frightening. These “dark designs” are a reflection of the monster Bruce needs to become in order to fight the evils in Gotham City.

An old man in a coat and hat trudges down the street, and Bruce gives chase. Bruce follows the man into his home, citing that he followed the man’s clues. The old man, Cassander Wycliffe Baker, brushes Mr. Wayne off. Cassander wants nothing to do with Bruce, citing that though he was once the world’s greatest detective, he disappeared because he was humiliated and outmatched by an arch-enemy. That arch-enemy was the Designer.

Bruce pleads with Cassander to train him. Cassander leads Bruce to a room of his own with walls covered in “dark design” drawings of Gotham City. He then informs Bruce that he’ll teach Bruce the most important lesson of all — how to lose.

In the present, Lucius Fox arrives to help a badly injured Batman. Lucius puts a compression band on Batman’s leg and tells him that he must go to a hospital. Batman stands up and says that the Joker stole the Wayne fortune. Lucius then points to a television broadcast, where lawyers have already begun seizing Wayne assets.

Lucius then tells Bruce that in order to protect Bruce’s company, Lucius needs to step down from helping Batman and focus completely on being a CEO. Once again, Lucius presses Batman to go to a hospital, citing that he would be cared for under a pseudonym. Lucius’ daughter would make certain that both Batman and Catwoman would get the treatment that they needed.

Batman demands to speak with Catwoman. At first, Lucius pushes against the idea but ultimately relents. Batman apologizes to a barely conscious Selina Kyle over the phone, telling her that this is all his fault. He tried to be someone he’s not, and in the process, he pushed everyone away. Batman confesses that Joker saw the cracks in this “design” and exploited them. Bruce tells Selina that he understands if she needs to leave, but he wishes she would stay.

At a private airfield away from Gotham City, the assassins load up onto their own private jet. Cheshire walks over to Deathstroke. He’s standing a few yards away, watching Gotham in the distance. She asks him what he’s doing, and he tells her that he’s taking one last look. “I don’t think any of us will be seeing this city again,” Deathstroke says.

At the hospital, Batman finds an empty, bloodied bed where Catwoman was moments before. Just then, Joker’s goons enter, noting that it was smart of Batman to get Catwoman away from them before they could collect her. One of the goons video chats Joker, who taunts Batman with everything the Clown Prince of Crime has taken away. Joker reveals that Punchline kidnapped Lucius Fox and that he has even more in store than just taking all of Batman’s stuff.

“I have a design for Gotham City. My own rebuild,” Joker says. “It starts right now. And you get to pay for it.” As Joker’s goons open fire on Batman, he leaps out of the hospital window.

Somewhere secret, Catwoman awakens in a luxurious bed. She’s been stripped down to her undergarments and covered with a silk blanket. Catwoman cries out for Batman, but Penguin informs her that he’s the wrong winged creature.

Oswald Cobblepot tells Selina that she was lifted from the hospital when the Joker’s goons started sweeping the floors. He then asks her about the Designer, and Selina tells Oswald that the Designer is dead and this is all Joker’s doing.

Somewhere in Gotham, Batman climbs atop a skyscraper. He’s deep in thought, reflecting on the dark designs he often sketched and how Alfred always envisioned him building a better Gotham. As he climbs, he asks Alfred for a signal. A giant red bat symbol lights up behind him as Batman promises to become a better Bat.

Analysis: This is a much slower issue than we’ve had during this entire first arc of James Tynion’s run, but the issue does its best to wrap up with a thematic idea. This whole time, the notion of “Dark Designs” seemed to be a play on this ancient plan that the Designer once concocted for Batman’s classic rogues. It was this unearthing of an old evil, of (quite literally) a skeleton buried beneath Gotham with the intent to clash against Batman’s grand designs for a better city.

In this final issue of the arc, we’re told that these “Dark Designs” have been Batman’s nightmares all along. The Designer was nothing more than a husk for the Joker to hide behind, and the true “Dark Designs” are the Batman himself — a monster crafted and sharpened by multiple teachers to combat a city that exists in Bruce’s nightmares. As Batman has evolved over the years, his designs for himself grew more intricate, and now it’s time for the final design, the final lesson learned from Cassander Wycliffe Baker. Joker has exploited all of Batman’s faults, and now it’s time for Batman to lose.

It’s an interesting idea, one that certainly expands on both the ever-changing modern-day criminal element of Gotham and Batman’s own origins simultaneously. It also carries a big promise with it in that it separates all of the Batman stories that came before as part of the older “Dark Designs,” whereas this upcoming Joker War will unleash a newer, more evolved Batman as we’ve never seen before. Or so we’ve been promised. It’s a bold statement, and writer James Tynion IV and the team have proven themselves up for the task.

This issue also sees Lucius Fox unceremoniously exiting as Batman’s new Alfred. Though this moment feels like one that demands some sort of emotional engagement with the reader, it comes across as just another end tied up before we dive into the Joker War. It’s a little disappointing, but there doesn’t seem to be much breathing room in letting subplots like this have enough space for emotional resonance.

Guillem March’s art, as always, is on point. His skew toward highlighting the more grizzled and horrific elements of Gotham continues to heighten the tension, uncertainty, and fear of the impending Joker War. March has easily become my favorite artist paired with Tynion in this current run, and I hope to see more of him. Rafael Albuquerque’s style, on the other hand, mostly pairs well with March’s, though there are a few moments where Batman seems to come across as more cartoonish in some panels, particularly in his facial expressions.

The biggest crime in this book, however, is with the cover. Francesco Mattina’s variant cover is absolutely gorgeous, as we’ve come to expect, but the main cover by Tony S. Daniel and Tomeu Morey comes across as false advertising. The main cover really zeroes in on this idea of Batman and Catwoman’s “shattered” relationship, but that’s not what this issue is about at all. Sure, both characters are in here, but this issue is about something entirely different than the Bat/Cat relationship that many readers have grown to either love or hate. It’s a shame, too, because the cover looks great, despite it having absolutely nothing to do with the contents of this issue.

Final Thoughts: Albeit much slower pace than we’ve come to expect from this title as of late, Batman #94 wraps up the Dark Designs arc with a nice, thematic bow before we head into Joker War.