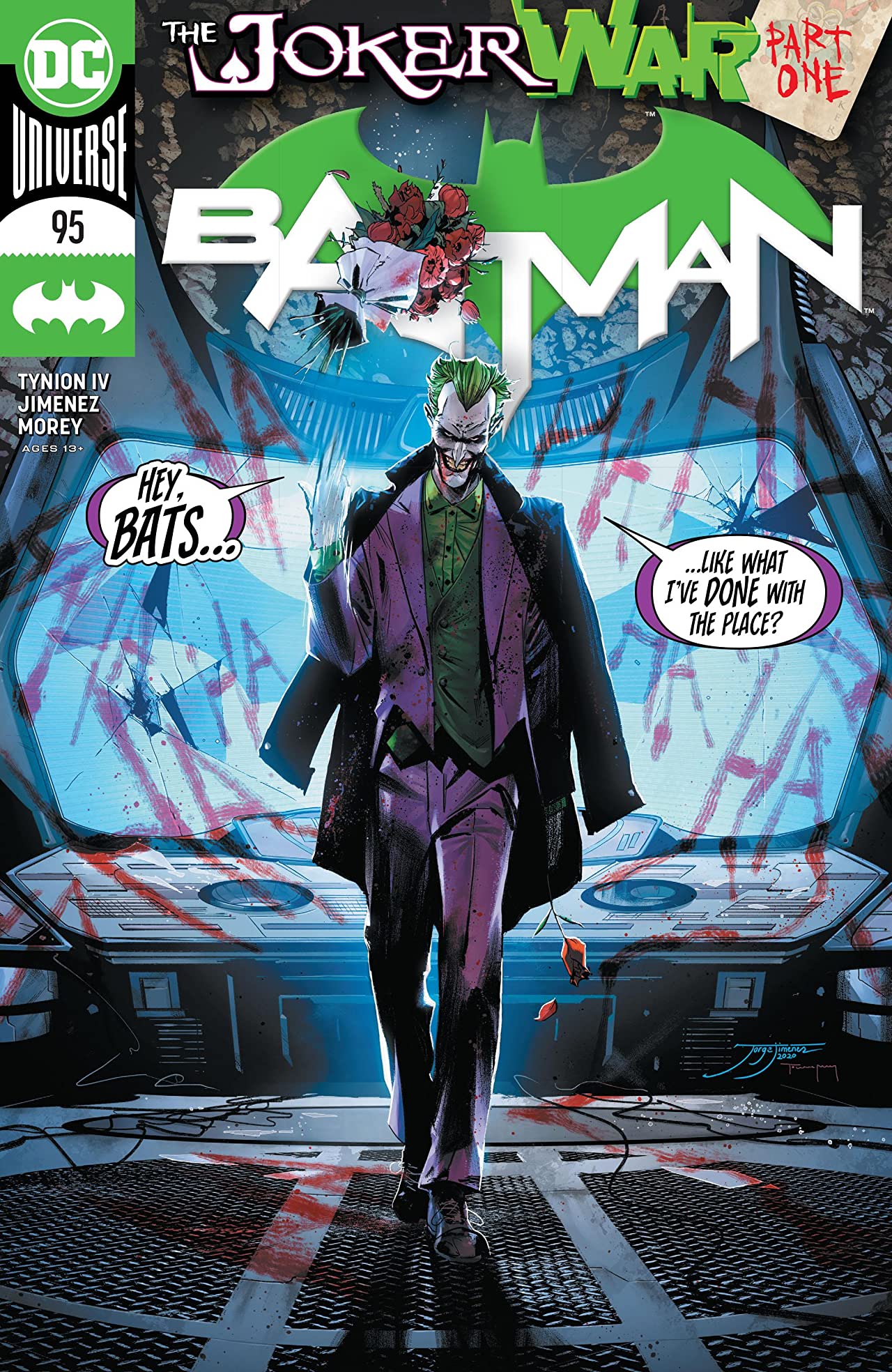 Overview: As Joker seizes control of Gotham, Batman struggles to survive, looking for a cave where he can regroup and reclaim his lost city.

Synopsis (spoilers ahead): Years ago, Batman drives the Batmobile to the Gotham City reservoir, where he is to encounter Joker for the first time. On the way, he talks with Alfred, expressing his reservations about this caper. To Batman, the Joker is no ordinary murderer. Batman realizes that the Joker sees everyone but Batman as meat, and he feels that the Joker is already orchestrating more encounters between the two of them. Alfred reassures Batman, telling Bruce that he won’t have to fight any murderous nightmare clowns alone.

In the present, the Batmobile bursts through the Gotham City aqueducts, pursued by a few cars full of Joker’s henchmen. News broadcasts tell us that “someone” (Joker) has taken control of everything belonging to Bruce and that Wayne Enterprises belongs to a new board of directors. Legal counsel for this new board of directors will be provided by Harlan Graves, a man whose reputation precedes him. We also learn that Bruce Wayne is missing and that the Gotham Gazette has been issued a cease and desist for publishing an editorial explaining that the Joker is behind everything.

In the aqueducts, the Joker’s henchmen blow up the Batmobile with a bazooka. As it burns, one of them calls Punchline to inform her that they’ve destroyed yet another Batmobile with no Batman inside.

At Wayne Enterprises, Punchline asks a jokerized Lucius Fox what the name of this secret Batman base was at the TriCorner Yards Campus. It’s called the Hibernaculum, which is where bats breed.

In Park Row, the former owner of the Monarch Theater leads the new owner, Joker, around his recent purchase. The previous owner tells Joker about how Bruce Wayne tried to buy this theater. He turned Wayne down, but he simply couldn’t pass up the Joker’s generous offer. He also mentions hearing voices downstairs while Joker rummages through old films. At first, Joker says that it’s the wind. When Joker finds the movie he’s looking for, The Mark of Zorro, he tells the old owner to join the audience downstairs. The theater is packed with jokerized victims laughing at an empty screen.

Outside of the Tricorner Yards Campus of Wayne Enterprises, a police blockade is set up. A car pulls up, and a man in a red suit walks out to greet Commissioner Harvey Bullock. This man, Harlan Graves, tells Bullock that he’s filed a civil rights injunction to stop the police harassment of Wayne Enterprises’ new owners. Bullock and Graves argue until Graves leaves. As Graves’ car speeds through the barricade, another officer informs Bullock that the police are losing this battle.

Inside Wayne Enterprises, Harlan Graves pulls out a mask and puts it on. He’s the Underbroker, and he’s here to help manage Joker’s investments. He informs members of the board to purchase every movie theater in Gotham City, per The Joker’s demands.

Outside of the Tricorner Yards Campus, Batman is listening in. He scans the building, noting that it’s littered with armed goons before finding a suitable location to break into. Batman enters one of his micro caves in the building, but before he can activate the computer, Punchline assaults him.

Punchline tells Batman that Lucius gave up all of the locations of his six hidden Batcaves in this building. As the two fight, Punchline chides Batman for the prototype Batsuit in this particular, unused mini cave. Batman hadn’t seen the design yet. It was a prototype Lucius was working on, a brighter, more luminous blue Batsuit meant for a more hopeful Batman in years to come.

Before Batman can gain the upper hand, his vision blurs. This mini cave has been dosed with a special blend of toxin that combines venom, fear toxin, and Joker toxin. Batman flees, and as he’s running, he can hear Alfred telling him that he’s running the wrong way.

Outside, a Batplane is headed straight for the building, and it’s opening fire. Batman hears Alfred telling him that he needs to get out. A poisoned Batman stares in disbelief as the Batplane’s weapons fire on the Wayne Enterprises building. “We’re all dead now,” Alfred says.

Analysis: It feels like we’ve been enduring months and months of advertising in anticipation of this arc, but finally, the Joker War is here. If you’ve been following the issues leading up to this arc, little has progressed from the last issue to this one. If not, this issue does a pretty good job of setting the stage for the war.

Joker owns everything that once belonged to Bruce Wayne — Wayne Manor, Wayne Enterprises, every Batcave, and all of his Bat toys. In this issue, he’s purchased the Monarch Theater and has plans to buy every movie theater in Gotham.

Batman, too, is much like how we last left him. He’s broken, badly wounded, and on the run. This issue introduces Punchline’s special chemical cocktail, which makes Batman hallucinate. Going forward, we won’t be able to trust what Batman sees, hears, or says.

Writer James Tynion IV devotes quite a bit of space in explaining how things work in this first issue of the arc. We know how Joker is able to get away with controlling everything. We know why there aren’t any news outlets publishing editorials or stories explaining what’s happened. We even learn why the Gotham City Police are rendered more or less neutralized in this whole affair. It seems the Underbroker moonlights as a man named Harlan Graves, and his penchant for villainous bureaucracy has brought the defenders of Gotham to a screeching halt.

It’s an interesting idea, and depending on how you feel about the explanations provided, this may make Joker War an easier sell. At the very least, it’s certainly an attempt to explain the setting, so Tynion and artist Jorge Jimenez can move on and focus on the more important task of telling a great story.

Though this first issue is filled to the brim with exposition, there are some fun moments. At the very beginning, we get a direct reference to The Man Who Laughs, a Batman story that reworked Joker and Batman’s first meeting at the Gotham City reservoir. There seems to be some kind of foreshadowing here, however, in that Tynion and Jimenez make it a point to have Alfred tell Batman that he won’t have to fight the Joker alone. By the issue’s end, as noted in the synopsis, we’re teased with a potential return of Alfred. Of course, this could all be Batman’s toxin-fueled hallucinations. Whether real or imagined, Alfred Pennyworth will most likely make an appearance soon.

During the Punchline/Batman fight, we’re given a glimpse of a new prototype Batsuit that Lucius has been working on. It’s extremely luminous and sleek, and one would imagine it would make Batman too easy to spot in the dark. At the moment, this suit seems to be a representation for the Gotham that could have been, rather than the perversion Joker’s turning it into. It seems unlikely that we’ll see this suit in action, especially if you consider Tynion’s recent comments on Twitter.

One other highlight of this issue was with Joker in the Monarch Theater. The movie he was looking for was The Mark of Zorro, which is the classic film that inspired Bruce when he was but a small boy. The reference is neat, but it makes one wonder… is there anything about Batman that The Joker doesn’t know? I can’t say I’m keen on Joker knowing this detail, as it seems to imply a little too much omniscience for the Clown Prince of Crime.

Minor gripe aside, the real star of this issue was Jorge Jimenez’s art. It’s absolutely fantastic and even a little terrifying. His jokerized Lucius Fox is nightmare-worthy. Particularly of note, when Joker is touring the Monarch Theater, the way Jimenez plays with shadows is admirable and feels like something straight out of a moody Noir film. At the moment before Joker finds The Mark of Zorro, the way Jimenez lays out his paneling is so eerie and rife with tension. It perfectly captures both the horror of Joker and the seediness of Gotham’s criminal underbelly in a way that words can’t describe, and it’s honestly one of the more unsettling pages of Batman I’ve seen in quite a while.

Tomeu Morey’s coloring, once again, accentuates the grotesque depiction of this Gotham in all the right ways. I mention Jimenez’s art, but Morey’s splashes of vivid and vibrant coloring cultivate the aforementioned nightmare vision of Lucius Fox into the scary visage that will forever be etched into my brain.

Final Thoughts: Joker War starts off with plenty of exposition and quite the FAQ page full of answers to sell this idea, but boy is this issue absolutely gorgeous!