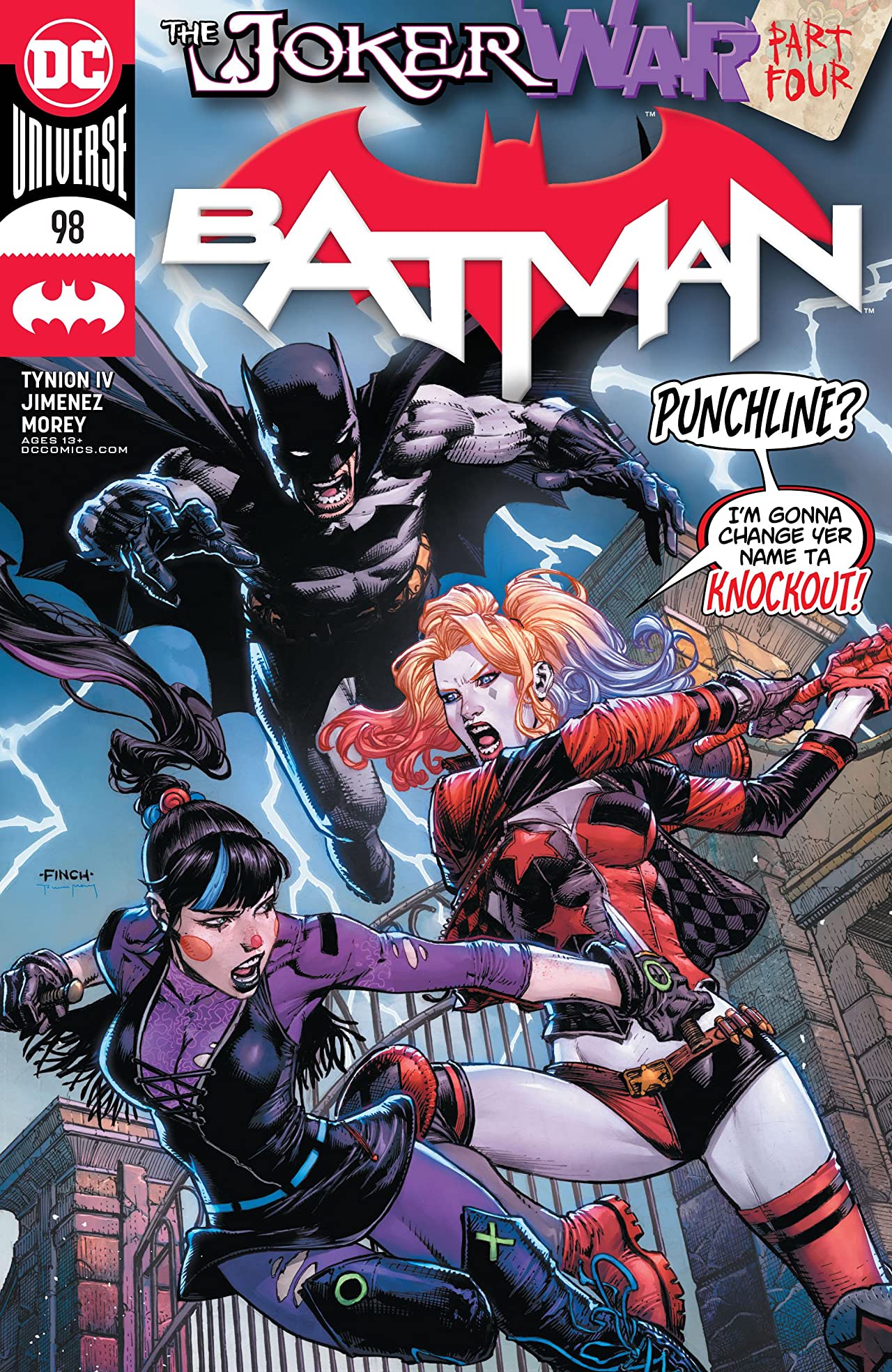 Overview: Harley Quinn and Punchline duel once more while Batman explores the deep recesses of his own mind.

Synopsis (spoilers ahead): At Penguin’s exclusive hideout known as “The Cool Room” (remember that from Batman #94?), Scarecrow and Riddler play a game of chess. During the game, Scarecrow keeps telling Riddler that Riddler is afraid and picturing himself in a game against Batman. When Riddler counters, Scarecrow doubles down on his psychological assessment. Riddler responds by tossing the board over and leaping for Scarecrow’s throat.

Oswald Cobblepot watches from afar, musing that he wishes he would have put money on how quickly Riddler would overturn the board. Catwoman joins Cobblepot. Oswald tells her that Riddler helped set up a bingo board where villains can place bets on where Joker’s henchmen will set fires next in Gotham. Catwoman’s mind is elsewhere, and she lets Oswald know that this is all her fault. Oswald agrees.

“You gave him [the Joker] the money to win his war,” Oswald says. Penguin then tells Selina Kyle that Batman appears to have been taken off the board.

In the Batcave, Batman forges a batarang and shows it off to Alfred. Alfred notes that Batman is going to need more compartments in his utility belt.

“Every compartment and canister can save a life. At least one life,” Bruce Wayne says as Alfred holds up a utility belt. “And it’s just the beginning.”

Alfred informs Bruce that part of him is looking for this kind of idealism and optimism again, that Batman wants to be this best version of himself once more. When Bruce says that he doesn’t understand, Alfred reminds Bruce that he has the keenest mind of any man.

That’s when Batman realizes that this is a dream induced by the tea that Harley Quinn gave him last issue.

“Now, if we’re going to have some tea, let’s do it properly,” Alfred says, escorting Bruce up the stairs toward Wayne Manor.

In Poison Ivy’s hidden garden, Harley Quinn stands guard over an unconscious Batman. She calls out for Ivy to show up and help, but another voice answers. It’s Punchline.

In Bruce’s mind, Alfred pours Master Bruce a cup of Darjeeling tea. It’s the kind of tea Alfred used to pour Bruce on the direst and most difficult of cases. Bruce notes that he tried making it after Alfred passed away, but he couldn’t get the taste right. The two talk about how wartorn and horrible Gotham City is under the Joker’s clutches. Alfred reaffirms that to the Joker, there are only two people in the world: Batman and Joker. To Batman, Alfred implies, each life is as important as the next.

Meanwhile, Harley carries Batman on her back as Punchline incinerates the garden behind the two of them. Harley gets Batman to safety and then fights back. As the two clash, Punchline mocks Harley’s origin, calling her a means to an end for Joker to escape Arkham Asylum.

When Harley asks Punchline who she thinks she is, Punchline responds with her own origin about believing in the Joker and proving to him that she sees the world as he does.

“I thought Mr. J had a heart. You think he has a brain,” Harley says. “But he’s not doing this for any of the reasons you think he is. He doesn’t believe in anything. He’s a manipulator. He’s manipulating you.”

Harley pummels Punchline on the ground, telling her that Joker only cares about Batman. Punchline punches herself free and flees from Harley, resolved to prove Harley wrong by killing Batman once and for all.

At Wayne Manor, Alfred sits Batman down and tells him that his original dream of saving every person was a child’s dream and that in the process of Bruce trying to save his parents and Alfred, Bruce has inadvertently pushed away those closest to him. When Batman admits that he’s failed, Alfred slaps him and screams at him to accept the world he lives in and accept what he can control instead of what he can’t. As far as Alfred is concerned, every life Batman can save is a victory against death.

Batman wakes up just in time to confront Punchline. Punchline is taken aback, confused that Batman has awoken and purged himself of her toxin. Batman takes down Punchline, then sends out a call to the rest of the family.

At “The Cool Room,” Selina enlists Penguin and Riddler to join her as she heads back out to Gotham City. They refuse at first until Catwoman promises to make them billionaires.

Analysis: Once again, artist Jorge Jimenez delivers incredible art that continues to be the highlight of this Joker War event. Of note, the scenes between Batman and Alfred in this issue are moving, mainly due to the art. Jimenez does a fantastic job of layering the expressiveness in closeups of Alfred’s face. We see the pain, the judgment, and the sorrow that this dream version of Alfred carries with him. Jimenez makes it a point to place Alfred above Batman in most of their scenes together, towering above the hero like a father to a son. This type of imagery and careful layout heightens what is otherwise an underwhelming script that we’ve seen time and time again in Batman comics as of late, particularly when it comes to Batman’s relationship with Alfred.

Colorist Tomeu Morey’s work, in turn, continues to exemplify the tone set by Jimenez. Near the end of their talk, Morey creates an increasingly glowing light radiating from behind Alfred, which reaches a radiance that nearly overtakes the final panel with his parting words to Bruce. It’s beautiful and heightens the emotional impact that the creative team is going for in this issue.

On the flip side, the emotional moments are offset by the vicious brawl between Harley Quinn and Punchline. This fight is absolutely spectacular, with the latter half of the battle unleashing brutality from Harley that’s a sight to behold. The way that Jimenez captures this rage in off-kilter panels makes the most of limited space, and as readers, we feel the impact of each punch and kick. If anything, this fight is only off-balanced by the dialogue. Punchline speaks to her age in this fight scene, as her words come across as childish and full of irrational rage. For a character so self-assured of her own intelligence, she’s a bit of a dummy, especially in an issue where everyone but her knows that Joker only cares about Batman.

This issue culminates in Batman’s return. Arguably the most exciting panel is nearly a full-page spread of Batman, with his cape extended, shouting his own name. It sounds silly, but it totally works. The word “Batman” is written across his darkened cape in big, bold letters. That radiance emanating from behind Alfred glows behind Batman here, telling us that we’re seeing a return to form for our Dark Knight, that Batman is healed and ready to get back in the fight.

The road to this moment has been a long one, but it really feels like writer James Tynion IV and the team have set us down a path of not only telling us a Joker story, but of bringing us a Batman that’s more of a hero aligned with hope and inspiration than the moody, emotionally broken Batman we saw under comic scribe Tom King. This is a good thing, and it’s a Batman that many fans have waited years to see again.

Final Thoughts: The creative team behind this Batman run is setting the final pieces in place to bring back an inspiring Batman that we’ve sorely missed in these last few years, and that’s reason enough to celebrate.