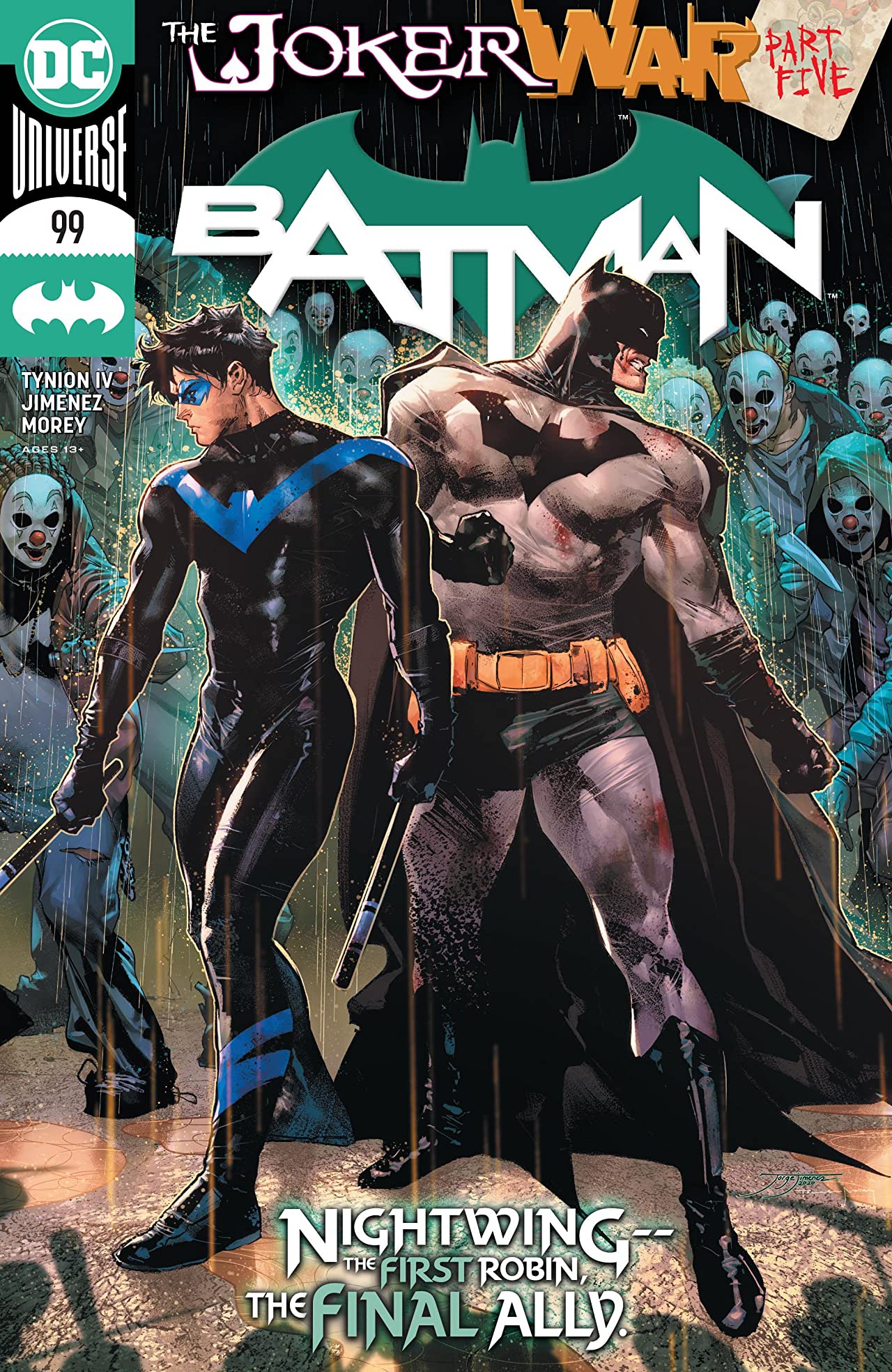 Overview: Joker sets the stage for the grand finale to his Joker War while Batman reassembles the Bat-Family.

Synopsis (spoilers ahead): In a parking garage in Gotham Midtown, the Joker carries a bag to his newly upgraded Joker limo. The Joker hops in, orders the driver to take him to Ace Chemical, and the two chat. When Joker finds out that his driver, Abe, has lived in Gotham all of his life, Joker muses that seeing the city like this must be nice. Mr. J then proselytizes about how the city is waking up, how Gotham is freeing itself from the childish fantasy of Batman that has shackled it for years.

When Joker arrives at Ace Chemicals, Punchline calls to inform her boss that both Batman and Harley Quinn are loose. While Joker walks through Ace Chemicals killing every single one of his henchmen, he tells Punchline that this only means that they’re ready for the final act. Mr. J then gives the order to fill up the theaters, as well as put a bounty out decreeing that he’ll pay $1,000 a head for every dead body brought to him.

Meanwhile, Batman meets with Red Hood, Dick Grayson, Signal, Orphan, Batgirl, Spoiler, Red Robin, and Harley Quinn on a rooftop. He apologizes for having pushed the family away for so long, and he asks that they all work together to take back Gotham City from the Joker. The team disperses, with Batgirl heading to the Clock Tower to coordinate efforts from there. Before Dick Grayson leaves, Batman tells Dick that he’s grateful to see him again. Bruce then offers Dick his old Nightwing uniform, as Dick wasn’t wearing it.

Outside the office of Graves, Willock, and Crain, the legitimate front for The Underbroker, Catwoman, Riddler, and Penguin prepare to pull a heist that will steal back Joker’s fortune.

Batman arrives at Ace Chemicals. As he’s walking into the chemical plant, Harley grazes him with a bullet. The two exchange words, with Harley telling Batman that she means it when she says she’s going to put down the Joker for good. After their words, Batman leaves a sobbing Harley behind, heading into Ace Chemicals alone.

Inside the plant, Joker surprises Batman with the reanimated corpse of Alfred. Before Batman can react, Joker gets the jump on Batman. Dressed in a Jokerized Batman suit himself, Mr. J taunts his foe.

Analysis: There is an abundance of great ideas and themes running throughout James Tynion IV and Jorge Jimenez’s Joker War event. Throughout the lead-up to the event and over the course of the last few issues, we’ve been privy to a thoughtful discourse on what it means to be Batman, how Batman has been dishonest with himself, and how he’s trying to be something he’s not, among other things. The creative theme has also done a wonderful job of framing these issues where we’re confronted with two polar opposites interwoven with each other in such a way that it flows like poetry. For example, during an issue that heavily featured Joker and Punchline, the parallel narrative gave us Batman and Harley Quinn. In this current issue, we are presented with a scene of Joker commanding his troops set against a scene of Batman bringing the family back together and ordering them out into the field.

Joker War is layered like a chess match, and the creative team should be commended for the thoughtfulness and effort into crafting it this way. It’s beautifully put together, and Jimenez’s art with Tomeu Morey’s coloring consistently make this layering both shine and stand out from each other, often with contrasting color palettes. Clayton Cowles’ lettering amplifies the dichotomy, with Joker’s lettering off-kilter while Batman’s is clear and level.

BUT — and there’s a big but — there’s one major problem that has been plaguing this arc since the beginning. Batman #99 is part five of the Joker War. We’re nearing the end of this arc, but as a reader, you wouldn’t know it without being told so explicitly in the dialogue. There’s no tension. There’s very little action. Pieces are moved around the chessboard, and characters proselytize about how they view Batman, Gotham, etc. Yet, there’s nothing that demands readers turn the page. There’s no mystery, worry, or concern that compels us to see this through the end.

Batman was indisposed into dreamland for a bit, but now he’s fine. Joker has had control of Gotham City from the beginning and spent most of his “war” lounging by the pool like an emperor in a malaise. Catwoman, after having spent a few issues in the Cool Room, is up to something with Penguin and Riddler, but we see so little of her, it matters not. Truly, our two driving figures of the narrative throughout this event have been Harley and Punchline, and these two characters are sidelined when the orchestrators of this chess match demand its kings come back into focus.

When our king pieces are on the board, instead of tension, Tynion heaves essays and analyses regarding Batman, Gotham, or the Joker upon us. These essays are interesting, sure, but they’re not compelling any sort of narrative forward. There’s no drive to care or continue with this story, and one wonders how much more interesting Joker War would have been with Harley and Punchline consistently as the two central focal points of this story.

Final Thoughts: More than half of what should be rising action leading into Joker War’s finale is devoted to Joker and Batman delivering speeches. The art is beautiful, but there’s no tension to compel us forward.