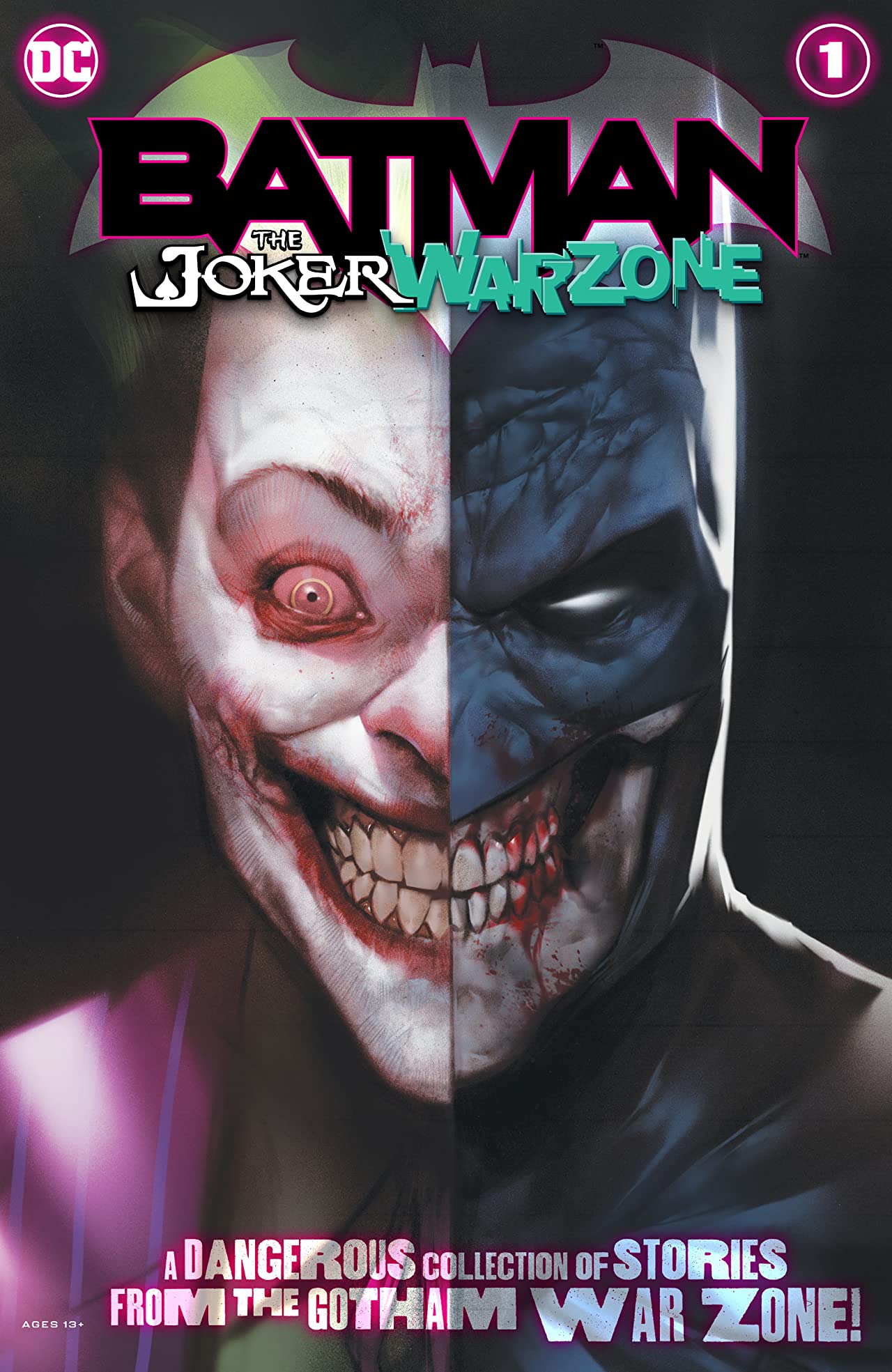 Overview: Five tales show different stories in Gotham once it’s been turned into a War Zone by the Joker.

In Arkham Asylum, Bane hears the news of the Joker War as his body is drained of venom by machine. Joker kills his way into Bane’s cell, threatening to kill Bane as a joke, and berates the incarcerated villain for failing to kill Batman and wasting Alfred’s death. Joker leaves after putting Bane’s mask on the villain’s face mockingly, and Bane waits.

Home safe after Batwoman and Batman rescued him, Lucius Fox struggles to free himself of the Joker toxin, as his family debates what to do with the money that Catwoman gave them (in Catwoman #25). Lucius attempts to join the heated discussion, but their house is run into by an army of Joker clowns. Luke suits up as Batwing to fight them off, until Lucius starts shooting them in the head with a pistol, forcing Luke to fly off. The police arrive and scared of his Joker toxin appearance, they almost shoot Lucius, until Luke walks back (having ditched the Batwing armor), and persuades them to let Lucius go. Lucius’ wife says that they need their son Tim back.

The villain Hench Master crows about his service of providing henchmen as he and his gang attack a storage facility when Spoiler and Orphan attack on Spoiler’s bike! An hour earlier in Bludhaven, Stephanie Brown explains to Cassandra Cain what the Joker War means and suggests that despite her tension with Batman, Gotham needs the signal in the sky. The girls plan to beat Hench Master and steal Steph’s father’s (the Cluemaster) signal. Steph works at opening the storage unit while Cass holds off the gang. Hench Master monologues about how he and Batman are the same, treating people as weapons to be used – but Steph uses his attack to break through the door. Unfortunately, Cluemaster’s signal is broken already, so Cass has an idea – they will wear the signal themselves.

Poison Ivy walks into her underground garden that Harley Quinn took Batman to in Batman #98 but finds many clowns who followed Punchline in. She burns them all, except for one female clown who comes to the garden late and who reminds Ivy of Harley. Outraged at the wars and destruction, Ivy calls herself “Queen Ivy” and sends out roots beneath the city on a massive scale.

The Joker tells a team of clowns – Snap, Crackle, Pop, and Big Ed, to take out Clownhunter in the Narrows. The crew find spike strips, and dead clowns – but also lose one of their numbers to a booby trap. Another falls when they flame-throw a dummy and hit fuel tanks. A third is killed by Clownhunter’s sniper shot, then Big Ed, the last clown standing, faces off against the young vigilante. After a brutal battle, in which both are unmasked, Clownhunter kills Big Ed with a batarang-bat club to the head, to the cheers of the Narrows.

Analysis: To begin, this is the best Secret Files issue that DC has published, even though it’s not titled Secret Files. The last three Batman: Secret Files haven’t revealed anything secret about the characters involved, and unlike many of those titles of yore, they didn’t even tell stories that filled in the gaps in the event that they were attached to (though the recent Death Metal Guidebook was an excellent exception to this trend). The title “The Joker War Zone” cleverly riffs off of classic comic titles like “Punisher: War Zone” or “Civil War: Front Lines.” We get insight into the characters impacted by the war, and we see the consequences overwhelming Gotham City.

The four writers turn in solid work, though none of the stories truly stands out as a writing gem. The art really shines, though – Guillem March provides horror and power in his story of Bane vs. Joker, Olivier Coipel brings strong lines and a realistic style to the story of the Fox family, David Lafuente renders Stephanie Brown and Cassandra Cain with infectious energy, Laura Braga draws a Poison Ivy in rage and beauty, and James Stokoe provides disturbingly cartoonish takes on extreme violence.

The most interesting thing about each of these five stories is their forward-looking nature. Bane vs. Joker will clearly play a big role in Tynion’s plans for Batman next year, possibly in the main Batman title, possibly in a spinoff miniseries (Arkham War or something?); we all know about John Ridley’s Fox family Batman miniseries with Nick Derington, rumblings that DC will finally give Stephanie Brown and Cassandra Cain exciting things to do next year, a strong hint that Poison Ivy will feature as an antagonist for Batman soon, and, of course, the continuing saga of Clownhunter both in the ongoing Batman story, and in Batman Annual #5, also created by Tynion and Stokoe. Most of the stories are more teasers than actual short stories – “The Symbol” and “Clown Hunt” are the only two that have a beginning, middle, and end, while the others set up an interesting situation for future exploration. Despite this “teaser” nature, the excitement generated by each of these five pieces should fuel strong stories in Gotham for the next year – hopefully with the support of the editors and fans!

The main Ben Oliver cover provides a haunting Batman and Joker split-face composition, while Derrick Chew’s digital painting variant highlights the young characters of Clownhunter, Stephanie Brown, and Cassandra Cain. The Joker War Zone branding through the font is quite nicely done, similar to the “Collateral Damage” branding used on the tie-in issues.

Final Thoughts: A series of intriguing teases of what’s coming next, as well as a fun tie-in to what’s happening now.