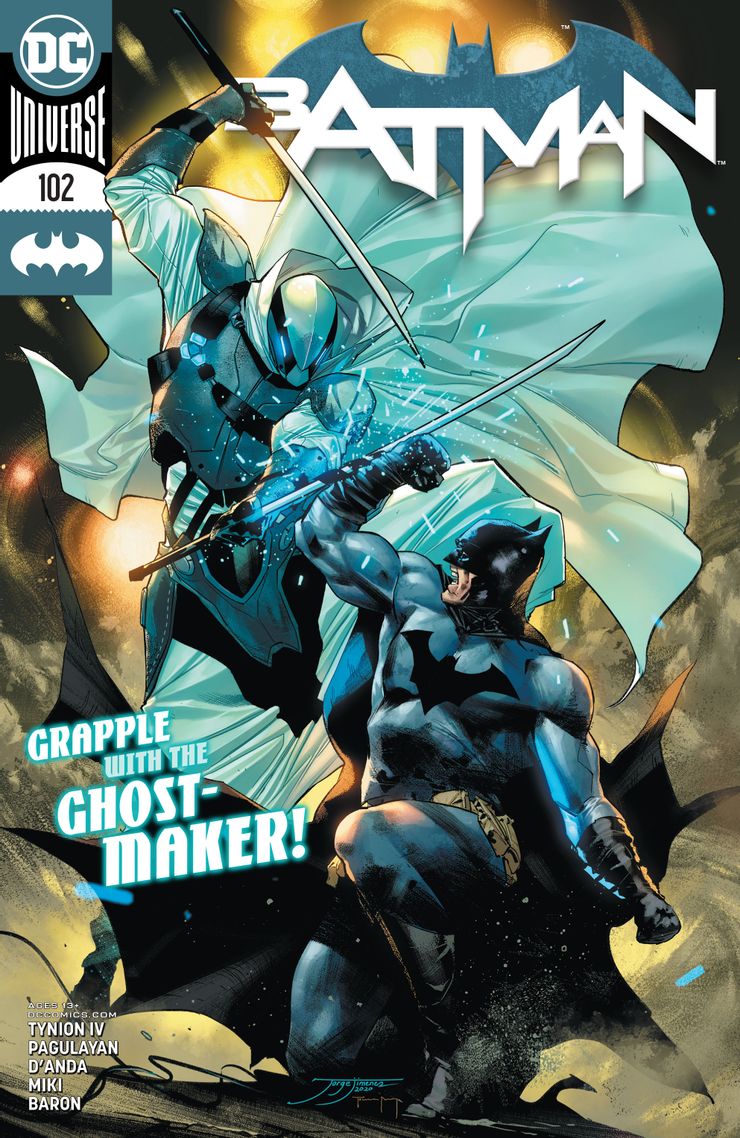 Overview: Batman and Ghost-Maker’s past leads to their present violent confrontation in the aftermath of Joker War.

Synopsis (spoilers ahead): Ghost-Maker tortures police officers in a skyscraper construction zone to find the location of Clownhunter. Meanwhile, Batman investigates a high concentration of “grinners”, long term repeated Joker henchmen, with Oracle’s help on comms and surveillance. Batman realizes that Ghost-Maker is sending a message with a pile of dead clown henchmen, and tells Oracle he has to deal with this problem alone because it’s personal.

Many years ago, in Ireland, a young Bruce Wayne demands that a Dublin knife fighter teach him – but a young Ghost-Maker, having already killed their shared former master in Morocco, forces Bruce into deadly combat for their next teacher, and seems to be winning.

In Little Santa Prisca, Harley Quinn bargains for a new apartment, as Clownhunter watches, planning to kill her. However, Ghost-Maker attacks Clownhunter, who is only saved when Batman arrives. Ghost-Maker challenges Batman to another sadistic trial by combat – but this time, for all of Gotham City.

Though Tynion falls into a few unfortunate habits, like Batman shutting out his allies (in this case, Oracle) when he finds something that is personal to him (seems like he’s not learning how to be alone without being solitary very well, despite his promise last issue), the use of Oracle is very enjoyable (if a bit Babs-girl exposition), promising a build towards a new status quo with the Batgirl characters, as Stephanie and Cassandra are name-checked in her conversation with Batman. The idea of another teacher from Bruce’s worldwide travels is old ground, but Tynion gives it energy with another well worn Batman figure, the rival of youth (see also Morgan Ducard from Tomasi’s Batman and Robin). The details like the “grinners”, the construction all over Gotham, and the voicing of Harley, Batman, Barbara, and Clownhunter provide a lot of enjoyable character beats. All in all, the ingredients for a great Tynion story are all here – let’s hope that freed from the intense shackles of providing a “big Bat event” that doesn’t upset the status quo, Tynion’s able to pull off his better work as seen in Detective Comics two years ago.

Our main cover by Ghost-Maker designer Jorge Jimenez showcases his gorgeous take on both Batman and the new villain, as does his incentive variant featuring his design sketches of the character. Francesco Mattina’s digital painting cardstock variant showcases Ghost-Maker in the too-solid armor and sword, emerging from the shadows with terrifying glowing eyes. All three give readers the chance to collect Ghost-Maker in his glory after the tease of Batman #100.