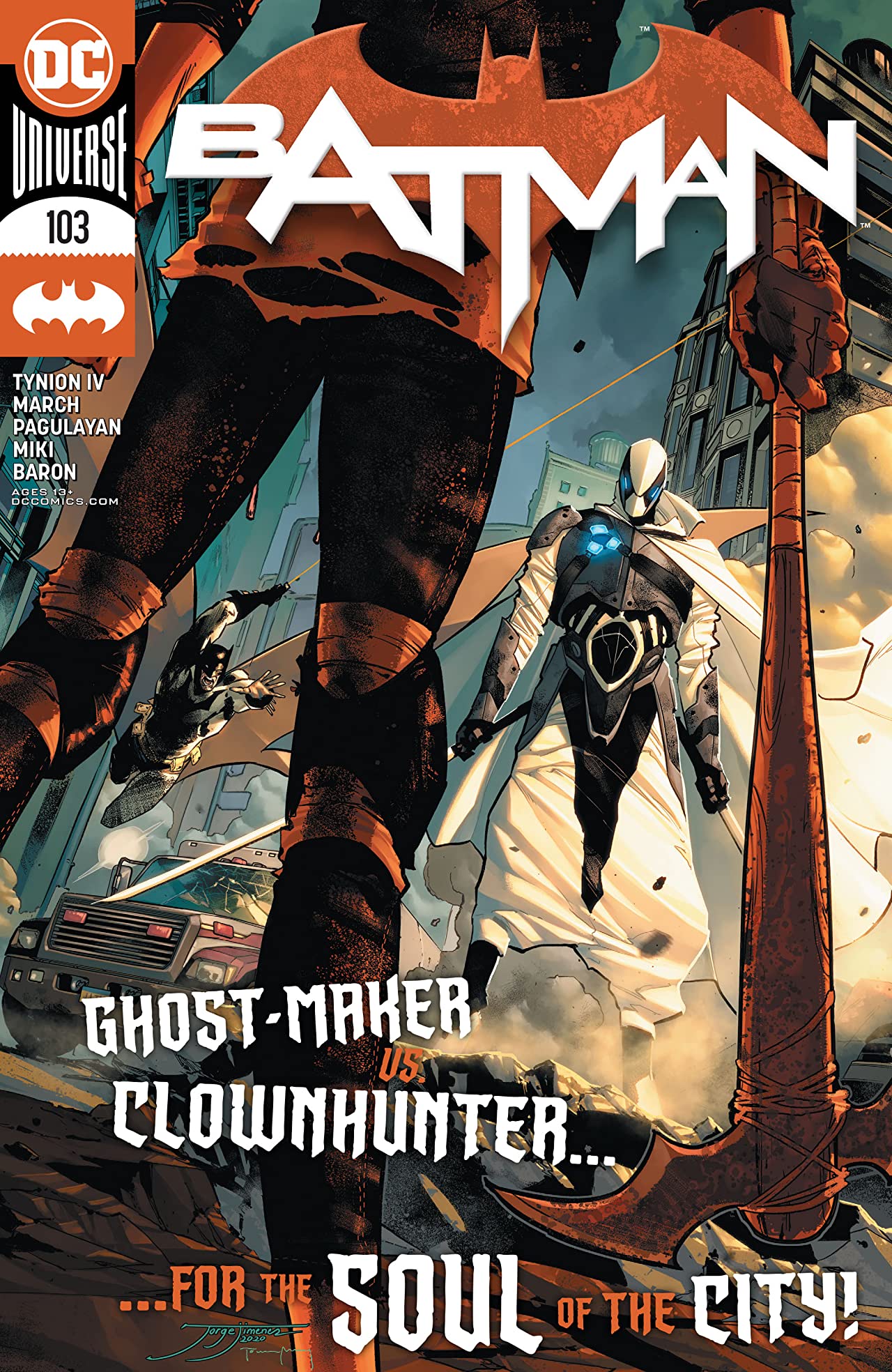 Overview: Batman and Ghost-Maker battle for the fate of Clownhunter.

Synopsis (spoilers ahead): Years ago, in the Gobi Desert, a young Bruce Wayne is meditating in the sand beneath the stars. He is interrupted by a young Ghost-Maker, who has come to spar with him. The two argue, with Bruce revealing that he doesn’t want to fight because it’s the anniversary of his parents’ murder. Ghost-Maker tells Bruce that his emotions make him weak and that he is doomed to fail eventually. Bruce picks up a sword and assumes a fighting stance, telling Ghost-Maker that he’s going to prove that emotions don’t make one weak.

In the present, Batman battles Ghost-Maker atop the buildings of Gotham City. In Bruce’s ear, Oracle says that she can’t hear Ghost-Maker’s voice, nor can she see him from any angle. Batman tells her that she needs to stop trying, that Ghost-Maker’s Ghost-Net will wreak havoc on her computers. According to Bruce, this is exactly how Ghost-Maker plays it, unknown and untraceable.

Ghost-Maker taunts Batman, telling him that he solved a serial murder case, leaked information leading to the arrest of fourteen corrupt district judges, and informed the FBI of six incoming shipments of heavy artillery from Santa Prisca, all before he left his plane into Gotham City. He chides Batman for protecting Clownhunter, who stands nearby and is taken aback by the sight of the two fighting.

Batman tells Clownhunter to run just as Ghost-Maker leaps towards the clown-killing vigilante. Before Ghost-Maker can catch Clownhunter, Batman grabs the would-be assassin by the cape, allowing Clownhunter to escape. Ghost-Maker tells Batman that he’s going to shock Bruce into realizing how wrong he’s been.

Meanwhile, in an apartment overlooking the city, Harley Quinn talks to a poison ivy plant that she rescued. She tells it, and through the plant her friend Poison Ivy, all of the things that have been happening lately. Harley reveals how she feels adrift in finally not having someone ordering her around, but she wants to help people. She tells the plant that she misses Ivy and that she’s always hoping Ivy will show up again.

After Harley kisses the plant, Clownhunter shows up and takes a swing at her. Clownhunter misses, and the two fight. Harley toys with Clownhunter during the fight, pointing out his youth and dancing around his attacks. She tells him that she won’t kill him, as she’s trying to walk on the good side these days. But she does knock him out.

Batman crashes through the window to Harley’s apartment, and he’s been stabbed. Before Harley has time to react, Ghost-Maker leaps into the scene. Harley makes fun of Ghost-Maker’s name as Batman recovers. Ghost-Maker knocks out Harley with a dart. Batman then coughs out the name of the serial killer that Ghost-Maker caught. The name is Denton Quill, and Batgirl has been tailing him for two weeks, looking for where Quill hides his trophies, so Batman can give the families of Quill’s victims closure.

Batman follows up with the news that Ghost-Maker detonated a RICO case by busting those judges too soon. They were working for an international mob boss named Tiger Shark, and Batman was closing in. The Caped Crusader also revealed that he replaced the ammunition in those Santa Prisca shipment days ago, and he was waiting to bust the buyers.

Ghost-Maker changes the conversation to Clownhunter, noting that the vigilante has killed more than even the serial killer Denton Quill. He questions Batman for protecting the murderous teenager. Batman reveals Clownhunter’s origins, noting that Blackgate wouldn’t heal what’s broken inside the young vigilante.

Ghost-Maker tells Batman that his emotions are getting in the way again, then takes him off the field with a knockout dart.

Analysis: This follow-up to last issue’s introduction to Ghost-Maker is terrific, and we get one of the best looks of where this post-Joker War era of Batman will lead to in this issue.

Batman #103 focuses on reasserting what makes Batman great, celebrating the kind, emotional, and sympathetic heart of Batman. In this issue, he’s pitted against Ghost-Maker, who champions this idea of cold, logical thinking over matters of the heart. Ghost-Maker is more of an absolutist, following unbendable rules that grant him the ability to be judge, jury, and executioner. If someone commits murder, they deserve punishment befitting the murder, no exceptions. Batman, on the other hand, evokes more of a social worker/case study angle, digging into the roots of why the crime took place in the first place and looking for how it can be prevented from ever happening again.

While Ghost-Maker and Batman battle, we see them arguing their points of view atop Gotham City. Ghost-Maker has stopped all of these crimes, but Batman points out the simplicity of Ghost-Maker’s victories. They’re hollow, repetitive, and often unhelpful. Ghost-Maker has stopped individual symptoms, but he never got to the root of what created those symptoms in the first place. This is best seen in the case with the district judges, where Batman was waiting to rope everyone into a RICO case and bust the criminal organization as a whole, rather than attack pieces that will easily be replaced with the organization still operating otherwise.

It should be noted that Batman is wearing his grey and blue outfit again in this issue, and he’s been sporting a shade of grey and blue ever since the end of Joker War. This could be indicative of a change in direction, of this new status quo outlined in Batman #101.

Harley Quinn plays a supporting role in this issue, and we’re privy to her evolution as a character. She has fully shed off the moniker of the villain, confessing as much to her rescued plant. While she may not follow in step with Batman, she’s content with finding herself and reconnecting with that hopeful young doctor who originally wanted to help people before being lured away by the Joker.

The art is great in this issue. Carlo Pagulayan, Danny Miki, and Guillem March work well together. March’s art works especially well near the end when Ghost-Maker gains the upper hand over a bleeding Batman. It has that right amount of grit and grime to it.

David Baron does an excellent job, as always, of capturing the vivid colors of this issue’s cast of characters, and he really elevates the blues in Batman’s costume. In the past couple of issues, this blue has been muted, but here, with Batman championing a more empathetic style of justice, the more vibrant blue really beats home this idea of what justice means and how it can be even more effective than old school, draconian tactics. It’s thoughtful, and it makes this issue more memorable and exciting.

Final Thoughts: The spar between Batman and Ghost-Maker isn’t just physical in Batman #103. It has welcome layers as writer James Tynion and team further bring Batman back to the hero we love.