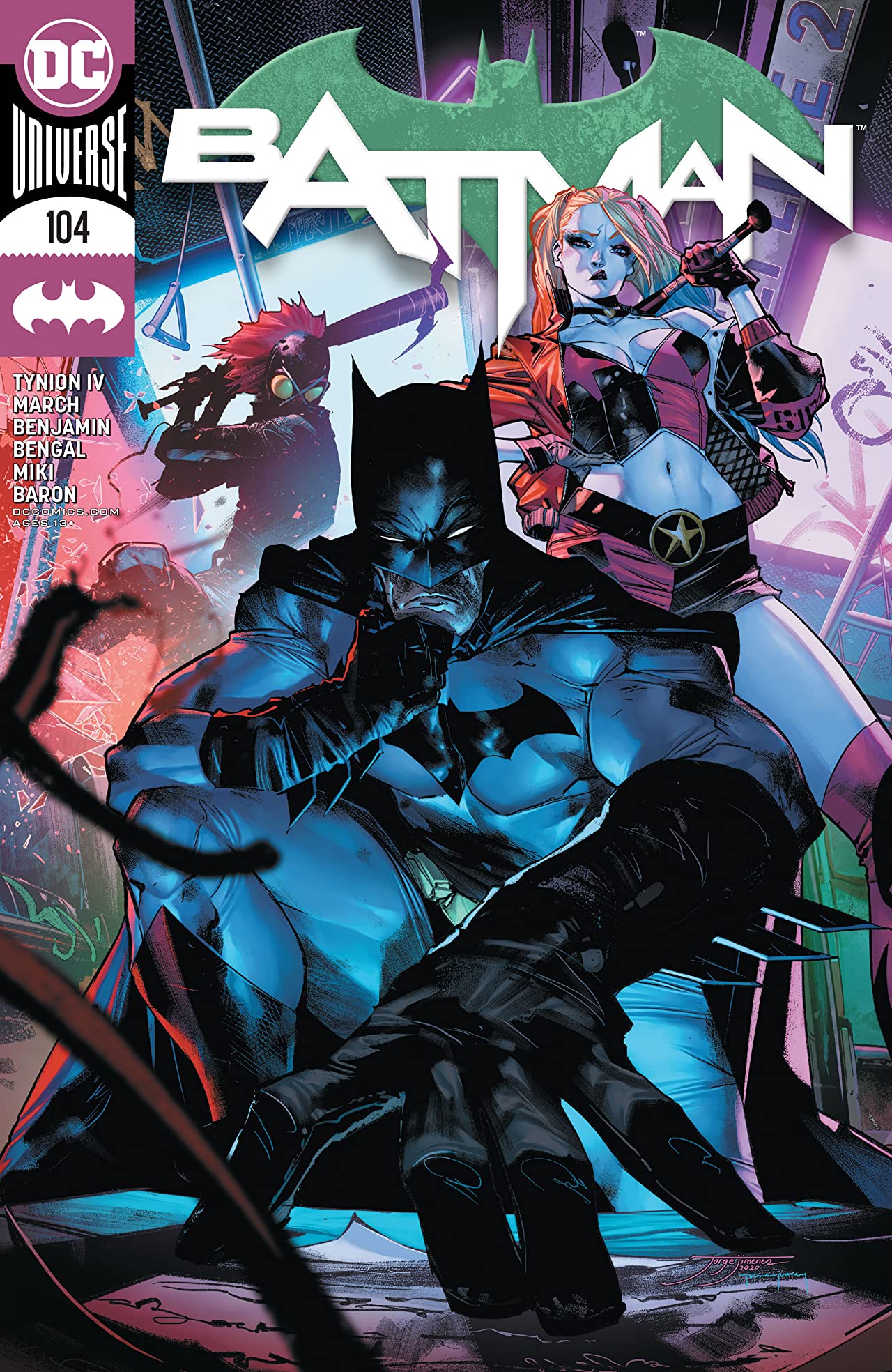 Overview: The Bat-Family hunts for Batman. Meanwhile, Batman finds himself trapped at the mercy of Ghost-Maker and Clownhunter.

Synopsis (spoilers ahead): Deep down in the labyrinthine Arkham Asylum, Ghost-Maker stitches up an unconscious Batman. Nearby, Clownhunter and Harley Quinn lie unconscious. Batman wakes up, and Ghost-Maker tells Bruce Wayne that this is for his own good, that Ghost-Maker is going to show his former friend a better way.

At a bank in Blüdhaven, Nightwing stops a robbery while Barbara Gordon fills him in over their communication channel. Barbara laments not getting a visual on Ghost-Maker, to which Nightwing responds by telling her that she won’t from the Clock Tower. He then recalls his only encounter with Ghost-Maker.

Years ago, Batman and Robin were flying after a lesser villain overseas. Upon landing, they were greeted by a ghostly figure waiting for them in the rain. Robin waited in the Batplane while Batman went out to talk with this figure. Shortly after, Batman returned, only to punch one of the consoles on the Batplane.

Batman then confessed to Robin that this figure was Ghost-Maker and that the two were friends, once. They bonded over their mutual interest in stopping crime, training together, and trusting each other with secrets. Bruce eventually told Ghost-Maker the motivation for his pursuit of justice. Angry, Ghost-Maker called Bruce weak and attacked him.

The two parted ways, and they made an agreement never to engage each other wherever they made camp. Ghost-Maker would stay out of Gotham, and Batman would avoid wherever Ghost-Maker was. The villain Batman and Robin were pursuing, unfortunately, was in Ghost-Maker’s territory, which meant that the dynamic duo had to relinquish pursuit.

Nightwing ends his story by telling Barbara that he’s tried to research Ghost-Maker over the years, though evidence available is slim. He said that he did it because he considered Ghost-Maker as Batman’s true partner, and he wanted to beat this old frenemy.

Batgirls Cassandra Cain and Stephanie Brown call in just then, telling Barbara Gordon that they’re at the spot where Batman, Harley, and Clownhunter were taken. The plants in the apartment have spelled out “Arkham” on the walls.

At Arkham, Harley and Clownhunter finally wake up. Batman tells them that this is all a test from Ghost-Maker. This new foe is trying to provoke Batman.

Both Batman and Harley Quinn are strapped down to their respective medical tables. Clownhunter, however, is not. He climbs up and sees that Ghost-Maker has left a bunch of weapons for him to play with. After telling Harley that she was there the night that Joker killed his parents, Clownhunter holds a sword above her throat.

Analysis: This issue mostly fills in the gap on bits of exposition we may have been missing in the last couple of issues. The bulk of Batman #104 relates to Nightwing’s one encounter with Ghost-Maker, establishing why Ghost-Maker is both an intimidating, as well as a hidden, threat. The story Nightwing tells Barbara Gordon from years ago serves to affirm the notion that this villain could have existed as long, if not longer, than Batman without anyone hearing an utterance of his name. It further elaborates on Bruce’s past relationship with Ghost-Maker, as well as establishes this villain as a new kind of foil for Batman going forward.

The most important thing this story does, however, is establishing a feeling of loss and shame in Batman. When Bruce tells his deepest, darkest secret to Ghost-Maker, this supposed friend recoils and attacks Bruce. Nightwing tells Barbara, and us, that this rejection was extremely painful, as Batman never spoke of Ghost-Maker to anyone, only acknowledging the villain’s existence when forced to. When the two met once more in Nightwing’s story, Batman was so enraged after, he lost control and destroyed a console on the Batplane.

The art, particularly in this flashback, is phenomenal. Ryan Benjamin, Danny Miki, Bengal, and Guillem March provided art for this issue. Though the style and penciling switches often throughout Batman #104, it mostly works, especially in the Robin flashback. In these moments, we’re treated to a Batsuit straight out of the seventies with a grey/blue classic look, complete with the gold Batman emblem. There’s a particularly awe-worthy moment when this classic Batman and Ghost-Maker reunite. One half-page panel on the left depicts a muscular Batman with a flowing cape standing atop the Batplane. On the half-page panel on the right, Batman’s figure reflects off the wet, metallic sheen of Ghost-Maker’s faceless helmet. Between the two panels, a wide-eyed Robin watches as the two titans argue (without audible words). This spread is elevated by David Baron’s coloring, wherein blue and red overtake one another in these flashbacks, making for a memorable (and important) scene that plays with how we read it when it comes to the dueling color combinations.

This eye-catching art goes a long way in elevating and emphasizing the meaning of these moments, especially in an issue where readers get a lot of backstory and exposition in anticipation of the next issue’s showdown between Batman and Ghost-Maker.

Earlier, I mentioned that the constant art changes throughout the issue mostly work. There are weaker moments, namely when Nightwing and Barbara Gordon are talking. The penciling is much simpler and lighter. Compared to the heavy, grizzled art of Batman trapped in Arkham Asylum, as well as the dark and atmospheric rainscape of Batman’s reunion with Ghost-Maker,  the Nightwing scenes feel almost childish and out of place. At first glance, it can be off-putting, especially since even the paneling seems to change from the rhythm established earlier on in the Arkham Asylum scenes.

Overall, we’re seeing the weaving of a web wherein the Bat-Family will have to race against the clock in order to stop Clownhunter from killing Harley Quinn. Writer James Tynion IV has the pieces in play, and it’s difficult to predict what direction he’s aiming to take this story in, which is great! Regardless of how this plays out, we’ll most likely be surprised.

Final Thoughts: Batman #104 is a solid issue that serves to both define Ghost-Maker as Batman’s foil and obscure the path forward with multiple characters racing against the clock.