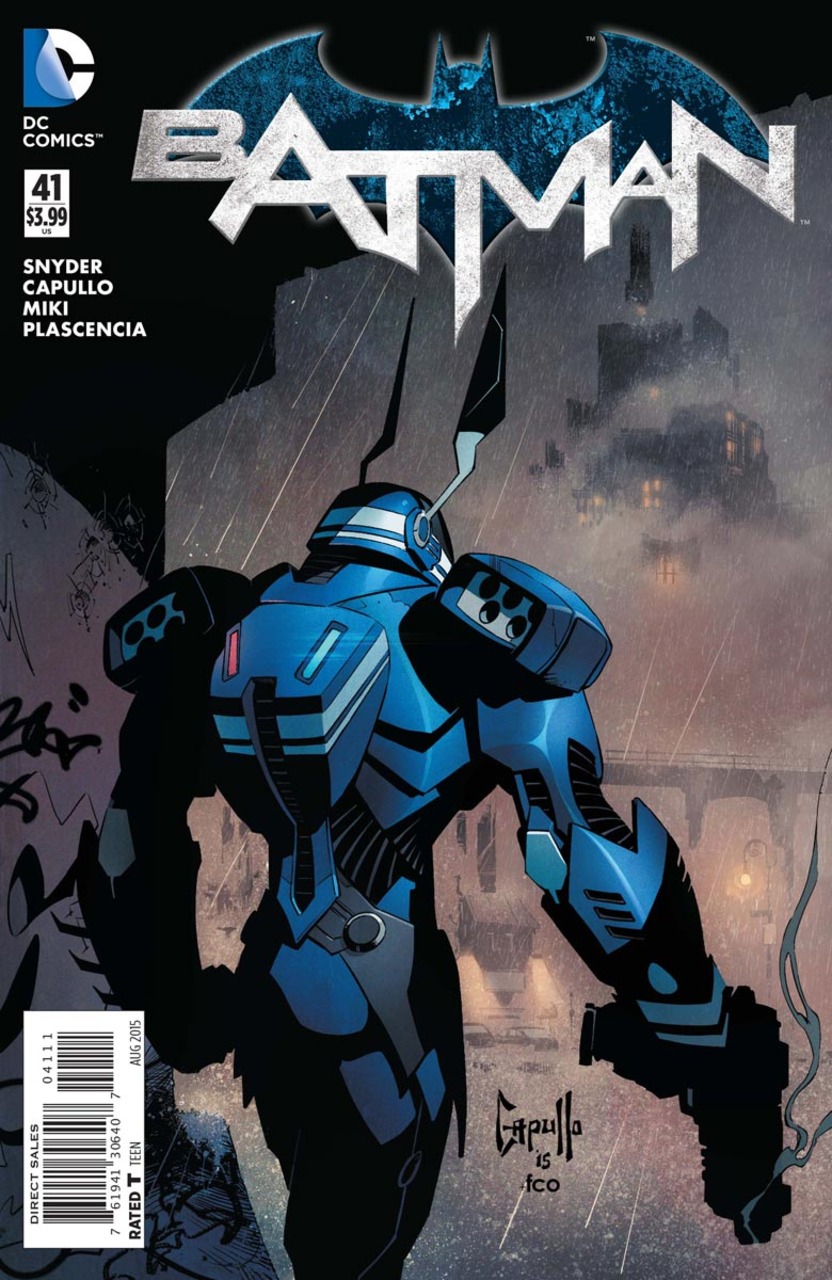 Hey guys! After six months off, I’m back doing reviews to the Batman Universe. The last year has been very difficult for me and my family, but hopefully things will settle down here… unlike this book. This book has been a target of controversy since it’s announcement a few months back. Some people are excited for the idea of a new Batman, other people have despised the concept, and threaten to stop reading the book all together. Let’s get real here, though; no one is dropping this book for that reason, because it’s too awesome. I wasn’t sure how I’d like the story. In fact, I thought that Detective Comics was going to be the better book this week. The eight page preview had amazing art and an interesting premise, but it didn’t get me as excited as some other books did. I did do my best to stay positive. Scott Snyder has yet to write a bad story, in my opinion. I can say that with full confidence, as I just did a power read of Snyder’s Batman run thanks to a recent sale on Comixology, and thanks to that, I have noticed some Easter eggs that have carried through to the current story they are telling. But before we get into that, if you haven’t read this book yet, and you are wondering if you should, AND you are asking my personal opinion because that’s kinda the point of comic reviews…. Yes. Buy it. NOW.

We open with a man sitting on a park bench, watching the sun set. Geri Powers is talking about how new elements have begun showing up, and how important their researching of it is, while in downtown Gotham, an energy monster is destroying the banks and yelling static. The Powers family has been mentioned in almost every story arc of Snyder’s since Court of Owls. Of course, this family plays a major role in the Batman Beyond Universe. Anyway, Commisioner Sawyer (who I thought was a man until they said her name… she has a man jaw.) and the GCPD are trying to keep the monster contained until Batman shows up. He arrives hanging upside down from a Bat-Blimp, which shines a Bat-signal down onto the monster. Powers, Julia (Pennyworth – she’s undercover) Perry, and Daryl Gutierrez are piloting the blimp and feeding Batman information.

Batman fights the monster, and even tries to give it an Electro Magnetic Pulse, but it’s not fazing the monster. So Batman comes to the conclusion it’s being controlled from elsewhere. Luckily, he knows his baseball, and finds that a retired player in the area has been beaten, while his attacker is using some tech to control this monster. The attacker is Precious Precious (his parents must have been LOTR fans) a member of the whisper gang, who we met in the Court of Owls story. The new Batman ditches his new armor to go into stealth mode, and take out Precious with a taser gun in his awesome looking stealth Batsuit. (Note: the Batsignal on his chest looks strikingly similar to the bat that Bruce cut out to use as a shield in Zero Year… Just thought that was a neat touch) Batman salutes the GCPD, and goes to his new fancy apartment/cave.

Three months earlier, Powers brings Jim Gordon to a training facility to show off the people they are training for their Batman project. She tells them that he would make the best Batman, because he knows the city better than they do. Gordon mulls it over, talks to Harvy Bullock about it. Gordon thinks it may work better with Batman working within the law. However, Bullock doesn’t like the idea. One of the trainees comes up on the roof to talk to his newborn baby over the phone. This gives Gordon the final push he needs to don the… helmet – so that others don’t endanger themselves and their families. Bullock tells Gordon he needs to stop smoking, and get lasik surgery.

Powers introduces Gordon to the suit, and THEY MAKE FUN OF IT, “Robo-Bat-Bunny”. Gutierrez takes this personally, as he’s he one who designed the suit. He shows of different color schemes, including: Dark Knight, 70’s, Zur-En-Arrh, and Zero Year. We close with the man sitting on the park bench from the opening. A man walks past, and recongnizes him as Bruce Wayne.

This book really surprised me. It balanced the action, and plot thread throughout very well, and with the exception of mistaking Maggie Sawyer for a scrawny man, Capullo’s art was amazing, as usual. I’m also very happy that Snyder didn’t drag out the ‘Bruce is dead’ story. He teases us with that from the opening page. Snyder’s possibly last ten issues are going to be a lot of fun.