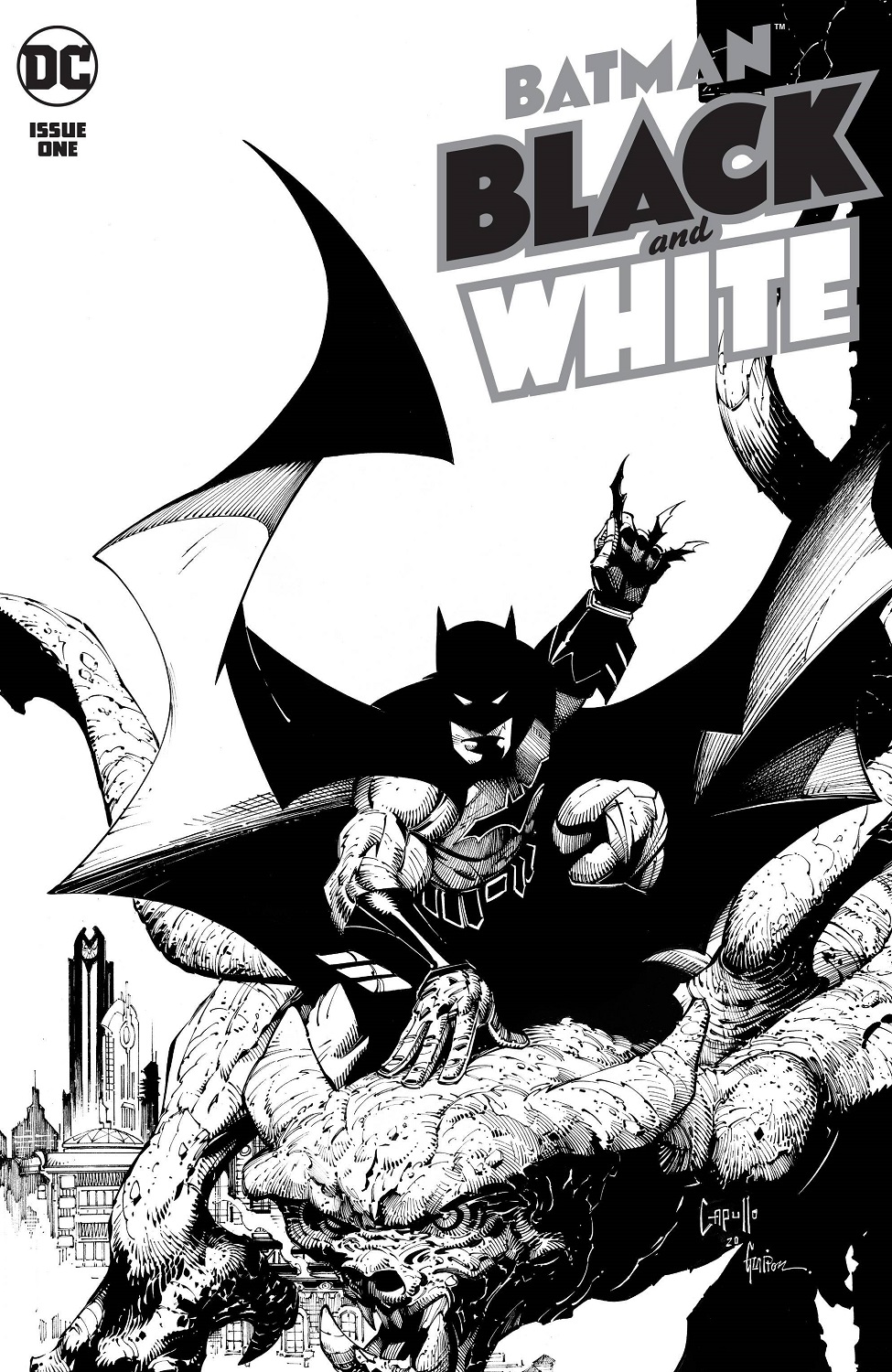 Overview: The acclaimed format of Batman short stories in black and white art returns in the first of six anthology issues.

Synopsis (spoilers ahead): “The Demon’s Fist” – writer James Tynion IV and artist Tradd Moore: A member of the League of Assassins joins in an all-out assault on Batman, his only job to land one blow on the Detective. He does so, and Batman responds by knocking him out, which he does gladly, feeling that he was part of something bigger than himself.

“Weight” – writer/artist J.H. Williams III: On a rooftop, Batman muses over his past, present, and future moments appearing as pearls from his mother’s necklace.

“First Flight” – writer Paul Dini and artist Andy Kubert: Tired from many fights, Batman arrives in the Batcave, only for mutated League of Assassin members called Ninja Man-Bats to attack him. He fights with all his remaining strength, skill, and technology. Talia al Ghul comes to his rescue, tranquilizing the remaining mutants, explaining they were her first experiment in the sequence that led to the events of Batman and Son. Batman sends the Ninja Man-Bats to Swamp Thing for training and healing.

“Sisyphus” – writer/artist Emma Rios: A poetic, grotesque meditation on the creation and legacy of Batman.

“Metamorphosis” – writer G. Willow Wilson and artist Greg Smallwood: Batman finds Killer Croc in a woman’s apartment, but discovers mid-fight that she is in love with Waylon. He thinks of his similarity with Croc as the two are led away by the police.

Analysis: Batman: Black and White has a lot of affection from collectors for highly polished short stories highlighting artists and writers in the chiaroscuro (black and white) form. There’s always a sense of artistic focus that comes with this combination, and that’s no exception with these five short stories. James Tynion presents a meditation on being part of something bigger than himself, undoubtedly like much of his work a commentary on how he feels as the writer for Batman and other major properties. Tradd Moore imbues this heartfelt, if slight story with zany energy, sometimes nausea-inducing, but without question consistently interesting.

Writer/Artists J.H. Williams III and Emma Rios present moody comic-tone-poems about Batman’s history and meaning, and though utterly gorgeous, they don’t really tell a story or present that much new to this particular reader. Perhaps a newer reader might find the same kind of insight that Kelley Puckett and Tim Sale’s short from a previous incarnation of Black and White, “Night After Night” (see the adapted motion comic here) gave me when I read it many, many years ago. One can hope!

G. Willow Wilson’s Batman vs. Croc story has a bit higher ambition, highlighting the power of Batman’s villains in their connection to his own nature, and artist Greg Smallwood really presents gorgeous imagery and storytelling. Paul Dini, to this reader’s eye, presents the best of the lot – a tale fleshing out the backstory of the famous Grant Morrison story “Batman and Son”, and giving some nice moments to Batman, Alfred, Talia, and Swamp Thing. A similar game was played in Patrick Gleason’s Robin, Son of Batman, with similar effectiveness.

All in all, despite the great talent, none of the stories, even Dini’s, present enough justification for DC to return to the Black and White standalone publication. Perhaps readers of these reviews may be a bit familiar with the following suggestion, but putting these as backup stories in the main Batman title, similar to how the first run of Black and White played as back features for the Gotham Knights ongoing series, might have given more satisfaction than a “prestige” publication that feels somewhat empty after consumption.

Greg Capullo’s main cover presents a more stark variation of the image he used for his Decade Variant for Detective Comics #1000, while Tyler Kirkham, Kyle Hotz, Mico Suayan, Peach Momoko, and J.H. Williams provide five variants to choose from. Williams connects his cover closely to his story, which is nice, while Peach Momoko draws an image of Talia inspired by Dini’s tale. Similar to the interior contents, while all highly polished, none of them are quite at the top of the creator’s game.

Final Thoughts: Though top-flight talent is on display, with one exception, each story offers very little to this Batman fan that will stick.