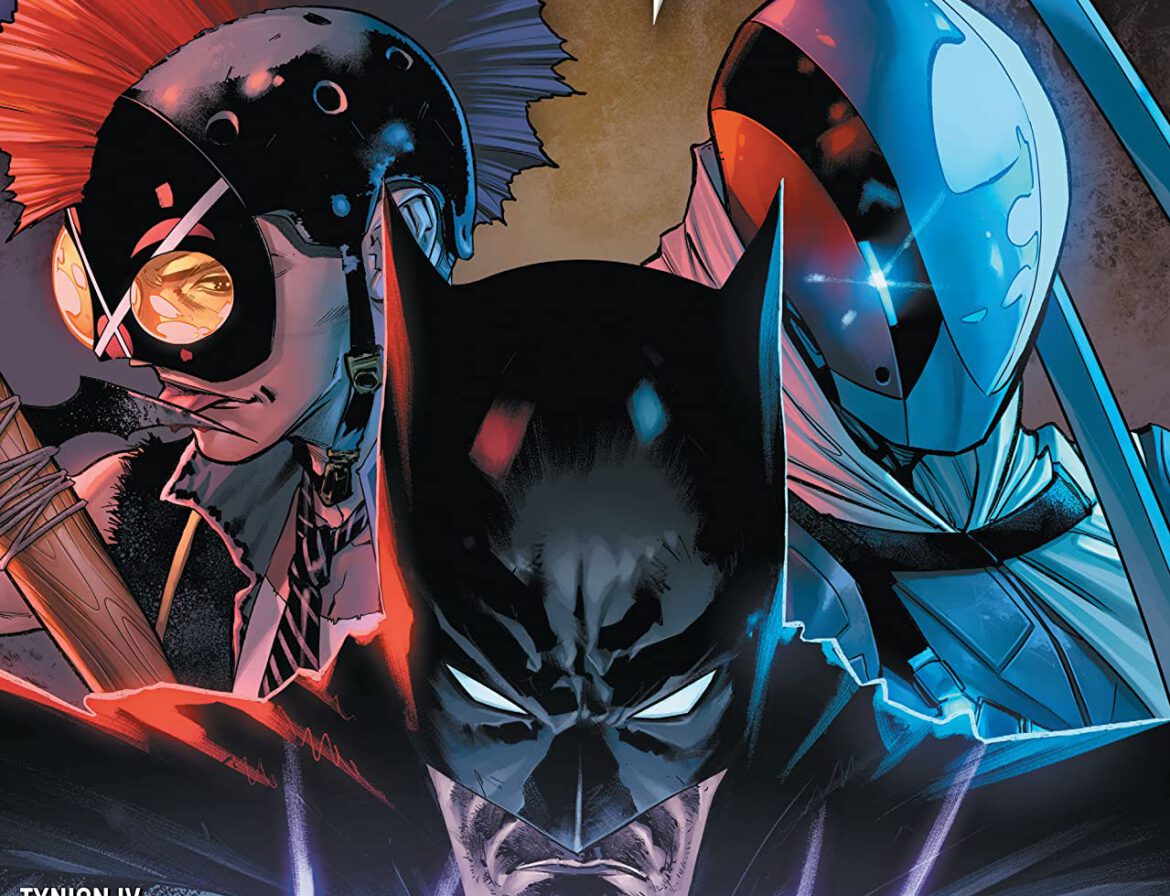 Overview: Batman and Ghost-Maker have their penultimate showdown at Arkham Asylum.

Synopsis (spoilers ahead): Years ago, at an Argentinian airport, as a young Bruce Wayne is about to board a plane headed toward Gotham City, Ghost-Maker reasons with him one last time. Ghost-Maker tells Bruce that Bruce is giving up, that he’s fulfilling the vow of an eight-year-old rather than continue and further hone the art of crime-fighting. Ghost-Maker implores Bruce to stay, to join his kindred spirit and fight crime side-by-side. In his argument, Ghost-Maker reasons that letting each soul lost to crime cut against one’s self is a pathway to destruction.

In the present, at Arkham Asylum, Clownhunter stands with his sword held above Harley Quinn’s throat (as seen in the final panel of Batman #104). Batman sits up on the operating table he’s strapped to and pleads with Clownhunter not to kill Harley. Batman explains that it’s a trap and that if Clownhunter kills her, Ghost-Maker will kill him in turn.

As Clownhunter raises his sword, Batman manages to fling a batarang at Harley. Harley catches it and frees herself, which provides enough of a distraction for Batman to escape and knock the sword out of Clownhunter’s hands. As Clownhunter reaches for a knife, Harley stands her ground and reasons with him.

She tells Clownhunter that she doesn’t remember the night his parents died. Harley apologizes, then tells her story of how she wound up with the Joker, of how doing things that make one feel stronger have consequences. She tells Bao Pham, Clownhunter, that because she wanted to feel powerful, she was manipulated by a sick man and will be paying for the consequences of her actions for a long time. When she’s done, Harley offers her neck.

Clownhunter stabs the knife into a wooden desk and storms out of the room. Batman thanks Harley, and Harley affirms that she meant every word. Before the two can talk too much, Batman tells Harley that she needs to leave. He then picks up a sword, ready to confront Ghost-Maker.

Ghost-Maker and Batman duel, with Ghost-Maker telling Batman that he will catch Clownhunter again. Batman snips back that catching Clownhunter won’t be much of a challenge. He doubles down on his philosophy, telling Ghost-Maker that if Batman killed his villains, people like Harley wouldn’t have the chance to learn and grow, to become better people, and offer good to the world.

The two trade words and jabs, with Batman ultimately throwing his sword down. He doesn’t want to fight, and he expresses as much. Ghost-Maker agrees to quit, noting that he’ll leave Gotham City in the morning, per their previous arrangement. Batman then tells him that he doesn’t have to.

The two small-talk briefly, until Batman offers Ghost-Maker a spot within the Bat-Family. Using the pretense that he’s getting older and has fewer resources, Batman offers that he could use Ghost-Maker’s help, and Ghost-Maker wouldn’t have to wear a bat symbol. The only condition is that Ghost-Maker couldn’t kill anyone, to which Ghost-Maker agrees.

As the two prepare to meet the rest of the Bat-Family, who have been on standby, Ghost-Maker gets an alert from Oracle about the Circus of the Strange hijacking the Gotham Symphony Orchestra. The two heroes run off together, racing each other to the action.

Analysis: This was as perfect of an issue of Batman that we’ve seen in quite a while. It’s heartfelt, passionate, full of surprises, and beautifully brings closure to the journey Batman has been on since this title relaunch in 2016. This is the characterization of Batman that we’ve been missing for years now — Batman the role model, the hero we want to look up to.

Closing out the Ghost-Maker arc, “Ghost Stories,” writer James Tynion IV throws us a well-placed curveball. Over the course of the past three issues, readers have been primed for a penultimate duel between Batman and Ghost-Maker — literally a feud that has been decades in the making. We get a brief start to a sword fight in classic fashion, with a shirtless Batman brandishing a stance readers may recognize from one of Batman’s earliest encounters with Ra’s al Ghul. The fight takes a drastic turn, however, when Batman throws down his sword and levels with this former friend. It’s certainly surprising, especially since we’ve been desensitized and used to a moody Batman bludgeoning his way out of problems in the previous run with writer Tom King. It’s not out of nowhere, though. Tynion foreshadowed this turn twice in this issue.

The first tease was in the opening flashback of Batman #105. We get an argument between a young Bruce Wayne and Ghost-Maker as Bruce is about to abandon his training and head back to Gotham. Ghost-Maker pleads with his friend, practically begging Bruce to stay before the two trade blows. This stands in contrast to Dick Grayson’s recollection of Ghost-Maker from the last issue, wherein Batman and Ghost-Maker seemed to be on far darker, more fatalistic terms. It’s clear in this issue’s flashback that Ghost-Maker doesn’t want to quit on his friend, a feeling that is mutually felt by Batman.

The second tease comes when Harley Quinn offers her neck to Clownhunter. She levels with the angry, young vigilante, offering up her faults and apologizing for the trauma and destruction she created in Clownhunter’s life. Instead of knocking out Clownhunter, she took a higher road, and it seems to have paid off. It seemed risky to Ghost-Maker, but as Batman pointed out in their conversation right after, abducting Clownhunter again after this encounter doesn’t require much skill from either of the two vigilantes. Moreso, what Batman is saying is that it’s too easy. It’s too routine, and it won’t allow Clownhunter the chance to grow, as Harley has grown. One needs to take the risk for it to play out differently.

The themes in Batman #105 are complex. There is a lot said on the surface, and what’s left unsaid is the implication that taking this more compassionate, the higher road is difficult, albeit more fulfilling and rewarding. Tynion and the creative team have argued a case for mercy in this issue, and it couldn’t have come at a more perfect time, one wherein the world outside of comic books feels so bleak. These are the vibes we need as we close out 2020, the calls to action we should hear in order to push through, find that inner strength within us, and reflect it outward into the world.

Carlo Pagulayan, Danny Miki, Alvaro Martinez, and Christian Duce provide art for this issue, and their collaborative input hit home these ideas. The moodiness and darkness in that opening scene in the rain with Ghost-Maker and Bruce Wayne is cliche, but it really drives home the sadness and despair at their fallen relationship. It’s the setup that helps us, as readers, take our own figurative walk from darkness into light.

One of my favorite artistic touches is in the penciling and coloring (by David Baron) of Clownhunter’s face before he’s stopped by Batman. The parts of his face that are visible are masked by shadow as he holds that sword above Harley. As he raises the sword higher, the shadows grow even darker to where there’s nothing but that scary Clownhunter mask and menacing teeth baring in an off-center, crooked panel that gives this issue its most intense moment. It’s a darkness we haven’t seen depicted in Clownhunter yet; one that’s released and disappears from the panels afterward as Harley reasons with him.

The most promising and exciting panel, of course, is that final depiction of Batman and Ghost-Maker leaping into action. They’re running straight out of the page, with uplifting banter that evokes a sense of positive action. This shot reinforces the theme of Batman’s compassion, hitting home this sense of achievement that instills readers with their own power to do good in the world. It makes us feel like kids again, gazing in awe upon our hero, mentor, and role model. That’s a beautiful achievement.

Batman #105 is an expertly crafted call-to-action that challenges us to look beyond the use of force and focus on the compassionate ways in which we can make the world a better place. And it accomplishes this with a genuine love for what the world can be.