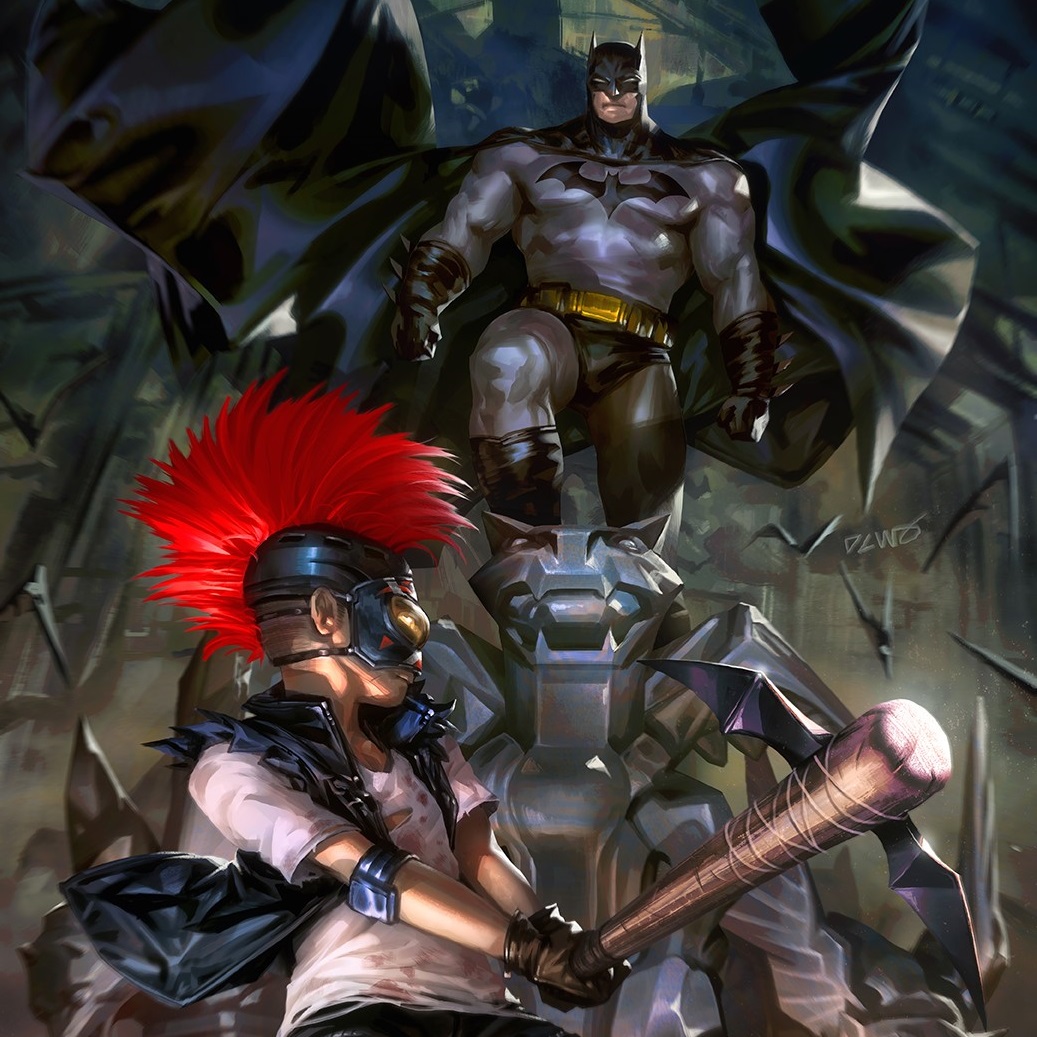 Overview: Clownhunter seeks help from Dr. Leslie Thompkins, and in the process of healing, recalls his own origin story.

Synopsis (spoilers ahead): Dr. Leslie Thompkins walks down Crime Alley alone, remembering the death of the Waynes, of how this spot was once called Park Row before earning its new name after such a high-profile murder. As Dr. Thompkins reflects on Batman’s origins, a mugger attempts to rob her. Dr. Thompkins tells the mugger that she’ll offer no trouble, she just needs to get the keys to her clinic out of her purse.

Before the mugger can snatch the purse, a man by the name of Big Henry stops him, informing the mugger of who Dr. Leslie Thompkins is and what she’s done for the neighborhood. When Big Henry threatens the mugger, the mugger drops his knife and bolts. Dr. Thompkins thanks Henry, adding that she wishes he didn’t resort to threats of violence. Big Henry tells her that he’s been attending anger management classes down at the clinic.

As Dr. Thompkins reaches her clinic, she sees the figure of Clownhunter standing atop a nearby building. He’s watching her. Clownhunter was directed to visit her back in Batman #100.

Inside her clinic, Dr. Thompkins puts on a spot of tea when suddenly she hears a crash. Clownhunter’s broken through one of her windows, and he’s injured himself on the carpet. Clownhunter apologizes for the mess, and he mentions that Batman sent him.

Three years earlier, Bao Pham is playing video games when his mom interrupts his game session. She wants him to help with their restaurant, chiding him for losing himself in a fake world. “We need you in the real world doing real things,” Bao’s mother says.

As Bao helps his father downstairs with cleaning their family restaurant, Harley and Joker enter after a night of robbing the diamond district. Bao eyes a nearby cleaver to defend himself with, but his father steps in, saying that they don’t want to escalate anything.

After their meal, Harley leaves to go get the car ready while Joker stays behind to settle up. When Bao’s parents refuse to charge Joker, he offers to leave a nice, big tip. Joker’s tip is, “Don’t breathe.”

Bao’s parents die a horrible death from Joker’s toxin. Bao, coming back into the room, is thrown a hundred dollar bill from Joker, who tells the young man, “Take it from me, kid. Parents only get in your way.”

After the police arrive, Commissioner Gordon talks to Bao outside of his family restaurant. Gordon tells Bao that someone would like to talk with him. That someone is Batman, who promises Bao that he’ll do what he can to make sure Joker never hurts anyone ever again.

In the present, Dr. Thompkins patches up Bao’s arm, telling him that she’s heard all about the Clownhunter and his crusade. She asks why Clownhunter has come now, especially when Batman gave Clownhunter her card months ago. Bao tells Dr. Thompkins that he encountered Harley Quinn and didn’t kill her (Batman #105), and now he’s having an identity crisis.

When Bao tells Dr. Thompkins that he’s seventeen, she tells him to spend his time doing normal seventeen-year-old things. That’s when Bao expresses how video games have a logic to them, but the world at large doesn’t. He’s adrift, and he doesn’t know who he is anymore.

Bao expresses how he used to believe in Batman’s way, used to be understanding and believing that people’s hearts could change. He notes how, time after time, Joker kept returning and hurting more people, and each time Batman didn’t fulfill his promise, Bao’s belief in the hero diminished.

During the Joker War, Batman was missing for days. Bao waited for Batman, but when one of the fellow residents in his apartment complex was lit on fire by Joker’s goons, he remembered what his mother told him years ago: “We need you in the real world doing real things.”

It was then that Bao became Clownhunter. He patrolled the Narrows, dispatching Joker’s goons left and right. Life made sense, and the people of the Narrows cheered him on. It felt good, too, but in letting Harley go, Bao wondered if he was ultimately a bad person carrying out bad deeds.

Clownhunter didn’t want to become a monster or hurt people. He just wanted people to follow the rules and for justice to prevail.

Dr. Thompkins tells Bao about a man she knew who grew up down a dark and violent path. She’s spent years trying to convince him otherwise, as she firmly believes that violence isn’t a solution. It just begets more violence.

When Bao mentions that Dr. Thompkins is friends with Batman, she tells him that she’s known Batman for a long time, and she hopes, maybe tomorrow, that she’ll convince the dark knight to use his gifts in better ways. She then offers Bao an opportunity to help out at the clinic and bring goodness to the world.

As Bao leaves, Dr. Thompkins asks if she could meet the man under the Clownhunter mask. He removes his helmet, and the two greet each other face to face.

After Bao has left, Batman tells Dr. Thompkins that he’s grateful for what she said to the young man. She tells Batman that though she disapproves of his methods, she will always tend to the frightened, angry children broken by this city.

Analysis: Batman Annual #5 is a stellar, reflective issue that both celebrates the history of Batman and furthers the new era that writer James Tynion IV has helped co-create.

In this annual, we get the long-awaited origin story of Clownhunter (Bao Pham) that’s been teased and referenced from Joker War onward. Like Bruce Wayne’s origin, Bao’s parents are brutally murdered before his eyes, and he feels partially responsible for their deaths.

The murder is absolutely horrific. James Stokoe provides the art and coloring in this issue, and the panels in which Bao’s parents die are both tragic and frightening. Readers are offered several panels of their faces slowly contorting as Joker’s ghoulish grin forces its way onto their faces. Their eyes widen and bulge, and Bao is left to stand before their twisted bodies with a look of terror and disbelief.

Readers have long-heard Clownhunter talk about how Joker and Harley murdered his parents, which resulted in the birth of such a brutal, murderous vigilante. Stokoe’s art serves as a definitive, grisly testament as to why Clownhunter is such a violent and vengeful judicator. He pulls no punches here.

What’s interesting about this origin is that it’s telling is tethered to Dr. Leslie Thompkins. This one-shot is called “There is Hope in Crime Alley,” which is a clear nod to the Denny O’Neil and Dick Giordano-crafted Detective Comics #457 story “There is No Hope in Crime Alley.” In the O’Neil/Giordano story, Batman’s origin is retold, and in this retelling, Dr. Thompkins is there to help nurture and heal a young Bruce.

Whereas Bruce Wayne grew up to become a vigilante waging a never-ending war on crime, Bao Pham is offered a choice in this current iteration. He’s confused, and life isn’t as black and white as it seemed during the Joker War. In letting Harley Quinn live, Bao stepped out of his Clownhunter persona, which provides the opportunity for him to truly find himself and become someone different, someone better than Batman.

Dr. Thompkins offers this alternative path amidst a beautiful conversation of why the world doesn’t make sense and why violence is never a permanent solution. She gives Bao a hard pill to swallow in reciting her belief that even criminals as awful as the Joker have a humanity to them buried somewhere deep down.

Bao doesn’t make a decision on what path he’d like to take, but he does remove his Clownhunter helmet, which might hint at him accepting the volunteering position at Thompkins’ clinic. It’s a great note to end on, one that truly does provide hope for a better tomorrow.

Oddly enough, while this one-shot gives readers a heartfelt message of love and compassion for even the worst among us, it’s surprisingly violent in its artwork. During the scenes in which Bao takes up the persona of Clownhunter and exacts vengeance upon Joker’s goons, his attacks are brutal. In one panel Clownhunter smashes a molotov cocktail that immerses a goon in flames, and in another scene, Clownhunter is seen leaping into the air after yanking his bloody bat out of the skull of another criminal.

The catalyst that causes Bao to put on the Clownhunter mask is also mortifying. A woman in his apartment complex is burned alive by Joker’s goons, and readers see her charred, black and red flesh through billowing smoke. It almost feels like a Junji Ito horror manga in how deeply unsettling this sight is.

The purpose of these depictions seem to solidify Clownhunter’s resolve in the readers’ minds, but in a one-shot supposedly about hope and finding a better way, it’s a stark contrast that might not ultimately work in tandem with the overall theme and message.

That said, the positives definitely outweigh the negatives, and Batman Annual #5 is a well-conceived and beautiful celebration of Batman, both classic and new.

Batman Annual #5, though sometimes brutal in its artwork, is a call-to-arms about finding a path forward beyond violence in a way that’s both sincere and heartfelt.