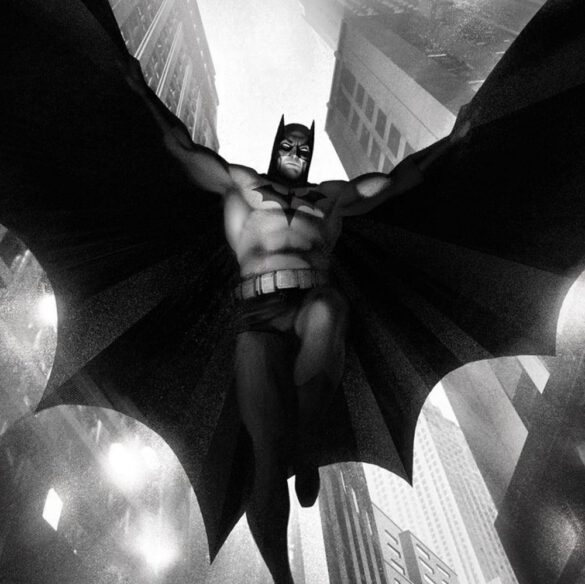 Overview: The acclaimed Batman anthology series is back with Batman: Black and White #3 and five new stories of the Dark Knight Detective!

Synopsis: The Next Batman, Jace Fox, has been captured by the Igloo Bois, a group of former muscle under the employ of the Penguin who banded together after the Penguin was taken out by the Magistrate. With Right-Wing extremist beliefs, they were smuggling weapons and kidnapped a cop when Batman tried to intercept them. Strung up off the ground by chains, they beat Batman with a crowbar until his face-shield breaks, revealing his black skin. But Batman didn’t arrive alone. Soon Jace’s kid sister, Tiffany Fox, arrives in a costume, breaking Jace’s bonds with batarangs. The siblings take refuge amidst the Igloo Bois’ gunfire, strategizing who takes out who. Jace wants the leader, while Tiffany takes out the rest. Quickly outfighting him, Batman takes his time working over the leader, giving back more than what he got. As the two leave the scene, Jace regrets the choices he’s made in bringing Tiffany in on his war on crime, citing worry over what his parents may think should anything happen to the two of them. Tiffany says that no one controls their destinies, they can only hope to live up to them. With that, Jace’s confidence is renewed and the two drive off in their respective motorcycles.

Analysis: I’ve really been enjoying John Ridley’s History of the DC Universe series. In that book, he takes under-utilized black heroes such as Black Lightning, Bumblebee and Mal Duncan, extrapolating their complete histories with real world events and posits their perspective on how their costumed careers have reflected their lives as Black Americans. It’s a book I’ve always hoped to write myself, and easily one of DC’s best published works in decades.

Regarding his Batman work, however, the prospect of him writing a Black Batman had made the news over a year ago with much hype. With “The Next Batman,” that hype is let down a bit by Ridley penning a more traditional, straightforward superhero story. Jace Fox  – formerly Tim Fox – has all the self-doubt, youthful energy and sublimated anger of many a young Black legacy character, and perhaps that’s what’s blunting my engagement. It’s by no means bad, but with the seal of interest in presenting a Black Batman – a Black counter version to a traditionally white icon – there are standard tropes of imposter syndrome that read as highly familiar to me, with little else going for it.

Here, we see Jace team up with his kid sister. How old is Tiffany meant to be again? She looks younger than Damian. This Future State is an alt. continuity, so it matters less, but her cocksure voice is more determined and less gleeful than the brief appearance we had of her in Gail Simone’s final Batgirl story. Some context was missing with her personality here.

There’s not much to this story, which doesn’t make it bad. Coipel’s artwork is solid, and Ridley’s prose is fine. It’s no more than the sum of its parts. I do wish that this Jace Fox endeavor be part of the main continuity, so he could be fleshed out more. As it stands, his development as Batman feels like its on a Black hero variant speedrun.

Story #2: “A Kingdom of Thorns” by writer and artist Bilquis Evely

Synopsis: In a distant land, a powerful, plant-powered entity (Poison Ivy maybe?) had taken over the realm. The creature’s powers include conquering thought and closing off the town in gigantic vines. Only a sole knight in Bat-Armor stands to stop her. Despite the creature’s best attempts, the knight’s mind cannot be read, and he keeps coming through her fortress of vines. At last, the knight makes it towards the creature, where he became most vulnerable. Although he slashed his sword valiantly, the creature was too much for him, and he succumbs to her power. As he dies, the creature questions his strength, finding a light inside him. This light, she describes, was the missing part of herself. With the light now hers, she resurrects the knight and releases the city.

Analysis: This was a tricky story to work out. The details are sparse and you can only make so much out of what’s actually going on. But this is also what Batman: Black and White affords the storyteller, a chance to weigh creativity over comic book convention. I think that’s Poison Ivy as the creature, but I’m unsure about the spark Batman had within him that Ivy takes with her before reviving him. Was it humanity? Heroism?

It was not a straightforwardly told story, to say the least. But in opposition to Ridley’s story, the ambition and confidence in scripting had me appreciating it more than understanding it, so the appreciation went far.

Story #3: “I Am The Bat” by writer and artist Bengal

Synopsis: Watching over the city of Gotham, Batman ponders the purpose of life and the teachings of Father Wayne. Spotting a gang shootout on the streets, Batman swings into action, easily taking down the crooks while remarking that the true legacy of evil in Gotham belongs to the famous members of Batman’s classic rogues gallery. Noting that they’ve not made their appearances yet, Batman reaffirms dedication and living up to her father’s love for the city and ideals. Her father…was Bruce Wayne.

Analysis: Bengal’s artwork on a couple of Burnside-era Batgirl stories was a highlight a few years back, and although I confess his style didn’t strike out at me without color, it was enjoyed all the same. He employs a manga-esque dynamism to his work, and Batman always looks good with manga influences in my opinion. Not much else to report on the story aside from the swerve at the end, although the context clues leading up to the twist ending were played with fairly. Short but sweet.

Synopsis: Two men, the Malkin Brothers, run into Batman in the Gotham Cemetery. Batman is soon joined by Etrigan the Demon and Raven, who let the men go. Zatanna arrives, and Batman asks why her friends didn’t apprehend the Malkins, who work for Black Mask. Zatanna replies that Black Mask has been in prison for nearly twenty years, and that those Malkins were restaurateurs. The fact is…Batman’s long dead. After being shown his grave, Batman asks about the nature of his death and wants to see his sons, Dick, Jason, Tim, and Damian. Zatanna denies him this, which Batman accepts. She guides him to think about the very first thing he wanted as a child the moment he lost his parents, which were his mother and father being alive. She grants him this wish by presenting their graves, and in a puff of smoke, Batman departs. Etrigan says that Batman’s appearances always creep him out, and when Raven questions this, Zatanna explains that Batman always haunts Gotham on the anniversary of his death because Gotham has always haunted him.

Analysis: This was a pretty cool story that would be great for a Halloween feature. Short, to the point, and both creepy and sweet, Seeley and Jones know Batman and deliver a tale in fine fashion. Jones was a mainstay of the latter 90s era, and while his extreme, gothic style isn’t for everyone, it’s inarguable how pitch perfect it was for this story.

Synopsis: Sometime in the future, Gotham is in ruins, overrun by giant mecha robots. As the city is bedeviled by one, a Bat-Mecha appears and destroys it, followed by another one. Seeing the loss of life from the preceding battle, Bat-Mecha goes to the moon and breaks into a type of sanctuary where well-to-do men and women enjoy comfort away from Earth. As the One-Percent recognize and welcome Batman, who exits from the Mecha, Batman maintains that his legacy is not defined and that his work against corruption endures.

Analysis: This was the toughest to work out, tougher than Bilquis Evely’s story. There’s hardly any dialogue save for the last couple of pages, and the events happen so fast that they almost require more than one reading. Yet at the same time, it is very cool to read. The Bat-Mecha evokes the classic late 80s manga time period of Akira and Ghost in the Shell, with a little Gundam Wing thrown in with the Bat-Mecha wearing a cloak a’la Sandrock. It’s an interesting notion that in an apocalyptic future brought on by class warfare, Batman would side with the 99 percent against the better off. Especially considering the 101 understanding of Batman is the conflict between his privilege and the people he fights, who suffer from mental illness. This kind of abstract storytelling is both a little frustrating but can also be fun trying to figure out.

Batman: Black And White #3 delivers five very unique Batman tales that explore the meaning and idea of the character. These abstract interpretations are mostly entertaining, and some require more than one reading.