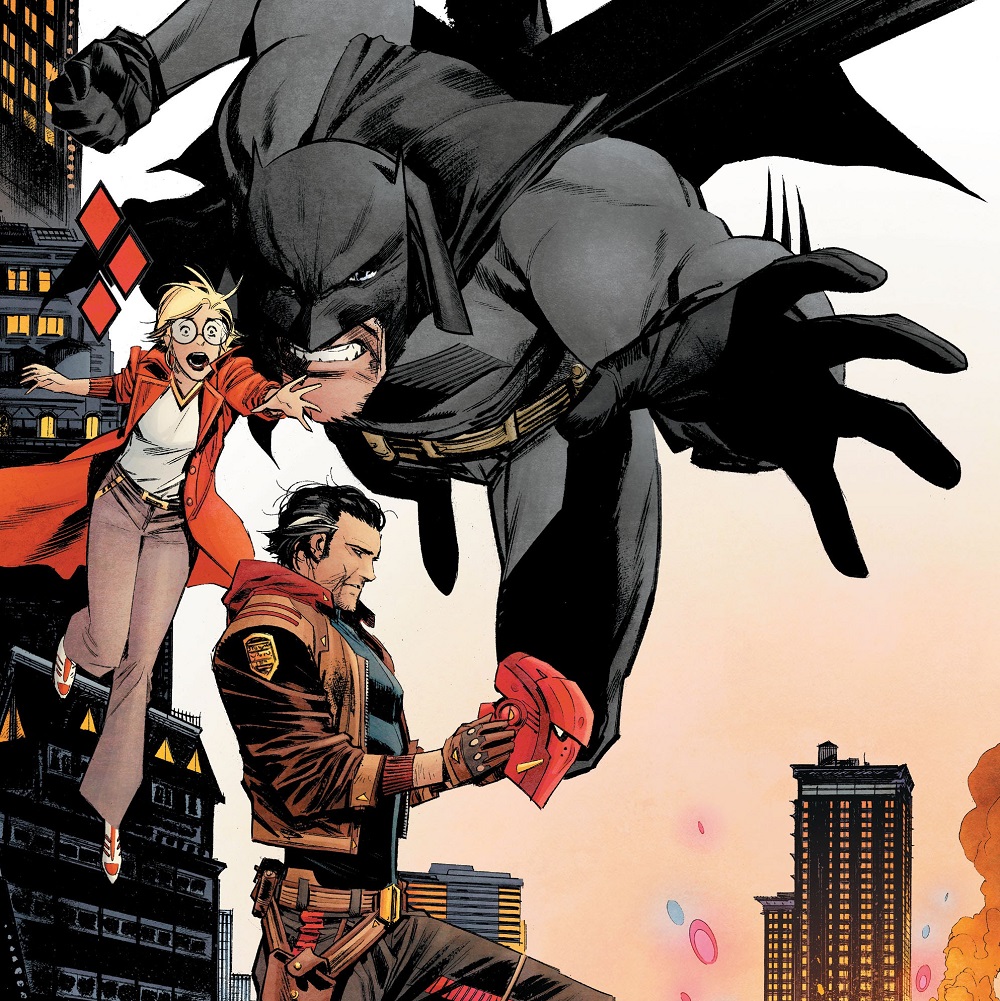 Synopsis (spoilers ahead): Hector Quimby apologizes as he fires his pistol at a trapped Harley – but to everyone’s surprise, he shoots the straps strangling Harley, and holds Starlet, his old nanny Ethel, under cover. Starlet and Hector exchange verbal arguments, then Harley tries to help, but Starlet knocks her out with a powder as the Producer watches. Hector refuses to go with the pair of villains and calls for help from the GTO.

In her drugged state, Harley remembers the first capture of the Joker in Arkham Asylum, as she meets this personality of her lover for the first time. Joker proclaims he loves Harley too, but gives her a card with a message from Jack as well, inspiring Harley to become the Harlequin sidekick.

Waking up in her house, Poison Ivy is visiting, giving Harley a little information, and advising her to embrace all parts of her past and personality, or be destroyed like Jack/Joker was. Duke arrives, and Ivy vanishes, while Harley learns that Hector has quit the case. Harley takes back her life, mothering her twins, as Starlet readies herself for battle. She watches in an alley outside of Harley’s house as a gas explosion blows up her apartment.

In prison, Bruce Wayne sees the news of the explosion and immediately tricks Jason Todd, the captain of the prison guard, and his former Robin, so he can escape to help Harley – and also sees Jason’s Red Hood mask and spare uniform, using it to escape.

In the blazing house, Harley has one of her twins and searches for the other but is injured. Her hyenas split up – one dragging Harley and her child outside, while the other searches for the remaining baby. Bruce arrives on the scene, and Harvey Bullock recognizes him, stopping him from making a move and increasing his prison sentence. Lou the hyena saves Harley’s second baby but dies in the act.

Analysis: The first few issues of this spin-off miniseries felt a bit stretched out – not quite enough happening per issue. But this issue is just full enough – it starts by resolving the cliffhanger from last issue and setting up some nice character motivation for the finale next issue. It then segued into very nice character work and a very emotionally intense issue climax, with the question of “will Harley’s twins survive” foremost on my mind. I can’t imagine that Harley will take an attack on her children and the death of one of her hyenas calmly – Starlet and Producer have really brought down fire and destruction on themselves.

Speaking of Starlet, her motivations are nicely rendered, though the Producer still feels quite hazy in terms of backstory and motivation – hopefully he will either become a major character in the next arc of the White Knight universe or will have some major time devoted to him in the next issue. Scalera and Collins’ Poison Ivy is a really interesting and beautifully rendered character. Her bitterness at Harley’s choice to side with Batman is complicated by her continued care for those she considers friends, and Scalera gives her a very appealing sense of humor and expression. There’s a bit of a feeling that the Bruce Wayne and Jason Todd scenes are not really necessary for the story, more setting up material for later in the ongoing White Knight universe, but Bruce’s concern for Harley and his exchange with Bullock are quite nice to see, especially given how cold Batman has been in this universe in general. All in all, this issue provided really excellent character work all around and nail-biting action scenes.

Matteo Scalera, in addition to the beautiful rendering of Poison Ivy mentioned above, continues to make White Knight: Harley Quinn one of the most beautiful books on the shelves. The color is so rich, never overwhelming, but perfectly judged, and the linework is such a brilliant blend of appealing and consistent, telling the story so intelligently and creating such a blend of tension and connection to characters. Whatever else it means, the White Knight label has come to be synonymous with artistic excellence, from Murphy’s series-defining work, to Klaus Janson’s flashback Von Freeze issue, and Scalera’s brilliance. I hope that if the White Knight universe continues to expand, Scalera continues to be part of it, as he’s so clearly earned it.

Our main cover of Batman: White Knight Presents Harley Quinn #5 by Sean Murphy and Matt Hollingsworth is a bit strangely composed – Harley’s desperate figure on the far left of the image overlaps the giant Batman’s gritted teeth expression oddly. Jason Todd putting on the Red Hood helmet takes over the bottom of the cover, with a contemplative look down. Matteo Scalera’s fiery variant cover featuring an image of Harley’s family photo (including the hyenas) being overwhelmed by flames both directly and symbolically reflects the climactic events of this issue, with scalding hot colors and brilliantly chosen details.

The penultimate issue of White Knight: Harley Quinn increases the stakes and emotional payoff of this little spinoff that grew into its own story in a very organic fashion, giving us a real sense of intensity going into the finale of this very well-crafted series.