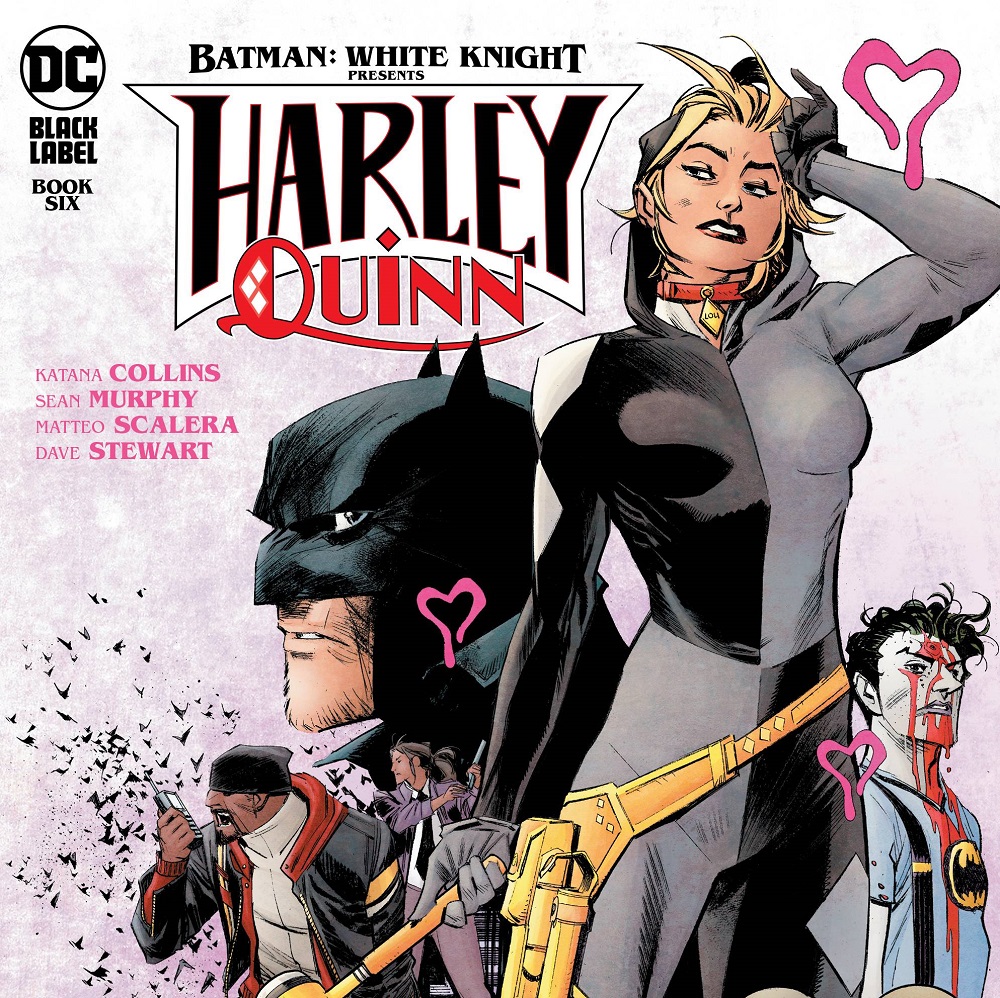 Overview: In Batman: White Knight Presents Harley Quinn #6, we see the dark and violent conclusion of Harley’s battle against the Producer and the Starlet!

Synopsis (spoilers ahead): The story opens with a flashback of Harley Quinn stopping Joker from torturing Jason Todd, the first Robin (in this universe), in a violent fight, aided by her hyenas. When Joker refuses to see reason, she leaves him, swearing it is for good and goes directly to Batman.

In the present, Harley sits in the burned-out husk of her home, mourning her hyena Lou, then leaves, quitting the GTO to take on the Starlet personally. She meets Batman, still free after his jailbreak from the last issue, and Bruce gives her a new costume, based on her old red and black suit, but in grey and black, with serious armor components, complete with a new mallet weapon. She adds Lou’s hyena collar in tribute to her dead pet.

At the Gotham Film Academy festival, Duke confronts Harley and gives her a headset to keep in contact. However, the Producer hacks the GTO’s comms, having killed the control room team, leaving the coast clear for Starlet to attempt to kill Hector’s mother as she receives her award on stage. Hector tries to stop Starlet but is taken hostage as she escapes through a trapdoor. Harley chases after them, leading to an intense fight, where Starlet’s knife bounces off of Harley’s armored suit and into Hector’s chest, killing him. Harley beats Starlet with her expandable mallet, and the GTO arrests the murderer. Commissioner Renee Montoya tries to convince Harleen to come back as a profiler again, rather than a crimefighter, but she remains on the fence. Bruce has bought her a new place to stay, and a new hyena cub, and the story closes with Harley, her twins, her hyena, and her new cub smiling together in peace, as she promises to make Batman proud.

Analysis: And here we go! Katana Collins and Matteo Scalera wrap up the first spin-off of Sean Murphy’s White Knight universe (or Murphyverse) with a bang and a heartfelt smile in Batman: White Knight Presents Harley Quinn #6. Completely in keeping with the development of Harley Quinn as a powerful, intelligent, and heroic character, this miniseries finishes out with her getting her own heroic costume, though it doesn’t try to make a clean break with the past or the difficulties of her life, with her children and psychological baggage. The killing of Hector Quimby was a bit unexpected, though it does free Harley from a potentially awkward love triangle in that direction since the Harley/Bruce romance threads continue to be pulled on quite hard. All in all, though the series had some weak and inefficient moments in the earlier issues, Collins seems to have figured out how to tell a tighter story with solid action beats by this finale, and it provides quite an effective emotional punch, even as it set up seeds for future stories with Batman once again being free from prison and Harley now having a heroic path in front of her.

It’s become a regular feature of these reviews, but Matteo Scalera’s art is simply phenomenal. Sean Murphy’s angular, beautifully laid-out pages were of course one of the biggest draws to the first two White Knight miniseries, but Scalera manages to combine the general design philosophy of Murphy while still being recognizably his own artist and producing incredibly gorgeous character work and paneling of his own. Dave Stewart, a master colorist, continues to provide intense and rich hues to Harley’s chaotic but warm and loveable world and the cast of characters. Hopefully, if more spin-offs appear, Scalera and Stewart will continue to provide their excellent work!

Our final covers for the series are once again truly gorgeous. Sean Murphy’s main cover shows a Harley in her new grey hero suit, oddly with the compact version of her hammer, expressing a very uncertain emotion as she contemplates heroism, with most of the cast on the cover, as well as a film camera hinting at the villains. Matteo Scalera’s variant, once again using a wider and richer color palette than Murphy and Hollingsworth’s muted red and black look, is a humorous composition with a nonetheless contemplative feel, a twist on Batman on the gargoyles over a blue and shining from within Gotham City in the rain. Harley’s grey hero costume stands out a bit more, especially the diamond card motifs on her arm and leg, she has the expanded and more threatening version of her mallet over her shoulder, and a yellow holster and thigh belt provide a nice contrast to the simple lines of her jumpsuit, made more prominent because of the blue background. Once again, those who wish to only purchase one cover have a hard choice on their hands, given the excellence of both!