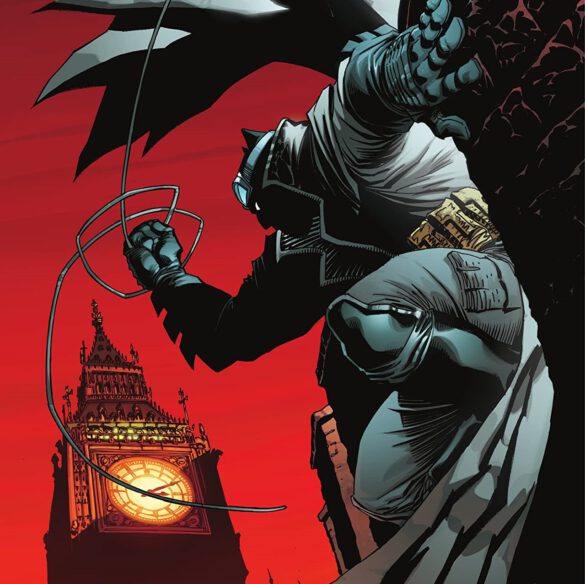 Overview: In Batman: The Detective #1, Batman wears a striking new costume to investigate a brand-new enemy which leads him on a European adventure.

Synopsis (spoilers ahead): Over the skies of Lancashire, England, a Wayne Airlines aircraft soars over while a flight stewardess leaves her attendants. As she pulls open the overhead compartment, she pulls over a white Batman mask, regarding that “[it was] Batman’s [fault].” The aircraft then proceeds to explode as more people in Batmen masks pop out to escape it.

We then cut to a woman by the name of Beryl Hutchinson, also known as the Knight (formerly Squire), with Ace alongside her, fighting the woman in the mask. The Knight crash lands and explodes to bits with Batman relaying that it was all his fault.

Bruce is then shown in his Batcave, old, ragged, and beaten. He exudes his mission, his will, and his passion to fight crime. However, he notes that “the pain doesn’t fade like it used to.” Did Batman truly make a difference? He questions himself as he watches the explosion of the aircraft with “Batman 147” plastered on the castle. This Batman is different. Alfred died a long time ago, the Bat-Family is nonexistent, and Gotham stays unsafe. The profession prevents him from leaving Gotham. He embodies Gotham. However, Bruce has had enough. He leaves Wayne Manor for the last time.

Batman arrives in Lanchester in a surprisingly different costume. Wearing goggles on his cowl, he lets the wind blow his cape as he stands over the landscape. As Batman meets with the new Squire, he scans the land. Gentleman Ghost makes a dastardly appearance, to which Bruce points out that he had radically changed. With a spare set of gloves, Batman is able to beat the Ghost, remarking that “he had enough ghosts haunting him.”

To his surprise, Beryl, the Knight, had survived the helicopter explosion. After a quick conversation, he reveals that a group of people in white Batman suits were after her. In spite of the confrontation, Batman had revealed that someone was taking the lives that he had saved.

Analysis: Tom Taylor does a nice job of giving this semi-apocalyptic Bruce a harsh voice for the world he lives in within Batman: The Detective #1. The brooding Batman represents everything this character should be in this scenario. There is enough care in him for you to sympathize with this version of Bruce, but at the same time, the pain is too great to ignore. It is a great balance between pain and empathy.

However, we get less than enough time with the supporting characters to connect with them. The new Squire and Knight do remind me of Grant Morrison’s versions of those characters, but the character beats are few and far between.

The highlight of the book is Andy Kubert’s pencils. The great Andy is the same man who penciled Damian Wayne’s introduction to the DC Universe in Batman and Son. His expressions on Bruce as well as his art style are perfect for this “Batman in Bethlehem-style” first issue. Brad Anderson does a great job highlighting Andy to paint a picture of Lanchester, England.

With a Grant Morrison-esque vibe, Tom Taylor starts off well with an issue that cameos plenty of interesting characters to create what should be an intriguing investigative story.