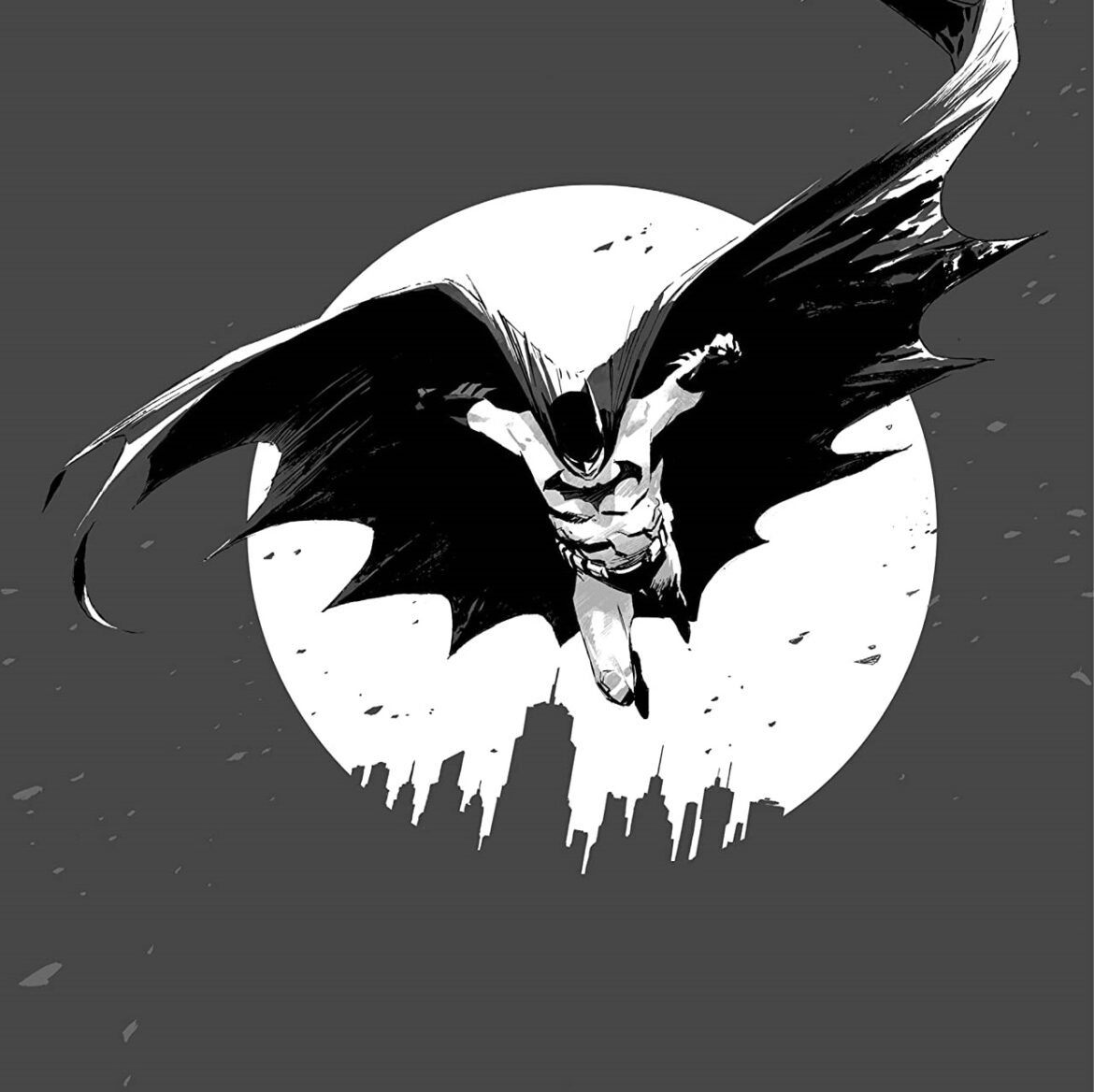 Overview: In Batman: Black And White #5, Batman calls upon readers to aid in the capture of the Riddler and Killer Croc, while Damian Wayne, Dick Grayson, Commissioner Gordon, and Gilda Dent are featured in their own stories.

Synopsis: Bruce Wayne chides a slower-paced Damian Wayne as the two ride bicycles up to a spot beneath a bridge in Gotham City. When they come to a stop, Bruce tells his son that there is going to be a drug deal here this evening. When Damian asks why they’re here so early, Bruce tells him that they need to prepare.

Bruce explains how they’ll go about taking down these thugs, pointing Damian in the direction of where he’ll sit to wait for Bruce’s signal, wherein Bruce will cut the lights. This will give Damian the opportunity to take out a few goons, and when the lights come on, it’ll disorient the remaining drug dealers. As Bruce contemplates how to make a grand entrance as Batman, Damian asks why they can’t just beat the crap out of the thugs.

Bruce reiterates the necessity of instilling fear in the thugs, ensuring that they’ll fear the idea of Batman. It’ll put them in panic mode, so they’ll try to flee, as well as reinforce the legend of Batman before they’re apprehended. Once Bruce finishes explaining the setup, the two head home to rest.

Later that night, Batman and Robin are in position as the thugs show up to make an exchange. Batman notes that there are more people than he anticipated. As he gets ready to signal Robin, Damian jumps into the fray to clobber them all. Batman sits against a wall, cradling his head in his hand. A slight smile tugs at his cheek.

Analysis: Batman: Black And White #5 opens with a light and fun story between Bruce and Damian by Jorge Jimenez. The story is a cute back-and-forth between father and son, highlighting their differences not only in dialogue but in shading and actions.

The juxtaposition is quite literally everywhere. When the duo are on their bikes, Bruce is sporting a black Wayne Tech shirt while Damian is wearing a white Wayne Tech shirt. When Bruce is discussing how he’ll make his grand entrance as Batman, Jimenez gives us a full-page panel of a cloaked, Batman-shaped form descending through the darkness, crying out, “Because I’m Batman!” In reality, the reverse happens, and it’s a fully illuminated Robin screaming out, “I’m Robin!”

This motif is a fun way to play on the theme of black and white in this opening story, using it as a way to explicitly portray the dichotomy between father and son. Perhaps it’s a little on the nose, but the cute banter between the two makes this a joyful read that highlights a much-loved dynamic between Batman and Robin.

It’s also great to see Jimenez taking up writing duties with this story. The dialogue, albeit to the point, has just enough character that it feels natural and organic for the characters.

Synopsis: On top of the GCPD, Commissioner Gordon waits near the Bat-signal with two other GCPD officers. He has a note in his hand, one indicating a location – Ball Road. Gordon contemplates the overuse of Batman as a weapon of fear when respect for law and order just won’t do. After the other officers leave, Gordon leaves the precinct, without having summoned Batman. He’s been getting notes lately, and it relates to a cold homicide case that’s thirty years old.

As the two officers try to investigate the significance of Ball Road, Gordon reveals that he’s not driving home; he’s headed toward Ballard Industries, the real location indicated on that note. This case pertains to an old mentor of his, a crooked one that betrayed him. As he enters Ballard Industries, Gordon finds this mentor, withered, old, and tired. A cross sits on a wall behind this former mentor, implying that perhaps the man has been sending the notes as a way to repent. Gordon initially enters with his gun drawn, but he lowers it.

Outside, Batman is waiting for the commissioner. An officer back at the station alerted the vigilante. Batman asks Gordon if he found what he was looking for. Jim says he found what he needed. Through internal monologue, we see that Gordon came looking for vengeance but found mercy.

Analysis: This is a tricky story to understand, as Lee Weeks plays it pretty vague with what’s going on here. Though difficult to glean, the actual details of the case don’t necessarily matter. It’s the theme that Weeks is trying to get across, which seems to be the difference between Batman and Jim Gordon. Batman is the embodiment of vengeance, whereas Jim, by this story’s end, is a man who had every reason to turn to vengeance. Instead, Jim chooses mercy.

We see this mercy in the sadness exchanged from the old mentor’s face and Jim’s. Gordon comes in gun drawn, but when he sees the remorse and regret in his old mentor’s eyes, his demeanor changes, and he lowers his gun. In the panel immediately after, a cross is depicted above the mentor’s head. This could be symbolic of Gordon keeping his faith, as well as indicative of an old man finally repenting. In Jim’s case, this is the commissioner holding onto his hope, grace, and mercy.

The art in this story is incredible, but readers should expect nothing less from Weeks. Weeks excels in conveying complex emotions in the facial expressions of his characters, building complicated themes and notes to leave readers with. The story gets a little confusing with the narration, but the meaning is there. It’s all over Gordon’s face.

Synopsis: At a bar, the Electrocutioner and his friends celebrate the Electrocutioner’s impending marriage. The bartender serving them watches on, revealing through narration that she once jumped into a marriage out of fear of becoming an “old maid.” It’s revealed that the bartender is Gilda Dent, and she recalls how, when love is young and new, people often see each other for how they want to be seen, not how they really are.

Gilda fears for the Electrocutioner’s bride-to-be, and after the celebration turns sour with the Electrocutioner assaulting one of his guests, Gilda takes matters into her own hands. She follows the low-level villain into the alley and shoots him, absolving herself of vengeance by saying that women like her are too often casualties in this game.

Analysis: This short story in Batman: Black and White #5 is quite a surprise, and writer Mariko Tamaki doesn’t mince words here with its meaning. The story really goes for the after-effects of what happens to women in this world. From Gilda’s perspective, women are taken for a ride, only allowed to awaken from the ride when something violent careens into their orbit and dismantles the facade.

In keeping with the characterization of Gilda from The Long Halloween, Dent’s ex-wife murders the Electrocutioner by this story’s end. Gilda justifies this as a gift to the would-be bride, sparing this young woman from Gilda’s own fate.

It’s nice to see Gilda pop up in a story again, even if it’s only this very brief narrative. Tamaki and Lupacchino’s depiction of her adds a layer of sadness to Gilda’s turn as a “holiday” killer, weighing her down with a lifetime of strife and subjugation, first from her mother, then from Harvey. One can only hope that Tamaki carries this depiction forward in her current Detective Comics run, which would serve to reinforce the themes and ideas she and Lupacchino are playing around with in this short story.

Synopsis: Batman must chase the Riddler and Killer Croc into Riddler’s Un-Maze in order to thwart their evil plans. This story is a riff on the classic Choose Your Own Adventure book series for kids. In this version, most endings result in Batman’s death at the hands of either the Riddler or Killer Croc, and solving this “riddle” isn’t as simple as choosing between numbered panels to move forward in this series of puzzles.

Analysis: Kieron Gillen and Jamie McKelvie deliver a fun little game to Batman: Black And White #5 in this Riddler-centric story. It’s cute, frustrating at times, fun, and quite the brainteaser. As noted in the synopsis, you can’t solve this un-maze by simply following the numbers listed in the panel boxes. There, perhaps, is another riddle hidden within this story. Of course, readers could always cheat, which would be very in-line with how the Riddler usually crafts his twisted games.

Story #5: “The Man Who Flies” by writer and artist Jamal Campbell

Synopsis: Nightwing reflects on the meditation lessons Bruce Wayne taught him during his Robin years. As an adult, meditation isn’t enough, so Nightwing lets the pull of gravity and grappling through Gotham City bring him the peace of mind and the fortitude that he needs.

As Nightwing swings around, he reminisces on his origins and his loves over the years. Happy memories and sad ones flutter through his mind, and Nightwing thinks on the expectations of carrying through with a legacy as well as the failures in his career. He reaches a building where a bunch of people are slaughtered. Nightwing finds a child still alive and embraces him. He reflects on being a guiding light to inspire us all, on rising above and flying higher than any darkness can reach.

Analysis: The final story in Batman: Black and White #5 is more of a poem in a sense than it is a story, an idea of what it means to be Nightwing than an actual caper. And that’s perfectly fine. Jamal Campbell delivers both poetic prose and some of the most gorgeous art in this issue. The sweeping shots of Gotham City are absolutely incredible, and they’re reminiscent of classic German Expressionist films that inspired the Noir genre, of which Batman takes some of his roots.

“The Man Who Flies” is a solid character piece, and it’s a great story to close out this issue, as it weaves into darkness and glides out, leaving readers with a message of hope and inspiration in the face of everything. It’s beautiful. Elegant.

Batman: Black And White #5 is an interesting collection of stories that aims to give us themes or social issues to consider, as well as a unique “game” of sorts with an inspirational finish. It’s both challenging and fun, adult and gleeful. This depiction sounds like the issue is all over the place tonally, but it mostly works in delivering a solid assortment of Batman tales.